Tuesday night saw a large gathering of Jewish people (and supporters) who came out to protest against anti-Jewish racism in the Labour party. It was an unprecedented show of disquiet from a community that clearly is unsettled by the persistent connection between Labour Party leader Jeremy Corbyn and ‘pockets’ of antisemitism both inside the party and out. As someone who has been researching these pockets for years, I believe their fears are justified. Many of those present had never been to a demonstration before.

To prove the point for the demonstrators, a small band of pro-Corbyn activists actually turned up to counter an anti-racist demonstration. The organisers were the group Jewish Voice for Labour, that was created inside the Labour Party to help deflect accusations of antisemitism. This advert for the event was shared inside the antisemitic Facebook Group Palestine Live: 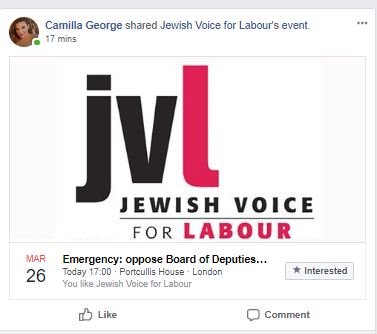 So was this one:

And yes, Elleanne Green, Founder of Palestine Live, turned up with JVL to counter a demonstration about antisemitism: 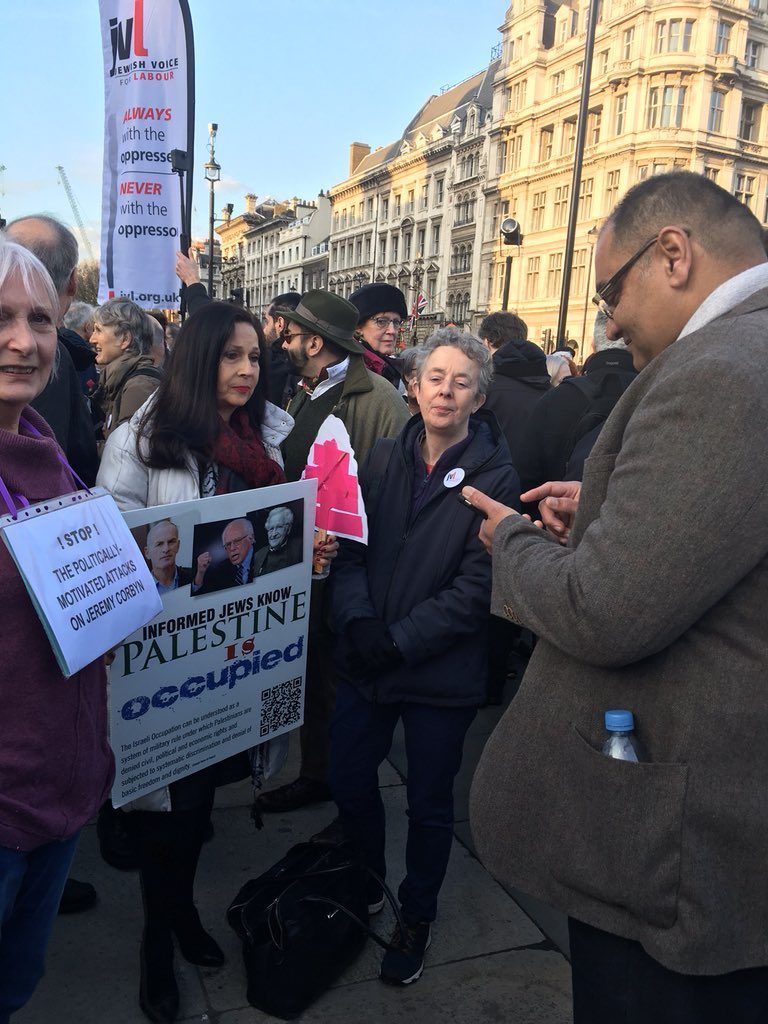 Had a group turned up to counter an anti-racist march, or people protesting against anti-Muslim hatred, most people would have been rightfully sickened. However, that near-universal rejection of racism does not include the Jews.

The Jewish demonstration has been accused of being an attempt at political manipulation. It is seen as a Tory backed attempt to discredit Corbyn and of being a way of trying to stifle criticism of Israel. Or in other words, Jews were out in numbers to deceive people again, presumably because that’s what these people think that is what Jews do – make up stories about racism to manipulate politics.  This antisemitic mindset was given some legitimacy in many media outlets and given far too much airtime on both the BBC and Sky News

How is it that unacceptable racism is becoming so normalised in a mainstream party and by extension within wider society? Much of the problem is down to ignorance and populist sound-bites, after all, isn’t that how race-hate always spreads?

To be an ‘anti’ something, requires a clear definition of what that ‘something’ is. If that explicit understanding does not exist, then a line of ten people opposed to anything, will become a line of ten people opposed to ten different things. Even if they all think they are of the same mind. Such is the issue with anti-Zionism. If you ask most people what being an ‘anti-Zionist’ is, they will reference opposition to Israeli actions in Gaza or the West Bank. That isn’t anti-Zionism. There are Zionists who oppose current Israeli military activity, settlements, Israeli policy in Gaza, social injustice in Israel, Palestinian child prisoners and house demolitions. Discussions over all these issues takes place daily within Israeli society.

Criticism of Israeli policy is not anti-Zionism, nor is it at the heart of the antisemitism problem. This is a myth being spread by those who gain by the conflation. And there is far too much of it about.  This is a perfect example. A disgraceful tweet by an absolute idiot: 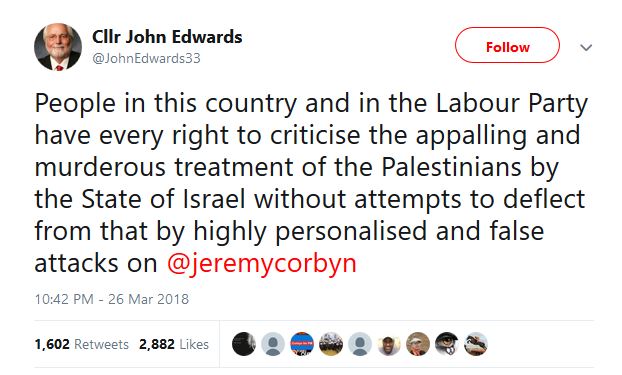 Put aside the feelings about John Edwards analysis of the conflict. Edwards has every right to sympathise with Palestinians and to focus on his descriptions would be an unnecessary distraction. Edwards has entirely conflated anti-Zionism with opposition to Israeli actions in Gaza and the West Bank.

So when I complain about racism from people who think Zionists control the world, Edwards’ conflation actually protects that racism. His tweet is instantly popular (because so many are lost in the same game). Edwards may even be a real anti-Zionist, and may personally want to see the Israeli democracy destroyed, but that is not what his tweet says. Whichever way this is played, there is an obvious and clear conflation. Is he someone who supports two states conflating anti-Zionism with criticism of Israeli policy, or is he an anti-Zionist hiding behind criticism of Israeli policy? It is that blurring of the lines, that is a primary reason for the spread of antisemitism into the mainstream.

In his tweet, Edwards is helping racism spread by blaming a minority group who claim to be victims of making it all up.

Far too many people are dismissive of racism, and the phrase ‘anti-Zionism is not antisemitism’ is repeated on mass by people who cannot define either term. What results is a fake anti-Zionism ‘tap-dance’. The dancer makes moves to a tune, neither understanding the notes or the meaning of the tune he is dancing to.

A message to the media

Why do anti-Zionist Jews receive so much media coverage? The biggest offenders seem to be the BBC, but Sky, the Guardian and of course individuals such as James O’Brien at LBC Radio are all serial offenders. O’Brien is one of the worst on air at the moment, because he thinks he can tell the difference, but in reality the combination of his arrogance and his ignorance has a devastating affect.

It doesn’t matter whether there are 6 anti-Zionists who still identify as Jewish (0.002% of the UK Jewish population), 60 (0.02%) 600 (0.2%), or even a highly unlikely 6000 (2%).  We can visibly see by the appearance of the same few faces, the same players in each group, and the FACT that if their material is shared at all, it is shared primarily by non-Jewish Corbyn supporters, that these people simply do not have a community behind them. They represent antisemites far more than they do Jews, and mix with people who share horrific antisemitic material. They do this and with a straight face to camera have said they have never seen any antisemitism. So why are they given so much airtime?

When there clearly is an issue of antisemitism, why do you give a Jewish person a microphone to say there isn’t? Nobody else could fill that role, so should it be filled at all? They do not represent Palestinians, nor do they represent Jews. The only function they have left is to be used by the media as a weapon to goad British Jews. What other justification can there be for Sky, placing an MP like John Mann on TV, sitting opposite someone who because of blind ideology, cannot differentiate antisemitism from cotton candy?

This tiny cult are not responsible for the airtime they are given. They are seasoned campaigners. These people were comfortable in the antisemitic Facebook Group Palestine Live. They have just organised a counter-demonstration to an anti-racist march. Elleanne Green the founder of Palestine Live was even there. This isn’t rocket science. They are weaponsing their Jewish identity to attack Jews. The media are responsible for giving them this platform and for legitimising their argument. And the actions of the British media to date have been a disgrace. Every time I tune in to a news report, I see one of the 93% sitting opposite one of the cult, as if they are equals, smugly suggesting Jewish people are making up claims of racism.

An insult to British Jews

It is a direct insult to the 99.998%, 99.98%, 99.8% or 98% of the Jewish population who are not being represented. More importantly, it is to spit in the face of the 93%+ of Jews who actively disagree with the views of this small cult, and it gives an infusion of adrenaline to antisemites desperate for legitimate cover.

This cult are eerily similar to the Russian communist Yevsektsiya, an arm of the Russian propaganda, who set out to ‘destroy traditional Jewish life’. So what steps have the BBC, Sky, the Guardian and James O’Brien taken to ensure that they are not acting as mouthpieces for such a group? Have they done anything? Or is spirited debate ALWAYS WELCOME when it comes to racism? Will they place far-right people on a chair in their studio, every time there is a victim of anti-black racism or anti-Muslim hatred? How would that be received?

The problem of course is fueled by the deliberate confusion created in conflation. All it takes is one person, one, in a studio, media department, union, school, council session or strategy meeting, to utter the words that ‘anti-Zionism is not the same as antisemitism’, and we are back on that slippery slope. These have become empty terms used by people who do not understand them, that have allowed anti-Jewish racism to become normalised in our society. This mantra is of course promoted and propagated by groups like JVL who benefit for all the confusion they manage to create.

In any normal situation, society would rely on the victims themselves to define what they are and what they see as racism. With Jews that simply is not happening. Instead Jews are being accused of subverting democracy. Haven’t we all been down this road before? Surely now #enoughisenough