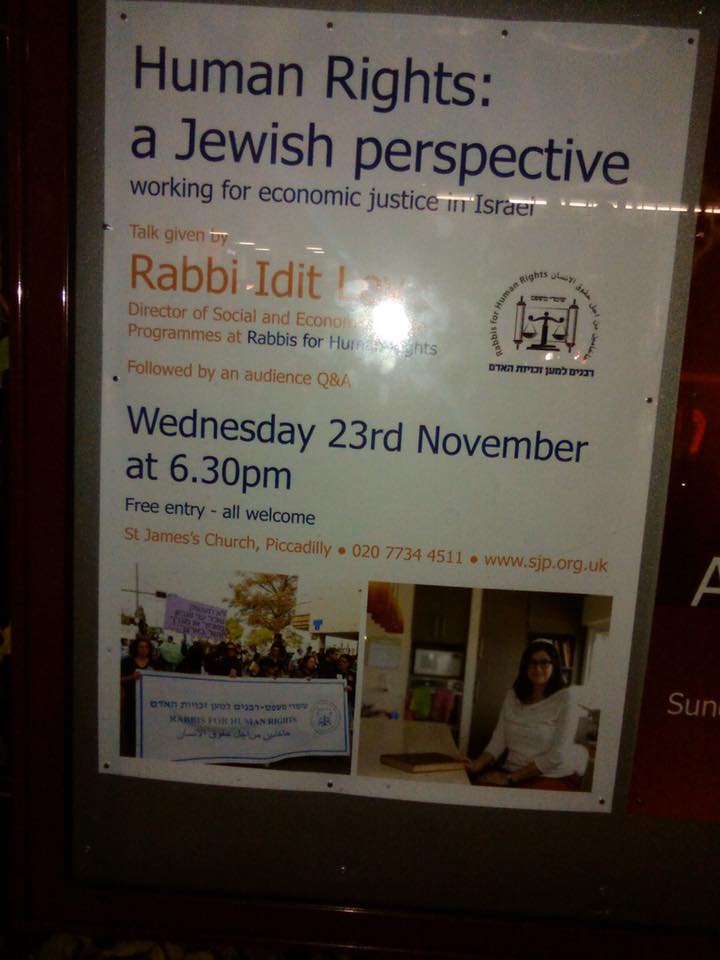 The intolerant, angry and aggressive Rabbi for Human rights 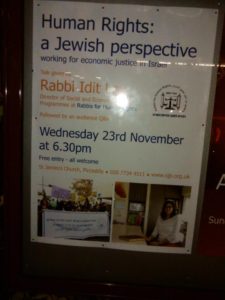 Have you heard the one about the Jewish Rabbi ‘for Human Rights’ aggressively pushing another Jew in a church?

It may sound like the opening line from a stand-up routine, but this is what happened as a speaker from the organisation came to join the modern church choir singing the age-old hymn, ‘oh Lord, let us all demonise Israel’.

This was at St James Church in Piccadilly. The same Church that in late 2013 decided to erect an ‘Apartheid Wall’ to send a message about Bethlehem. The vicar of this church is Lucy Winkett. Someone who has obviously acquired the label ‘friend’, recognised by all those who don’t like the Jewish state of Israel.

I hadn’t expected to be there. Just up the road Daniel Schueftan was talking at Kings College and there had been trouble expected. With security worthy of El-Al I decided that Kings had indeed created a fortress for the Jews to safely hide behind. I left campus and headed off to the church.

I was accompanied by Jonathan Hoffman. We were late, and missed much of the talk being given by Rabbi Idit Lev from ‘Rabbis for Human Rights’. There were only perhaps 20 who had come to listen. As we arrived someone was making a comment that indicated the talk had been as biased as was expected. “I had to say something because you are giving people the wrong impression about Israel”. These were the first words I heard directed towards the speaker.

We sat, we listened we asked questions too. Mine was the last. I spoke only to correct some of the bile that I had heard come from the Idit Lev’s mouth. I had missed much of the talk, but it doesn’t take long before you recognise the usual poison.

The moment the UK representative of Rabbis for Human Rights suggested their movement be considered non-political was a particular highlight. There were several distortions in quick succession. The general picture was that Israel is a nasty, brutal place.

I brought up the misrepresentation of her talk. Asked about poverty in the UK, investment in Arab Israeli towns and suggested she should think twice about demonising Israel at a time of growing antisemitism. As always, for me, context is key.

Following the event, Jonathan Hoffman went to approach the vicar about why this church constantly ends up with the ‘choir of the blessed demonisation of Israel’ singing loudly inside its walls.

Standing alongside the vicar in opposition to Jonathan was Sylvia Rothschild. Sylvia is another ‘Rabbi for Human Rights’ and the person I believe who assisted in having the event staged at St James.

Sylvia became aggressive very quickly and had no trouble physically pushing those she disagreed with. Yes, Sylvia Rothschild, a human rights Rabbi, became aggressive and pushed someone who had a different opinion to her.

Rabbis for Human rights protest at the way Israel defends its citizens, but turn aggressive and violent when faced with opinions they do not like. As we so often see today, the real face of the ‘hard left’ is anger, intolerance and violence.

Sylvia went on to accuse me of saying things I hadn’t. She dismissed any counter opinion and displayed another characteristic of the left, ‘mishearing’, which allows for all manner of baseless accusations. I had only spoken once, with a microphone, but had clearly become an ‘enemy’. She pointed me out and said she was ’embarrassed by me’. It was a sad performance by a sad little group. I was quite disturbed that a self declared human rights group could become visibly aggressive so quickly. This had been my comment.

When Rabbi Idit Lev talks, inside the room are people falling for the false narrative. The audience willingly laps up any decontextualised information or misrepresentation of Israel that can be used in the fight against the Jewish State.

Some that listen to those like Idit, are pushed over the edge, and they join the mob outside the room at the UCL. Soon they will join those banging on the windows and threatening me.  This isn’t Israel, this is 2016 Europe and anti-Israel rhetoric delivered to a crowd of people singing this hymn has consequences.

Please if you can, consider making a donation. Mine is an independent action and research is expensive and time consuming. Going to events is also expensive. Even producing just one of these piece does take days, sometimes weeks, and whilst I do what I can, there are serious constraints that impact on what is possible. Your assistance can and does make a difference.

90 thoughts on “The intolerant, angry and aggressive Rabbi for Human rights”