As I researched for an article about the demonstration and counter demonstration at SOAS on 27 April, I came across an essay on antisemitism by Stephen Sedley. Sedley is a former appeal court judge and the essay was just published in the London Review of Books. The essay dealt critically with the International Holocaust Remembrance Alliance (IHRA) definition of antisemitism.

The building block for the IHRA definition reads:

“Antisemitism is a certain perception of Jews, which may be expressed as hatred toward Jews.”

The definition was adopted by the UK government in December 2016, as part of an ongoing war against increasing levels of antisemitism. The IHRA definition logically accommodates a defence against ‘Israel as Jew’ manifestations of antisemitic activity. In turn anti-Israel activists, accused the government of ‘weaponising antisemitism‘.

What seems to be true is that antisemitism is being viewed as a serious battle and improved definitions are being deployed to fight against a defiant and flexible disease. So what on earth are some people doing trying to undermine these efforts?

The Sedley article is just the latest of a recent tsunami of attempts to discredit a newly deployed working formula. It is time to cast an eye on this dangerous strategy.

Sedley and a topsy turvy world

To understand the problem, you do not have to engage with more than the very first sentence of the Sedley essay:

“Shorn of philosophical and political refinements, anti-Semitism is hostility towards Jews as Jews.”

Using such a simplified definition is dangerous. It casts aside the entire discussion of mistaken ‘perception’. If Jewish people are just people, then any hostility towards a ‘people’ is not about how they actually are (in reality as Jews), but rather, how the antisemite perceives them to be. Or to be precise, any definition of antisemitism must also include ‘hostility towards Jews as something that they are not’.

Jew hatred is not rational, it is not built on science, but rather the fantasy of those who adhere to antisemitic thought and propagate it. It is why I am uncomfortable with legal minds using definitions of antisemitism as a battlefield for political expediency. When Sedley uses such a weakened definition as a method of protecting elements of anti-Israel activism, it turns antisemitism almost on its head.

The Sedley essay was not the first past the post though.

As the government announced its adoption of the IHRA definition, you could almost hear the scrambling of the anti-Israel groups clamouring to discredit it. As part of this panic, Hugh Tomlinson QC was instructed by ‘Free Speech on Israel, Independent Jewish Voices, Jews for Justice for Palestinians and the Palestine Solidarity Campaign’ to ‘provide an opinion‘ on the IHRA definition. 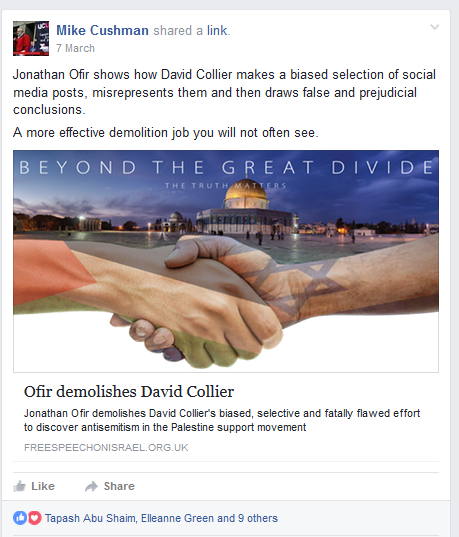 Cushman of course is from ‘Free Speech On Israel’. Notice also the two names we see as ‘liking’ the article, Tapash Abu Shaim and Elleanne Green. I have come across them both before. Let us deal with them one at a time. First Tapash: 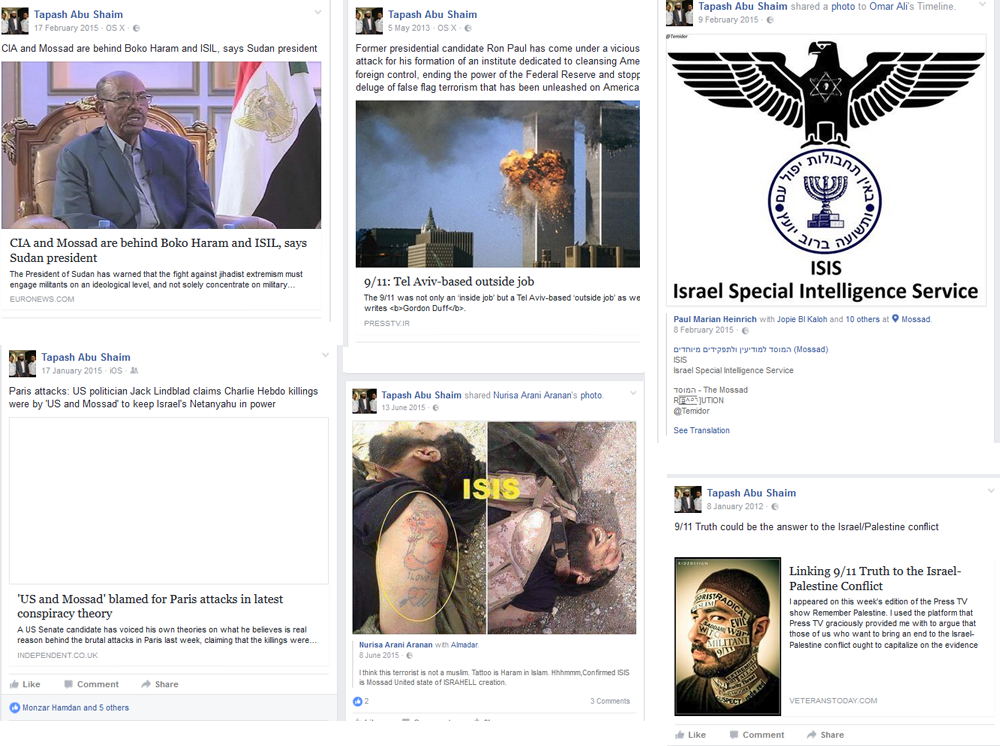 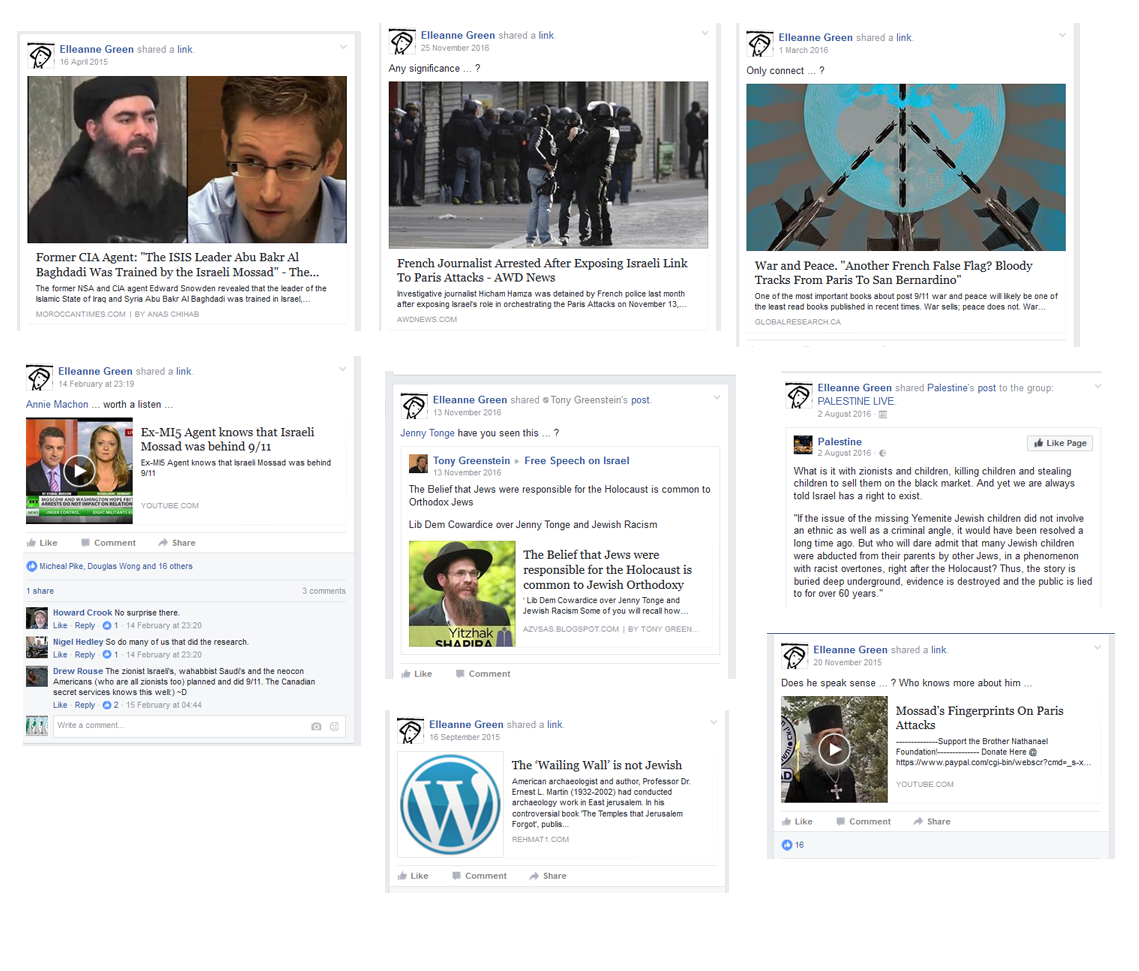 Tapash is (or was) a top table member of the PSC and apparently helped run the PSC stall at last year’s Labour Party Conference. Elleanne Green is also highly active. So what on earth is going on, that we have a marriage between ‘anti-Zionist Jews’, who seek to discredit all accusations of antisemitism, and who stand in unity alongside people such as this; actually defending them.

The essence of foolishness

Given there is a problem with Jew hatred, and given that Jews, like any minority, should be protected from those who seek to set them apart, society must takes the necessary action to shape that protection. This in essence is what the drive to find and support a working definition is all about.

So we therefore have three possible ‘pullers’:

It seems that the Jewish anti-Zionists are part of the third group, and are strengthening a very dangerous camp. Unless you can explain through some other reasoning, why so many hard-core antisemites have aligned themselves with the anti-Zionist cause, then *you have* to accommodate for the morphing of antisemitism into some anti-Zionist dialogue.

If you fail to accept that antisemitism can morph into anti-Zionism, you enter the world of the absurd.  Why on earth wouldn’t it? If like Stephen Sedley  you remove ‘Israel as Jew’ almost entirely from the equation, then you blatantly fail to protect Jews from those that hate them. So groups like ‘Free Speech on Israel’ end up standing in front of Jew haters, protecting the antisemites. They even align with infested groups such as the PSC, to try to find legal minds that will attempt to legitimise this action.

I have often engaged with anti-Israel activists and I give them a simple challenge: I ask for three examples of antisemitism involving Zionists or Israel. Rather than have them telling me what is not antisemitism, I have asked them to provide examples of what is. Despite asking this on scores of occasions, I have yet to receive a single reply.

So people who associate with these groups, who provide them cover, who promote their arguments, need to explain why it is that these ‘Jewish anti Zionists’ cannot answer a simple question.

Until they can provide examples, and appear willing to address the blatant antisemitism that clearly exists within their camp, they should stop trying to unravel the attempts of others to fight Jew hatred.

If this is that case at what point does anybody think we should take attempts from within that movement to belittle the definition of antisemitism seriously?

They can all stop writing about it and stop talking about it.  It is simply as if they are saying ‘please sir, let us hate the Jews’. Attempting to turn antisemitism upside down, so as to strengthen and empower the enemies of the Jews. We must understand this and fight against it.

Please if you can, consider making a donation. I believe that attacking the lies and distortion for what they are is important. I am willing to travel anywhere where the hate and venom is being spread. We need to be there to expose it. Mine is an independent action and research is expensive and time consuming. Even producing just one of these piece does take days, sometimes weeks, and whilst I do what I can, there are serious constraints that impact on what is possible. I have several projects to work on, some short, some longer term. Your assistance, like my research, can and does make a difference. Every contribution is greatly appreciated.

29 thoughts on “Stephen Sedley, FSOI and the PSC, getting antisemitism all mixed up”