The 29th April is always a sombre day for me. Sixteen years ago today (29th April 2003), I was talking to a friend of mine ‘Dom’, about a new business adventure she was starting. I was eating a cake, a sample that she had brought me to taste. Dom came to pay for a flight I had sorted out for her. She had been to France to see her family and when she wanted to return from Paris, she’d call, I’d book the flight, and we’d settle once she had arrived. We chatted, I told her the cake was delicious and then we said our goodbyes. It must have been about 11am. ‘See you later’ I think I said to her. I wouldn’t though, in fact I never saw her alive again.

I had known Dominique (Dom) for about six years. Like many from Western Europe trying to find their way in Tel Aviv, Dom was part of the tourist crowd. A few hostels and pubs littered the Ben Yehuda, Allenby area and were full of working travellers. Thousands of young Europeans gravitated towards Tel Aviv’s Mediterranean shore. The hostels supplied the work, the pubs the recreation. Dom had been part of the scenery for a long time. I had first met her in the late 1990’s and if I remember rightly, at the time she worked in a launderette that doubled as a billiard/pool hall. We had been in touch ever since. Dominique was extremely popular and since I had my own tourism related business, Dominique was always sending me new customers.

Dom worked for a while at a beachfront pub called the ‘Buzz Stop’. Originally sited near the ‘dolphinarium’ on the Southern beaches of Tel Aviv, the owner Eli, eventually moved it to the centre of town, near what was then the American Embassy. In 2001 another pub opened next door -a live blues music bar called Mike’s Place. Dominique switched from working at the Buzz Stop to Mike’s Place. She worked at Mike’s Place from the day that it opened. I frequented both. They were my local hang-outs and I knew most of the regulars.

But Mike’s place was a pub on a beach front and full of tourists. It was a world away from the conflict. The evening of the 29th had been busy. It was Tuesday night- ‘Jam night’ for the Blues bar and everyone inside was having fun. Yet just a few hundred yards away in Hayarkon Street, two men were busy getting ready to kill.

The bomb at Mike’s Place 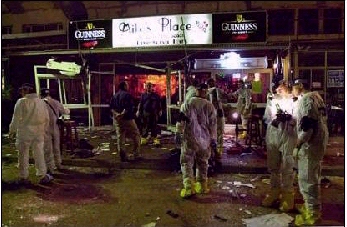 Dom wasn’t killed instantly, but she was badly injured. I believe she lost a limb in the blast and was still hanging on as she was taken away in the ambulance. She died on the operating table in the nearby hospital. Two others, Ran Baron and Yanai Weiss were also killed. I got the call at about 1:45am, about an hour after the blast. ‘There’s been an attack’ I was told, ‘Mike’s Place has been hit’. Initially I was informed Dominque was hurt but had survived. That tragic news came a couple of hours later. I got dressed and went down to the site. It isn’t the only time I have witnessed the aftermath of a suicide bombing. You never forget – sights, sounds and smells that are seared into your memory.

The explosive device of the second bomber failed to detonate and he fled the scene. Later he turned up at the David Intercontinental Hotel and struggled with the security guard before running away. Then he disappeared. His body washed up on the beach about two weeks later. There is an assumption that he had been injured when his explosive device did not detonate properly.

These two terrorists were not from Gaza or the West Bank. They were not Palestinians. The bomber that killed Dom, Ran and Yanai was Asif Mohammed Hanif. He was from Hounslow in West London. The second terrorist Omar Khan Sharif was from Derby. These two terrorists were brought up and educated in the United Kingdom. They travelled to Israel because they wanted to kill Jews. Some say the terrorists met each other in Damascus where one went to study. It is there they are said to have been ‘radicalised’. Others say it happened online.

After making plans back in the UK, they crossed into Israel from Jordan on April 12. They visited Hebron on the 14th before spending five days in Gaza. They spent a night in Jerusalem, before staying a night in Tel Aviv on the 21st, probably to decide on their target. Then they visited Ramallah and Nablus before returning to Gaza on the 24th. Another five days in Gaza. They crossed from Gaza back into Israel on 29th April 2003 just a few hours before the attack. Probably around the same time I was telling Dominique I would ‘see her later’.

The terrorists checked into Hayarkon 48 Hostel in Tel Aviv. That part is my fault. The terrorists had used the Lonely Planet book as a guide. When the guide book author was in Israel writing the latest version, I had helped her throughout her stay. Hayarkon Hostel only opened after she left. I promised the owners I would try and get them included. I wrote, I argued I made my case. Hayarkon 48 was added to the guide – without the author ever visiting it- and the terrorists chose to stay there. It was in their room at the hostel that they made their final preparations.

Both Hamas and the Islamic Jihad claimed responsibility for the attack.

The Brits and Hamas

These are the two British terrorists: 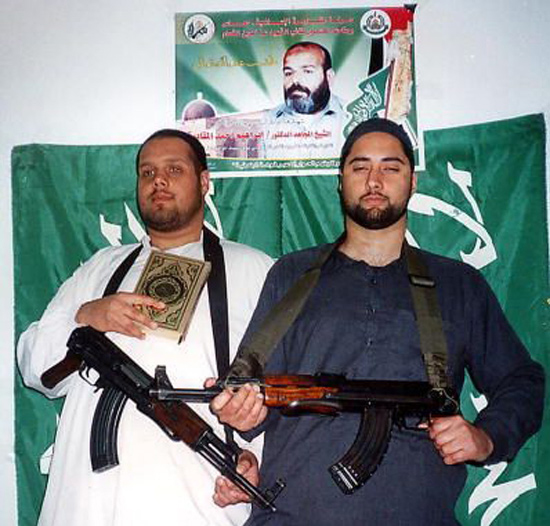 Both Asif Mohammed Hanif and Omar khan Sharif have bios on the Al-Qassam website. The website of the military arm of Hamas. On another page of their website are numerous images of the two standing alongside Hamas emblems. The title of the page reads ‘images of the martyrs’. These two British terrorists even prepared a Hamas martyrs video.

Aside from the two terrorists being British born and educated, there is another deeply disturbing element to the Mike’s Place story. The terrorists travelled under the umbrella of left-wing activists. Everywhere they went they stayed with activists and used them as cover. They met with members of the International Solidarity Movement (ISM). Italian journalists had helped them move around the country.

One specific female journalist had taken them into Gaza and brought them back in her car into Israel. The presence of the journalist gave legitimacy to the terrorists and they passed the security checks. Dozens of people ‘of the humanitarian left’ had been in contact with these two terrorists. Not one contacted the authorities after the bombing. Not one. Even after some had realised that they had had made contact with the terrorists and knew some of the hidden details of their journey – nobody saw fit to contact the Israeli authorities. Not even the journalist who had driven them around.

Until the Italian journalist had transported two British terrorists with their bombs across the Gaza border to commit their attack, Israel was lax with journalist movements into and out of Gaza. When people talk about press freedom and access to Gaza, it is worth remembering why that changed and the silence of the journalist that helped the bombers move around.

There was a documentary team making a story about Mike’s Place before the attack. They got footage and a story they never expected. Following the bombing they made award winning documentary film called ‘Blues by the Beach‘. The filmmakers also published a graphic novel:

This is Hamas and this is radical Islamic terrorism. The same terrorism that strikes in London, Paris, New York, Columbo, Nairobi, Cairo and anywhere else they manage to detonate their bombs. Terrorism that deliberately destroys lives. When people knowingly align with Hamas, when they call them ‘friends’, when they say ‘Kaddish‘ for Hamas terrorists – there is no excusing or forgiving such a loss of ethical direction. Even today, Hamas have martyr pages for these terrorists. People who wanted to kill civilians in pubs.

This wasn’t the only time that someone I knew was killed by terrorists in Israel, but Dominique was part of my world. In an obscene twist, so were the terrorists. Because it took place shortly after midnight, most of those involved in the attack recognised the 30th April as the anniversary. For me it will always be the 29th. That was the last time I saw Dominique Haas smile.

This blog is unique, and I engage in deep undercover research into antisemitism and the lies people tell about Israel. The work is fully independent, and I have uncovered many key stories on antisemitism on this site. I was recently named as one of the J100 (‘top 100 people positively influencing Jewish life’) by The Algemeiner. If you can, please consider making a donation towards the ongoing research.