Ben Dor / Uni of Southampton, who are you trying to kid? 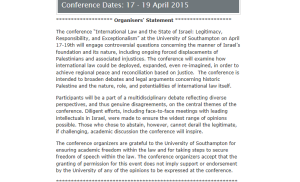 a nonsense of a statement

included is this part:-

“The conference organizers accept that the granting of permission for this event does not imply support or endorsement by the University of any of the opinions to be expressed at the conference.”

Which I suppose indicates the University are at least now aware the conference is likely to be a disgusting, pre-written, anti-Semitic diatribe, that they really do not want to be associated with. Well, if you are clearly now aware it is a vile and unforgivable piece of work – cancel the horrible thing. Trying to distance yourselves from something you should never have given permission to either indicates you were either conned into thinking it was something it is not or are simply regretting your decision. Your statement is weak because this is happening on your turf, with your logo and using assets that you only possess because of public funding.

But the most interesting part of this fascinating statement is the hypocritical con contained within, where the organisers attempt to explain away the one-sided vicious anti-Israeli stance they have taken by blaming it on the ‘abstainers’, the Israelis who despite the organisers best efforts and even ‘face to face’ meetings, chose not to come.

DO NOT BE FOOLED BY THE CON!

And from the same boycott declaration: –
“While opponents of the academic boycott of Israel’s institutions often complain that it infringes on open dialogue, in reality it is clear that such referendums open up space for debate on a topic often side-lined and silenced on university campuses:” The boycott targets specifically the very “image of normality” that having Israeli participation would bring.

Or in other words, if they were to allow Israeli academics onto these panels it would be a direct and flagrant breach of the BOYCOTT that well over half of the panellists have signed up to. The academic boycott is designed specifically to punish the institutions and silence the pro-Israeli voice. Read the statement, understand its meaning – there is no dispute on this. Over half these academics cannot and will not conduct any academic research with an Israeli who is not adamantly opposed to Israeli policy. Period. We know because they’ve told us so. Often.

And let’s be brutally honest, the last Israeli academic to turn up to speak at the University of Southampton wasted his time and possibly his airfare. The BOYCOTT  worked and the plans were changed to accommodate the boycott. If Ben Dor is now implying he could convince the pro-boycotters who conducted that successful boycott to keep away *this time*, he perhaps needs to explain to his employers, the University of Southampton, why he didn’t use that influence last time the university invited an Israeli academic to speak. If he is unable to provide such a guarantee or apply such pressure, then we have additional evidence of the hypocrisy. Given one Israeli turned up at the University of Southampton and was boycotted, how can Ben Dor possibly suggest the reason Israelis are not coming is down to them and not his university and the anti-Semitic road they have chosen to walk. How can he guarantee they’d get in? Simply farcical.

So when the organisers are trying to convince us or the University of Southampton they ‘did their best’ to make it fair, WHO ARE THEY TRYING TO KID. Even if a pro-Israeli academic was actually asked (which would breach the boycott that both Ben Dor and Bisharat have signed up to) – look at the list below – why on earth would they come? How do they know they’d get in? Which panel would they sit on if they did? Which one of those panellists below is Ben Dor claiming would break the boycott they have signed up to by giving a chance for a distinct pro-Israeli point of view to be aired, which is one of the core reasons the boycott EXISTS.

Ben Dor and his goons made this conference to be a one sided diatribe against the Jewish state. Out of over 190 states that have been created through war, occupation, revolution or colonial map making, he chose the Jewish one to legally challenge. This event is anti-Semitic and it is a bit late to be squirming and pretending it was ever meant to be anything else, if only those Israeli academics they are all boycotting hadn’t stayed away. How transparently two faced can you get?

5 thoughts on “Ben Dor / Uni of Southampton, who are you trying to kid?”