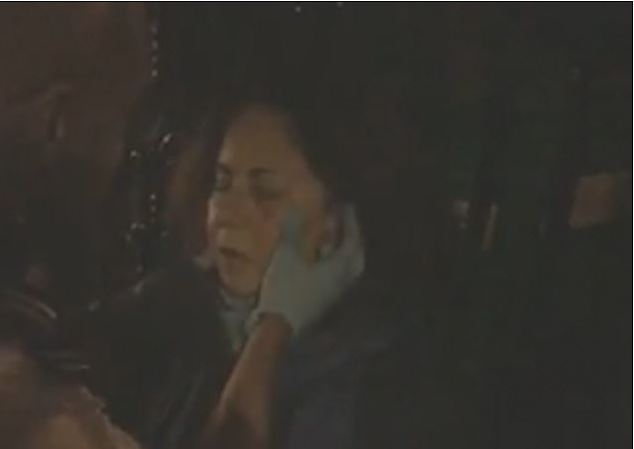 Hypocritical tweets and violence, why a Jewish protestor ends up in hospital

Yesterday evening a 70-year-old Jewish woman was attacked outside an event that set out to deny there is an antisemitism problem in the Labour Party. Eye witnesses claim she was’ kicked in the face’. Live footage shows another woman being attacked and we also see the injured woman, on the floor, being attended to by police. Luckily neither of the victims were seriously hurt. This is a new world we live in now, where those who are responsible for the societal division and anti-Jewish incitement deliberately play dumb and hide behind empty slogans and soundbites.

It started with a tweet. Yesterday afternoon Jeremy Corbyn posted a tweet blaming the Conservative party for ‘the politics of division’ and for creating a ‘toxic hostile environment’. 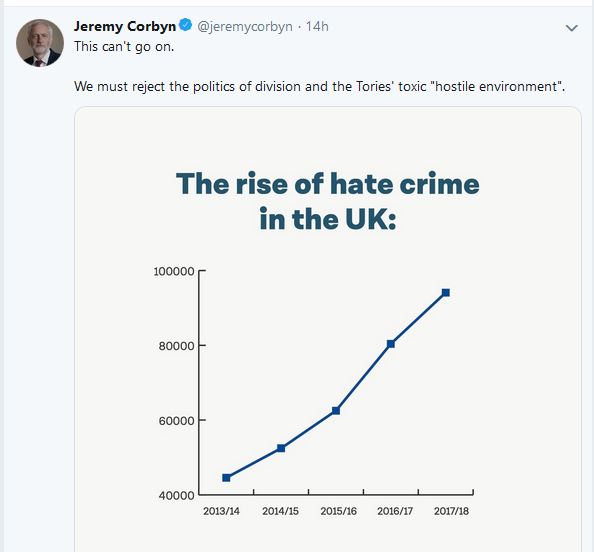 The catalyst for the tweet was a new report showing an increase in hate crime. The figures related to religious attacks and like most statistics, can be read many ways. Numerically, anti-Muslim hate clearly leads the way. Innocent people become targets of hate through the twisted associative and conspiratorial mindset of the racist so there are predictable spikes after radical Islamic terror attacks. Yet the figures also show that you are twice as likely to be attacked as a Jew in the UK than as a Muslim. Jewish numerical inferiority simply shields the truth. And here is the crunch, the finger of blame for the attacks on the Jewish community has to be pointed towards Jeremy Corbyn’s Labour Party. Yet here he is, king of all hypocrites, passing the blame onto someone else.

There was nothing special about the event. Hosted at a fire brigade building at the Holloway end of Seven Sisters Road in London, this was a meeting of hate put together by Momentum, the SWP and the PSC. Currently these hard-left Labour Party supporters are engaged in a national tour trying to build unity so as to reject the adoption of the IHRA definition. Yesterday they were in London, tonight they are in Manchester. An event with a similar theme also took place last night in Sheffield and a couple of days earlier in Leeds. Tomorrow the circus goes to Bristol. Through a denial of the antisemitism problem in Labour, these events sell the idea of Jewish power, of Jewish media control and of Jewish political manipulation.

They were vocal outside. At about 20:15 one of the Jewish women protesting was attacked. Almost immediately a second was. The attackers were also female. The protest was being live-streamed by Ambrosine Shitrit, one of the victims. 70-year-old Sharon Klaff was ‘repeatedly kicked in the head‘ by the attackers. Sharon, suffering concussion, was taken to hospital.

You would think given an attack on two innocent demonstrators, that led to one being hospitalised, condemnation would have been swift. Think again. And it is here we see the real danger, not in the attack itself, but in the response. There were security guards standing outside the event. None came to help as two women were attacked.  I posted a tweet breaking news of the attack and the excuses came in really quickly. Just a few examples:

Scary to think that the ‘brought to justice’ referenced in that final tweet actually refers to the victims, not the attackers.

A few comments from the antisemitic cesspit ‘Palestine Live’:

Can you image any other victim of violence being treated in this manner. It isn’t just excused, it is condoned and understood.

See how quickly violence is excused and the blame is shifted onto the protestors even though the video evidence clearly shows an unprovoked physical attack. Yet these posts/tweets highlight the danger of Corbynism to British Jews. Protest becomes ‘disruption’.  Opposing Corbyn makes you ‘far-right’. Zionists are ‘violent’ in the way they look at you. Jews who have voices are smeared through non-existent association. Zionists become ‘daleks’. It is the Jews who ‘threaten’, even as one is transported in an ambulance to hospital.

This whole pro-Corbyn movement is based on 90%+ of Jewish people being as bad if not worse than the Nazis. Think about that label and what it justifies. If Jews are Nazis, then who wouldn’t want to hurt them? If there was a real-life Nazi at the end of my garden, I’d sure want to take a pop. Jews are Nazis, and Israel, the homeland of the Jews, is a racist endeavour. These antisemitic labels are the very elements of the IHRA that this circus is trying to oppose.

When two people attack protestors standing by the Israeli flag, it is likely because the pro-Corbyn movement are publicly teaching their supporters that Jews are fascists and racists. That Jews are so powerful the ‘enlightened public’ aren’t even allowed to talk about it. They are taught that Antisemitism in Labour does not exist and Jews are using their power to silence dissent. If you haven’t seen it yet, that message is coming to a town near you. It is a show running nationwide. A show called ‘Corbyn’s Labour’.

I fight antisemitism and the revisionist narrative that demonises Israel. I was recently named as one of the J100 (‘top 100 people positively influencing Jewish life’) by The Algemeiner. My work is fully independent, and your support makes much of what I do possible. This research can and does make a difference. In the last two or three years, several key stories on antisemitism that received global coverage were uncovered by this research and originally broken on this site.

75 thoughts on “Hypocritical tweets and violence, why a Jewish protestor ends up in hospital”