Al Quds returned to London. This year there were far fewer people attending. They also had to march without their precious Hezbollah flag, as the terrorist group has recently been proscribed by the British Government. Each year their route also gets smaller. The days that these terrorist supporters were allowed to march proudly down Oxford Street have gone. This year they were sent down Marsham Street into Horseferry Road, along to Parliament Square and up towards Whitehall. In total they had permission to walk for less than a mile. Even then, they were not going to be allowed on our streets without opposition. This year Al Quds got the blue and white treatment.

The Al Quds rally is an Islamic invention, that was introduced into the calendar by the Islamic Republic of Iran in 1979 in ‘opposition to the existence of Israel’. The London branch of the Islamic hate festival is organised by the Islamic Human Rights Commission (IHRC). Other radical Islamist activist organisations such as Inminds have a visible presence. When I view the key activists at these events, I recognise many from my research into hard-core antisemitism. These people have a real problem with Jews. There are also many terrorist supporters amongst them. These are two posts from Sandra Watfa, the ‘face’ of Inminds:

As I stood and watched, a few buses turned up to offload demonstrators. In fact, most of the participants are ‘bused in’ by the main organisers the IHRC, and it shows. Disinterest amongst large sections of the crowd was apparent from the beginning. Yes, local activists were there and making a noise, but far too many people just stood idly by and simply followed instructions. For the most part it looked like ‘rent a crowd’.

The demonstration spends a great deal of time pretending it is something it is not. They paint themselves as a progressive and inclusive crowd. In reality they are even shunned by most UK Muslims. Throughout the introductory speeches, there were constant references to how the counter-protestors were all right-wing extremists.  Notice how Robert Inlakesh reporting for Press TV, explains away all opposition by creating a simple combination of the ‘far-right’ and ‘Israelis’: 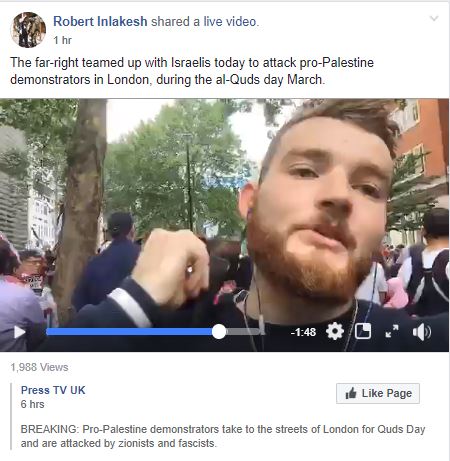 What happened to all the ‘British Jews’ that were there? This negation of our identity, where every British Jew is called ‘Israeli’ is part of the strategy that smokescreens hard-core antisemitism. If Robert considers all the protesting British Jews as ‘Israelis’, the he can claim he is only being ‘anti-Zionist’ when he attacks them. Inlakesh is another anti-Jewish conspiracy theorist I have dealt with before.

The crowd gathered. As usual, at the front of the march they deliberately place the fringe Ultra-Orthodox group Neturei Karta. A small sect of orthodox Jews who promote Holocaust revision, align with the Iranian regime and have been ostracised by all mainstream Jewish groups. This time, these Jewish performers would later please their adoring crowd by publicly burning an Israeli flag.

The rally itself now prefers smaller streets, because it squeezes the crowd into a long tail, presenting a false image of a larger number of demonstrators. The crowd was visibly smaller than last year and would have had a negligible impact had they tried walking down Oxford Street, as they had done just two or three years before. I estimate that approximately 700-800 people in total were involved in the march itself:

The Michael Scott of Al Quds

At times I felt sorry for the pro-Iranian demonstrators. Nazim Ali had the microphone. We know Nazim Ali well. Ali was investigated by police for vile, conspiratorial, antisemitic remarks he had made at the Al Quds 2017 demonstration. Nazim Ali has the self-awareness of Michael Scott. He thinks he is funnier and a lot brighter than he actually is. He tried changing the lyrics to different songs and just would not be quiet, no matter how spectacularly his attempts bombed. The crowd were having trouble following. They clearly knew to respond to only two of the chants – the ever present ‘free free Palestine’ and the genocidal ‘from the river to the sea’.

Eventually after over 90 minutes of Nazim Ali, the police took mercy on the crowd and gave permission for the demonstration to move forward. There was no Hezbollah flag for them to wave this year, but the pro-terrorist message was always on display. This ‘victory to the resistance’ banner was at the very front of the demonstration. There is little mistaking its violent message: 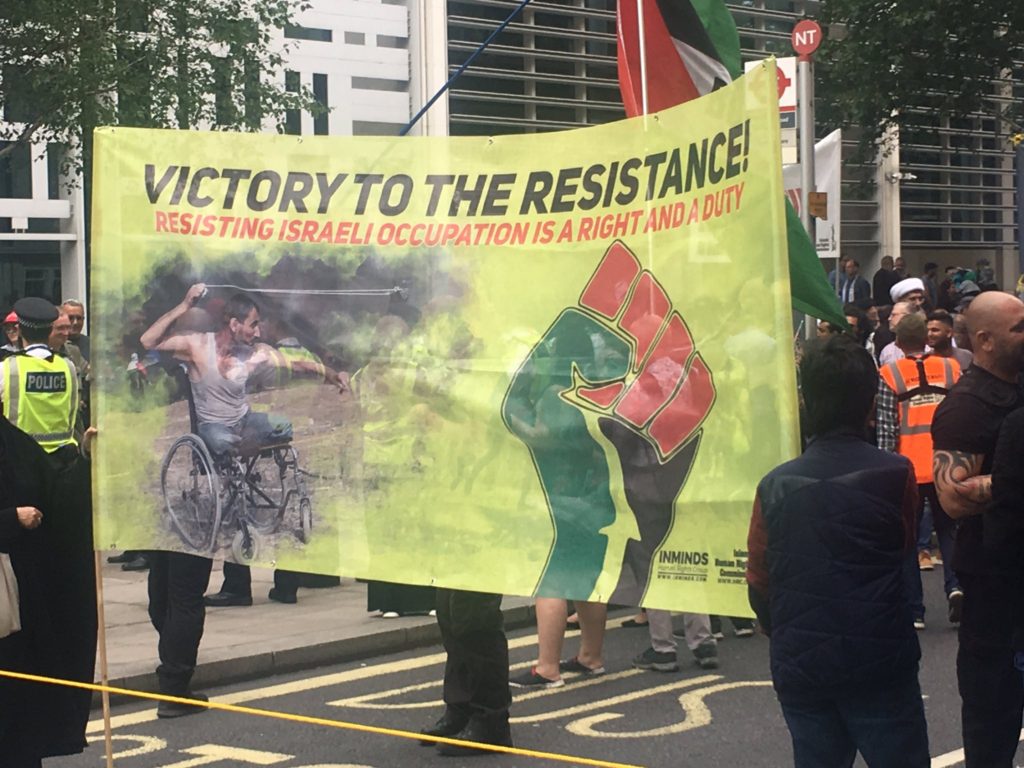 From the perspective of the demo organisers, a more unwelcome element was also at the front of the march. Pro-Israeli demonstrators were there from the beginning.

The blue and white counter protest

A few counter demonstrators had taken a position directly opposite the Al Quds crowd. Some waved the Israeli flag: 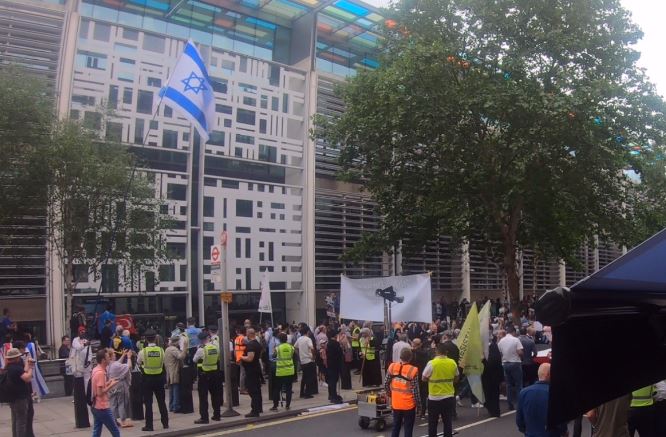 As the demonstration moved, these pro-Israelis started to march in front of them. From this point on, the first anyone saw of yesterday’s demonstration, were Israeli flags, accompanied by pro-Israeli activists singing and dancing. Their small number was ridiculed by the crowd. That derision was not going to last long – reinforcements were coming.

There were two main counter protest groups. The static counter protest, organised by the Zionist Federation, was waiting at Whitehall, near the endpoint of the Al Quds demo. However, the days of passive Jewish opposition are behind us. Sitting and playing ‘polite’, resulted in a loss of the narrative and Jeremy Corbyn as Labour leader. Today’s activists are refusing to make the mistakes of the past. A second counter protest group intended to take the protest directly to the demonstrators, making their presence felt. This type of action had worked quite successfully over the last three years – and this year they had doubled their size. About 150 counter protestors waited along the route.

The Israeli flag is flying

As the demonstration reached Millbank and turned towards Westminster, the blue and white flag began to fill the street:

The pro-Israelis did not come unprepared. At a certain point, blue and white smoke filled the air: 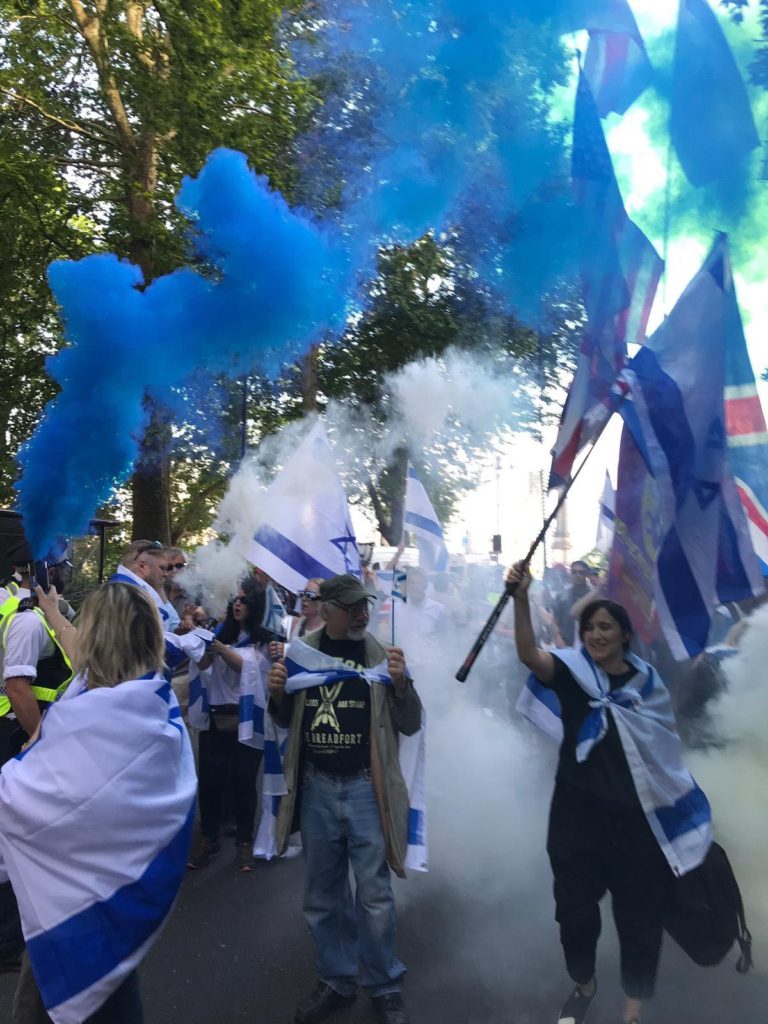 My favourite image of the day came as the Israeli flag was marched past the Houses of Parliament. The flag of the only democracy in the Middle East, flying alongside that stunning symbol of British democracy: 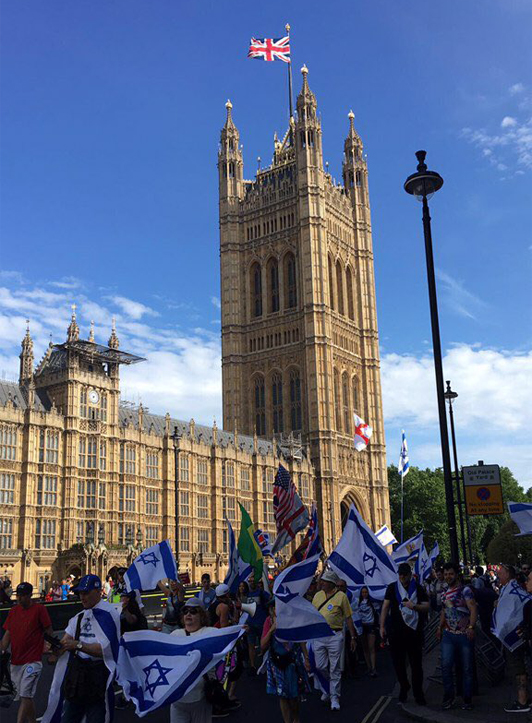 This ‘us’ vs ‘them’ theme is not imaginary. Look at this ‘partners in war crimes’ Inminds poster from the demonstration: 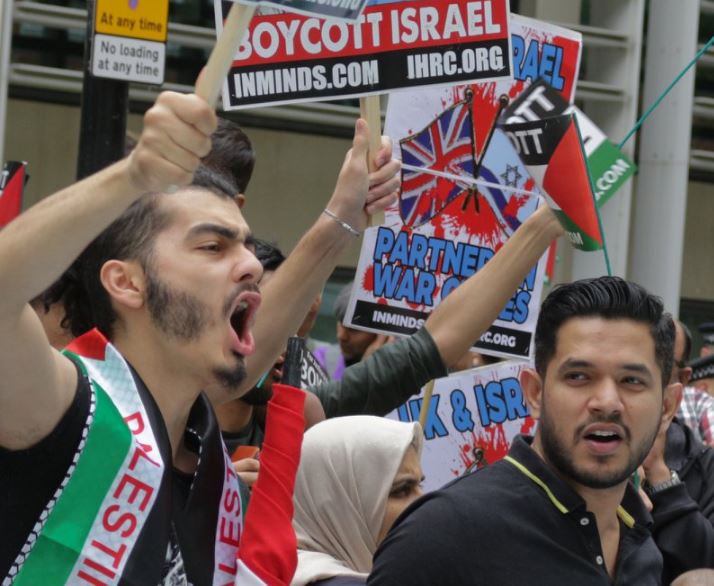 Linking the UK and Israeli flag together. This isn’t just an antisemitic demonstration, nor a pro-Iranian one. It is anti-British, anti-western and stands against all those values and freedoms both Israel and the UK cherish. For this reason, there was added poignancy to the sight of the Israeli flag flying alongside the British Parliament buildings. The entire main part of the procession was overtaken by the counter-protest. The pace, the image, the street – all visibly belonged to the pro-Israelis. The Al Quds demonstration became subdued, many of the participants looked as if they didn’t even want to be there.

The ‘occupation’ of this demonstration by the pro-Israelis did not go unnoticed:

The Party in Whitehall

As the route was short, the groups soon reached the Whitehall destination. The police directed the pro-Israelis towards what they called the ‘Jewish’ group – which is the way they described the Zionist Federation static gathering. Somebody needs to talk to the police about conflation. Those in the ZF demo began to cheer as they saw the other group of Israeli flags approaching. And as the two groups came together, the entire pro-Israeli section turned into a party.

Whether it was ‘halleluyah’, last year’s Eurovision winner ‘Toy’, Kol Ha’Olam Kulo or other well-known Israeli songs – the crowd was dancing and singing along. Typical Zionist defiance in the face of unaccommodating hate.

Whilst the Israeli side was singing and dancing, the other side heard speeches pushing the only messages they know – hate and anti-Jewish conspiracy. Nazim Ali began by attacking British Muslim MPs, calling them ‘munafiq’ (religious hypocrites) to the tune of ‘Old MacDonald’. Haim Bresheeth entirely distorted history when he said that ‘until the establishment of Israel, Jews had *NEVER* suffered from oppression or antisemitism. When Mick Napier, who is head of the deeply antisemitic Scottish Palestine Solidarity Campaign addressed the crowd, he even went as far as suggesting the Israeli embassy runs ‘workshops’ nationally teaching people how to concoct false antisemitism claims.

And then it was time to go home.

We have travelled far

We must remain aware of how far we have come. In Toronto, they can still see signs publicly calling for a massacre of Jews. This image which references the massacre of Jews at Khayber, (h/t Arutz Sheva) is from this year’s Toronto Al Quds: 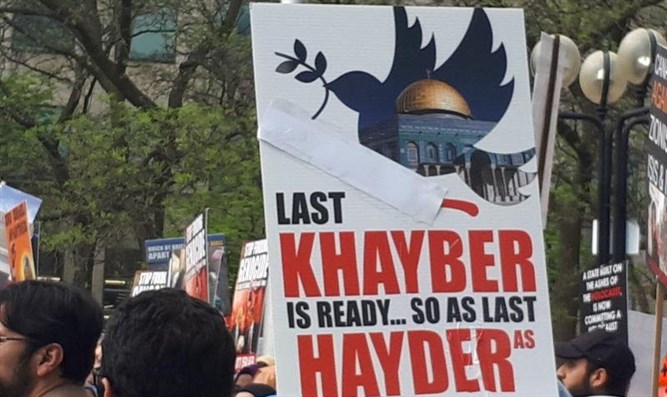 Not in the UK. Here, the rise of Jeremy Corbyn had an unforeseen side-effect – it galvanised and united British Jews, mobilising the community. Just three of four years ago, the entire discussion took place on ‘their turf’ -not anymore. We have come to understand that there is no point talking about settlements with someone who denies the Holocaust. Nor any reason to entertain discussion over a partial Israeli withdrawal with someone who seeks to destroy Israel. We have learnt that there is no point negotiating anything at all with antisemites and we recognise that often, when they say ‘Zionist’, they actually mean ‘Jew’. Those who have been fighting against the haters have successfully shifted the discussion to where it needs to be – talking about and rejecting the message of hate. We still have much work to do, but it is clear that those people don’t own the streets anymore.

Your help supports this research

This blog is unique and I engage in deep undercover research into antisemitism and the lies people tell about Israel. I attack the false narrative spread from your local anti-Israel activists groups, onto campus and into Parliament. Your help does make this possible. The work is fully independent, and I have uncovered many key stories on antisemitism on this site. I was recently named as one of the J100 (‘top 100 people positively influencing Jewish life’) by The Algemeiner. If you can, please consider making a donation towards the ongoing research.

You can make PayPal donations using the donate button above. I have also opened a Patreon page. If you can please consider donating just a few pounds or dollars a month. Every contribution is truly appreciated.