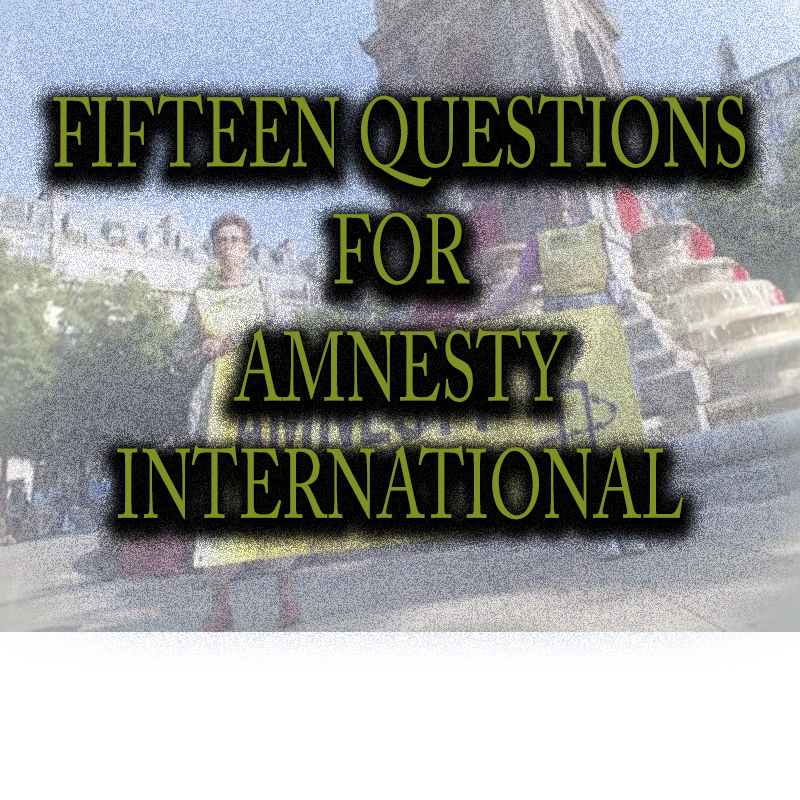 Where are the real journalists? 15 questions for Amnesty

Since Amnesty wrote their Apartheid smear report, most of the questions for Amnesty coming from journalists have legitimised Amnesty’s work. This does not mean that the journalists agree with the contents of the report, but merely that the manner in which it has been reported has given Amnesty credit that they clearly do not deserve.

It is worth reading how the Times of Israel’s Lazar Berman put Amnesty’s Philip Luther to the sword to understand what a real journalist does. Or the Jewish Chronicle’s blistering piece from David Rose. But these two are odditIes standing tall amongst the shrivelling cowards. At most, some of the more serious outlets brought in someone to try to put up a defence against the Apartheid smear- but this misses the point completely. It engages in ‘he-said, she-said’. In the end it even amplifies the notion that Jews just smear anyone who attacks Israel with labels of antisemitism.

The real story that needs exposing here isn’t a sham report that Amnesty chose to put together. It is WHY Amnesty has put it together. Dig people dig! It isn’t even like you have to dig very far. Amnesty’s fall from grace has been so blatant – it is so ‘in your face’ – that you only need to scratch the surface of their flimsy ‘human rights’ mask to be able to uncover the truth.

Be imaginative! There are 100s of angles and questions you can use . But to help you all out – here are just fifteen questions for Amnesty that I would ask.

1. One of the key figures behind your attacks on Israel – and indeed one of those leading the press conference on the report – used to have Facebook profile pictures of PFLP and Islamic Jihad terrorists. How can you possibly believe he is fit for purpose when it comes to reporting on Israel?

2. Your Deputy Director for the MENA region, which covers dozens of states, is a Palestinian who spends over 99% of his time only talking about Israel. Given the state of human rights in the Middle East and North Africa – how can this be justified?

3. We have seen Amnesty employees support terrorist attacks or give advice to terrorists. Looking through who you employ, there is a distinct pattern. Amnesty has chosen to employ several people who were visibly active anti-Israel careerists. They promoted full BDS, believed Israel is an Apartheid state, worked on campaigns to delegitmise Israel, often spread fake news and so on – long before they started working for Amnesty. All this must have been on their CVs. If you deliberately employ anti-Israel activists such as this – and send them out to write your reports on Israel – what do you expect the result to be?

4. A clear example. In 2017 Amnesty employed an anti-Israel activist named Alli Jarrar (McCracken). Jarrar came from Codepink, an extremist group that has even supported Iran’s weapons program. Before she arrived at Amnesty, Jarrar worked on a Code Pink campaign to boycott Airbnb. Shortly after her arrival – Amnesty engaged in a well-funded campaign to boycott Airbnb. How much of your activity is driven by the obsessions of those you employ?

5. Going back in time – we often see names of authors on Amnesty reports. The authors are anonmyous in your Apartheid report. Why – is there something you are trying to hide?

6. In your latest report you called Israel an Apartheid state. It obviously isn’t. Can you explain why Amnesty wasted enormous resources, changing every definition of all the words neccessary – in order to try to squeeze Israel into a box it clearly does not belong inside?

7. Israel’s situation, even if has lasted ’73’ years or ‘decades’ – depending on whether you read the original report or the published version you ‘backtracked’ inside – has been created because Israel is surrounded by brutal enemies that wish to destroy it. It is obvious as a liberal democracy Israel would far prefer open trade with its neighbours and so on. We also saw what happened when Israel left Gaza (Hamas took over) and Southern Lebanon (Hezbollah did the same). How does Amnesty suggest Israel defend itself from the genocidal aims of radical Islamic terror groups, without putting up walls and setting up checkpoints?

8. It takes just a few seconds to see how obsessive Amnesty is with Israel. Searching Amnesty’s own website returns far more critical mention of Israel than anywhere else. Why?

9. In falsely labelling Israel as an ‘Apartheid state’ Amnesty has exploited and demeaned the real suffering that black South Africans had to endure. Anti-apartheid campaigners have objected to unjustified exploitation of their history to attack Israel. How do you justify Amnesty exploiting real anti-black racism to further its own obsessive anti-Jewish bias?

10. Many Arabs inside Israel define themselves as Israeli. You have stolen their right to define themselves and insisted on placing your own labels on them. Do you appropriate other identities for your own political acrobatics – or is it just Arab Israelis that you do this to?

11. Amnesty do employ real flag wavers. People who are proud of their heritage – wave their nations’ flags – follow their sports teams – and celebrate their nations’ Independence day. There is nothing wrong with this – but it only applies to nations such as Pakistan, Lebanon, Egypt or Iraq. Amnesty would never employ a flag waver of Israel or India. Do you think there is any connection at all – between Amnesty having flag wavers of Muslim majority nations in their HQ – and its obsession with Israel?

12. Following on from the last question. It isn’t that Amnesty never criticises Pakistan – it has boxes it has to tick. But there is no doubt that Pakistan is allowed to get away with a lot under Amnesty’s nose. As an example – over the last two years the Amnesty UK Twitter account has mentioned Israel dozens of times. It has mentioned Pakistan twice. One of these mentions was about Canada, not Pakistan and the other was about Coronavirus. The same account has not mentioned the persecution of Christians anywhere in over five years. How on earth can you explain this radio silence of Pakistan’s human rights abuses?

13. So many of the ‘facts’ listed inside the report have been exposed as false. Even the opening lines are a butchered half-quote where Amnesty employees deliberately ‘chopped off’ the remaining sentence because it did not say what they wanted it to. How do you justify all these lies?

14. Given the frequency and size of the reports on Israel, Amnesty international has probably spent more resources over the last decade investigating Israel – than any other nation on the planet. Given the state of the world – how can you justify this?

15 Amnesty’s report on Israel is full of double standards, demonisation and delegitimisation. By attacking Israel’s very nature since 1948, Amnesty clearly wants Israel ‘gone’. Is there any other nation on the planet Amnesty wants to see destroyed, or is it just the tiny Jewish one?

These are just a few questions for Amnesty I would ask. All you have to do is some basic reseach – investigate Amnesty (as I did when I wrote a report on them) and you’ll come up with dozens of questions of your own.

Of course Amnesty today is an antisemitic NGO. The Amnesty ’emperor’ has not been wearing any clothes for decades – and nobody seems to care. We are talking about the largest human rights NGO on the planet. If it has lost its way – then 100s of millions of people out there who urgently need Amnesty’s help are being forgotten – left to suffer in anonymity. All of those donating money are being conned and their money would best be directed elsewhere. Hundreds of millions of people need your help. Isn’t that a good enough reason for you to get up and do your job?

127 thoughts on “Where are the real journalists? 15 questions for Amnesty”