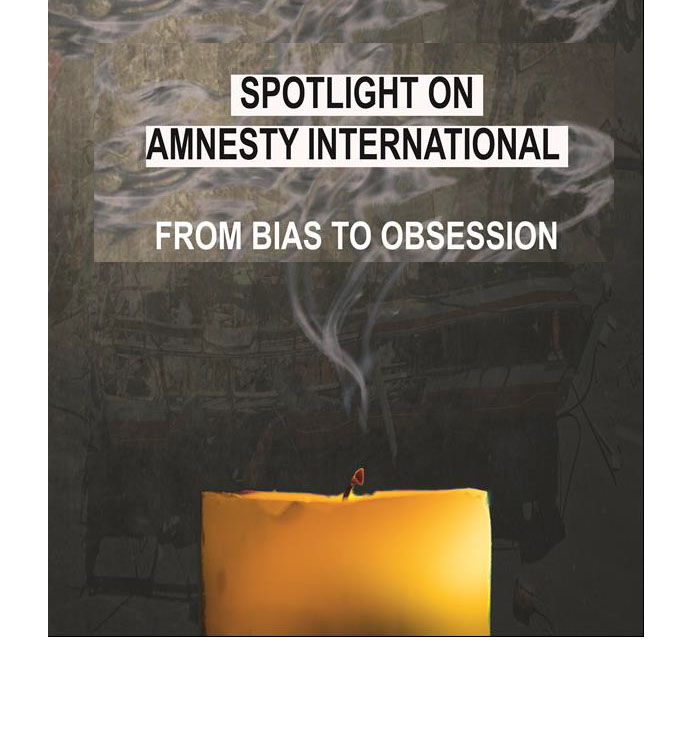 Amnesty International- from bias to obsession – the report

My report into Amnesty International is now published and the 200-page analysis is available as a PDF for download. This research was some of the most challenging I have undertaken. I linked to dozens of Amnesty social media accounts and monitored the output of over 40 staff / volunteers.  Many of the case studies concern people who are (or were) instrumental in directing Amnesty’s focus. The research took several months and hundreds of thousands of social media posts were logged. The project was commissioned by Jewish Human Rights Watch

Most people know that Amnesty International is biased to some degree, but even knowing this, I was still shocked at what I found.

There are clear political and discriminatory influences at work at Amnesty. Targets are not chosen for their actions but rather for their identity. A controversial action by India is almost certain to receive attention. Persecuted Christians are blatantly ignored. Attacking Israel is top of the list. Pakistan can literally make opposition figures disappear and Amnesty International can rarely even be bothered to yawn.

Every part of Amnesty’s arsenal spends a disproportionate amount of time attacking Israel. When fused together in a coordinated manner, the focus appears obsessive and persecutory. Campaigns against Israel are visibly better funded, more frequent and promoted with far more energy – than anything else Amnesty International undertakes. More worrying still is the alignment between Amnesty’s anti-Israel campaigns and the aims of the BDS movement, which leave little room for doubt that it is coordinated rather than coincidental. This claim will not surprise you once you have read the sections on their recruitment policy and their campaigns.

Israel is not treated by Amnesty International as a legitimate state. When Amnesty talk about Israel their language changes and there is deep hostility. Amnesty officials can direct praise to the most brutal of regimes – but never is a good word said about Israel. The only free society in the Middle East is instead held up by Amnesty International as an example of one of the world’s worst regimes.

Time after time, important Amnesty officials were found sharing more material attacking Israel than anything else – even if officially their attention was meant to be elsewhere. You could also see in many accounts an unnatural hostility towards India. There is post after post criticising India’s human rights record. Yet when you searched in that same Amnesty official’s social media – for comment on Pakistan, there was little or nothing. Sometimes there was even praise. It is clear that the level of Amnesty’s attack, depends more on national identity than the actual facts on the ground. Or in harsher terms, Amnesty’s activity is inherently racist. When directed towards Israel, the cumulative obsession can clearly be labelled antisemitic.

If you want Amnesty to help your cause, perish the thought you are a Christian persecuted in a Muslim majority state. These are Amnesty’s forgotten victims. Whilst Christians in some areas face genocide, Christianity is more often referenced by Amnesty International as part of the far-right movement in the USA. There is a general anti-western attitude across most Amnesty activity.

Amnesty’s problem has been a long time in the making. Almost two decades ago they dropped rules that protected them from ‘conflict of interest’ issues and began to employ ‘one cause’ activists – in other words – people filled with hate who use human rights activism as a convenient disguise. Amnesty is now full of such activists.

Amnesty’s people in Israel already possessed the CVs of hardened anti-Israel activists when Amnesty took them on. There is no excuse for that failure to strive for balance and the results of this dereliction of duty are everywhere. A torrent of one-sided disinformation coming out from Amnesty International as it edges ever closer to supporting BDS and calling Israel an Apartheid state. It employed activists who were already libelling Israel – what did it THINK would happen?

One Amnesty consultant was found posting an image of two fallen Islamic Jihad terrorists, with a love heart next to the word ‘heroes’. One account, listed by Amnesty as a ‘Middle East and North Africa Media Manager’ appears to have sent advice to factions in Gaza not to claim fallen ‘martyrs’, when they are killed, but rather leave the west to think they were innocent civilians. This from a person Amnesty use as the point of contact for western media.

A Deputy Director for MENA at Amnesty is just a Palestinian anti-Israel activist from Ramallah who used to have a terrorist as his Facebook profile picture. He is officially meant to focus on abuse throughout the region – all he does is post anti-Israel rhetoric. Another of Amnesty’s people just says ‘f**k Israel’, one boasted of helping pass the BDS motion at her university, one tweeted ‘from the river to the sea’ another called for Israel to be dismantled. The list goes on and on.

Amnesty International, because of their reputation, take their twisted bias into international forums where they try to influence other decision makers. The UN, UNHRC, ICC – all international players that Amnesty pressure to act against Israel – whilst holding up their biased material as ‘trustworthy evidence’. The damage this does is incalculable.

This is where it becomes insidious. Amnesty International finds a hard-core anti-Israel activist, wraps them up in Amnesty branding and sends them into the field as human rights campaigners. Except they are not human rights workers at all – they are partisan activists given a blank cheque to do or say what they like.

The nation being targeted isn’t fooled at all – and reacts, often restricting their activities where they can. Amnesty then play victim and publicly berate their target for curtailing human rights activists – thus demonising the state even further. This is no joke, we can see them pushing this type of messaging all the time. They will no doubt try to deflect from this report in the same way – even though there is more than enough evidence that there is nothing impartial or professional about Amnesty at all. This is all as disgraceful as it is deceptive.

We need to have this conversation

There is nothing acceptable about any of this. Amnesty are pretending to be something they are not. They clearly have a political rather than humanitarian world vision. They only have energy to act when it suits them and there is a clear racist and antisemitic element to much of their activity.

And it gets worse. If you employ someone who is a partisan activist in a sectarian conflict, and you dress him up as if he is impartial – you are endangering the lives of real human rights activists in the field. It becomes difficult for nations to know who is genuine and who is not.

Then we can ask – what about the forgotten? If Amnesty is spending far too much time on issues that politically tick their discriminatory boxes, what about all the conflicts and victims that do not? Is it fair on persecuted Christians around the world that Amnesty International have virtually forgotten them?

This report calls for Amnesty to open itself up to an immediate external and independent enquiry, to look at its activity, processes, allocation of resources and recruitment policy. JHRW are ‘formally submitting the evidence revealed in this report to Amnesty’s Global Assembly and International Board.‘ They are also ‘assessing referrals to the appropriate regulatory bodies including the Charity Commission and the Equality and Human Rights Commission.’

Although the evidence in the report is all about Amnesty, it is time we had this conversation more generally about this type of human rights NGO. Read the report and be as shocked and sickened as I was discovering it all. And then let us all start doing something about it.

200 thoughts on “Amnesty International- from bias to obsession – the report”