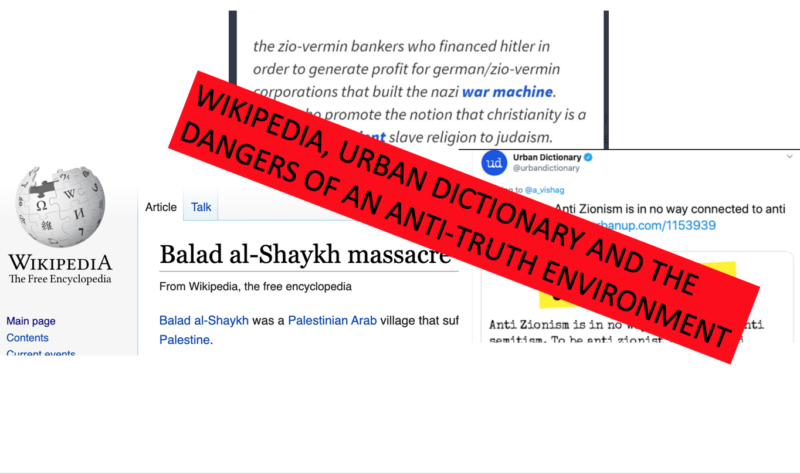 Wikipedia, Urban Dictionary and the chaos of anti-truth

Wikipedia might be free and run by volunteers but it is by far the most popular encyclopedia on the planet. Urban dictionary is a crowdsourced dictionary, that has been used as a reference in court cases. Both these sources highlight the problem Jewish people, and the truth, face in an online world.

Last week, antisemitic definitions of Zionism and anti-Zionism were being promoted by Urban dictionary. Other vile phrases were uncovered on the same website. The ‘zio-vermin’ definition reproduced in the image below, blames Jews for the Holocaust. It would not have been out of place on a white supremacist, neo-Nazi website:

This highlights a real problem for Jewish people on the internet. In a world in which ‘up-votes’ dictate reality, write history or define words, Jews will invariably lose. Hard-core antisemites, radical Islamists and the hard-left are numerically capable of creating a distorted and offensive online ‘reality’. New definitions and historical narratives that are then widely accepted and shared around as the ‘truth’.

Three years ago I made a discovery that rewrote the history of events that took place over Dec 31 1947 / Jan 1 1948 in the disintegrating British Palestine Mandate.

Or it should have done. The event was an alleged ‘massacre’ by Jewish forces in a village called Balad al-Shaykh. Evidence uncovered at the British archives showed clearly that the massacre never happened. Yet despite several attempts it has proven impossible even to remove the word ‘massacre’ from the Wikipedia page.

Wiki editors chose to rely on the self-serving and exaggerated accounts of the participants, rather than official police reports from the scene.

What Wikipedia calls a massacre

Wiki editors responded that ‘massacre’ in Wikipedia can be anything with over five deaths, and then oddly linked to the Kingsmill Massacre as justification. The trouble here is not just in the number of casualties, but the manner of the attack. At Kingsmill, Provisional IRA gunmen stopped a bus load of innocent workmen, lined them up against the wall and shot them.

‘Massacre’ is a highly emotive and loaded term, and I think most reasonable people will accept Kingsmill was a massacre. Balad al -Shaykh is an entirely different scenario. It took place within the context of a bloody civil war. This was a shoot-out between two armed forces. The Jews suffered 25% of the twelve casualties and almost all of the fatalities were men of fighting age – almost certainly engaged in battle.

If this is a ‘massacre’ then the word is rendered absolutely meaningless. It is disingenuous of Wikipedia to disregard the loaded implication behind most people’s understanding of what the word means. When people see the title in the page – it sends a message that negates needing to read the article itself. It is fair to say that the page simply lies to Wikipedia readers. It is raw anti-Israel propaganda.

A better use of the word ‘massacre’ would be as a description of what happens to history and truth on Wiki’s pages. Jews are a tiny minority up against enemies that vastly outnumber them. Jews, nor their allies are capable of policing history. The more time goes on, the more distorted reality becomes.

The example I want to present now, amongst many I found, is a subtle one. It refers to a quote 120 years old made by the former mayor of Jerusalem, Yousef al-Khalidi.

This is how the Wiki page describes it:

“In 1899 he wrote a letter to the Zadok Kahn, the chief rabbi of France in which he stated “Who can deny the rights of the Jews to Palestine? My God, historically it is also your country!”

The source for the quote is ‘Palestine: Une terre, deux peuples’ by Dominique Perrin. Better still, Wikipedia link to an online version of the book, with the quote highlighted for our benefit. And here we run into real trouble.

Because in the source Wiki uses, the Mayor says ‘my god, historically it is your country”. The word ‘also’ clearly missing.

So who added the word ‘also’? It is an addition that clearly carries major political implication.

On 24 Jan 2019, a one-time user entered the page, made the single edit and left. It is highly likely this is the act of a more regular user who sought to make this change anonymously.

As we know for a fact there are organised online armies on social media platforms using their numerical superiority to manipulate popular thought, isn’t it obvious they would also swarm inside the internet’s primary reference resource?

I am positive that it will take a proper Wikipedia editor about 4 seconds to clean up that quote – but this isn’t the point. It is just another piece of evidence of this endless whack-a-mole game that Jews are left playing.

There are just 15 million of us – perhaps just 10,000s are in some way politically active online. We cannot mobilise an entire people. In the other corner are 100,000s, if not 1,000,000s – some part of online gangs explicitly set up to swarm and distort the truth. In a world of ‘up-votes’, we are both outnumbered and outgunned.

It is difficult to overstate the damage this is doing. Last year I wrote a report on a school text-book. A textbook used to teach our children the modern conflict ‘history’ of Israel.

During the research I was astonished to note the reliance the author had placed on Wikipedia. On several occasions the textbook took direct quotes from  Wikipedia text. Often the information chosen was distorted. Teachers are sharing material uploaded by ‘anti-truth terrorists’ and then using it to brainwash our children.

A teacher can use the Balad Al-Shaykh page to spread the myth of a massacre to young minds. Children who will have their opinions misshaped by lies. All legitimised and financed by the UK government.

Years of ignoring this unfolding disaster has taken a real cost. Which is why we find ourselves engaged in fundamental battles over the nature of the state of Israel. It is so embedded that any attempt to undo this damage will meet resistance at every step of the way.

Which is why the ‘free speech’ argument has to be considered carefully. Every vile anti-Zionist who throws out antisemitic slurs can quickly attract 1000s of followers willing to ‘spread the word’. We are battling for a platform in an overcrowded and deliberately noisy neighbourhood.

The chaos of anti-truth is what these people seek. In such an environment, Jewish people (indeed the system as a whole) becomes vulnerable. In such a world, where active truth-tellers are outnumbered by 100-1 and only the most popular of items are seen – then equating all voices becomes suicidal. Truth must never become a popularity contest.

How did the blatantly false ‘Nakba’ narrative become part of accepted mainstream? It has taken just two decades to completely distort, rewrite and misrepresent history. A fictional event that anti-Israel activists sickeningly equate with the Holocaust was disseminated via the internet as gospel truth. So successful has it been, that these days if you deny the Nakba myth, you are considered an extremist.

Wiki, Urban Dictionary and social media platforms such as Twitter, TikTok, Instagram and Facebook are all helping to build fiction, radicalise entire populations and divide communities. They may be doing it in the name of free speech – but the combination of open platforms, social media bubbles and popularity algorithms is swiftly taking the solid ground from under our feet.

If we do not understand the dangers, recognise the damage already done and find a workable solution, we will all find ourselves living in a very hostile environment – one in which we won’t be able to create enough ‘down-votes’ to escape from.

317 thoughts on “Wikipedia, Urban Dictionary and the chaos of anti-truth”