Walking with the Hezbollah in London 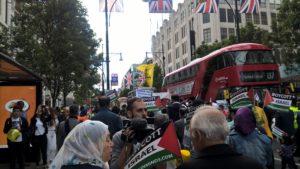 3rd July 2016. It’s ‘Al Quds’ day. An annual event held on the last Friday of Ramadan. Yet another of the ever increasing number of days where an excuse is found to march against Israel. This particular day was introduced by the Islamic Republic of Iran in 1979. With Hezbollah symbolism ever present in these ‘Al Quds’ marches, that flavour is never far from sight.

I arrived with my family at Oxford Circus Station. Holding their Israeli flags, they continued on their way towards the counter demonstration to be held near the US embassy. Unlike previous years, grassroots groups such as Sussex Friends of Israel and the Israel Advocacy Movement, had vowed the Zionists would not leave the streets to the extremists.

I was envious. However,  I had other things planned for myself. I reached the corner of BBC Broadcasting House in Portland Place, placed a scarf with Palestinian colours around my neck, pulled the hood of the jacket over my head as a disguise and entered the opposition camp.

Upon arriving I was handed a flag calling for the boycott of Israel, and slowly the crowd swelled. A coach arrived, then another. The antizionist Neturei Karta were placed at the front of the demonstration. They were kept that way. A line of protecting stewards were placed behind them and if anyone else tried to nudge to the front during the march, they were pulled away. Jews had to be on the front line, however unrepresentative they may be.

Hezbollah T-shirts, Nasrallah T-shirts, Khomeini T-shirts. These people marched proudly through the streets of London. Someone had a placard that read ‘ We are all Hezbollah’. And I marched with them. Support for radical Islamic extremists. Maybe 350 people in total, maybe slightly more. The demographic was clearly one sided. Over 80% of them looked Middle Eastern themselves. Arabic was the language most spoken.

I was not in this alone. There were two others, acting out as reporters from an international news agency. One of them was swiftly identified and removed from the crowd. The other tried to mingle, eventually talking to someone wearing a Nasrallah T-Shirt who began to glorify terrorists.

The march of the Hezbollah in London

And we walked amidst this hatred. The drum beat ever present. The mob’s conductor leading the way with the usual chants. Right through Oxford Circus, Regent Street, Bond Street, the heart of London’s main shopping district. Hezbollah flags were waving all the way. I saw a boy, maybe 13 or 14, holding the terrorist flag. At some point I was handed a large Israel hating placard to hold aloft. I soon disposed of it, my co-operation would only carry so far.

Such extremism. Such hatred. There will be no peace, there will be no progress, until this venom is extracted from the conflict. The irony that on this day in North London, left wing Zionists had gathered at a Haaretz conference to discuss the issue of peace was not lost on me. With all the will in the world, theirs is a bubble that at the moment, simply does not exist.

You cannot negotiate with this. Nor will peace move forward whilst this mob is allowed to spread its poison. This is blind hatred. Self- chosen ignorance, bias, and yes, not a little antisemitism. Those few in the crowd that were not Islamic radicals fell into two distinct groups. Those on the very far left, and those on the very far right. An absurd political marriage enabled only by a mutual hatred of Jews.

They even began to talk about ‘true Jews’. Radical Islamic extremists actually defining my religion for me.  They stood and declared I was not a ‘real Jew’. Over and over again on the loud speaker, in the heart of London. A speaker at a radical Islamic march declared to all those listening that over 90% of UK Jews are not ‘real Jews’. This isn’t antisemitism? This isn’t incitement? How is this not hate speech? On the way back from the march, activist and blogger Richard Millett witnessed and intervened during an antisemitic attack against a Jewish boy on the train. This is what accommodating such hatred provokes.

Back on the march, the counter demonstration had clearly unsettled the organisers. There were constant reminders that we were approaching the Zionists. Every 100 meters, another reminder. Warnings that people should not be ‘provoked’. That although the Zionists support a ‘racist terrorist state’, the crowd should stay calm. You could feel the rising anger. For these people Israel represents all they hate about the west. And these people hate the west. More chanting. Another hundred meters. Another reminder.

We were accompanied along the way by a handful of Israeli flag carrying ‘lions’. Those that walked not inside the demonstration, but alongside it. Their faces well known to us, and to the marching crowd.  Joseph, Andrew, I saw a few. And as I did, I heard comments thrown at them about ‘Al-Yahud’. I don’t know exactly what antisemitic slur was hurled in Arabic, but nobody seemed to care. Least of all the government and the police, those who carry the duty of protecting the Jews of the United Kingdom. 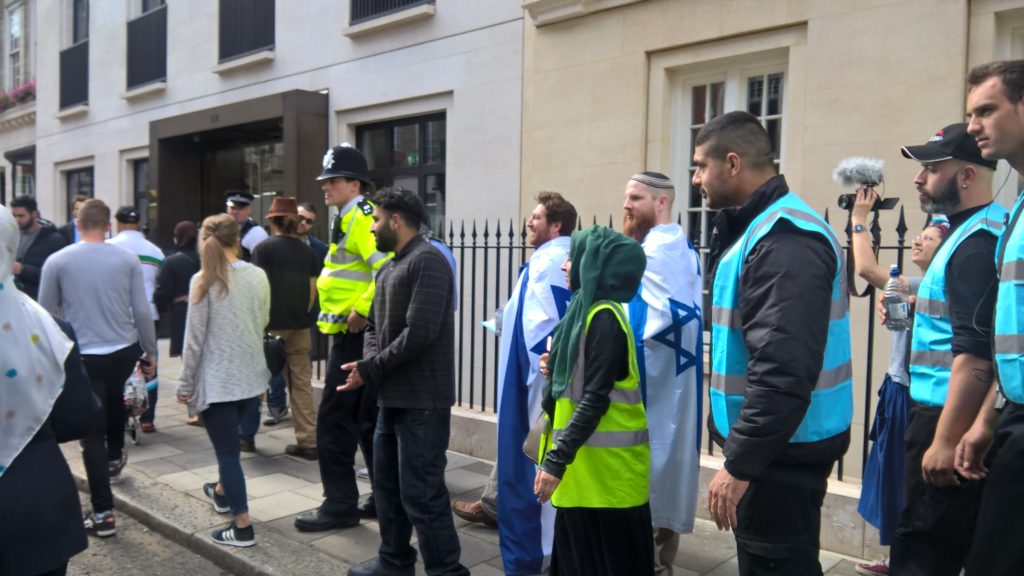 Shortly before the end, they began collecting the children and moving them towards the front of the demonstration. As with the antizionist Jews, this was another PR stunt in the making. Finally, after nearly 90 minutes of chanting, we arrived. I could see the Israeli flags. The marching stopped and scores of police divided the two groups. I waited some more, trying to talk to demonstrators. Nobody was interested. The Zionists were there; the devil himself was in sight. They had other things on their mind.

On the other side Arieh from the Zionist Federation held sway with the microphone. ‘Hatikva’. ‘God Save the Queen’. ‘Peace not hate’. My type of thinking. I put away my fake pro-Palestinian identity and tried to cross over to the side of democracy, freedom, pluralism. There was no way through. Eventually a policeman told me to step back, because I was ‘provoking’ the pro-Israelis. I pointed out my wife, my mum, my kids and told him provoking them was my ‘full time job’. He smiled and let me cross. Even then I needed to enter the counter demonstration the long way round. The protecting barriers were up.

Allowing this type of march isn’t a strength of our freedoms, it is a weakness. Yesterday, we emboldened radical extremism. We let it stand proud. We created an opportunity for people to meet and bring Hezbollah to the heart of London. I am used to being amongst this type of hatred. I have attended scores of events and witnessed some truly vile statements. But I have to admit there was something about marching with them, something about seeing the Hezbollah flag on the streets of London, that I found deeply disturbing.

And as we came around the corner and I began to see that sea of Blue and White in front of me, it is difficult to describe the feeling. Not unlike the sight of land as you approach Ben Gurion on a flight to Israel. I could see my family and my friends. I was home.

31 thoughts on “Walking with the Hezbollah in London”