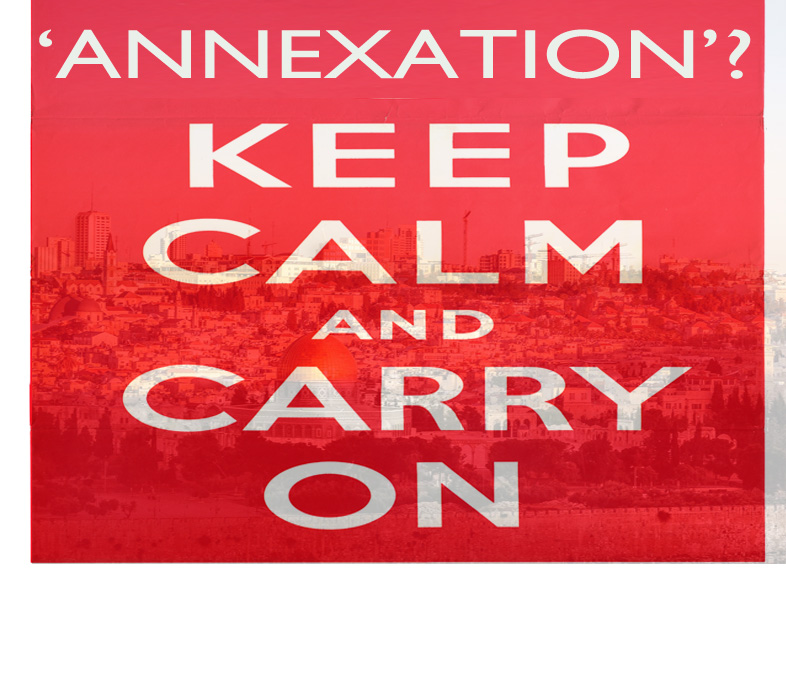 On the matter of Jewish sovereignty, everybody should settle down

This is a piece on the application of Israeli Sovereignty. I am trying to finish a deep (and very secret) research project that has kept me busy for two months, but given some of the recent articles on the subject in the media, I felt the need to pen this:

Decades ago, I remember listening to a Rowan Atkinson stand-up sketch where he referred to one situation as being like ‘a blind man in a dark room, looking for a black cat – that isn’t there.’ At the time I had not heard it before, but it turns out the real source of that quote is actually over 120 years old. As funny or as depressing as that scenario may be, these days I cannot help but think we have stumbled into such a situation -as I read article after article about the *possible* impending application of Israeli sovereignty over *some* areas of Judea.

The truth is this: Nobody knows what is coming. I’d wager that even Netanyahu still isn’t sure. Telephones are ringing, poker faces line around the table, and Netanyahu, who for all his faults is a master politician who cares deeply about the state of Israel, has many cards in his hands to play. Those who think his hand is empty, understand little about negotiating, the Middle East, geo-politics or diplomacy.

As it stands – on the back of Trump’s Peace plan which gave rise to the possibility of unilateral Israeli moves, Israel has suggested that from the beginning of July it will apply sovereignty to some parts of ‘area C.’ This includes some major settlement blocks that Israel was always going to retain, as well as the Jordan valley region that it was also unlikely to relinquish to foreign control. Israel is not talking about taking anything it wasn’t going to keep.

But we don’t know for sure what, if any, moves are coming. The result may be nothing at all. Or more likely an application of soveriegnty only over two or three major settlements. We all have to just wait and see.

Everyone who reads this blog knows I have had issues with the Board of Deputies in the past, and no doubt will do in the future, but I always give credit where it is due. The current Board President Marie Van Der Zyl has taken the responsible and accurate position – not to say anything at all. I would go as far as saying Marie Van Der Zyl is acting like the only adult in a room that is chock full of screaming schoolchildren.

The noise that is coming from international outlets on this matter is deafening. In the midst of everything that is going on in the world, Israel is the hot topic again. China gets aggressive in a part of the world in which three nuclear powers are wound together and the world yawns. Israel states it will apply sovereignty over some pretty obvious areas of Judea and everyone loses the plot. It is an absolute nonsense.

Little has been as depressing as the attitude of some parts of Diaspora Jewry.

Sovereignty and the Jewish far-left

Some of the noise coming from Diaspora Jews is expected. Groups like Na’amod (who act like the unofficial militant arm of Yachad) are obviously going to use any old excuse to attack Israel. Na’amod was created after some Yachad activists became upset when Yachad leaders wouldn’t publicly support those caught saying Kaddish for Hamas terrorists. Feeling they had no one speaking for them, they created Na’amod. They can do what Yachad can’t – even if basically the underlying politics are almost identical.

So if people like Rob Abrams, who was the person who actually read out the names at the kaddish, have a problem with any Israeli action I don’t think we should be too surprised. Yachad and those that align with them are out to convert all our youth to some ‘tikun olum’ ideology that wouldn’t last five minutes in a Middle Eastern neighbourhood but sadly remains quite convincing to young ears over a shared Israeli salad in Florentin, Golders Green.

Yachad see this as part of an ongoing strategic battle to strengthen their hold on the Board of Deputies. Painting the BOD as the ageing out of touch voice, works well for them and they will make the most of the opportunity however much damage it might do to the community.

Hysterically (or perhaps heartbreakingly) Na’amod actually tweeted this week that the future of British Jewry ‘belongs to them’. In truth left leaning semi-secular Jewry is assimilating at a rate of well over 50%. Na’amod are part of a dying community suffocating from an incoherent identity. The future of British Jewry is Orthodox and our community leaders would be well advised to spend their time saving as many Zionists as they can, rather than applauding, financing or protecting small fringe groups that deliberately weaken Jewish ties to the Jewish state.

Unfortunately those making the noise are not just restricted to the usual fringe. There are more moderate Zionists who have been climbing on the mountain with their anti-annexation loudspeaker. These are mainly those associated with groups such as the Jewish Labour Movement. This is a shameful post-Corbyn sell-out. Some of it is politically understandable. These Jewish voices have been politically homeless for five years and are desperate to reacquaint themselves with the Labour Party. Possible divisive Israeli actions provide a perfect opportunity for them to raise their voices and scream about how politically correct they actually are.

Understand this point. It does not matter if they do or do not agree with any impending application of Israeli sovereignty. The truth is that almost everything out there currently is politicised disinformation. All these people are doing is publicly aligning with those who are attacking Israel over something they don’t even know it is going to do. All so they can earn brownie points with those, that seven months ago, were all out campaigning to get Jeremy Corbyn elected as Prime Minister. They are shamefully giving Israel up as a present to show they are worthy enough to be allowed back on board. Why not just wait to see what Israel actually does first?

These groups are now all sharing the same material. I have seen some people share Yachad or Na’amod posts who really should know better. Much of what is being said in this content is just lies based on illogical nonsense.

The starting point of the logical fallacy is the absolutism of the ‘negotiated two state solution’. In this paradigm, Israel cannot make unilateral moves. I hate to point out that I cannot remember these people complaining when Israel unilaterally left Sth Lebanon or Gaza. Making this an absolute simply puts Israeli peace prospects in the hands of Hamas. What if there is no partner? Are those pushing the absolutism of the negotiated settlement condemning Israelis to a perpetual conflict where they can be held hostage by whichever radical Islamic faction is holding up negotiations at the time. Sadly, unilateralism may be the only way to break the impasse, and absolutisms are a really stupid way to approach any difficult problem.

Then there are the comments in the articles and videos about ‘annexation’ being a ‘fatal blow to Israeli democracy’. Except they have no evidence that it would be. These people twist Netanyahu’s words spoken about citizenship even though they should know other statements have contradicted these declarations. They are selecting which elements to believe to suit what it is they want to say. That’s propaganda.

The articles all act as if we face doomsday. An ‘end of Israel’s democracy’ and a ‘fatal blow to British Zionism’. Unsubstantiated, illogical, non-factual poppycock.

The subtext to these Diaspora discussions is truly shameful. Israel is a highly functioning democracy. Every dinner table in Israel is a political arena. Almost every Israeli citizen can reel off the political positions of a myriad of parties across the spectrum and name the key figures in each. Israeli diplomacy is probably more convoluted and complex than that of almost any other nation. Front line Israeli politicians have spent decades trying to build ties or sustain them in hostile circumstances. Netanyahu has spent the last decade massaging new relationships into life with the gulf states.

The critical Diaspora narrative is basically suggesting Israel does not know what it is doing. It labels Israelis as incompetent voters. The state as irrational and led by extremists. This is a precise copy of the anti-Israel narrative. The fact that this government contains LESS right-wing forces than it has done for some time is ignored. We have liberal Jews sitting in their comfortable London homes trying to save Israel from the Israelis. Talk about supremacist thought. Are we really to believe that only those such as Hannah Weisfeld can save Israel from itself?

As always I suggest that if you want to engage in Israeli politics and make a difference – make Aliyah. In the meantime I suggest everyone waits to see what exactly, if anything is on the table. And for now everyone should stop wandering around the dark room looking for their black cat. Especially as it may not even be there.

Israel NEEDS our help. This award winning research is unique – it goes wherever it needs to – and it depends on community support. The results speak for themselves and for five years I have been creating headlines. I engage in forensic research, much of it undercover, into anti-Jewish hatred, anti-Zionism and anti-western extremism.

12 thoughts on “On the matter of Jewish sovereignty, everybody should settle down”