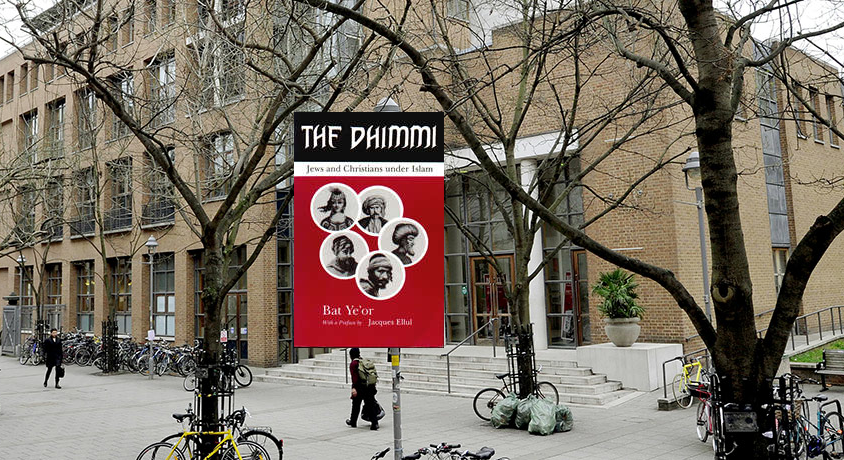 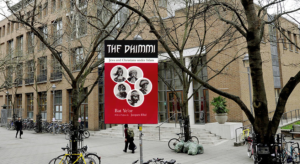 A dhimmi ([ðimi]; Arabic: ذمي, meaning “protected person”) refers to specific individuals living in Muslim lands, who were granted special status and safety in Islamic law in return for paying the capital tax.

Almost everyone in the UK knows SOAS is a hotbed of radical Islamic hatred. Except perhaps those that are themselves beyond the edge of rational thought. So on Tuesday 24 Jan, at the Union General Meeting, I thought it wise to take a closer look at the atmosphere. They wouldn’t have wanted me there, they asked for those present to display their student cards, but with around 150 in the room, they were never going to notice one extra attendee. Anyway, this is Senate House, I’ve spent 8 years at Birkbeck. I know my way around.

I don’t like SOAS. I have seen too much extremism, intolerance and Jew hatred displayed here. I consider it a cesspit. If the government, if those in charge at the university are aware that SOAS is a hotbed of extremist hate, then it becomes their duty to protect the minorities that are at risk. None more so that the Jews. It is clear from the recent news that those responsible for upholding our rights are letting these Jews down.

Those in the room make me uncomfortable. They are bullies, the social media mob (smob), with their hashtags and hypocritical self-righteous indignation. Aggressively swarming around their targets, seeking anybody they can link with enemy number one, the greatest evil known to SOAS students, ‘Zionism’.

The three motions on discussion that were of interest where seven, eight and nine. Seven, dealing with Zionist control of the world and the fact that the NUS Vice President has now clearly been infected with Zionism. Eight was a motion seeking to make Jewish students feel more comfortable and welcome at SOAS, and nine was regarding which external groups SOAS students should welcome onto the campus.

Motion seven was a predictable tirade against the way Jews control everything, but I watched in fascination as motion eight was discussed. Clearly put forward by a Jewish student, it went to the heart of what SOAS would need to do to make Jews feel welcome. Then the amendments started. The definition of antisemitism was changed, so as to exclude all reference to Israel.  Comments critical about the current SOAS attitude were removed.  Then of course, Jewish students were denied the right to self-determination.

I think of the SOAS students present, the vast majority of students have parents or grandparents who arrived to the UK from nations such as Pakistan, Bangladesh, Lebanon, Syria, Iraq, Saudi Arabia.  What they were willing to permit the Jews to do, was pray. Anything directly to do with practicing religious sensibilities was left almost unopposed. Anything to do with equality, self or national identity was removed. The Jews of SOAS are offered the status of ‘Dhimmi Jews’, a protected but second class citizenship. Jews are subordinate, they are tolerated.

Whether we choose to accept it or not, this is what is happening on campus. Jews are not equal here, nor are they treated as equal. This Dhimmi attitude from Muslim lands has been imported into the UK and applied on the SOAS campus. All elements of Jewish equality, such as their right to define themselves, is banned. Jews are told what is acceptable. They have a ruling class. The antisemitic ‘smob’.

As a Jew, all you have to do is pay them the Dhimmi tax and they will leave you alone, and the going rate is a total rejection of Zionism.

Motion nine did not at first glance seem interesting. It was proposed by someone of Kurdish origin (I think), and dealt mainly with the AKP’s Turkey. Except of course when the opening speech was delivered, the whole focus had changed. Someone who should really be dealing with the horrific events of Syria, went straight into an attack against Zionism.

The motion was about groups that host events or have a presence on campus. Which ones are to be accepted, which denied. There was an amendment that was applied to clarify that the students should be left to decide who is acceptable and who is not. The most frightening element of this section was the ease in which talk of upholding freedom of speech was inserted into comments that blatantly sought to do the opposite. There is no logic here, no moderation. These students have entirely lost sight of what freedom is.

Jewish attempts to criticise were cast aside. Those speaking in favour were applauded. Then another student got up to speak in favour of the motion. Breathe deeply and listen to the audio.

It is important to understand the meaning of what is being said here. It must also be stressed that the chair did not criticise the speech, or point out its unacceptability. The speaker went on to deal with the AKP and received loud applause when he finished. The antisemitic motion passed with an overwhelming majority, when it is referenced, this speech makes up part of the historical record.

A cesspit of a campus

I am not welcome on SOAS at all. Nor is almost every Jew I know. Nor is the Chief Rabbi. According to this motion, the Chief Rabbi entering SOAS to participate in a Holocaust memorial event is ‘not to be tolerated’. SOAS students just passed a motion banning Jews. This isn’t just about presenting a case for Zionism, this is about tainted Zionist feet walking on their holy campus. Just as radical Islam seeks to limit what other identities can do, where they can go, when they are permitted to join in and when they are not, so too it now acts on the SOAS campus. SOAS is the Al Aqsa Mosque of the London university scene. There is a huge sign outside the campus now, it reads ‘Jews not wanted’.

This is what is happening. Jews are now Dhimmi on campus. Let us call it out for what it is. Either the UK government takes action against it or accepts it as fait accompli. The choice is theirs to make. Us Jews? We have other decisions to make.

EDIT 16:21 on 26/1 SOAS Student union released an empty statement that suggested no organisation was banned from speaking on campus. For whatever reason they mentioned but chose not to condemn the outrageous quote. These people need to cut the empty PR  talk and accept the environment on their campus now is toxic to their Jewish students.

40 thoughts on “The Dhimmi Jews of SOAS”