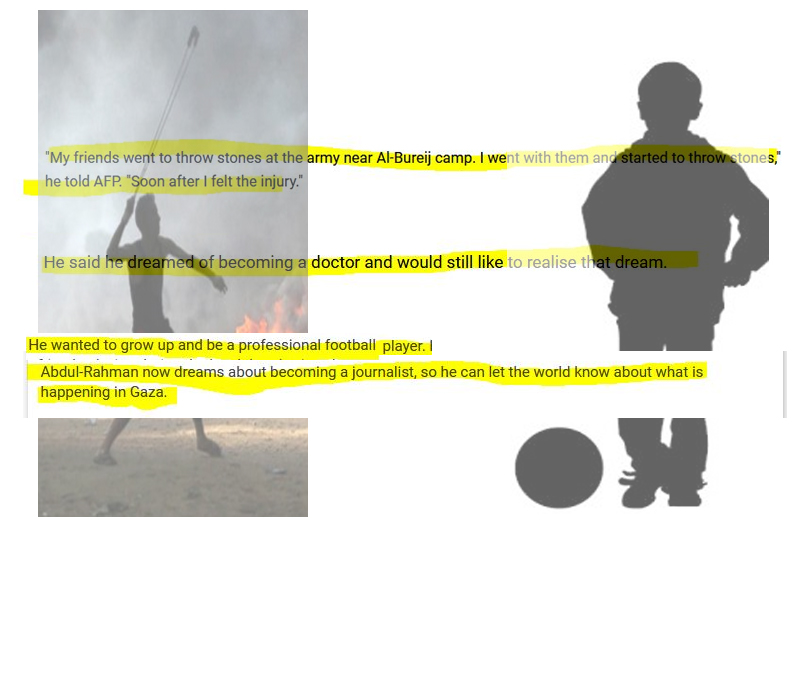 The Times ran an exclusive in May 2018 about a young child, an aspiring footballer in Gaza being shot whilst playing football with his friends. A few months later the World Health Organisation (WHO) published an embellished version on their website -having the Israeli soldier deliberately shoot the child after a face-to-face confrontation. Schools provides the WHO story as a key case study for students to learn. The only problem – much of the story surrounding this tragedy was created by the Hamas propaganda machinery. Bookmark this blog – it details how the propaganda of a radical Islamic terrorist organisation ends up being taught to British students at school.

The boy who plays football

The Educational Institute of Scotland (EIS), Scotland’s largest teaching organisation, provides material on the Israel /Arab conflict for both teachers and students. As you would expect, there is a lot of disinformation and distortion in their content. I was going through it to highlight the errors when I came across a shocking case study (activity 5) regarding the shooting of a young boy along the Gaza border.

The case study is a horror story. It is about Abdul, an eleven-year-old boy who loves to play football. He was too scared to play in his neighbourhood because of the ‘March of Return’ protests. Eventually his friends convinced him that his playground was far enough away from the fence. Then this happened:

One of the boys shot the ball too far and Abdul started running to get it. He was not aware that the ball had landed near the fence until he found himself face-to-face with an Israeli soldier. Abdul-Rahman had no time to run before the soldier aimed his gun at Abdul’s leg and fired. Because the bullet was fired at close range, Abdul-Rahman’s leg shattered and needed to be amputated below the knee. He is now the youngest amputee as a result of the mass demonstrations.

Almost anyone who understands the Gaza protests can immediately see there is something wrong with the story. It claims Abdul came ‘face to face’ with the soldier who then deliberately shot him at near point-blank range. Israeli soldiers are not standing by the fence. Abdul would never have been face-to-face with anyone.

The case study describes a brutal, callous and deliberate shooting. It reads like it is carefully written propaganda. No student ever reading this would be left untouched by the tale. The story even has an image of a schoolboy kicking a football – designed to created identification between the student and the victim. The horror of this story made me look a little closer at the details. I am glad I did.

I soon discovered that the Scottish education piece was quoted directly from the World Health Organisation (WHO) website. The WHO story was written on 9th August  – four months after the incident.

Some facts are beyond dispute. On 17th April 2018 during the ‘march of return’ protests, a young boy was shot in the leg by an Israeli soldier. Within a week he had his leg amputated. It is one of those events that leaves everyone heartbroken. A young boy was shot, and nobody is trying to suggest this event was not tragic. These children are brainwashed from birth. Hamas and Islamic Jihad use them as shields. The parents allow them to participate in violent protests against armed soldiers. This piece is about how a propaganda myth developed – willingly assisted by the Times and WHO – and how radical Islamist lies and demonisation of the Jewish state are taught to students in our schools.

The location was near the Gaza fence just east of al Bureij refugee camp. It was one of five key established demonstration sites. There is no playground here although families did gather to play in areas away from the actual protests. It is easy to see the people looking towards the fence. In front of them are the smoking tyres, stone throwers and any terrorists trying to breach the fence or launch incendiary kites. Any child kicking a ball around would be behind the protestors, not in front of them.

East of the al-Bureij refugee camp, the center of the Gaza Strip. Photo by Khaled al-‘Azayzeh, 13 April 2018 (4 days before incident)

Having established there are immediate problems with the propaganda story – what really happened? France 24 published an article on 23rd April – whilst Abdul was still in hospital -but the story is VERY different.

The early article carries a quote from Abdul –He went to join the protest and to throw stones at soldiers. He did so and was shot amongst the crowd. Gone is the football, the accidental approach of the fence, the face to face confrontation and the soldier shooting him before he could run away. Notice too he ‘dreamed’ of becoming a doctor. The article says he still wants to. Early Arabic articles mention his ‘participation‘ in the protests. Al Quds, the largest Palestinian daily, also published the quote about Abdul going with his friends to throw stones.

In the WHO piece – the whole story has changed. Suddenly he dreamed about being a footballer – and importantly, wants to be a Journalist so he can ‘let the world know’.

Source of the propaganda myth

The source of the football myth seems to be an article in the Times. The Times ran their story on May 21. An exclusive from Bel Trew- the Independent’s, anti-Israel hack -four weeks after the France 24 piece. The Times story introduces the ‘aspiring striker’, the football match. And there is a new quote from Abdul:

“I had no stones, no knife, nothing, just a football. I keep asking myself why did they shoot me?”

The first interview (stones) took place in the West Bank hospital after the amputation. The second (football) after he is back in Gaza and after the Hamas propaganda team had taken control of his story. But the evolution of the story is still not complete. The ‘face-to-face’ confrontation and deliberate action of the Israeli soldier were not part of the story when the Times published it.

The problems with the story are so obvious that it highlights the shoddy work of the western journalists. The Times / WHO story implies that Abdul Rahman just wanted somewhere to play football.

The report makes it sound as if he lives there, by the protest – and he has been too scared to play since the demonstrations started. There is even talk of a ‘playground’. But Abdul-Rahman lives in the Al Nuseirat camp. If he wanted to play football with his friends, there are playgrounds there for him to safely do it. 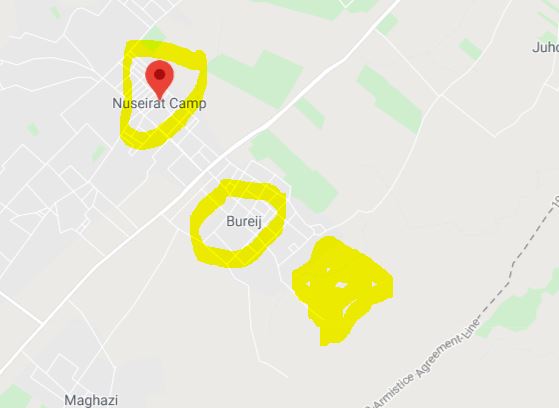 Somehow, he ends up several miles away -east of Bureij Camp, where the violent protests were taking place. Worst still – these protests at the time were highly charged. The area of protest towards the fence was a warzone. The story Abdul was giving first – that he went to the protest to throw stones – makes absolute sense. The later story, that it was all about finding a safe place to play football – is absolute gibberish.

Between May and August

Somewhere between May 21 and August 7, the propaganda story evolved again. Like a game of Chinese Whispers. Somebody took the Times story and turned it into an act of deliberate sadistic malice. No longer is it a boy standing amongst a violent crowd throwing stones at soldiers – it isn’t even just an aspiring footballer running after a ball that has been kicked. Now we have the added element of deliberate sadistic malice. A soldier looked at the boy, knew he was playing football – and shot at him from close range. Only when these elements were added did it make it to the website of the World Health Organisation. And from there into classrooms for students to learn just how evil Israeli soldiers can be.

This isn’t about Israel or Israeli policy. Nor is it about the tragic shooting of a child. This provides clear evidence of the highly skilled propaganda machine of a radical Islamic organisation taking an endless stream of gullible and lazy journalists for a ride. Someone has taken a tragic story and turned it into an antisemitic libel. A tale of sadistic Jews deliberately looking in the eyes -and then shooting at a young football playing child.

Where did the WHO story come from? Why didn’t the Times do a basic search of the history of this event? This myth is being taught in schools! If students are being taught lies about sadistic Jewish soldiers deliberately shooting kids playing football -is it any wonder antisemitism is on the rise?

How many hands did this propaganda myth pass through and why does it always take the independent Jewish researcher to expose the lies?

542 thoughts on “Hamas antisemitic propaganda story taught in our schools”