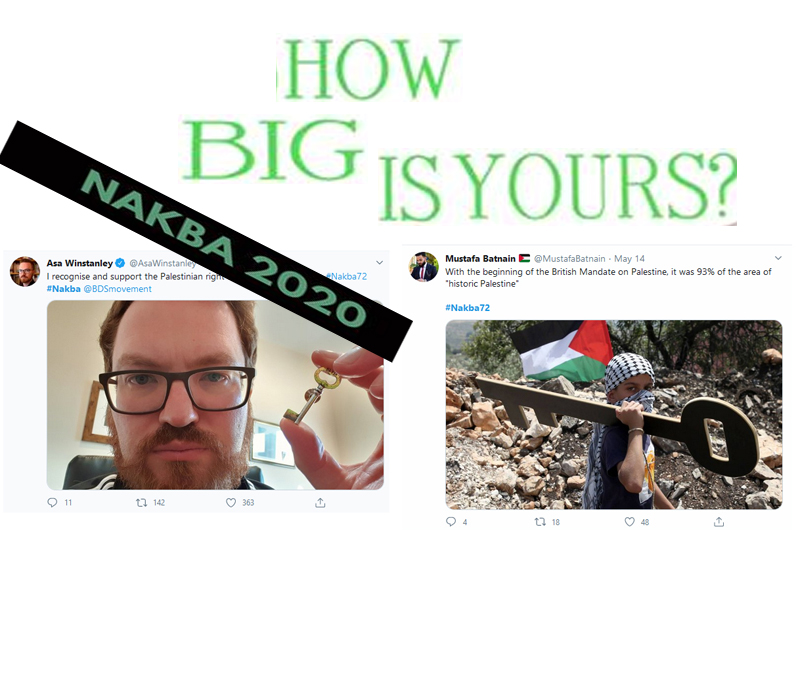 Today on Twitter is Nakba Day. It is commemorated on 15th May, the day following Israel’s independence. As bad as the distortion and ignorance surrounding the conflict may be on any normal day, the nakba anniversary always takes it to a whole new level of insane.

The true story behind the Nakba is a simple one. The UN partitioned the land between a Jewish state and an Arab state. The Arabs refused to accept it. Civil conflict broke out and this turned into a regional war. The Arab side lost and paid a price for their aggression. Rather than accept this, they have spent the last 72 years making it continually worse for themselves.

On social media – we are presented with a completely different tale. An insidious, antisemitic demonisation of Jews and a total distortion of history. As I am battling away today, I thought I would provide a few examples.

Nakba as a Jewish virus

Covid is of course another name of the current Coronavirus. 1948 is the birthdate of Israel. This Twitter trend is in tune with some of the oldest and most deadly antisemitic tropes. Over the past 24 hours, there have been 100,000s of tweets calling Jews a virus. It is difficult to believe Twitter would accommodate a global racist trend such as this against any other minority group. Antisemitism is and has always been more socially accepted than other forms of hate. ‘Jews as virus’ trending in the UK. How sickening.

One of the key reasons I know anti-Zionism is just the latest version of antisemitism, is because of the ignorance behind it all. The tale they weave is not a perspective of an historical fact nor a slight bias in favour of their own side. It is a total fictional narrative. A place where the enemy is so demonised, so over-stated and the story so ridiculous – that they are discussion the devil or the bogey man – not actual historical events. This is full on anti-Jewish racism. Look at this one:

The tweet refers to a mass expulsion of 7 million Palestinians. Two things here. Firstly, there was no mass expulsion at all. It didn’t happen that way. History records that some localised hostile areas were cleansed by a Jewish force that had neither the time nor manpower to concern itself with anything other than its own survival, against an Arab force that wanted to annihilate it. But these incidents were not the main story, they were a side show and a strategic neccessity. For the most part, the Arabs voluntarily fled or stayed. Those that stayed are Israeli Arabs today. This has been turned on its head – and Arab propaganda pretends that the Jews had a plan to expel ALL the Arabs from the start. Absolute hogwash.

But notice too, the ‘7 million figure’. This is a direct attack on the Holocaust narrative. The Nakba – a war they chose and lost – has to be bigger than the Holocaust, the systematic genocide of European Jewry. The Holocaust had six million – therefore the Nakba had seven.

Another tell-tale sign of ignorance is in the description of events. This was about a division of land between the Jews and the Arabs.  Look at this tweet:

This ‘invasion’ narrative is a constant theme in anti-Israel activism. I saw it in the story I was told at the Banksy hotel museum. I have seen it told at numerous universities and I have seen propaganda movies of the 1948 war that show Israeli tanks coming from the outside – a total inversion of the truth. This tweet relies on that false story. ‘Israeli militias stormed the beaches of Palestine’. An image created of a Jewish D-Day when the invading forces tried to capture the beachheads. This simply isn’t real. Whatever is driving these people to spend all their day on Twitter – it isn’t history – it is hate. A hatred and demonisation of the Jews. Antisemitism.

For much of the day, along with #Covid48, other Nakba hashtags have been trending. Such as #Nakba72 and #NakbaDay

The next example is another growing trend in the propaganda story. For years, anti-Israel activists have used images from the Holocaust and misrepresented them as being from the civil conflict in 1948. Then they started to equate the events, the Jews suffered the Holocaust, the Palestinians the Nakba. The latest part of that trend is to deal with denial. Because Holocaust denial is such a horrific, racist thing, if we question their totally false Nakba narrative, then we must be horrific racists too:

What manner of grotesque fairytale is this, that a denial of events during WW2 should be equated with the denial of a falsehood.
Most of the countless tweets are simply regurgitations of a historically fraudulent tale about a fairytale people of ‘beauty and kindness’, set upon by beasts of terror. An injustice that must be corrected for peace to reign on earth.

Massacres that never happened, villages that were no more than a couple of tents, Arab civilians who were actually armed militia, a mighty Zionist force that was in reality a tiny and scared Jewish population and a plan of ethnic cleansing that simply did not exist. Mix all these up together and you can present your very own Nakba tale. A fable that has lasted 72 years and has resulted in European governments enticing and actually funding the welfare of Arabs who seek to kill Jews.

As with all mythology, symbolism takes on a life of its own. Our ‘Asa’, the mumbling incoherent mess that appeared on Miko Peled’s Zoom event the other night, obviously used to own some type of cupboard – he is holding up his key. Mustafa on the other hand, clearly owned a giant’s castle.

There are no limits to the lies they can tell, nor it seems is there a limit to the number of people willing to spread them. On days such as this – antisemitic hatred is the only circus in town.

105 thoughts on “Nakba – a Twitter tale of 7 million distortions”