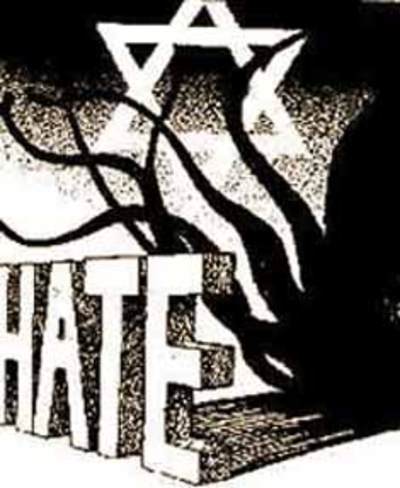 Hey PSC, no antisemitism? you are having a laugh!

On Monday night (23/5), I went to a PSC event held at the P21 Gallery in Euston. Miko Peled was speaking at a book launch for the latest edition of his book ‘The General’s son’. Peled outdid himself; nastier than Blumenthal, more distortion than Pappe, more unhinged than Barkan.

Miko Peled is lost. I am not a great believer in generalisations, so dislike the all-inclusive labels such as ‘self-hater’. Each of these individuals has taken a different journey along the way, but there are clearly deep personal issues with them all. Miko Peled bathes in the perverted adoration of the similarly inflicted. Like a Big Brother winner, Peled profits through what is wrong with him. It is highly unsettling to witness.

I do not need to go into detail over all the distortions of yesterday’s talk. The trap Miko Peled fell into is evident from the outset. He realised that some of the Zionist tales were myth, which to him made the Arab narrative pure gospel. This argument I have heard from them all, the flawed logic of the true believer – one false idol replaced by another. The classic ‘non sequitur’ of the ignorant.

For Peled, Israel has to be removed from the map, no question. The ‘settlers of Tel Aviv’ could become, if the Arabs are willing to forgive them, just the ‘polite guests’ inside the new state. His historical narrative is so false it has to be deliberate, his description of the present seems designed to mislead.

Miko Peled overstepped the mark several times, most notably when he spoke of antisemitism and Islamophobia. It was this, rather than the fake stories about the conflict, that I found the most objectionable. I’ve become immune to the constant distortion about the historical conflict, and more attuned to the underlying messages. Peled did not disappoint.

The video of the event will shortly be released by the PSC. I suggest you bookmark it for reference to use, if anyone dares suggest the PSC or BDS are not war movements, or that the true aim of both is not the total destruction of Israel.

Miko Peled suggested that the crisis in the Labour party is caused merely by ‘Zionists’ stirring up trouble. He said “Everyone knows this entire antisemitism thing is nonsense”. Then he pointed out that ‘Islamophobia’ is also a strategic creation of the Zionists:

“If anyone has any doubt, that this entire Islamophobia thing isn’t coming directly from pro-Israeli groups, then excuse me you are out of your mind.  Absolutely. And when you look at each case, individually you will see, the hand, the fingerprints of some Israeli lobby, some pro-Zionist groups”.

Those pesky Jews stirring up trouble. Antisemitism doesn’t exist, Islamophobia does and both of these issues are the fault of the Zionists. Peled returned to the theme of non-existent antisemitism on several occasions. Similarly, at another PSC event on Saturday, I heard the same tune played. So, rather than dissect Peled’s flawed narrative, I will turn my focus on those listening. Those inside the hall. I will show that antisemitism and the PSC are Siamese twins.

Antisemitism and the PSC

One thing you notice straight away about these people is many focus almost exclusively on the conflict. Their Facebook pages are simply all about Israel. It is by any definition an obsession. They consider Israel to be demonic, all powerful and all controlling. The accusations are relentless. The comparisons with the Nazis are pervasive.

(I have used Facebook posts and the PSC event listing as an indication of those that attended. Apologies to those that said they would go / went, but didn’t. Importantly I have also ignored all posts related to the conflict itself regardless of how obscene they may have been. These posts have nothing to do with the conflict.)

At the event itself, in one of the front rows sat Pamela Hardyment. Well known for years as part of the active boycott movement, Hardyment was visibly popular amongst the other delegates. On Facebook, Hardyment apparently changed her Facebook name to Pam Arnold, having apparently switched identities after being caught last year hurling vicious obscenities on a video.

Hardyment, who said of Lieberman that “he makes Hitler look like a good guy”, also posted these: 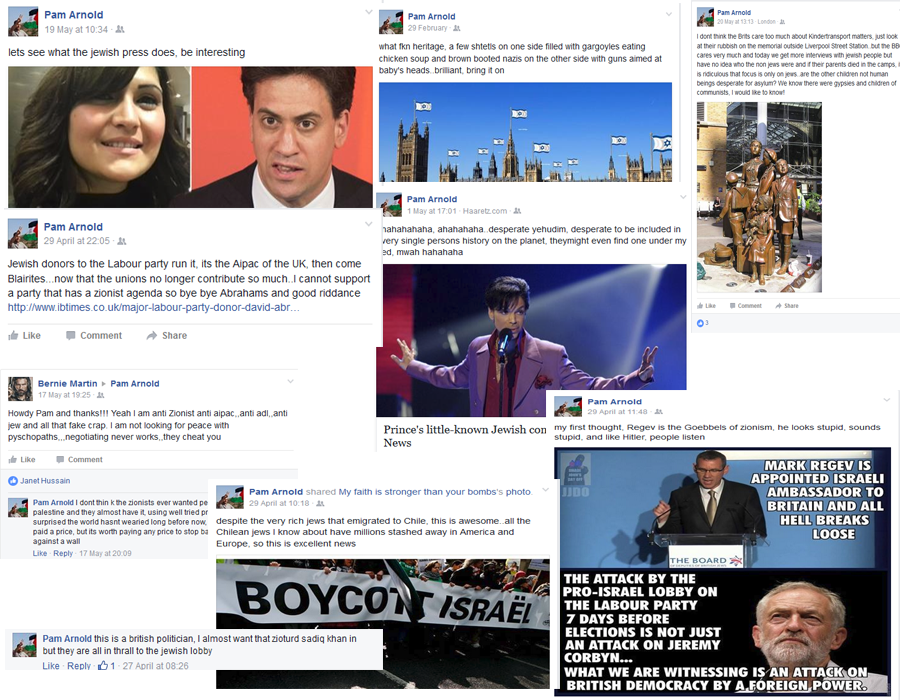 Andrew Nelis, was also present. Nelis, who thinks Winston Churchill was a war criminal, posted this from Rense.com: 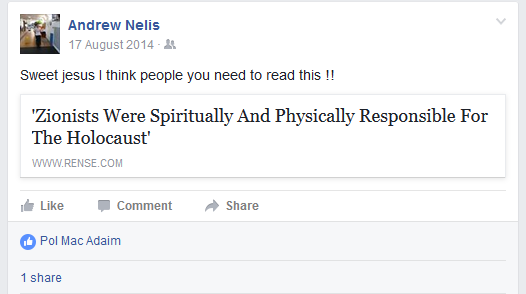 On his timeline, Nelis posted a photo of himself with Ovais Mughal at the event. This is from Mughal’s timeline: 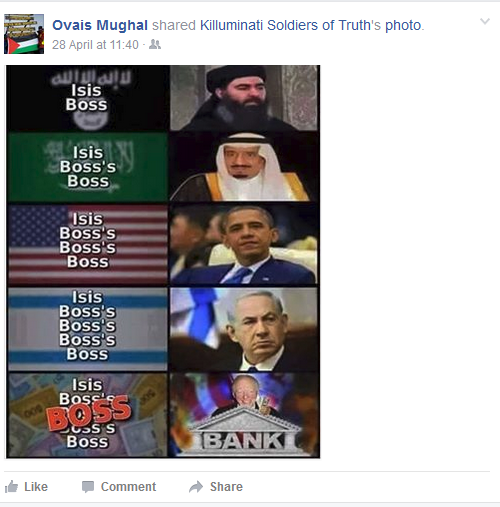 Another at the event was Tony Gratrex. Like Hardyment, Tony was also welcomed by several members. Gratrex is a conspiracy theorist. At the infamous Palestine Return Centre event that saw Kaufman speak of ‘Jewish money’, Tony asked a question about the 1913 Federal Reserve act, asking ‘who really controls the money?’. This is a classic antisemitic myth. These are some of Gratrex’s Facebook posts: 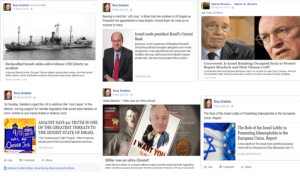 Sarah Brookes was also there. Brookes shares many of Tony’s posts, including a recent ones that suggested the antisemitism crisis in the Labour party was nonsense and that Israel’s ‘global reach’ threatens free speech. Brookes also posted about 9/11 conspiracies and also posted this: 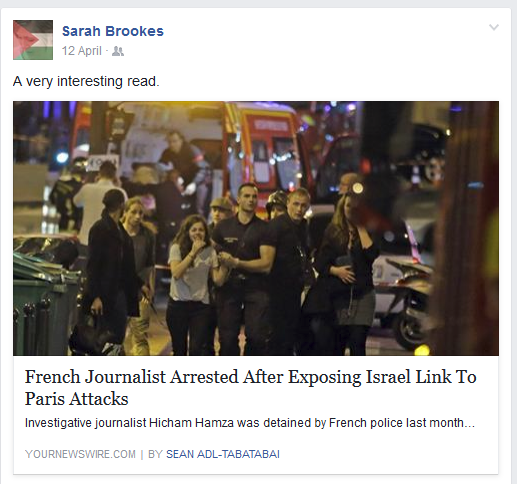 Viviana Lombardi was also there at the event. I think she asked one of the questions during the Q&A session. These are her posts:

Choci Mckenzie was there too. Mckenzie is another one who has posted 9/11 conspiracy videos. Here Mckenzie is sharing posts comparing the ‘Zionist lobby’ with Cointelpro, ‘a series of covert, and at times illegal,projects conducted by the FBI aimed at surveilling, infiltrating, discrediting and disrupting domestic political organizations’. He also pushes Atzmon’s ‘Elders of Labour’ onto his friends and shares posts on ‘how the Israel lobby drives US policies’:

On Paula Milton’s page, there is a photo from the event titled “a fabulous gang of wonderful human beings”. Pamela Hardyment is in the forefront. Nice crowd. Milton herself posted a wonderful conspiracy piece after the Brussels bombing. It implies Israel was involved in Brussels, Paris and of course 9/11. It even links Israel to the 7/7 London bombings: 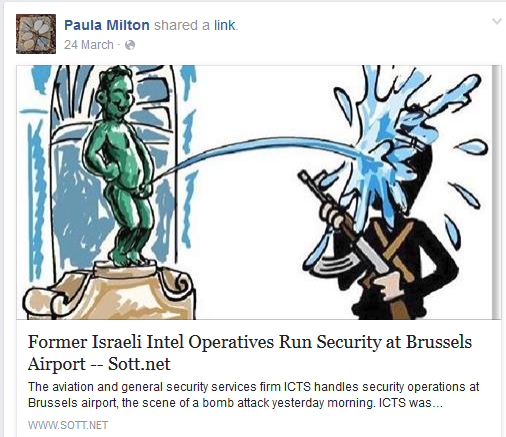 Karen Mint was also in the photo with Hardyment. In March, also after the Brussels attack, Mint also shared a conspiracy tale, suggesting that the bombing was possibly related to European nations voting on Palestine: 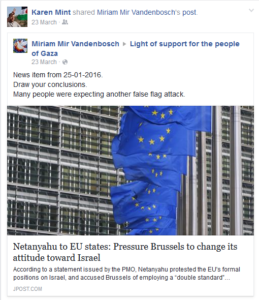 This is another of Mint’s posts: 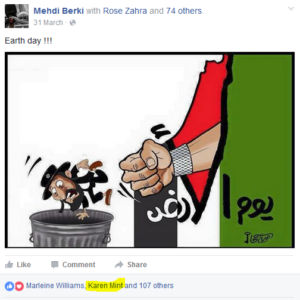 Sandra Watfa was tagged in a photo and also seemed to have been there. Sandra holds nothing back. This is one of her recent posts: 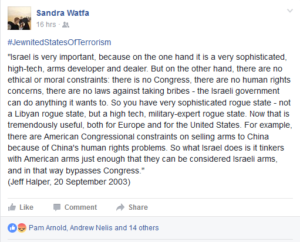 Notice too that both Pam Arnold and Andrew Neils, two of the other attendees ‘like’ the ‘#Jewnitedstatesofterrorism post. Here are a few more of Wafta’s posts: 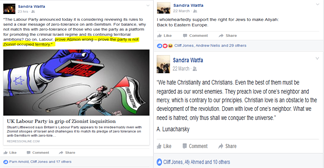 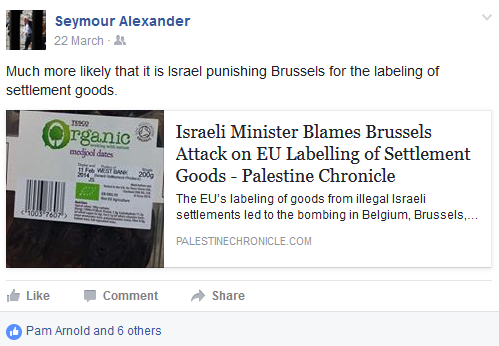 and this is worthy of note more for the response: 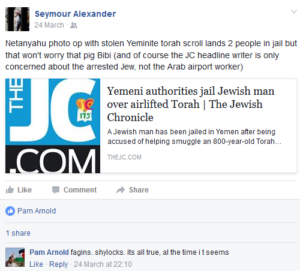 Padma Sol Mera was also tagged as being at the event: 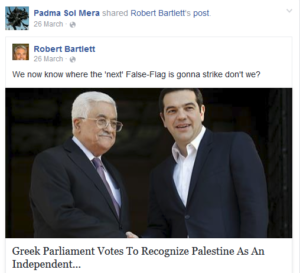 This is one incomplete look at just some of those in one event, one room. One gathering of PSC supporters.  This isn’t marginalised, nor is it simply a few that cling to the skirt tails. Just these people alone have tens of thousands of friends between them and make hundreds of posts *every day* on the subject of ‘Zionists’. This is an engine room. These are the people in the front row, the ones with selfies taken standing next to Peled, some of those that went out with him to dinner: 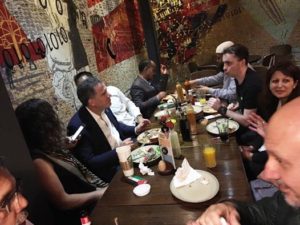 Control of the media, control of the banks, control of governments, false flag operations, conspiracy theorists. Even Fagin and Shylock got a mention. This is the power, part of the driving force of ‘pro-Palestinian’ activism here in the UK.

Just a few days ago, I was evicted from the HQ of the National Union of Teachers (NUT).  These are the people that were let in, it was this type of gathering that was sponsored, hosted, supported, by the union of those that educate our children.  Are you paying attention Christine Blower? Both you and the PSC say you ‘challenge’ antisemitism. Really? You should be ashamed of yourself.

The question is not ‘does ‘ antizionism equate to antisemitism’. That is a straw man argument designed to derail and defocus. That question provides cover for real antisemites. The real question is how many antizionists are antisemites? How many inside every single gathering of the PSC? This was one small room, look what you find when you just turn over a few stones.

Keep up to date, subscribe to the blog by using the link on the page. Follow the FB page for this blog: and follow me on Twitter. Please if you can, also consider making a donation. Research is expensive and time consuming. Simply producing just one of these piece does take days, sometimes weeks, and whilst I do what I can, there are serious constraints that impact on what is possible. Every donation, whatever its size, does make a difference.

34 thoughts on “Hey PSC, no antisemitism? you are having a laugh!”