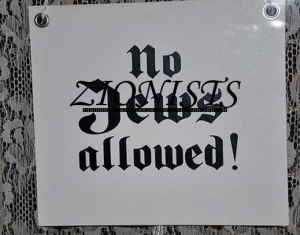 I personally dislike sweeping statements and generalisations. It is unfortunately true in a world in which you need to occupy someone’s attention with 140 characters of less, nobody has any time for clarification, but real world issues tend to be complex and nothing is ever absolute.

An absolute statement I see repeated often in the I/P argument is that anti-Zionism is antisemitism; a theory born of the prevalence of antisemitism amongst the anti-Zionist crowd that I find utterly self-defeating. Another is that anyone standing in opposition to Israeli policy is also antisemitic. There may exist a symbiosis or mutualism in the relationships of these groups, but throwing harsh terms towards some people who may be in a crowd simply because they do not like seeing children killed in conflict is a dangerous and self-damaging strategy. It doesn’t matter that you fundamentally disagree over the cause, if you call someone in the crowd an antisemite when they are not, your use of the word to the one they stand next to is automatically defused, even if that person has a ‘Hitler was right’ banner above their heads.

In theory it is possible to be an anti-Zionist and not be antisemitic. At its core, Zionism is simply the belief of the right of Jewish people to be independent. Strict opposition to Zionism could come therefore, from people who are anti-nationalists; ‘one-worlders’ who see borders and nation states as arcane unwanted relics with no place in the coming ‘golden age’.

Back in the real world, the ‘non antisemitic’ anti-Zionist would have nothing to do with a movement like BDS simply because BDS is the flagship of the BNC, a coalition of groups supporting an independent Palestine. BDS singles out Israel as a nation and supports nation status for Palestinians and everyone else, everyone that is except the Jews. A non antisemitic anti-Zionist supporting BDS is simply a fool or a contradiction.

In reality, anti-Zionism is to antisemitism what a swamp is to Malaria. Regardless of its reason for being, the core essence of the swamp cannot fail to provide a fertile breeding ground for Malaria. Antisemitism is therefore the swamp fever of anti-Israeli movements and there is absolutely nothing anyone can do to change that. The only way to clear the disease is to drain the swamp, which is why movements like BDS should be restricted from entering any publicly funded building and opposed everywhere it materialises. Not standing up to BDS, giving it a chance to breath (as with the University of Exeter) directly contributes to a growth of antisemitism.

It is in this swamp that we see the 3-way marriage between left wing idealists, Islamists and rabid antisemites. It is there that antisemitism does what all diseases do, mutating to find a different way of multiplying and attacking. It will attach itself to any and every cause, any and every body of thought. It is why we witness the most absurd partnerships in the name of gay rights, human rights, democracy, academic freedom and free speech, each in turn becoming infected by seeking mutual engagement with the Palestinian cause. Supporting movements like BDS in any way promotes and spreads antisemitism; it must because it is within its genetic make-up. Left wing idealists who permit this activity are not only guilty of creating the very environment in which antisemitism breeds, they are incapable of restricting its growth; just like Malaria in a swamp.

You do not need to seek out antisemitism within the BDS camp; it is ever present and always visible. So much so you’d have to almost choose not to see it to deny its prevalence. Wherever and whenever anti-Zionist movements park the bus, antisemitism follows. The actions of pro-Palestinian demonstrators in London recently saw calls for a genocide of Jews, antisemitic slurs, and use of the classic blood libel. Whilst the PSC was forced to issue a statement denouncing this, PSC websites promote other sites that carry blatant antisemitic messages. There is no choice; beneath the polished layer they put on show, every layer beneath is riddled with the crudest antisemitic comments imaginable.

A quick search of PSC FB sites, immediately highlights (all from Sep 2015 – no need to look very far) mentions of Jewish power, Jewish lobby, Jewish media and so on.

but it is a particular exchange following an antisemitic comment on the PSC Bristol FB page that is worth highlighting:

Notice the moderating comment, not condemning the antisemitism or evicting the poster, merely telling the poster to ‘hide it’. Notice too, the emphasis on the pro-Israeli attention to the group, as if without this spotlight, such antisemitism would not be considered problematic. This is the lifeblood of BDS and groups like the PSC must *teach* their followers to transplant the word Jew with Zionist to smokescreen the issue, hiding behind the usual cry that ‘anti-Zionist’ is not the same as antisemite. It is a vicious tactic that receives support from the extreme left wing crowd, because to them, the statement makes sense.

Some might say the PSC cannot be blamed for what others post on their FB pages, but the woman calling for genocide earlier is a well-known PSC member from Richmond and links from the PSC websites take you straight into the domain of rabid antisemitic thought. A recent post on the Exeter PSC site regarding the upcoming anti-Zionist conference at the University of Exeter directed the reader to another site for more information:

And those seeking more information, find this:

And that is some of this guy’s lighter stuff; Jews, Jewish power and international Zionist plots infest his site, with an example of one comment being:

“Juan Cole had been a consultant to CIA. He has supported all Israel’s proxy wars, Afghanistan, Iraq, Libya, Sudan and Somalia. He considers “nuclear Iran” a threat to US interests in the region. He insists that Nazis did kill six million Jews, and no Jewish lobby control American foreign policy in the Middle East.”

But this is just one specific incident. BDS, PSC, the Stop the War Coalition, wherever you look, antisemitism is now out, proud and waving flags. 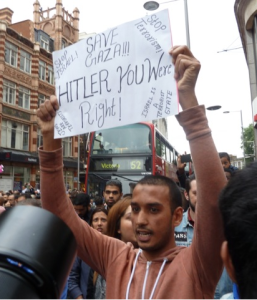 Recently, we had the vile discrimination against an American Jew who became a target for BDS in Spain, with the initial cancellation and reinstatement of the American-Jewish musician Matisyahu resulting in the musician claiming he felt “physically threatened by pro-Palestinian protesters while performing“. These groups target Jewish speakers, Jewish students, Jewish businesses, anything Jewish in fact that does not accept Israel is committing genocide. Kosher products have been forcibly removed from supermarket shelves, Jewish students across the globe claim to feel intimidated on campus by the activity and most nations with a sizeable Jewish population have seen sharp increases in antisemitic activity.

BDS is reliant on the politician’s syllogism ‘We must do something, this is something, therefore, we must do this’, with social media fuelling ignorance by disseminating information that simply isn’t based in reality or context; swaying the opinion of people with no real knowledge of the conflict. The PSC logo is a map that has simply wiped Israel away, BDS is supported by Islamic terror groups and the movement itself is merely a continuation of the Arab rejection of a Jewish presence in Israel; not in the West Bank or Gaza, but in pre 1967 Israel.

The bleak truth is that if Israel was not there, there would be no Palestine and in its place would simply exist another Jordan, Iraq, Syria, Yemen or Libya. Israel is a light of freedom and democracy in an area of ignorance, desperation and religious hatred. People look at the devastation in the region and many blame the Iraq war, but here is a mind numbing fact: more people died in the Middle East in conflict in the 25 years leading up to the first gulf war than have died in the 25 years since. The region is a constant bloody battlefield driven by ignorance and hatred. BDS is an attempt to bring part of that hatred, the Arab war against Israel, the Arab cultural and religious war against anything that is different, into Europe, by disguising it as something it is not.

There is no seperating the pro-Palestinian movements from violent, extreme antisemitism. The swamp must be not be allowed to exist untreated and antisemitism must always be opposed. Never stand silent in the face of BDS, it cannot help itself; BDS is antisemitic to the core. Why on earth would you want to align yourself with them?

2 thoughts on “The festering swamp of anti-Zionism”