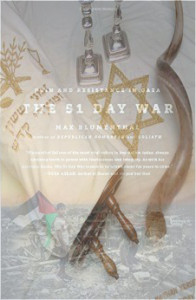 Having spent a July evening listening to Max Blumenthal at his book launch for his written account of last year’s conflict between Gaza and Israel, it then became a struggle to find an opportunity to read the book itself. I engage anything and everything on the Israel / Arab conflict and usually it is critical to do so with internet access close at hand as a way of gauging the veracity of source material.

Blumenthal is not an experienced historian or military or political commentator and having read the first few pages, the book appeared to be little more than the type of rabid anti-Zionist and unsupported opinion piece that can be found daily on any Islamic web site. So reading Blumenthal is a different type of challenge, and digesting his latest work could only be undertaken with no distractions. Yom Kippur provided the perfect opportunity, Max had my undivided attention; I became the perfect captive audience.

I had discussed Blumenthal’s tale of the cause of the conflict after the talk, so I won’t dwell on it here, and it is represented in the book in a haphazard fashion. Apparently, Israel simply wanted the war because it makes them a profit, shows off their latest weapons and keeps Gaza’s population down by killing children. In his desperation to blame the build-up itself on Israel, Blumenthal creates a scenario in which 2 terrorists spontaneously celebrate the absolute failure of a mission. I call it ‘Blumenlogic’. The entire tale is venomous nonsense.

But in the book, Blumenthal quickly blames Israel for the conflict and moves on, so apart from a single Dayan quote from 1956 that suits his purpose, there is no backdrop to the post 2005 conflicts. If Blumenthal knew history, he would understand Israel had offered to take Gaza and *all* its refugees in an attempt to solve the problem in 1949. He would know also that in 2005 Israel presented the Arabs all of Gaza as a first-step opportunity, and received a terror enclave in return. Gaza today is the result of the persistent Arab rejection of Israel’s existence.

The reader is meant to be disgusted by the devastation, so humanity appears on every page; families, children and death. This is a poisonous piece supported by private conversations between a writer who hates Israel existence and apparently others who hate Israel’s existence. Surprisingly, these conversations do not come with notes, providing links to video footage of these interviews for even the most basic of supporting evidence.

There is also no mention of how Blumenthal conveniently found all these people, so with the Hamas PR network well versed in providing witnesses to Westerners, I assume they were delivered into his lap. There are notes to most pages, many of them linking back to a piece of information that either doesn’t actually support the case being made or is itself simply unsupported. Crucially, the vilest accusations, the ones where Israel become a child killing monster, have simply no notes attached. There are entire stories presented without a single source.

But in truth, Gaza was full of death and devastation, so if the intent of the book was merely to report on the humanitarian price an Islamic regime brings to its resident population, it would be possible to set this aside as merely a horrific personal account of the cost of war; but that is not the book’s central message.

The basic premise of the book is that Hamas are the good guys, Fatah are apparently doing the will of the Zionists and the Zionists are simply evil. There is no context to anything that Israel does and each and every Hamas action is explained away or glorified. This is a book written with a specific audience in mind.

As an example, the events of 20/21st August, where Hamas probably committed ‘war crimes’ by publicly executing 23 Palestinians are dismissed as being an event ‘common throughout history’ (p155). Further, these people are, despite no trial, labelled by Blumenthal as clearly being ‘collaborators’. Blumenthal then wastes no time, placing the blame for these killings on the Israeli unit that apparently ‘turned them’. That many of these murdered people were already in jail prior to the conflict, or the possibility Hamas may simply have used the conflict to settle internal scores against innocent people never gets a mention. Blumenthal’s Hamas is beyond criticism.

Blumenthal deliberately avoids showing a face of Gaza that can be found on every corner and then hunts down or imagines a very extreme side of Israel and presents it as being common. Nobody ever sees Hamas doing anything wrong and he minimizes and then defends their use of civilian areas as military batte zones. Blumenthal has clearly become enamoured by a radical Islamic group, views them as heroes, sees them as a shining light of resistance against the brutal west, and is willing to ignore entirely the reality of the Hamas mission – Israel’s total annihilation. It is simply a twisted book.

The writing itself is a chronological mess and it took a while before I realised what another truly deceptive part of the book is; Max Blumenthal did not himself experience much of the Gaza War at all. Blumenthal announces his arrival (p49) on Aug 14th, a few days into a cease fire. The relative quiet continued until Hamas broke the ceasefire on the 19th, and that night, Israel targeted Mohammed Deif (pp143-156). Yet on page 153, on the 21st, following the funerals of 3 Hamas terrorists, Blumenthal left for Ramallah because ‘he was low on cash’. Despite his description of the actual cease-fire ‘celebrations’, these seem to take place with him out of Gaza, and only with his ‘cash flow’ apparently rejuvenated does Blumenthal acknowledge his prescence in Gaza once more on the 27th (p172). So of the conflict Blumenthal has written a whole book about, he apparently managed to see about 2 days himself and left as soon as the fighting restarted. Astonishing.

The most glaring questions are simply avoided, which perhaps signals intent or stupidity and whilst constantly pushing Hamas cease-fire demands as humanitarian, Blumenthal never once stops to ask why any nation would allow an Islamic terrorist group to import everything it wants. I understand from the book that Blumenthal isn’t the brightest bulb in the box, but the least you would expect from anyone who writes anything about today’s Middle East is to identify Islamic Fundamentalism precisely for what it is, and more importantly for what it wants.

In my opinion the book comes across as the writing of an easily influenced, naive little boy who is romanticising about Hamas the way some people romanticise about 1920’s gangsters. Blumenthal has a lot of growing up to do and in the way he gushes over his ‘friend’ Dan Cohen, who did not run when the fighting started, it becomes clear that Blumenthal may be little more than a coward who is ‘turned on’ by other people’s bravery. He doesn’t see a bunch of terrorists in Hamas, he sees people fighting (however errant) for whatever twisted cause they believe in, and appears unable to see anything beyond a non-existent Robin Hood fantasy. If he harbours some deep rooted anti-Western and anti-Jewish feelings because of personal rejections at some time or another, the scene becomes set for the twisted narrative he provides.

Growing ever more frustrated, I finally finished the book by noon and for a more serious challenge, turned to re-read Tom Segev’s take on the Mandate period in ‘One Palestine’. I arrived at 19:45 eager for some lemon juice (my wife’s end of fast tradition) and of course a little cake. A whole year till the next Yom Kippur, and next time Max, you will definitely not be invited.

3 thoughts on “My Yom Kippur with Max Blumenthal”