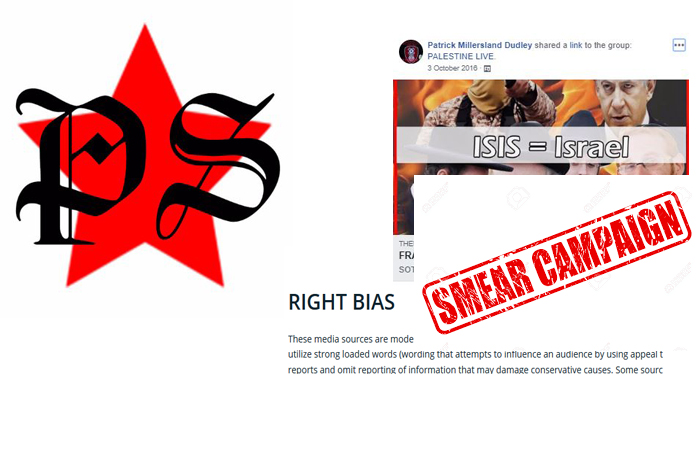 The smear tactics of the Jeremy Corbyn cult. A case study.

We all know that the Jeremy Corbyn cult uses smear tactics. It can be well highlighted by this case study. It is a worthwhile exercise to show just how empty and crudely constructed these smears can be.

My website was attacked on the evening of the 22nd December. It was down for several hours and when the server restored the site, it remained unstable as the new security systems were configured. I have ample proof of the attack. For example there are numerous emails from the host company as they attempted to deal with the problem, including one that confirms a DDOS attack. Someone also kindly archived how the website looked at the time of the attack:

The antisemitic mindset of the Corbyn conspiracy cult

Everyone knows there are bad people in the world who pose a danger. But for the antisemite, this does not hold true for the Jews. In the eyes of the antisemite, the Jews *are* what is bad in the world. So when Jews complain they’ve been hacked, they are lying. When they say they are victims of antisemitic abuse, they are conspiring to smear someone, and even when six million of them ‘go missing’, they have somehow deceived the world just to gain power and make money. It does not matter that in some cases the antisemite has replaced the word ‘Jew’ with ‘Zionist’, the seams always show where it has been stitched in.

So through the eyes of the antisemites, the attack on my website could not be real. It did not take long for someone to write up a version that turned the DDOS attack into a conspiracy to smear Jeremy Corbyn supporters, and of course being Jewish, make some money whilst I did it. On 30th December, the Prole Star upload an article that did just that: 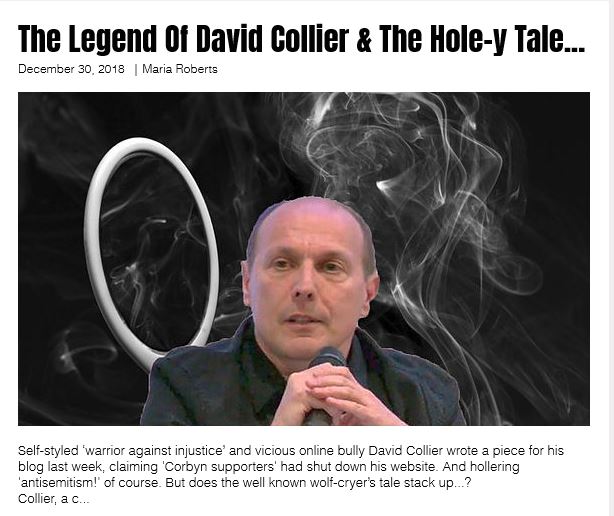 The Prole Star and its editor

The Prole Star is a Jeremy Corbyn support media. It self references as a socialist site ‘counteracting mainstream media bias’. The Facebook page has 6000 followers.  On Twitter, they have another 10,000. It seems to rely on freelance writers desperately seeking media to publish their articles. The Editor and chief contributor is Maria Roberts. Roberts has been writing for the Pole Star for over two years.

I don’t know much about her. Her Facebook friends include Jacqueline Walker, Tony Greenstein, Piers Corbyn, Jon Lansman and Grahame Morris MP. Beyond her editorial role at the Pole Star, her profile also suggests she is a Director at a Company called ‘Red Letter Ltd‘.  Company House has her using the names ‘Jeanne Roberts‘ and ‘Jeanne Maria Roberts‘. She is listed as holding ‘overall control’. The accounts and Confirmation Statement are also both overdue, so if you are reading this Maria – chop-chop.

The smear tactics of the Prole Star

Maria Roberts decided I had made up the story about the DDos attack. In the article she calls me a ‘vicious online bully’ before ‘viciously’ going on to explicitly attack me. Roberts points out that I made the claim about the attack ‘shortly before asking for donations’. In other words, I engaged in ‘wrongful or criminal deception intended to result in financial or personal gain’. Maria Roberts wrote an article to publicly accuse me of fraud.

The article contains one single piece of evidence. One. In an act of galactic idiocy, Maria wrongly reasoned that you could retroactively monitor the uptime of websites. This is simply absurd. A monitoring site only monitors whichever site you tell it to, after you have told it to do so. This is the image (evidence) that Maria used to support her accusation of fraud: 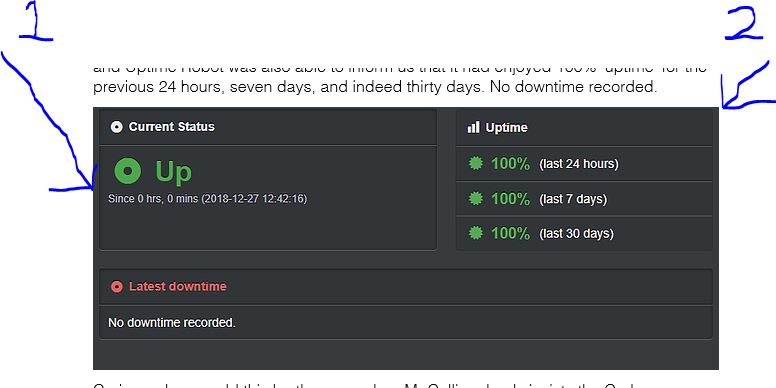 That is it. A screengrab from monitoring website Uptime Robot. Maria pointed to the figure on the right and declared that my site had enjoyed ‘100% ‘uptime’ for the previous 24 hours, seven days, and indeed thirty days.’ This is all she had. It is important to point out that the figure on the left shows that ‘Uptime Robot’ had been monitoring my website for exactly zero minutes. In other words this is a screengrab after approximately 30 seconds of research.

I could see how stupid Roberts had been. The only question of course would be, could I replicate it?

Proof of the stupidity of Maria Roberts

It wasn’t difficult to prove. I simply searched online for websites that have recently crashed. In a WordPress support forum I found that a couple of weeks ago the owner of a Chinese Language website was receiving a ‘gateway error’ when he tried to access his website.  I made sure it was working now, and then uploaded the site into Uptime Robot. This is the response:

You’ll notice two things. One is that the uptime reported is 100% for the last thirty days, even when we know it had experience downtime. The other is that the site has only been monitoring for 0 minutes at the time I took the screenshot. I tried a couple of others and got the same result. I therefore need to ask Prole Star: How is it possible that the owner of the Chinese Language website reported the crash, if Uptime Robot didn’t see it? Did he do it to make money or smear Jeremy Corbyn? No, of course not. The answer simply lies in the spiteful nature, stupidity and IT illiteracy of the Editor of the Prole Star, Maria Roberts.

The antisemitic writers of Prole Star

Maria isn’t the only writer at the Prole Star who apparently sees conspiracy whenever Jews complaints of abuse are concerned. They have run several articles that dismiss accusations of antisemitism inside Labour as a smear. Hardly surprising really given the editor, but she is not alone.  Patrick Millersland Dudley also writes articles for the online rag. Dudley is a member of the antisemitic Facebook Groups ‘Palestine Live’ and ‘Truthers against Zionist lobbies’. He has posted dozens of articles into the Palestine Live group. Here is one of the posts he has shared: 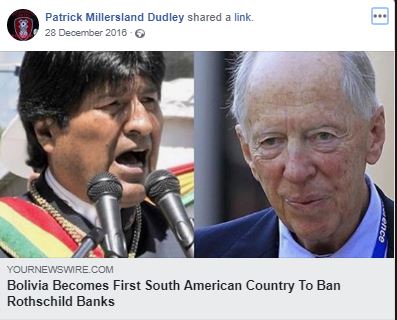 It is a Rothschild Conspiracy article from ‘Yournewswire.com‘, a website listed as ‘tin foil hat‘ territory. On Prole Star, Dudley has written several articles that touch on Rothschild Conspiracy. This one from October about ‘Genie Energy‘, relies on conspiracy websites such as Sott.net, to build the story. Like most lovers of conspiracy, he switches between right and left with ease: 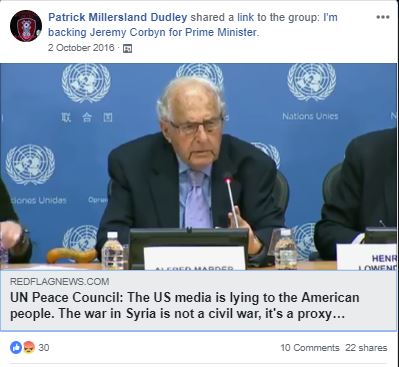 The article above is from ‘Redflagnews.com‘, a far-right website. It also appears on a list of fake-news sites. That’s not a quirk. Here is another one:

The article above on attacks Trump *from the right*.  The website ‘anotherdayinthempire.com’ is listed as providing ‘right-wing conspiracies‘. Many articles Dudley shares are from rabid ‘alt-right’ quackery sites. Here is another article he shared inside Palestine Live that suggests Israel is ISIS. 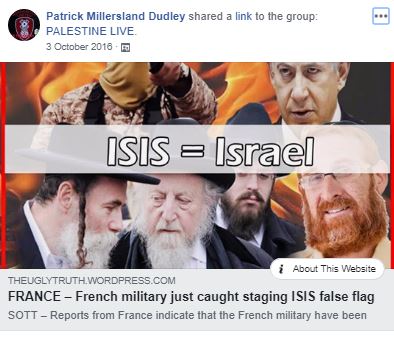 As anyone who follows this blog would know, ‘TheUglyTruth‘ is a hard-core antisemitic website, that pushes Holocaust Denial (Take a look inside – NSFW). This seems to be the type of ‘writer’, that appears on Prole Star. Martin Odoni, another writer on the site (also of the Canary), is another member of Palestine Live:

The smear tactics of the Corbyn cult

Why is all this important? Because this is how Corbyn’s cult operates. They speak of creating ‘another world’ but it isn’t a nice one. It is a place where they smear opponents to silence them and use hard-left and *extreme-right* conspiracy websites to spread lies. Maria Roberts actively ridicules Jewish claims of antisemitism. Yet in reality she knows nothing about Jews or Israel or Zionism. With clearly limited intelligence, she has decided that Corbyn would be good for the country and the pesky Jewish people are getting in the way. From that point on in her mind, everything is fair game. I produce thousands of examples of antisemitism, she cannot even be bothered to look. Instead, she publicly accuses me of fraud without a serious shred of evidence.

The Corbyn cult don’t need evidence, they need the smears. As we shall see.

The response of the cultists

Remember we can provide thousands of examples of antisemitism and yet Corbyn cultists can never see it. We can place screenshots of Holocaust Denial under their noses, and for whatever reason, they are too busy to notice. These people should be hard to convince – right? Wrong. All it takes is one silly article, based on nothing but smear tactics, and suddenly Corbyn cultists are wide awake. These smears are the only weapon they have. Take ‘wolfie‘. A Twitter account with over 18k followers. This is how he responded to the smear article:

He thought the smear article was great, yet this is how ‘wolfie‘ sees the thousands of examples of antisemitism presented by @gnasherjew:

So the accusations of antisemitism are smear tactics, but the hatchet job of an article that labels someone a fraud is ‘great work’? He wasn’t alone. There were several like this. Here is one other example. Carole-Anne is someone who hounds my posts. She automatically ‘bought’ into the smear:

Yet she is never convinced by the antisemitism on display, calling them ‘fake accusations’:

The point here is that it is a waste of time and energy confronting these individuals. They do not live in the real world and you cannot reach them with integrity and fair intentions. These people are either stupid or dishonest, they do not want evidence, they need the smears. It is the only thing that can keep them going. They do not have the intelligence to respond to carefully constructed arguments and so they reach for any weapon, however crudely constructed. Just like the one that the ‘intellectually challenged’ Maria Roberts created for them using smear tactics in her antisemitic rag. If you need to remind yourself every now and again, then just bookmark this page.

98 thoughts on “The smear tactics of the Jeremy Corbyn cult. A case study.”