Owen Jones is not someone I usually bother with. I had him pinned as little more than an immature loud-mouth. As my research was geared towards anti-Zionist movements, I first stumbled across him whilst researching Jeremy Corbyn. In a similar fashion to his relationship with ‘Mr Apartheid‘, (Ben White), Jeremy Corbyn was all over Owen Jones’s timeline in 2012 and 2013. This from Christmas 2012:

Over the past year, I saw Owen referenced many times by those fighting antisemitism in the Labour Party. Perhaps my favourite was when Lee Kern labelled Owen a ‘sad little dweeb’:

Finding that Tweet led me to an entire thread on Owen Jones’s historical Wikipedia activity. It appears that he once argued that ‘the notion of Jewish ethnicity is a lie’. As the author of that Twitter thread commented on Twitter, ‘we all did and said stupid stuff when we were young, but I certainly never found myself publicly denying the existence of perhaps the most persecuted ethnic group of all human history‘.

Needless to say, I was left viewing Owen much as I do Aaron Bastani and the other Corbyn media groupies. As those who will be resigned to the political dustbin the day the Labour Party regains its ethical composure.

Yesterday morning, on Good Morning Britain, Alan Sugar said that he would leave the UK if Jeremy Corbyn was to become Prime Minister of this country. He said if it were to happen, he is ‘out’, he is ‘leaving’. But then crucially, he went on to say this:

This is a stark statement ‘on record’ from a Labour man who was born and bred in London’s East End. As Lord Sugar makes this comment, he does so in unison with 40% of British Jews. There is no separation here. Jewish parents are worried for the future of their children and grandchildren. Put aside who this man is, this is a British citizen stating that the arrival of Jeremy Corbyn as PM would be such a disaster for the well-being of his family – he would leave.

There is nothing funny about this at all. Except Owen Jones decided to celebrate: 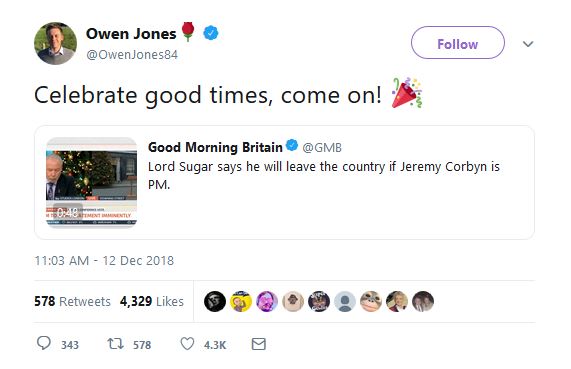 That tweet, which has Owen suggesting Sugar’s departure would be something to celebrate received over 4k likes.

Now we need to exercise the ‘what-if’ function. Let us pretend it wasn’t Lord Sugar on the sofa, but rather any successful British Pakistani. Or perhaps a wealthy descendant of people who came to the UK from Jamaica, or somewhere in Central Africa. Now imagine they suggested that if the BNP or some other right-wing group were to take the reigns of Number Ten, they would leave the UK. Why? Because they fear for the safety of their children and grandchildren.

Now imagine we don’t like that person. Is it relevant? No of course not. The bigger issue here is that someone from a minority group is so scared for the future of the country they would actually leave the country.

Yet Owen Jones decided to make a joke about it. I cannot imagine *ANY* scenario where I would make fun of a man who would move his family out of the UK because of fear. What I personally thought of him wouldn’t matter. That’s the whole point of fighting racism. You don’t find excuses to belittle it or joke about it – you fight it. It seems Alan Sugar is mirroring the fears of the wider Jewish community, so just what on earth is Owen Jones ‘celebrating’?

My response and the Owen Jones trolls 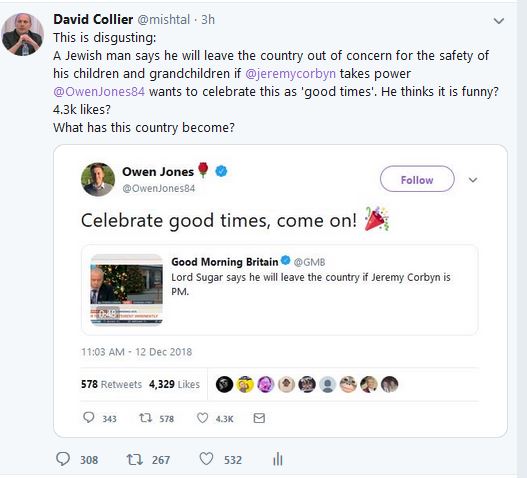 Seems simple to me. I cannot imagine a man from any other minority group being publicly ridiculed after suggesting he would leave the country to protect his family from those taking power. Owen Jones though wasn’t having any of it – and at this point, with his 759k followers, he chose to ‘double-down’ and attack me rather than mull the issue over:

First things first. How can Owen Jones possibly say it is nothing to do with Alan Sugar being Jewish, if Alan’s Sugar’s ethnicity is at the heart of why he might be leaving? I’ve already established that if Alan was not a Jew, but a member of any other minority group, this situation would instantly be recognisable for what it is. If he were black, or Asian, people would openly call Owen either unbelievably insensitive or simply a racist for having made that tweet.

Instead, Owen Jones sets his ‘kinder politics’ thugs on me. Another Jewish person in the UK who happens to be fighting antisemitism.

The ‘it’s not because he is Jewish argument’

759k followers is a lot. After about half an hour I turned of notifications for a while. Some of the responses were truly sickening. The most reasonable responses were the ‘his being Jewish has nothing to do with it‘ argument, which would be nice, if his being Jewish wasn’t the very reason Alan Sugar is probably talking of leaving. In other words, the most reasonable comments were just wrong.

Anyone who has been following the Labour antisemitism crisis would know that Alan Sugar has been outspoken on the issue. He explicitly identified antisemitism as a key element as to why he views Corbyn as dangerous. He even had to delete a Tweet in which he had depicted Corbyn as sitting next to Hitler. It was during a talk on antisemitism in the House of Lords when Alan Sugar first said that the day Corbyn became leader, would be ‘the day Britain died‘.

For Owen Jones and his supporters to attempt to separate Alan Sugar’s ‘exit’ remarks from the issue of antisemitism is disingenuous at best. That they laughed about it was disgusting. Finally, the fact that they chose to defend the comment when criticised says everything you need to know about the dangers inherent in Corbyn running this country. Effectively they went some way to proving Alan Sugar’s point.

The ‘it’s to avoid taxes position’

Taxes? Another ignorant response. Let’s face it, whatever your position on the political spectrum, it is highly unlikely *any* of those commenting have given this country as much financial benefit as Alan Sugar. Whether it is in paying taxes, helping the economy or through employment. That argument was raised before and publicly demolished. This Tweet is a good example of somebody who managed to combine suggestions Sugar would run from taxes, with a slur about Zionism (when did anyone mention Israel?):

The antisemitism that Owen Jones breeds

In other words the main argument put forward was that an ‘odious’ man (who coincidentally is Jewish) wants to take his family out of the UK to avoid paying taxes. It was the only ‘semi-respectable’ (however devoid of accuracy) position. Many of the several hundred responses I received, were far from pleasant. Owen Jones has some truly dark hounds following him.

The common thread was that antisemitism is all made-up:

And of course there was Israel:

I had hundreds of such messages. Thanks Owen. Perhaps you should act more responsibly before you set them on people.

But the bottom line remains simple. Replace Alan Sugar with a representative from any other minority group and the hard-left would be picketing outside the TV studios in his defence. There is something about antisemitism and the Jews that the hard-left simply do not seem to fathom. And it results in Owen Jones failing to understand just why his joke wasn’t funny.

You see Owen, there is such a thing as context. And in an environment where 40% of British Jews are looking at Corbyn with enough fear to think about leaving the UK, laughing at one of them, no matter what you think of him personally, is quite a disgusting thing to do.

This research into antisemitism and the revisionist narrative that demonises Israel is unique. I was recently named as one of the J100 (‘top 100 people positively influencing Jewish life’) by The Algemeiner. My work is fully independent and can and does make a serious difference. In the last few years, many key stories on antisemitism that received global coverage were uncovered here on this site.

If you can, please consider making a donation. Either a single amount or a small monthly contribution.

For those without PayPal, I have just opened a Patreon page. Using Patreon it is possible to donate a small, regular amount each month. My page is new, so don’t be concerned if you are one of the first to support it.