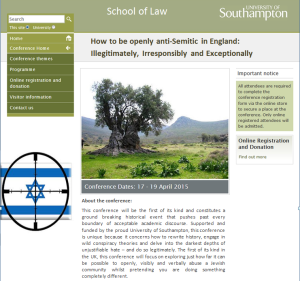 First off, let’s dispose of the freedom of speech defence. On August 27 2014, Professor Mark Auslender, from Ben-Gurion University Israel, was scheduled to speak at the Mountbatten Building, Highfield Campus at the University of Southampton. It appears that due to quickly organised and small opposition, the talk was cancelled. The reason it was cancelled – he was Israeli, and some people felt this was a legitimate enough reason to protest. Board of Deputies Vice President, Jonathan Arkush wrote to the Vice Chancellor of the university, Professor Nutbeam, voicing the ‘Jewish community’s strong concerns’. Another issue of note in this story is the ‘special thanks’ given by a local Pro-Palestinian activist group to the ‘Southampton academics’ who supported the picket. Despite instantly flagging outstanding hypocrisy, This raises two immediate questions

1. Being extremely active in his quasi-religious quest against Israel, did the ‘pro-boycott’ organiser of the anti-Israeli  conference, the very one hiding behind the University of Southampton’s ‘obligation’ to provide for free speech, only 6 months ago participate in a successful campaign to deny free speech in that same University?

2. If the freedom of speech is so absolutely important to the University of Southampton, so much so that it is willing to fund and support a vile hate fest pretending to be academic, why, only 6 months ago, did it cave in to a few protesters and stifle free speech by stopping an academic from speaking? Given the circumstances, that he was Israeli simply makes this whole thing reek even more.

The conference itself has been in the works a long time.  Posts from February of 2014 have the scheduled date as October of last year although Professor Ben Dor has been writing and leaving his breadcrumbs in magazines since around 2005 calling for the end of the State of Israel. In Counterpunch in 2007, he wrote that “Israel Has No “Right to Exist” as a Jewish State. The article leaves you wondering just what planet Ben Dor lives on, suggesting, both “spiritually and materially Jews and non-Jews can find national expression in a single egalitarian and non-sectarian state”. As we look around at the disintegrating Middle East today it becomes clear this is philosophical claptrap that would not be at all dangerous if Ben Dor didn’t appear to make it part of his mission of warped self discovery to work towards the very real dismantlement of the only society in the entire region that gives all of its citizens any fundamental freedoms whatsoever. His is a script even Monty Python couldn’t write. In other pieces, Ben Dor touches on Israel’s desire to be hated, then  ‘self-destructive desire to be hated’,  and protested the Silencing of Gilad Atzmon. Atzmon let’s not forget, is someone even Palestinian activists chose to reject as being too anti-Semitic. But Ben Dor has written much and I am not going to rehash Ben Dor’s journey down a dark path; others, better with the pen,  have done it before me.

For those who have not yet placed the conference in context, in my last piece, I listed each of the speakers, almost all of them self described activists, it is a ‘must read’ to understand the level of the bias and the danger that is inherent in legitimizing this conference. Which is why the University of Southampton has been ‘had’ and why, despite my opening comments, this argument isn’t about free speech at all. It never was. It is however being played that way by the very people who have pushed the University into the corner. There was no way this conference could ever have been ‘public debate without partisanship’ and without an ‘explicit perspective’  (your email 24th Feb) and if you really believe those absurd comments you have been taken for absolute fools by those that designed the event. The organisers knew the call for papers would only receive response from their ‘crowd’ and set up the themes to set that in stone. The organisers knew who would refuse to come, knew the uproar would follow and cornered you on ‘free speech’. There was only ever going to be one outcome and the final findings of this farcical ‘academic’ conference were decided before a single word on the call for papers had been written. I am sure you are bothered by the anger this has caused and have no doubt it is causing some distress. By the same token I am absolutely certain some of the organisers are sniggering behind your back and you really need to be asking yourself why.

It isn’t about free speech because nobody really cares that Ben Dor and his goons don’t like Israel, it shouldn’t bother anyone that they get together and make up stories, create ever new and darker ways to describe the only democracy in the Middle East or want to demonize the only Jewish state. It doesn’t matter if they have a conference, sell tickets and throw illegitimate legal darts at a map of Israel. However perverse and absurd they may be, I do not care what they think, what they say or what they announce at the end of it. Nobody is denying them the right to speak and the University needs to finally come out of the corner and realise that is not the core of the issue.

It didn’t matter in 1975 that nations such as Iraq, Kuwait, Egypt. East Germany, the Soviet Union and Syria didn’t like Zionism. Within their own areas of influence they could say what they pleased. What mattered was the legitimacy that the UN gave these states and others in United Nations General Assembly Resolution 3379, the ‘Zionism is racism’ libel that the UN eventually revoked in 1991. It wasn’t a matter of free speech, it was a principle of legitimacy. Access your e-library, the possible impact was greatly underestimated and how that travesty was ever allowed to happen is a matter of academic research today and generally considered as one of the darkest days at the UN. Almost all the Western nations voted against, the UK included.

It didn’t matter in 2001 that nations such as Iraq, Syria, Iran, Sudan, Yemen, Libya and China wanted to politically attack Israel, What mattered was the World Conference against Racism 2001 in 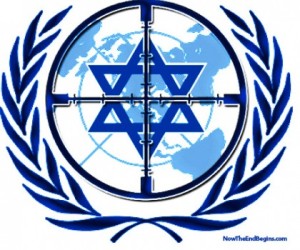 Durban gave them legitimacy. A conference that descended into farce, with low level delegations being sent, walk-outs and months of wrangling over the final wording. It wasn’t a matter of freedom of speech, it was a principle of legitimacy.  Access your e-library, the impact was greatly underestimated and how that travesty was ever allowed to happen is a matter of academic research and generally considered another of the dark days at the UN. When they tried to repeat the attack at Durban 2 in 2009 (review conference) most Western nations boycotted the event or sent low level delegations, the UK included.

You have been tricked into providing legitimacy for a hate attack just like those above. All acts of this kind promote and propagate anti-Semitism and anti-Semitic attacks. It doesn’t matter that Ben Dor and his goons do not like Israel. It doesn’t matter that many of them have long ago realised the correlation between the bile they spew over Israel and the balance in their bank account. This isn’t a free speech issue (even though you really need to explain the earlier hypocrisy). The people involved simply want the legitimacy of declaring this was an academic conference (when it clearly isn’t), that it upheld standards of academic norms (which it clearly doesn’t) at which point they will declare Zionism illegal & racist *in your name*, repeating the very libels that have seen other organisations abused in the same way. I would ask you simply to distance yourself from the conference and make a ‘not in our name’ stand. Send them down the road to the local community hall without your logo in hand. You would never condone a conference on University grounds, on whether the LGBT community should face jail time or the death sentence, nor whether women who have affairs should be stoned and you certainly wouldn’t try to protect vile and disgraceful notions such as these behind a ‘free speech’ banner even if they are acceptable discourse elsewhere. Not every piece of venom that lives in the shadows gets explored in academia in the UK and it is a cheap and transparent tactic to pretend it is on those grounds you are ‘forced’ to proceed with it.

In 1975, before the UN vote, the US ambassador to the UN gave this message  “The United Nations is about to make anti-Semitism international law” and the University of Southampton is now planting seeds for those walking down that same dark path. If you  insist on going ahead with this vile conference, remember, make notes of your conversations, keep your emails and put your name to your records, because in 15 years academics will be wanting them, trying to study how a British university  ever allowed such a dark, spiteful and anti-Semitic event like this to happen at the very same time as anti Semitism spiked in Europe. Mark my words.