On 2 October 1938, Arab ‘rioters’ infiltrated a Jewish neighbourhood in Tiberias. They first cut the telephone wires to frustrate calls for help. They then set about massacring innocent civilians. According to the British:

‘It was systematically organized and savagely executed. Of the nineteen Jews killed, including women and children, all save four were stabbed to death.’

There were about 70 armed Arabs involved in the attack, they set fire to Jewish homes and the local synagogue. According to Wiki ‘in one house a mother, and her five children were killed’.

Wiki doesn’t explain that the father, Shimon Mizrachi, was elsewhere, on guard duty protecting other families. Nor does the account give you the names and ages of those five murdered children. Ezra (aged twelve), Miriam (five), Yocheved (three), Samuel (two) and Hephzibah (one).

The Rachel of Kiryat Shmona

Kiryat Shmona is about 35 miles from Tiberias. A city in the Northern District of Israel, near the Lebanese border.

On 11 April 1974, terrorists from the Popular Front for the Liberation of Palestine (PFLP) attacked civilians in Kiryat Shmona. These terrorists first tried to attack a school, but there was nobody inside. Instead they attacked a nearby residential building. Rehov (St) Yehuda Halevi number 15. They went from flat to flat in a barbaric killing spree. Eighteen people were murdered, half of them were children.

Anisa Stern (47) was one of the victims, killed alongside her eight-year-old daughter. The daughter’s name was Rachel

Just a few weeks after the massacre in Kiryat Shmona, on the 12th May 1974, a group of fifteen to seventeen year old students set out on a field trip of the Galilee. It was three days before Israel’s twenty-sixth Independence Day. It was a large student group and they had made arrangements to spend a night at the Netiv Meir School in Ma’alot.

The same day, a group of terrorists from the Popular Democratic Front for the Liberation of Palestine (PDFLP) had infiltrated into Israel. They had attacked a van taking some Christian Arab women home from work, then having reached the city of Ma’alot, approached some residential buildings. When Fortuna and Yosef Cohen opened their door, the terrorists shot and killed the couple, and their four-year-old son, Eliahu.

Eventually, the terrorists reached the school. The terrorists entered the building at about 4 a.m. Some students jumped from windows, but 85 students and several teachers were held hostage. When the Israelis attempted a rescue, the terrorists opened fire on the students. Twenty two of them were slaughtered.

None of those 22 students were to grow up. One of them was called Rachel. Rachel Afita was just sixteen when she died.

An exercise in telling in detail the individual stories of all the Jewish Rachel’s, who were not permitted to live out their lives because of anti-Jewish hatred, would be a mammoth task. The three above are just an example of lives and families ruined because for some, Jews have no place on this earth. Here are some others:

The list could have been much longer, two Rachels died in Italian bombing raids during World War two, and several died in the civil and regional conflict of 1948.

The Rachel with a name 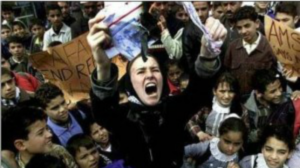 All of those names above, died as victims of hate. All had stories to tell, and were never given a chance to fulfill their promise. None of them did anything that contributed to their death. Each and every one, was an innocent victim, slaughtered by ideologies of hate. One ‘Rachel’, who is not listed above, has been used to impose a false narrative on a gullible audience. Today, if you google ‘Israel, Rachel and Terrorism’, then ‘Rachel Corrie’ will probably return as the first result.

Rachel Corrie’s death was tragic, but it was an accident created by terrorists who rely on anti-Israel propagandists to distort the minds of vulnerable young Western minds. Lies are spun, hatred is fueled, and in the end, young fools line up to protect terrorists against liberal democracies in the middle of a conflict zone. One of those people was Rachel Corrie.

I do not need to go over again, the true events of Rachel Corrie’s death in detail. Others, such as Melanie Phillips, have recently posted blogs detailing the level of distortion involved.

Corrie was not a victim of terrorism. Nor was her death deliberate. Corrie was a victim of anti-Western radicalisation, that resulted in her accidental death. This occurred only after she had lost all sense of right and wrong. If you have experienced a death that wasn’t your fault, then it might be a good idea to check out someone like this Nehora Law Firm who might be able to help you get the compensation that you deserve.

Anti-Israel propagandists are never interested in what really occurs when incidents like this happen. Their only concern is how an event can be distorted to maximum effect. Enter those who wrote the play ‘My Name is Rachel Corrie’. Based on a diary of a brain-washed activist, the play sets out to vilify Israel and claim Rachel Corrie was deliberately killed. It is false and provocative and it incites, through fanning flames of hatred. The play was edited by Alan Rickman and Katharine Viner.

Rickman and Viner did not attack the terrorists, nor did they attack the organisation who sent her out to her death. They didn’t even take the creative opportunity to look into the dark truth of radicalisation. This play should have been discarded long ago as political propaganda. It is shameful the Young Vic chose to show it. As antisemitism is rising in Europe, a political propaganda play full of lies and hate against Jews is showing in London. Another sign of the times.

Credit is due to Richard Millet, who inspired this blog with his Twitter campaign #mynamewasracheltoo. Credit also must go to various online bloggers who have in the last ten years, spoken of other Rachel’s in blogs – and with one eye on the ‘Pro-Israel Bay Bloggers‘ website- whose research was also used in tracking down some of these stories)