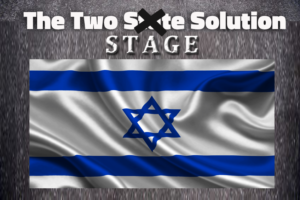 Israel and the Two State Solution. If not now when?

For decades Israel has been caught in a violent catch 22, with people outside of the immediate conflict zone, working to toxify the environment. The two state scenario has proven to be a rabbit hole that simply perpetuates an already complex situation. This has allowed space for the radical terrorist groups to repackage themselves as a movement of humanitarian concern (BDS). It is time to change the equation.

How do you make peace with people, who by and large, refuse to accept the presence of Israel? In reality this question is not ours to answer. If it were in our power, if it were down to what we want, the civil conflict in British Palestine would never have started. Even if it had, even if partition was refused in 1947, peace would have been made following the first Arab/Israeli war in 1949. Look around you at the world we live in, we, as Jews, never get to decide when we are accepted.

In September 2000, I was in the West Bank conducting business in Bethlehem, Jericho and Ramallah. Just weeks, days, before the second intifada broke out.  So if the two state question is placed before me, I will start with the impact of Oslo’s failure.

Before Oslo, right and left wing in Israel were well defined. Arguments over ‘land for peace’. As Oslo began to implode, people stopped believing in the equation. This led to the collapse of the traditional Israeli peace block. What this means is that opposition to the two state solution is not necessarily embedded in the left /right political spectrum. This is an issue of believer and non-believer. Oslo becomes a faith.

This in turn has led to a massive misunderstanding and misrepresentation of Israel’s position. You can want to find peace, be prepared to give up land but simply not believe in the process itself. My position, like many Israelis today is that of a liberal, humanitarian non believer.

Oslo was a semi-negotiated process that ended in a deliberate outbreak of violence. Oslo attempted to unwrap a parcel from the inside out. It played a kick the can down the road approach with any issue considered problematic. It believed that by simply picking the low hanging fruit, everything else would sort itself out. The two state process was an exercise in naivety.

So now to how I see the underlying problem. By the late 1930’s the Arabs of the British mandate were internally leaderless and directed from the outside.  Between 1949 and 1967, power was consolidated in Arab capitals outside of both the west bank and Gaza.

Nationalism was fostered in the camps inside Syria and Lebanon.  It could not be done inside Gaza or the west bank, because they were mandate lands already in Arab hands.  An external nationalism that focuses on pre1967 Israel and considers the west bank and Gaza irrelevant.

Because this identity never had a natural leadership to define it, it took orders from wherever and whenever they came. From Assad in Syria, Saddam in Baghdad, Nasser in Cairo, Nasrallah in Beirut.

This is a nationalism that sees Gaza and the West Bank as pawns. So if you do anything to empower it, then it will use this power against you. If you bring Arafat from Tunis and suggest creating a peace process built on mutual recognition, you end up with bus bombs throughout Israel. If you dismantle settlements, pull out completely from Gaza you end up with rockets fired over all your major cities.

This poison has been drip feeding the conflict from the beginning.

A couple of months ago I was talking to a student at SOAS, she was born in Britain. I asked about her parents, they were born in Pakistan.  This girl describes herself as a ‘Palestinian refugee’. I heard another student with a British passport call herself a ‘Palestinian refugee’ at an antizionist conference in Exeter late last year. Just a few weeks ago I was inside Birkbeck as someone described a dinner party she held. Around the table had sat 12 people, each with different passports. Some didn’t speak Arabic. Each one labelled a refugee.

Many of the refugees are Jordanian citizens. Many already live within PA areas. Children are being born today in Lebanon whose parents and grandparents were born in Lebanon. Others claiming to be Palestinian refugees or displaced people have passports that are Canadian, Australian, American; each reflecting the nationality of their parents.

Syria is a refugee crisis. The ‘Palestinian refugee’ was forged as a weapon. An artificial entity created inside a paradigm of no to normalisation that exists only to stop any settlement.  And as demographics in the west changed, this internationalised weapon took hold here too. Today it spearheads BDS. Yet another external movement that does not care about the wellbeing of the people inside Ramallah or Gaza.

So if not now when? You will never solve anything until you stop the dripping poison from entering the wound. First the refugees, then everything else. Unwrap this parcel from the outside – in.

This is not a two state solution; it is a two stage solution. Tell the British born girl she is British. Tell those with Jordanian citizenship they are Jordanian. Scrap the working definition of a Palestinian refugee. Dismantle UNRWA and tell Lebanon that after 70 years it is about time they stop abusing the human rights of those within their borders.

Taking an addict and feeding both his addiction and his delusion simply because everyone is afraid to tell them the truth is abuse. Wanting to end the saga of refugees inside places like Lebanon, is a humanitarian cause. Kicking the can down the road only ensures the conflict continues and Israel remains trapped in a perpetual catch 22, with those on the outside working to permanently toxify the environment.

If you insist on permitting the artificially sustained and hate infested desires of those outside to dictate the basic terms of the discussion between the Jew from Jerusalem and the Arab from Ramallah, you will always exist in a deteriorating environment with little prospect for any type of lasting settlement.

So if the basic question over the issue of the two state solution, is to ask me if I believe in simply ‘kicking the can down the road’? Then my answer is also simple. No I do not.

(This was the basis of a speech written for a Campaign4Truth debate in London on 5/5/2016 on the Two State Solution. It is the subject for a book called ‘the Two Stage Solution’, focusing on my ongoing research, that hopefully is due to be published later in the year.)

Keep up to date, subscribe to the blog by using the link on the page. Follow the FB page for this blog: and follow me on Twitter. Please if you can, also consider making a small donation. Research is expensive and time consuming and whilst I do what I can, there are serious constraints that impact on what is possible.

24 thoughts on “Israel. The two-stage solution”