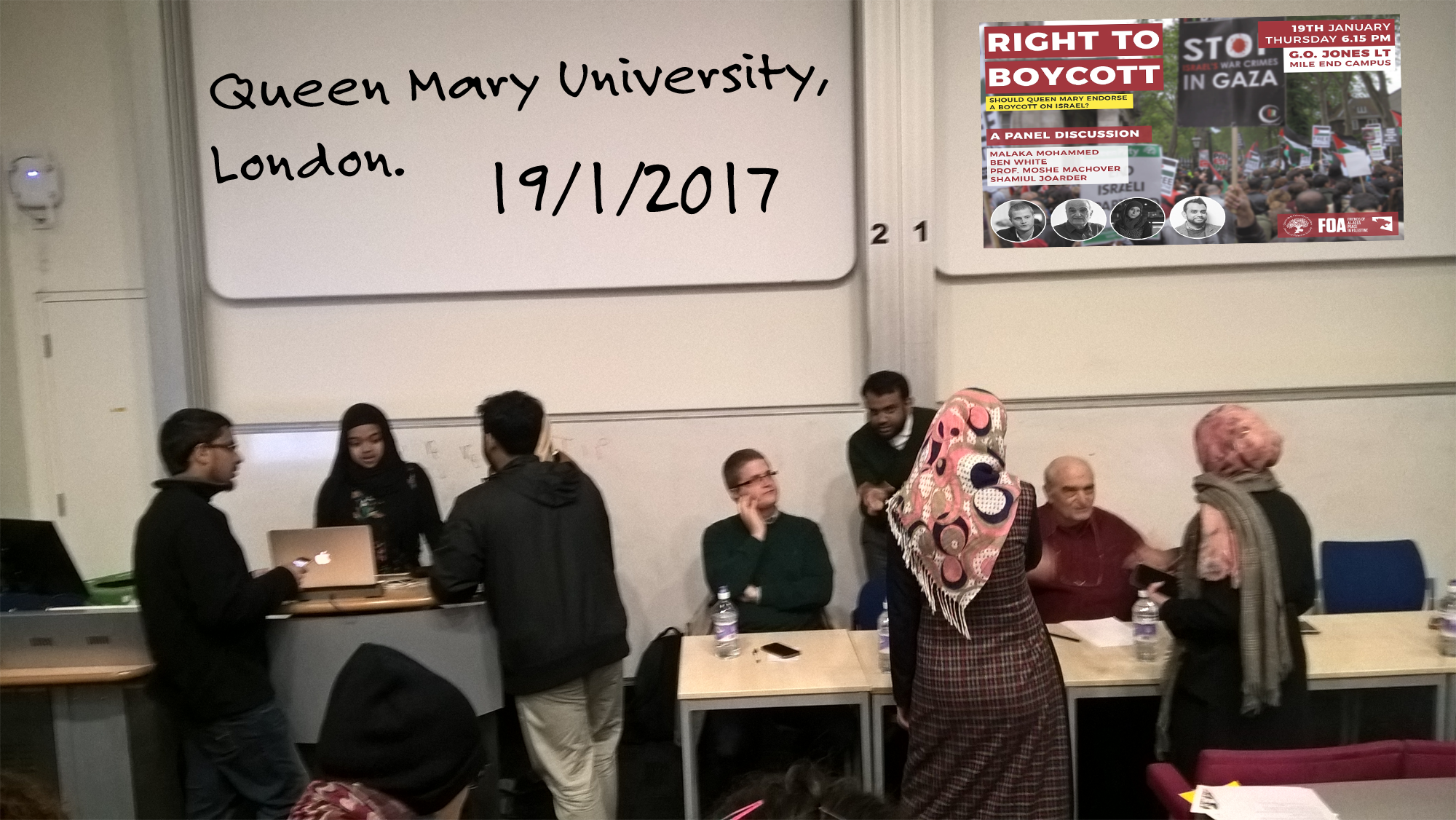 Helpless before the hatred at Queen Mary University of London (QMUL) 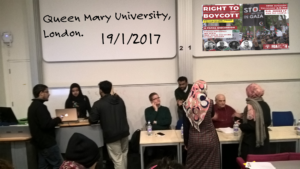 anuary 2017. QMUL. This was my first anti-Israel university event of 2017. The start of an extremely busy time in the annual calendar. Apartheid Week, an intensive period of vicious anti-Israel activity on campus is only a month away. To highlight this intensity, this was one of only three events taking place I could have chosen. The other two were at SOAS, and Salisbury.

It was also my first event since Al -Jazeera launched a visible attack on British Jews, via an undercover operation driven from within a deeply antisemitic paradigm. As I pointed out at the time, even though sane people watched the show and saw nothing, for the antisemite, the show was the delivery of proof of Jewish conspiracy.  So how would this play out on the UK campus?

The event itself was at Queen Mary University of London (QMUL) campus, ‘discussing the BDS movement, its impact and importance’. Hosted by the QMUL Friends of Palestine Society, it was a Friends of Al Aqsa (FOA) event, and a bag of FOA material was handed out to all attendees.

On the panel was Ben White, Malaka Mohammed, Prof. Moshe Machover and Shamiul Joarder. The range of hate that lines up against Israel. Islamic thought, the Palestinian, the Marxist Jew, and well, the other, the British guy who attaches himself to Islamic thought and Jewish Marxists, to push a highly dubious and quintessentially hypocritical humanitarian cause.

The evening began with a short clip. I have provided just 10 seconds below, all that is needed to highlight the disgraceful distortion of history that is behind the BDS campaign:

Notice the conflict begins in 1948. There is no history here, no Jews living in the land, no Balfour, no partition. But then the really abusive twist. Notice the attack comes from the outside. In 1948, Jews invaded Palestine with tanks and ethnically cleansed the Palestinians. The historical reality was that the only invading tanks in 1948 were those of the Arab armies who had come to commit genocide against Jews living in British Palestine / Israel. This lie is vile, shameful, and being shown on a university campus near you today to persuade students to boycott the Jewish nation.

Yet the evening had only started. What I witnessed at QMUL was a disgrace. A room full of people, almost all of them fully believing, that the Jewish students of QMUL were planted operatives instructed by another government. Jewish students who had turned up, *on their own university campus*, to argue against lies being spread by a vicious propaganda machine were in the eyes of the audience, foreign agents, spies. The classic role of ‘the alien Jew’

The attack did not only come from the audience, it was driven from within the panel. The first question came from someone wearing a Jewish head covering, who questioned why BDS was so single minded, in focusing only on Israel. The response he received, rather than a direct answer, was truly shocking:

These Jewish QMUL students were visibly shocked by the treatment they received on their own campus. Once the panel had given these students such disrespect, the audience followed. At one point, a member of the audience who had told them to ‘f..k off’ because they were ‘Zionists’, began dealing with the way one of the Jewish student looks. “She is actually good looking”, “you don’t suit your looks” “It’s a shame your attitude don’t match your looks”, giving them the ‘one fingered salute’ and so on.

The Al Jazeera ‘documentary’ was referenced in several questions, and was brought up by most of the panelists. It was an undercurrent through the entire evening. I always think it is these FOA events that expose the humanitarian pretense for what it is. On a question about Al Aqsa mosque, there is talk about “fantasy Jewish temples” Jerusalem is described as a city that has “historically not been out of Muslim hands for more than 100 years”, Jewish people wanting to pray on a site they too consider holy are called ‘infiltrators’, and someone actually suggests what is needed to free Palestine is the “Islamic community of Muslim militaries”. One can only guess as to what specific groups he was referring to.

And the panel, who are there under the guise of supporting equality and justice, simply promote boycotting Israel for whatever reason is in the head of the people in the audience. Anti-Israel thought is never tempered, never moderated. It is always fuelled. It would have been easy for any one of the panel to deal with the ‘fringe reality’ of third temple extremists, but that defeats the object. Israel is guilty of all crimes, of every disease, and must be removed. Even so it seems if they need the help of the “Islamic community of Muslim militaries”.

I have spoken before to Ismail Patel, founder of FOA. He speaks of Muslim ownership, of allowing Jews only within the umbrella of Muslim supremacy. FOA only use BDS as a tactic to bring about their goal of Islamic control. This is the part of the Islamic stream that lines up against Israel. And sitting on a platform with them of course is Ben White.  How can anyone speak against antisemitism at the same time as they align themselves with movements that are clearly about Islamic control and Jewish subordination.

There is a visible deterioration in the situation on campus now and I am deeply concerned about the environment for Jews on campus within the UK.  These Jewish students were not in 2017 UK anymore, they had entered a den, where women are mere objects, Jews are spies, ‘Islamic militaries’ should destroy Israel and all counter opinion is rejected.  This is the campus of the Queen Mary University of London.  Do you know what is happening on your local campus?