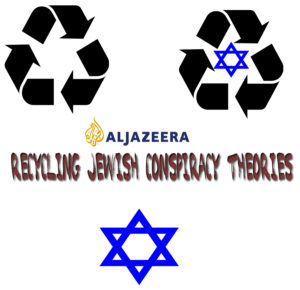 Today was the fourth and final installment of the Al Jazeera ‘documentary’ called ‘The Lobby’. The “undercover report exposing how the Israel lobby influences British politics”.

For those that haven’t seen it. The show came in four, 25 minute videos (1, 2, 3, 4). Highly repetitive, extremely drawn out, with about 5-8 minutes of content in each one. The sinister music and hidden footage feel, create the atmosphere you are watching something illicit. After a while you realise that despite the eerie music, the accusation itself is empty.

Viewing figures tend to agree with me. Whilst the first show on YouTube has already reached nearly 100,000 views. The Second sits at 24,000, the third 16,000 and currently the last show has only been viewed 3,000 times. Everyone soon realised there was no meat on this bone.

Far too often, as I watched, I simply couldn’t understand what was wrong with what I was seeing. This difference, between my recognition of everyday political actions, and the attempt to suggest that we were witnessing the inside actions of a powerful conspiratorial story, highlights exactly what was wrong with the show itself.

The idea, the premise, could only have been formulated within an antisemitic mind-set. The ‘undercover reporter’, Robin Harrow, spent six months looking for evidence of something that quite simply does not exist. His findings are disjointed pieces of a picture of a UK Jewish community that is deeply connected to Israel, put together haphazardly by the mind of an antisemitic conspiracy theorist.

In a excellent take down of the ‘expose’, Marcus Dysch, Political Editor at the Jewish Chronicle, called it “harassment of Jews dressed up as entertainment”. Jonathan Hoffman, in a piece on Harry’s Place, broke his analysis into three central complaints, brilliantly summing up the show as ‘voyeurism For antisemites’.

In essence, the entire show hangs on a single sentence. Six months of undercover work, numerous events, scores of meetings, untold hours of networking, and they caught one ‘take-down’ comment on camera. Even then, it was spoken by a junior member of the Israeli Embassy staff with an over-inflated opinion of himself and a dubious command of English.

Trust me, undercover work is what I do. If I had six months, professional assistance and proper funding, I know that what I would put together would do major damage to the anti-Zionist camp in the UK.  They had six months and found nothing. I have real material to work with. They don’t.

Andrew Billen in The Times said this:

“For the life of me I could not see what Israel was doing wrong here. The Lobby sensationally exposed the existence of, well, a lobby.”

So, what was this all about? Yes, the focus was on one embassy employee, but that was not the point. He was just the eventual conduit and you cannot write history backwards. An important point to remember is this: when they started, they could not have known which way this was going to go. The intention was to damage the grassroots, the strategy to weaken the fight against antisemitism, and the goal was to suggest British Zionists, one way or another, are all paid puppets of the Israeli State.

The anti-Israel (pro-Palestinian) movements in the UK have been damaged over the last 18 months, due to their inability to separate themselves from rabid antisemites. If they did not want to operate from a drastically weakened platform, they needed the tools to protect the antisemites. The ability to deflect the accusations, to continue to work unhindered by such ‘petty’ issues such as racist abuse against Jews.

Therefore, this was a deliberate attack on British Jews by a state funded, state owned, news outlet from Qatar. And in return, those who have found themselves politically weakened by antisemitic accusations, such as Jeremy Corbyn, are clamouring for the government to investigate Al Jazeera’s baseless conspiracy theory. The first opportunity Corbyn had to sell out the Jews to regain some political power, he has taken with both arms raised. Dancing with him on the table are people like Jenny Tonge, Ben White and Jackie Walker. I hope he enjoys the company.

This type of antisemitic suggestion, that Jews conspire and rule the world, is still common in the Middle East. Yet, Al Jazeera was operating inside the UK, attacking British Jews with a highly antisemitic brush. If I had one major accusation outside of the Al Jazeera team, it would be that the Mail on Sunday promoted the Al Jazeera ‘expose’ with front page cover just four day before broadcasting.  What on earth possessed the Mail on Sunday to jump into bed with Qatar, antisemitism, Electronic Intifada and Jenny Tonge against what is just a group of people who all share similar western values together?

The two details worthy of note came in the second and third installments.  The first was a confrontation between Labour MP Joan Ryan, and Jean Fitzpatrick an anti-Israel activist. The entire confrontation in my opinion, was a set-up. Fitzpatrick is a hard-core activist. If she was politely asking questions about settlements, it was because she was on a mission. In any event, we also only see part of the footage.

What we do know is that Fitzpatrick, who was investigated and cleared, was not the only incident. We hear that “”one nutter came up and basically said that the coup was run by Jews, and Jewish MPs and Jewish millionaires.”  we know also that “others suggested the creation of the antisemitism scandal was merely part of a plot”. Even if the comments from Fitzpatrick are arguable, the atmosphere surrounding the stall may have already been toxic.

In any event, consider this, we have two non-Jews arguing over what they consider is antisemitic, and a state funded Arabic TV station showing some of the footage of the exchange to suggest a conspiracy in which antisemitism in Labour does not even exist. I am sure that Jackie Walker would be horrified, if someone tried to use the inability of two white people to ably identify the boundaries of racism, to discard all claims about the existence of all racist abuse.

The second incident left me feeling physical sick, and was the conversation between the reporter and Jewish Labour Movement Director Ella Rose after the antisemitism meeting at the Labour Conference. As David Hirsh put it “Al Jazeera’s spy pretends to comfort a Jewish woman who is in tears after experiencing antisemitism, secretly videos her exasperation, then runs off to his pals to help them edit his footage into an antisemitic documentary.”

Ella Rose “formerly worked” at the Israeli embassy. Apparently, if you work at any time for the Israeli embassy, you are forever tainted. According to Al Jazeera, Jackie Walker and co, this is proof positive you are of evil intent.  Once this ‘horrifying’ detail about her past life was uncovered by Asa Winstanley, Ella suggests Jackie Walker  ‘slammed her all week’ on social media. This is the life of those that choose to work within the Jewish community in this way. They become stalked, investigated, the prey of the antisemite.

Then much was made of her post abuse comments. When I saw this footage, it seemed to be that of a victim, trying to rebuild, to retake ownership of her pride. So I asked an expert. This from psychotherapist Amanda Perl:

“This fantasy or rehearsal that she talked about is simply a way of overcompensating for feeling dis-empowered, scared, humiliated, inferior and ashamed – it’s as if she has been left looking like a coward, not dealing appropriately or how she wanted to in a situation – she is simply with such words trying to overcompensate for being seen as ‘weak’. This overcompensation its a coping mechanism”

So, not only do Al Jazeera take hidden footage of a victim of antisemitism. They then use a natural response of a victim, a response nurtured in clinics for abuse victims around the country as a way of overcoming abuse, and they turn her into the abuser as part of an antisemitic documentary. Currently, because of Al Jazeera, some antisemites are further fueling the abuse against Ella. Everyone involved in this, including those who commented on it, or sent vicious messages via social media, are assisting in further abusing a victim. This Al Jazeera action needs to be thoroughly investigated.

This was a heavily funded, antisemitic attack on British Jews by a Qatari funded state news agency. As at times, we saw footage from different angles in the restaurant, we know there was more than one cameraman involved.  We know that Shai Masot was probably drunk on at least one of the occasions he was on camera. After six months of investigating, it is safe to say they found nothing.

We know that sending MPs to Israel is a lot better for ‘fact finding’ than sending them to ‘Palestine’. We know that MPs that go to Israel are at least given a grounding in the truth of the conflict. Why don’t Al Jazeera investigate themselves? Or better still Caabu:

At many events I go to, I hear of MP’s having been taken by anti-Israel groups to Palestine. I hear of groups taking them. It never crossed my mind to take the footage, edit it, and turn it into a conspiracy. Others have written the bottom line already about this antisemitic show.  It is a disgrace. It is also disgusting that some politicians are using the product for their own political gain. We know these people bully Jews and they further smear them, by pretending the victims are the abusers.

We are a community at war. In an environment that is deteriorating. There is nothing imagined about it. We are now entering an atmosphere in Europe where torching a Synagogue is no longer seen as an attack on Jews, but rather an expression of frustration against Israel. We are no longer at the top of this slippery slope, but have begun a descent. Be alert.