If you got to page ‘x’ in the new Amnesty ‘Apartheid report to argue about a comment in paragaph ‘y’, that contains a reference to Israel doing ‘z’ – you are already more than half way to losing the argument. This is about the clear big picture, not the distorted little ones – and engaging any accusation that comes from Amnesty is a waste of time.

You cannot possibly care about justice if you protect and promote the judgements of a crooked system. And Amnesty’s reports on Israel come from a system so dark, crooked, one-sided and filled with hate, that they’d be more suited to the 15th than the 21st century.

Just a few reminders why:

Saleh Hijazi is a key figure in Amnesty’s lynching of Israel. Unbelievably they made him a ‘Deputy Director’ for the entire MENA region. In reality he is a lifelong Palestinian anti-Israel activist. In 2007 he was part of a group called ‘Another’ Voice‘ – which was set up to oppose the peace movement called ‘One Voice‘. This is taken from their website at the time:

That isn’t even the worst of it. His Facebook profile pics have included Leila Khaled, a PFLP terrorist and airline hijacker and Khader Adnan, a hero of Islamic Jihad:

Laith Abu Zeyad – is another key Amnesty voice – and guess what – another lifelong Palestinian anti-Israel activist. He and Hijazi helped put together the Amnesty attack on Airbnb, so have no doubt they are both involved in this latest attack. Here is an image of him retweeting a revolutionary socialist group in Egypt that has ties to the Muslim Brotherhood. It was about the death of Morsi, a leader of the Muslim Brotherhood.

Before Amnesty, Abu Zeyad worked for the ‘PFLP affiliate’ Addameer.

Hind Khoudary – was Amnesty’s voice in Gaza until I exposed her extremism on this website and they were forced to publicly distance themselves from her. These two ‘heroes’ in the post are both members of the Islamic Jihad terrorist group. 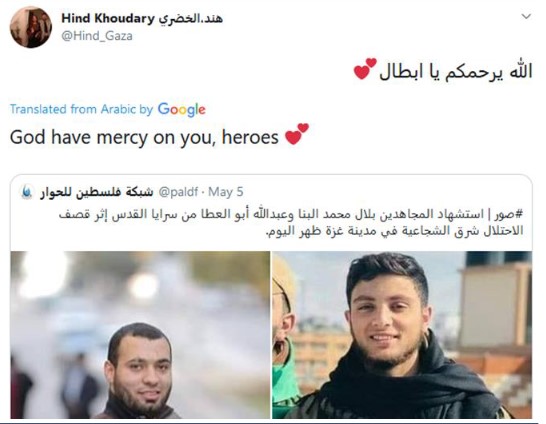 Khoudary also retweeted this – which instructs people to lie to protect the resistance: 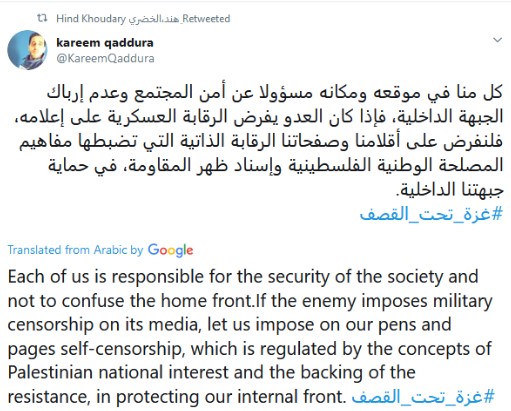 So it is no surprise that in 2020 Khoudary tagged three Hamas officials to betray someone in Gaza who was working on a peace project. Hamas then arrested him for “betraying our people.’

Mohammed Ali Abunajela was Amnesty’s ‘Media Manger’ but was just another Palestinian activist. On the Israel page of the Amnesty website, he was referenced alongside Sara Hashash for media enquiries. Which means if you are a member of the press and wanted information on Israel, Amnesty were directing you towards a graduate of the Hamas driven Islamic University in Gaza. This guy was nuts. His tweets included several from Sarah Wilkinson (a Holocaust denier).  But it was this section in a FB post he wrote in 2018, that really got my attention.

The post addresses the 2018 March of Return and raises suggestions to ensure its success. It suggests that ‘martyrs’ should be called ‘martyrs of the march of return’ and not be ‘claimed’ by ‘factions.’ In other words, it is suggesting that Hamas and the Islamic Jihad should refrain from publicly claiming ownership of fighters when they are killed by Israelis, to ‘hide them’ as innocent protestors who have been killed. All in order to positively influence international opinion. This appears to be the Amnesty International Media Manager for MENA asking terrorist factions such as Hamas and the Islamic Jihad, to ‘play along’.

Ashira Prem Rachana worked as a journalist and researcher for Amnesty. One of those people who decides what evidence to find and then writes about it in reports. Actually, she is just another lifelong Palestinian activist and was a presenter for the Palestinian Broadcasting Corporation in 2010. By 2017 she was a ‘Regional Researcher’ for Amnesty.

Ashira publicly called on Arab Israelis not to vote in the elections. She told the ONLY free voting Arabs in the entire Middle East – not to use their vote.

Nadine Moawad Amnesty MENA Communications Manager calls for the full disbanding of Israel (and the military that protects the Jews from harm).

Sahar Mandour Amnesty International‘s researcher on Lebanon wastes no time in letting people know she is unfit to work at a human rights organisation:

There are too many ‘unfit’ people to list here (it is why it took a 207 page report to do it), but I want to show one more image because it highlights the Amnesty problem more than any other. If for well over a decade Amnesty has been explicitly employing anti-Israel obsessives – then what about all of the people who are actually in need of Amnesty’s help? 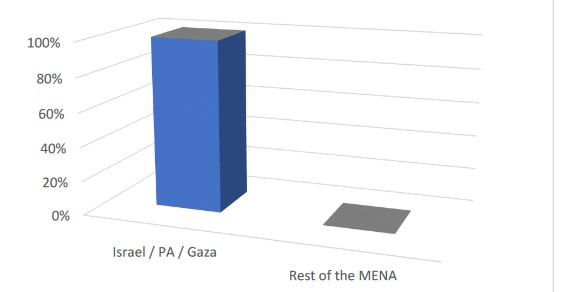 Not a single post relating to Iran, Syria or Saudi Arabia was found. Israel, a nation involved in a conflict that claimed about 90 casualties in 2019 took 100% of the attention of a MENA Director for Amnesty. That is the true crime here. A total betrayal of Amnesty donors – and even more tragically – of the people in need they are meant to be helping. Amnesty has just turned into an obsessive and antisemitic organisation.

Would you trust a report about Israel written by people like this? Would you accept their judgement? Amnesty is only the sum of the people that work for it and what is written above is only a fraction of what I found when I investigated Amnesty’s bias.

I write this today as Amnesty publish another report on Israel. If you want to see a take down of the latest Amnesty report – you can read what CAMERA and NGO Monitor have to say.

But if there is just one report you read today make sure it is the one which thoroughly exposes Amnesty’s crooks. And believe me – however bad  you think Amnesty has become – it is worse.

35 thoughts on “Beyond Crooked. Meet the Amnesty judges and jury”