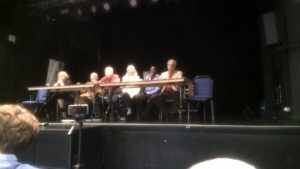 Last night, I went to an event at the student central in Malet Street organised by supporters of the Labour Party. Part of the Birkbeck campus. The event was titled ‘Antisemitism, Zionism and the left’. The purpose was to address the ‘witch hunt’ taking place against anyone who criticises Israel. Something that is seen by some as part of a co-ordinated attack to unsettle Corbyn and remove him from power.

Given what was said, it is clear that Corbyn’s issue with antisemitism runs far deeper than a few councillors or MP’s. There were about 150 people there. Had there been a vote, every single card carrying Labour member present would probably have agreed, reposted or repeated, every single comment made by those suspended. Antisemitism is not a comment made in careless anger by these people, it is embedded in their world vision.

The panel was made up of 6 speakers.

The problem started with an information sheet give out on entry. An unsigned charge sheet that asserted “Labour does not have a problem with Jews”. Except in a page of about 600 words, the word antisemitism was only used once, and in ‘quotes’. When Islamophobia was mentioned, it was given no such disservice. Which pretty much lays out the theme of the whole evening.

The first speaker was of course Jewish, it is always the way. The ‘asajew’ strategy. Hold up the naïve fools, the great enablers and provide yourself with legitimate cover for all the hate that follows. Ben Dor, Atzmon, Blumenthal, Pappe, Barkan, anyone from JFJFP. A mixed bunch of self-haters, conspiracy theorists and useful idiots. The priceless commodity of the antizionist camp. 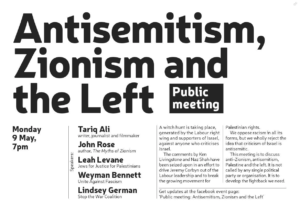 Another one of these was also present, Walter Wolfgang, a veteran Labour Party activist. Walter’s contribution was to give a historical account of antizionism within world Jewry 100 years ago. This classic argument is devoid of all merit. It is like suggesting someone who does not want to have sex, someone who is against abortion and someone who opposes murder are all taking the same position. Opposition to Zionism in the backwaters of Russia in 1891, is not opposition to Zionism in 1925, nor quite clearly, opposition to Israel in 2016.

The larger issue is in the tale of those that opposed. Arthur spent much time detailing the Rabbinical opposition to Zionism in Odessa before the turn of the century. Laying out that many of those communities opposed the idea of returning to Zion. Walter of course does not carry the story through to the bitter end. Most of the communities he references were to starve in the Soviet Union or burn in Auschwitz. Given history, it is absurd to search for ideological support amongst communities that were to face genocide just a few years later. Their fate is evidence the Zionists were onto something. Or put it the other way, if Zionism was rejected by more, then more Jews would have died. Walter continually references ‘Jewish values’. I have heard this worthless comment before. ‘Never Again’ means something within the context of Zionism, as I look at him blindly praising and accomodating those that hate, some values we are better off without.

The whole event was all about the legitimate right to criticise Israel. Built around a flimsy straw man. Nobody, but nobody has *EVER* said that all criticism of Israel is antisemitsm. The argument goes of course, that once you dismantle the point, once you show that such an absolute stance of negating all criticism is unfair, then your side has won. The twisted logic then follows that antisemitsm is not present in ‘all criticism’ of Israel. Simply absurd.

According to the panel, it is okay to suggest that Israel has so much political control of the UK, that a new ambassador can create a witch hunt against innocent Labour members who simply support Palestinians. (Lindsey German). That antisemitism only really exists on the right (Weyman Bennett). That Zionists can’t find any archaeological evidence to support biblical claims (John Rose). That Israel sent a physical order out to its diplomats to call all criticism of Israel antisemitic (Tariq Ali). That antisemitism didn’t exist in the Middle East before Israel (Tariq Ali). That calling for an end to Israel is okay (pretty much everyone). That Israel is responsible for antisemitsm (almost everyone). To greatly exaggerate and demonise Israeli actions (absolutely everyone).

John Rose also used the quote by Maj. Gen. Yair Golan to show that Nazi analogies are acceptable. After all, he suggested this is the way some at the top of the IDF think. (Golan did something stupid, and we should use that lesson to highlight that many in Israel do not understand the global enemy we fight.). You can see this in the video.

Then after speaking for a few minutes each, in the spirit of good comradeship the microphone began to move around the floor. One after the other repeated the sentiments of the panel. ‘It is a witch-hunt’.  ‘Antisemitism is a right wing disease’. ‘Left wingers hate all forms of racism, especially Islamophobia’. Over and over again, ‘Islamophobia’, ‘Islamophobia’, ‘Islamophobia’. Several suggested ‘hiding the hate’ might be a good idea for tactical reasons (something to bear in mind). Eventually, someone said it, this whole episode isn’t even about antisemitism, it is about Islamophobia, ‘they’ (I assume Zionists?) ‘are using this to attack Muslims’. Loud applause.

A special mention needs to go to Jonathan Hoffman. Jonathan is a vocal Zionist presence at some of these events. When the microphone arrived at his door. He made full use of it. You can hear his comments below. Fighting the fight the way he does, is I assure you, emotionally charged and draining. This was an extremely hostile room of radical thought. He deserves both our appreciation and gratitude.

During the evening, logic, truth and fairness aside, the glaring omission was the presentation of an example of what was unacceptable. What would constitute a remark about Israel that would indicate Jewish hatred? There was acceptance in theory such a creature existed. Arthur Goodman had showed promise when he inferred lying about Israel is a signal you have crossed the line, but then said if the lie was made in good faith, in ignorance or out of anger, then it didn’t count. As race hatred is born in ignorance, logic dictates, that Arthur does not believe any form of racism exists. Nor indeed that any statement, however vile, ever becomes worth censuring. As long *as you believe it is true*, it is okay.

So is there such a comment? An example, any example of a statement about Zionists that would clearly be called antisemitic? After the talk I personally approached two of the panellists, John Rose and Lindsey German. Could such a comment exist? ‘Yes of course’ they both replied. ‘Can you give me an example of just one’. Silence. Mumbling. More silence. Eventual deflection. That silence, that inability to answer the question, shows you everything you need to know about the evening.

This is Corbyn’s critical power base. Stop the War coalition, rabid socialists, staunch trade unionists, activists, communists, anarchists.  I doubt there were more than a handful who haven’t committed sins larger than those others have been suspended for. I also imagine many are card carrying labour supporters. Antisemitism isn’t something they do or say. It is in their world vision. Their enemy is the cabal, and for many, that cabal is predominately Jewish. Rothschild, the Judaized Illuminati. These people are the root of Corbyn’s Labour. His tree cannot grow, his vision cannot prosper, without them

This isn’t the gene based antisemitism of Hitler. It is a version of the classic antisemitism of the past. You can convert and save yourself. Jew is money, Jew is control, Jew is the insidious enemy. If you leave the cult of ‘Jewish money’ and accept their way, if you condemn the settler state, if you reject ‘Jewish capitalism’, if you understand that Jew is white oppressor not minority victim, if you ’de-Jew’ yourself and become simply a universalist, then you may still be saved. For those who exist in the far left, those who believe that antisemitism is shaped like a swastika and the political spectrum is linear rather than a horseshoe, it cannot possibly exist where they stand. So however large it becomes, however dangerous a threat it poses, they will never, can never, see it.

I cannot see this mixture of the deluded and the hatemongers ever taking power. But if they do, if the rabble I was with last night actually put their man in number 10, then I tell you this – there will be no place at all for Jews in the UK. We don’t need to pack our bags yet, but we need to appreciate there is a very dangerous enemy in town.

7 thoughts on “Antisemitism at the root of the Labour Party”