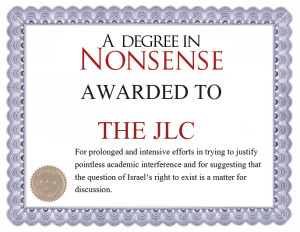 I was present at the conference at Exeter and have just read your piece in the Jewish Chronicle, in fact a cross post at the JLC website had ‘urged me to do so’. The piece is also reproduced on the Times of Israel website. I had been one of those critical of the initial agreement and had provided my account of my experience at the conference. Those reading both your and my original contributions have questioned whether we were even at the same event.

This letter is in no way a personal attack. As you are both an academic and a supporter of Israel, I consider you to be on the side of truth and there is no personal insult intended in my deep and obvious opposition to a specific political manoeuvre by the JLC that I believe was driven by their own self-interest.

I am not naturally confrontational nor an extremist and having read the first three paragraphs of your article, we have fundamental agreement over the narrative. The important element in this discussion is that regarding the conflict, what Israel did was not with intent, pre-planned or of their choosing. The Zionists, and then Israel, reacted to events as they unfolded.

Additionally, my opposition isn’t to your actual presence at the Exeter conference. In fact, as I was also there, it would be an absurd position for me to take. What I have taken objection to is the manner and nature of the agreement itself, the stated goals of the agreement and more recently, this concerted effort to sell the false results of a bad idea to an already sceptical audience.

Personally, I do not even believe this selling of dubious goods is completely intentional. Although I imagine the driving force is political self-righteousness and self-justification on the part of the JLC, I simply suggest that there a fundamental misunderstanding of what is happening on campus. So removed from reality are the leaders of the JLC, they think imposing two Zionist academics into an anti-Zionist festival led by Ilan Pappe, could provide positive or worthwhile output.

A simple question. Do you think Ilan Pappe doesn’t know the Zionist narrative?

As for the description of the conference itself. Your recent article is far superior to the messages relayed by yourself and Alan Johnson following Exeter, probably because now everyone is aware other Zionists were at the event (there were 4 in total) and a radically different story emerged. I see too that the idea that you were actually ‘speaking’ rather than just sitting amongst the delegates asking a few questions has been completely discarded and the tone itself has changed from Alan’s triumphalism to a more realistic ‘we tried’. I am pleased to see some backtracking since the original statements. It was a sorry attempt at politically motivated distortion.

But this leads to the issues with the agreement itself. You argue that the Zionist narrative has to be heard, you argue it was right to be there, you argue that your questions were academically valid. And this is all fair enough. You sat, as I sat, amongst delegates, asking questions into a microphone that circled the audience. However, you could have gone, asked questions and received *exactly* the same output without doing anything more than registering for the event without the JLC involvement. The political involvement was completely unnecessary.

Therefore, the first thing that comes out of your description of events is that the agreement itself gained nothing from within the conference at all, leaving the JLC needing to explain just what the wider Zionist community gained by this movement doing a deal with the devil.

Secondly, the JLC agreement adamantly stated that the principles of academic freedom are fundamental. Putting aside the ridiculous notion that any freedom can be absolute, how can the JLC speak of academic freedom when they imposed both you and Alan Johnson on the conference?

Thirdly, part of the agreement was for a proper academic conference later in the year. It is now October. 8 weeks until 2016; there has been no call for papers, no conference date has been set, no nothing in fact. This on top of the glaring absurdity that a political body is imposing conditions on an academic institution in the name of academic freedom.

In short it is difficult to maintain that there should be no criticism of the agreement if:
1. They speak of academic freedom whilst imposing conditions on an academic conference
2. The second conference is a political move rather than an academic one, that in any event, already seems farcical in its organisation
3. You could have gone to the conference anyway as an independent.

As for your general narrative on the exchange, let me say this. I spend my time, not promoting Zionism from within, but arguing against the hard-core haters outside. Given the volumes of papers on the subject, I rarely read pro-Zionist papers, pro-Zionist blogs or engage in pro-Zionist discussion. For the last 15 years, I have spent my time reading other narratives. You are far more likely to catch me with Mondoweiss, Electronic Intifada or Pappe than you are with Elder or the Jerusalem Post.

My experience is in differentiating between the anti-Israeli narratives and then arguing Israel’s case through identifying the nuances that divide the opposition argument. A left wing radical from Newcastle, a rabid anti-Semite from Glasgow, a Holocaust denier from Brighton, an Israeli born ‘self-hater’ and a 3rd Generation British Palestinian from Exeter may appear blissfully united in their hatred of Israel, but in reality, they are not even speaking the same language.

I do agree with you, there is every reason to confront the Palestinian narrative, present our case academically and for us not to cede the ground prematurely; I also believe this may sometimes bear fruit, just not in Exeter and not in the manner in which it was done.

Your presence in Exeter was not unlike Darwinists appearing at a radical creationist convention. These people are religionists, adhering to a paradigm not through logic, but through the imperative of an underlying greater force (in their case hatred). From where you were sitting it may have seemed that you were making your points with clarity, but from where I was, I could hear the static ringing in the delegates ears.

In confronting these people with the Zionist narrative, you engage the argument that Israel has no right to exist. It lowers the bar of the Zionist discussion and creates an environment that reinforces the extreme anti-Zionist message. It also creates the image that radical Palestinian elements are the ‘mid ground’ or ‘moderates’ between Zionists and the Exeter crowd.

So another simple question. If Israel’s right to exist is not up for discussion and beyond question. Why did the JLC send you there to discuss it and pay attention to the question as if it were valid?

I was in the same conference, and despite both your and Alan Johnson’s protestations, I know there was no one there to listen to your message. It concerns me greatly that the JLC do not know enough about what is happening on campus to believe that you would have been anything more than unwanted intruders in the room. I even felt sorry for you when you were there.

You simply cannot attack the anti-Zionist paradigm through use of the Zionist narrative, it makes no sense to them at all and it is like shouting at someone in a language they do not understand. The weakness of their narrative is in the absurdity, hypocrisy and double standards of its central tenets. Suggesting that it was the Arabs fault the violence started or that Zionism was a Jewish national right, simply does not compute with them. It is only questions that attack the issues within their own paradigm that strike at the foundation of their argument.

1. If Europe places its refugees into camps, creates an apartheid system around them and lets them stagnate for 60 years, refusing to absorb them at all, at what point do we stop blaming Syria for their suffering?
2. How is a 3rd or 4th generation European or American whose ancestors came from within the Palestine Mandate, not acting like the Zionist he or she despises? At what point does the inherited right to return not pass to the children?
3. If residents in a Palestinian village were justified in using violence against the Jewish immigrants, isn’t that promoting the ideas of extremists in the National Front, that violence is permissible against today’s immigrants into Britain.

The JLC interference (not your presence) was a waste of time. It was a publicity stunt designed only to increase their own positioning and nothing that was achieved couldn’t have been achieved without their interference (at a far lesser cost). With all of what is occurring currently on campus, for whatever reason, the JLC decides one of the most important things it has to do is confront Pappe in his own backyard. How foolish. Of the several conferences currently scheduled or taking place, why are the JLC not sending academics everywhere? Or is the media coverage or lack thereof the deciding factor in their decision making.

Finally, to highlight the naivety of the entire episode, I refer you to what was listed as  one of the major ‘hopes’ from the JLC agreement. That it might in some way influence the anti-Zionist opposition to Israeli academics and their institutions. That is pure poppycock. Do they know what the BDS movement is about at all, do they not understand the blind hatred and absolute rejectionism that drives it?

Your article was titled quite simply: ‘two narratives’ referring directly to a specific question you raised at the conference:

“Can we agree on ‘two narratives for two peoples’?”

We were both there, we both heard the answer:

We have every right to go where we want and argue with who we want. No political body has the right to interfere and in doing so promote the standing of some of the worst anti-Zionist hate driven rhetoric on campus. There is no middle ground and no room for discussion with Pappe’s disciples. Israel does not have only half a right to exist.

2 thoughts on “An open letter to Professor Gabriel Brahm”