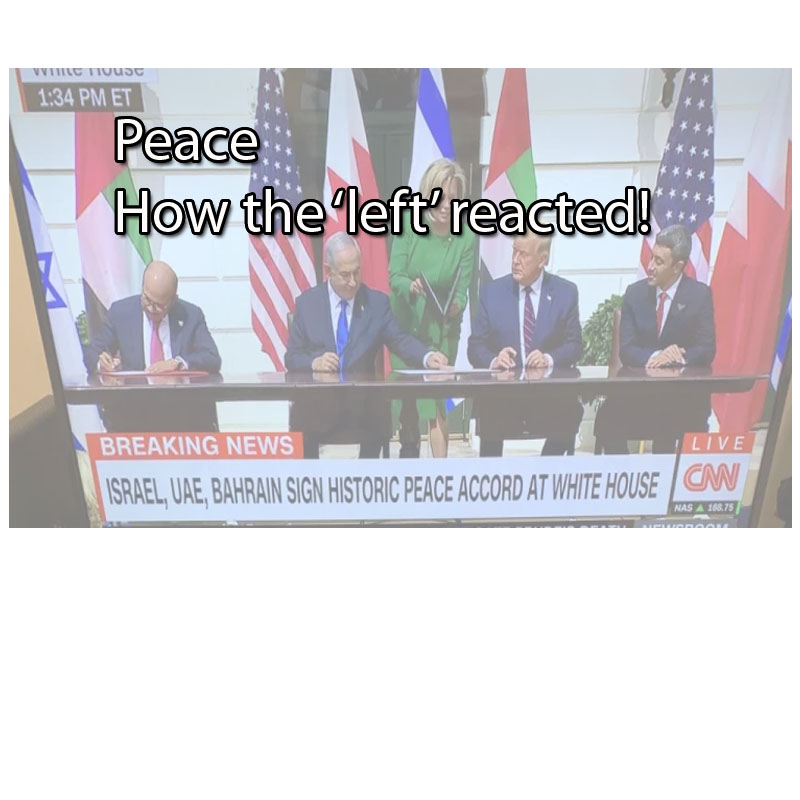 The last Arab state to make peace with Israel was Jordan, in 1994. Egypt was the first, in 1979. 15 September 2020 was a historic day. At the White House, Donald Trump, Bibi Netanyahu, Sheikh Abdullah bin Zayed Al Nahyan and Abdullatif Al Zayani signed agreements between Israel, the UAE and Bahrain.

Yesterday’s momentous event could only take place with the blessing of Saudi Arabia. In December 1945, the Arab states began a boycott of the Jewish Yishuv. On 15 September 2020, the Arab boycott was firmly buried. These days Amnesty International, terrorist groups and extremists in the west are the only ones pushing the Arab boycott. It is deader than the Monty Python’s parrot.

Last night the walls of Israel’s capital city Jerusalem were showing the flags of the United States, Israel, the UAE and Bahrain. A historic and moving sight.

With another five or more Arab states apparently queing up to sign treaties with Israel, the term ‘new Middle East’ finally has some meaning. What right minded person wouldn’t be celebrating?

Of course in today’s world, where Donald Trump and Bibi Netanyahu are both potrayed as demons in a failing media, there were many on the left side of the political spectrum who found clever ways to avoid joining the party. Here are a few choice ones:

The largest group simply ignored the event completely. Take Jeremy Corbyn, who never misses an opportunity to comment on Israel when he can demonise it. Corbyn simply went offline for a few hours. So did Yachad, that wierd fringe Jewish group that believes Narnia exists. What possible reason could ‘the pro-peace movement for British Jews’, have for tweeting on a day that two Arab states made peace with the Jewish state?

Both their Twitter account and Facebook page went dormant. Perhaps they were just following that old saying – ‘if you have nothing nice to say, it is best to say nothing at all’.

The ‘they werent at war’ method 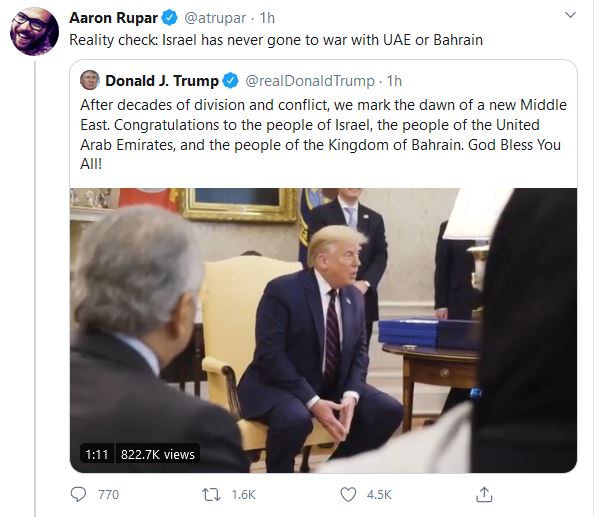 This attempts to say that because UAE / Bahraini soldiers are not facing Israeli soldiers on a battlefield, then it doesn’t count. Many leftist cranks pushed this line.

When Israel made ‘peace’ with Jordan I can recall no such opposition, but by the 1990s Israel and Jordan had been cooperating closely for decades. That’s what often happens, conflict thaws over time until eventually – peace arrives.

In any event, this entirely misreads the history and geo-politics of the region. The Gulf region has been the financial heart of the entire conflict. The centre of the Arab boycott and the source of real political clout against the west. The 1970s oil crisis anyone? On 15 September the Arab boycott was totally buried. No cause for celebration?

When peace comes to a war-stricken region, people rejoice. Unless it is Israel.

A Sky News interviewer even tried this method live on air with veteran Israeli politician Tzachi Hanegbi.  Mark Austin asked Hanegbi “so you are happy to sign deals with Saudi, Bahrain despite the human rights issues?” to which Hanegbi replied “They are the same deals that your country signed aren’t they Mark?” 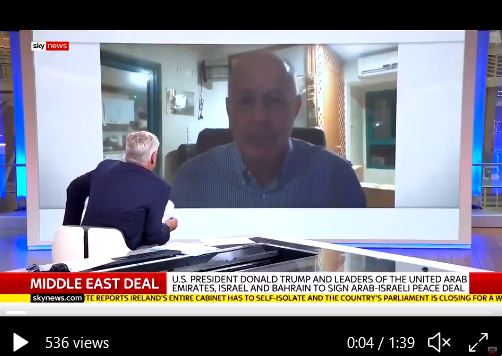 Suggesting Israel alone, from all the world’s nations should not sign a deal with the Gulf States is ludicrous in the extreme. If every nation in the world has a diplomatic relationship with the UAE, why does it only bother them when Israel reaches out?

This is just a group of people, annoyed that Trump is involved and who are trying to pour poison into the party punch. Pure, simple, spite.

The ‘it is an arms deal’ argument

This suggests the only reason this deal is being done is because each of the players stands to get improved weaponry, which the US will also benefit from by selling to them.

This is the argument of a leftist with the emotional maturity of a 10-year-old and the geo-political understanding of a dead goldfish. Perish the thought that these nations are making peace because they have similar concerns, face mutual threats or want to benefit.

Aren’t all political relationships built on pillars of mutual benefit? In any event – why now? Didn’t Obama supply all these players with weaponry? Why didn’t they dance for him?

What is a terrorist to do when peace moves occur in the Middle East? Turn violent of course. When Israel embarked on the Oslo Peace process in the 1990s, Palestinian terrorists responded by slaughtering Israelis. Buses, cafes and malls became targets for suicide attacks. So perhaps it was no surprise that just as the ceremony was taking place in the White House, terrorists in Gaza fired rockets at Israeli civilians.

It is worth remembering that those terrorists firing rockets from Gaza as Israel makes peace – don’t want to be blindly firing rockets. They would much rather be blowing up Israeli buses, pubs & clubs just like they used to. The only reason they can’t? Israel stopped them getting in.

This is CNN’s front page last night, just hours after the historic deal: 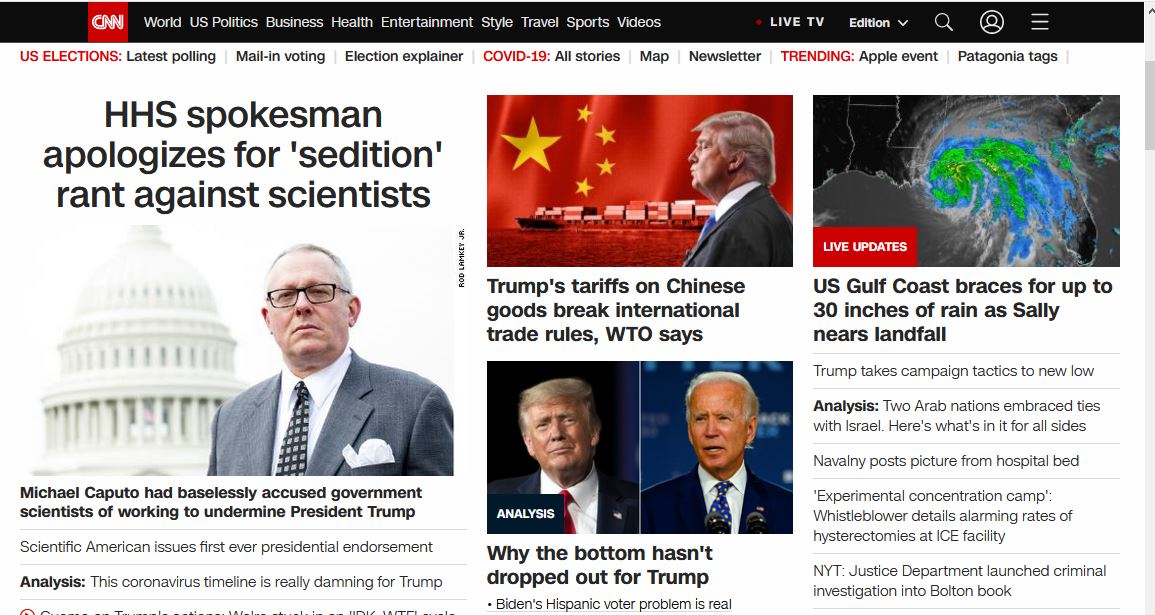 On 14th September 2020 only two Arab states had signed treaties with Israel. By the time this page went live there were four. And like him or not, the President of the United States was central to the event. There are four featured stories on this CNN front page, one is aobut the weather, the other three are clearly anti-Trump. The peace deals don’t appear as news anywhere. The one mention is a comment piece- an analysis – which permits CNN to deploy a critical piece, rather than a news piece. Even then it is hidden away as a ‘lesser item’ on the page.

The BBC had a Trump item on their front page – but it was to ridicule him, rather than talk about the peace deals. 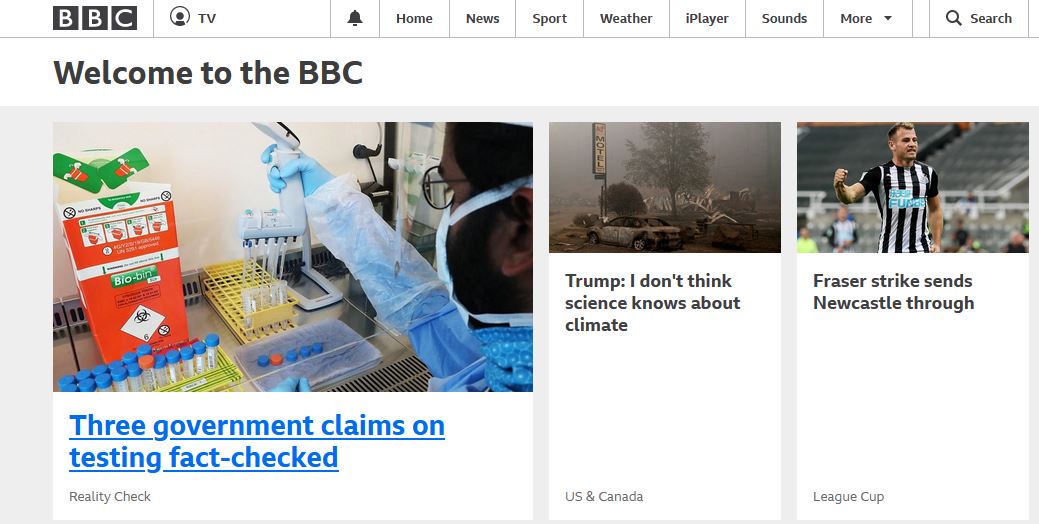 This is the way the leftist crank media dealt with it. They just hid it away.

The ‘it’s an election stunt’ gambit

This is the argument that this only happened because the election is two months away:

Oddly no president before Trump has ever thought of doing it. Calling Bahrain and the UAE over a couple of months before an election to help them win. It is clearly hogwash.

In Israel the same argument translates as ‘Bibi is only doing it to deflect from the corruption trials’. Which means that all the Prime Ministers of Israel prior to Bibi could have made peace with the UAE and Bahrain, but chose not to because they weren’t facing corruption trials.

The ‘it is because of Rabin and Oslo’ method

This method rewrites history by taking away all the credit from those involved. Take Tal Ofer. He has found it almost impossible to say a single positive thing on Twitter about the event. When he did mention it, he first used the ‘political stunt’ method by implying it was more about Trump’s election campaign or Netanyahu’s pending trial. When pressed to praise the event he finally broke:

So Ofer finally ‘welcomes’ the peace with the UAE and Bahrain, but gives the credit to Rabin and Peres. He also deploys the ‘not at war’ method too. I am not sure how old Ofer is, but this is just historically wrong. Rabin’s tenure as peacemaker lasted just 3 years and he existed in a particular Middle Eastern paradigm. The world we have now, the one that has allowed for Israel’s ties to blossom with Gulf States simply didn’t exist then. The fall of Iraq, Arab spring and the emergence of Iran’s nuclear threat were gamechangers.

Tal is so desperate to avoid giving credit where it is due – he resurrects the masters of the early 1990s Oslo catastrophe. Even if we stretch to suggest early Saudi ties actually created the possibility – they began in earnest in the late 1980s – with Yitzchak Shamir – another Likud Prime Minister.

This one is simple. Everything that happens is just an expression of Jewish control and power. Antisemites don’t see this as anything more than Jewish people using their influence to get more money and power as part of the plot to create ‘Greater Israel’: 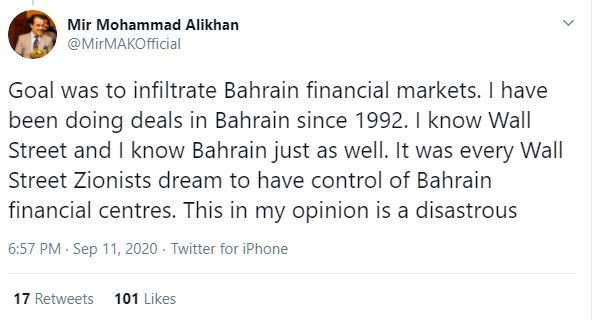 The ‘who cares’ method

There is no attempt here to deny the peace deals with the UAE and Bahrain are important. The Daily Edge simply points out that Donald Trump has better things to do than obsess about Israel.

The ‘let’s attack those celebrating’ method

This method didn’t actually directly engage the ceremony itself but rather chose to attack the Jewish people who celebrated it. Take the tweet by David Rosenberg, that was retweeted by Joseph Finlay of the fruitcake group Jewdas. It was in response to the Tweet by the Board of Deputies that celebrated the ‘historic moment’:

This is part of the paradigm that Jews cannot ever do anything right or be happy. There is always a moaning uncle around the Passover table bringing everyone else down. We must always be miserable and find fault, because nothing can ever be perfect. And we must remain weak and helpless – which is perhaps why these people generally oppose Zionism.

Remember that Finlay turned up to say Kaddish for Hamas terrorists. As for David Rosenberg, the only mention of international human rights on his Twitter feed is when he attacks Israel. But hey, let us never suggest the crank left are raging hypocrites.

No, this is not another method to spoil the party, this is my assessment of those that do. The peace deal yesterday was not Trump’s or Netanyahu’s, it was ours. The people of Israel, the UAE and Bahrain along with all those globally who support peace.

And we will take this peace and hand it to our children and grandchildren. Maybe my daughter, who serves in the Israeli army, will have children who will grow into a world that don’t have to.

If this was Clinton and Rabin, the media would still be rolling the cameras. They’ve forgotten what it means to report news.

If you cannot see beyond Trump and Netanyahu when you look at these events, your obsessive hatred has blinded you completely, rendered you incapable of proper judgement and broken your moral compass. The reaction by some on the left to these deals just prove how lost they have truly become.