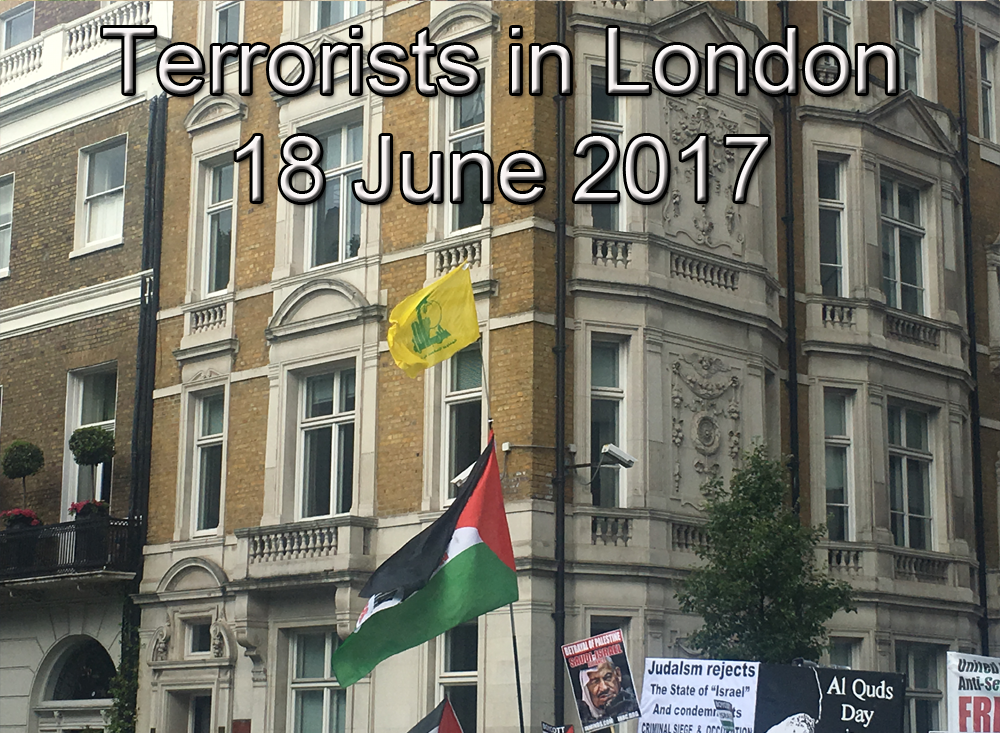 Marching with (and stopping!) terrorist supporters in London in 2017 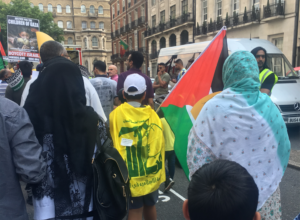 It is 3pm on June 18th 2017.  I am in disguise, wearing a keffiyeh that is necessary to cover my face. I want to infiltrate the Al Quds Day march and the only way I can participate is to remain unrecognised.  I stand next to the terrorist flag of Hezbollah. The stewards are on the lookout for people like me, and although I am quickly questioned, their suspicions do not allow them to remove the keffiyeh. They could not know who was behind the mask. I stare them down. I remain unidentified and I am in.

Fifteen days ago, just three miles from where I stand, eight people were killed and 48 were injured in a radical Islamic terror attack. In Manchester just a few weeks before, an Islamic terrorist attacked an Ariana Grande concert, deliberately targeting British children. Twenty-two people died in that attack. A few weeks before this, five were killed when an Islamic terrorist attacked people in Westminster. That attack was less than two miles from where I stand. Today, I will walk down Oxford Street with hundreds of people, all marching in support of a radical Islamic terror group. Proudly waving the flag of the Hezbollah. Welcome to the Twilight Zone.

Al Quds day is an Islamic invention, that was introduced into the calendar by the Islamic Republic of Iran in 1979 in ‘opposition to the existence of Israel’. The London branch of the Islamic hate festival is organised by the Islamic Human Rights Commission (IHRC). Every year flags in support of Hezbollah are flown. This year the IHRC have even encouraged people to bring them.

“an anti-Semitic, sectarian shia-jihadist terror organisation that advocates the annihilation of Jews worldwide, and has militarily backed Assad’s atrocities in Syria for geo-sectarian reasons at the behest of their state sponsor Iran.”

The meeting point was Duchess St in London. I was at the event last year, and this year the numbers were clearly down. Maybe 250 people this time, including several young children kitted out in Hezbollah colours. The organisers were visibly disappointed as they continually advised the marchers to ‘spread out’. They were constantly urging more of a response to their call for chants. They knew the attendance looked and sounded weak.

Nazim Ali on the megaphone spewed out hate. Here the organisers did not disappoint; a rancid, antisemitic tirade that suggested the ‘Zionists’ (read Jews) are the root of all evil. All manner of antisemitic conspiracy was shouted out through the speakers. The BBC are silenced through the power of Zionists, the Board of Deputies have blood on their hands, Israel is ISIS. The crowd is told Zionism to its core is a ‘fascist, evil ideology’. By a country mile the most despicable attack was linking the ‘Zionists’ (read Jews) to the recent tragedy in Grenfell. An entire tower block reduced to ashes, and clearly the fault of the Jews. The police did nothing. When asked about some of the hate being spewed: ‘It’s an opinion’ one said.

The constant use of the ‘good Jew’, ‘bad Jew’ formula, somehow permits these antisemites to spew sectarian anti-Jewish hatred on the streets of the UK’s capital. A handful of Neturei Karta stand at the front of the march. A strange cult on the very fringe of Jewish society allowing mainstream Jewry to be attacked without comment. Some of the comments are caught in this video:

I had known it was coming, but suddenly there was agitation at the front. The march came to a stop. It was time for me to make my way outside.

‘Thou shall not pass’

I quickly left those waving the terrorist flag to join the group of protestors who had brought the march to a halt. About 40 pro-Israeli activists, had taken up position in front of the demonstration. 40 activists, waving the Israeli flag, shouting “get the terrorists off our streets”. They were not moving and the entire procession came to a stop. Richard Millett, one of these protestors, took this video, shortly after they took their initial positions:

The failure of law

The police were clearly unsure what to do, as the pro-Israelis pointed to the Hezbollah flag, asking for the flag to be removed. Carefully reciting from a script sheet, over and over again the police stated that the flag represents the ‘political arm’ of Hezbollah. It is what the rule book says. This is toothless western bureaucracy, and highlights just how lost the west is in response to radical Islamic terrorism. It sends a message that it is okay to hate Jews, it is okay to incite against them, it is okay to ask for them to be ‘wiped off the map’. It is also okay to create a specific military wing to violently carry out your wishes. As long as you do not join that military wing, you can be treated as a legitimate actor. This the logic behind the argument.

Islam is a political religion, there is no separation as we understand it. If we in the UK would object to the waving of an ISIS flag because it is symbolic of the slaughter of innocents, so too we should oppose Hezbollah.

Yet the pro-Israelis succeeded where the politicians had refused to tread. As the police eventually began to slowly move them on, they changed the face of the entire demonstration. Walking at the front were 40 Israeli flags, pointing back to the Islamic march, shouting that terrorists should not be allowed on our streets. As they were at the front, it was the first thing that everyone saw, and a forceful image that shaped the way the demonstration was being viewed. Strategically it was very successful. These activists stood in the sweltering heat, peacefully faced down the terrorist crowd, with resolve, with courage and they blunted the antisemitic message of hate. Kudos. 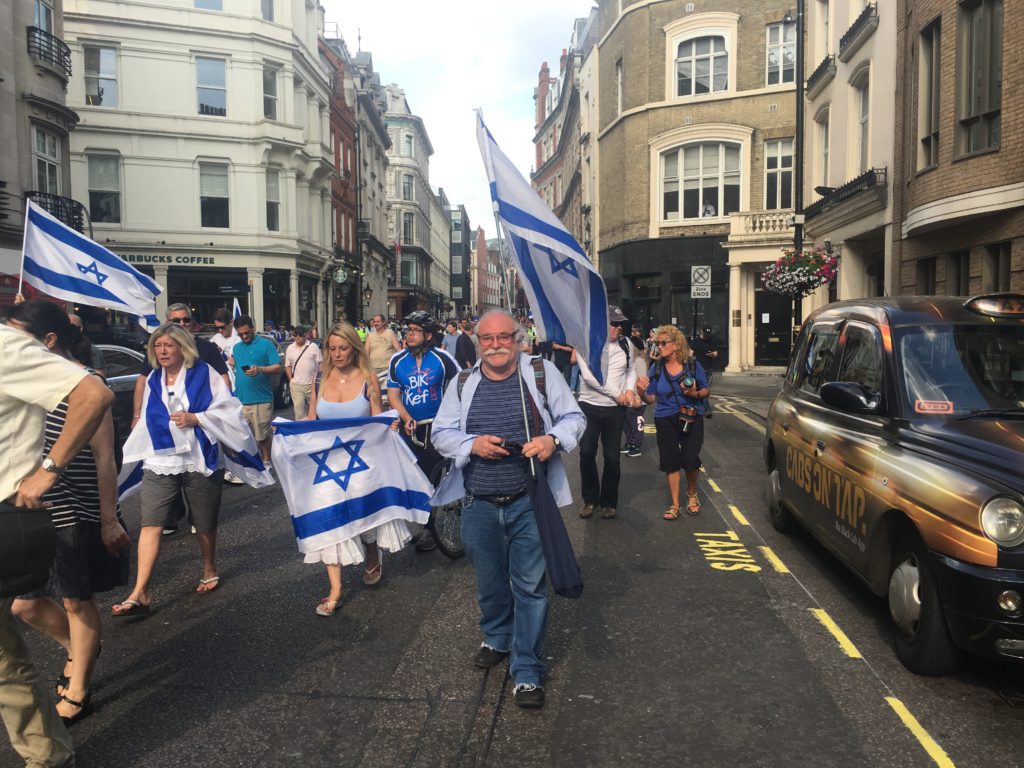 And so the two groups finally faced each other. Speaking on the one side, Kay Wilson, a survivor of a brutal terror attack in Jerusalem, and speaking on the other, those that wave the flag of Hezbollah.  Scottish PSC were represented, driven by a hate that blinds them to the colours of the Hezbollah flag. So too Naomi Winborne Idrissi. There is no excuse for a self stated ‘humanitarian’ of any shade to be walking with such toxic antisemitic elements. Rarely have Idrissi’s internal failings been so clearly exposed. On the 18th June 2017, she stood with the flag of Hezbollah. Under the banner of radical Islamic terrorism.

But the real failing here is that the march was allowed to take place at all. It is a disgraceful message to send that we are so impotent in the fight against terrorism, that terrorists can wave their flags freely in London.

The 18th June was Fathers day in the UK. Seeing the Hezbollah flag waved in London was a direct insult to all the absent fathers that were ripped from their families through Islamic terrorism. How sickening, that on a day that would know mourning in hundreds of households in the UK, Hezbollah should be honoured in the UK capital. The politicians had left it so the victims of terror were not remembered on the streets of London, their killers were. How fortunate that some people took to the streets to remind everyone of the truth.

I fight antisemitism in the UK. I am currently working on some long-term projects. My usual activity into antisemitism involves attending hate events, frequently undercover. I also fight the revisionist narrative and am engaged in historical research. The generous donations I receive from the community allow me to carry on with this work.

35 thoughts on “Marching with (and stopping!) terrorist supporters in London in 2017”