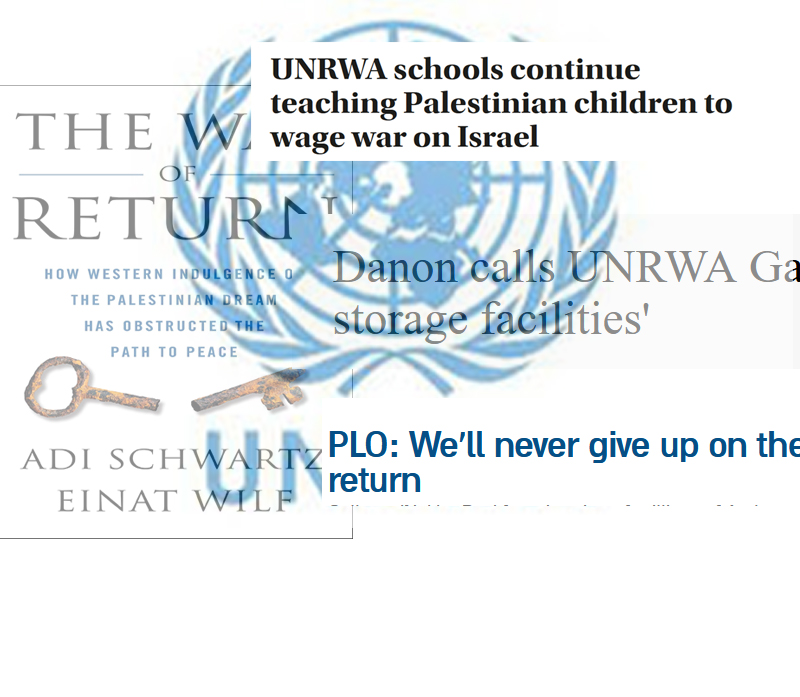 Palestinian refugees and UNRWA – it is time to tell the truth

In May 2016 I spoke at a panel event on the possibility of a two state solution. My talk focused on the key issue of the entire conflict – the reason the ‘Palestinian refugee’ situation can never end. At the time I called for the ridiculous definition of a Palestinian refugee to be thrown into the dustbin of history and for UNRWA to be scrapped alongside it. A newly published book by Adi Shwartz and Einat Wilf called ‘the War of Return‘ lays out the case far better than I ever did. This piece isn’t a review of the book as much as support for the truth that is written inside. I rarely agree with a book as much as I did with the ‘War of Return‘. If you want to see all the evidence that supports these arguments, I really suggest reading it.

The truth is not right wing

Adi Schwartz used to work for Ha’aretz. Einat Wilf was a member of parliament for the Labour Party. The two authors were both long time members of the Israeli left. For many, what occurred between 1993 and 2008 would fundamentally challenge long-held beliefs. Between the Labour Party’s victory in the 1992 election and its 2009 electoral disaster – the entire peace camp of Israel collapsed. Israelis experienced first-hand something that could not be denied – the paradigm of the Oslo peace process was built on falsehoods.

Israelis were forced through this awakening, as the fake doves of Oslo turned into the bombs of the second intifada. Far removed from the blood flowing down Israeli streets, western politicians – and even large community organisations in the Jewish diaspora – still hold on to the Oslo process. It creates a divide that makes it seem as if Israel has shifted to the right. It has not – it has just stopped believing the lies.

The truth of this conflict is, and has always been, about a denial of Israel’s right to exist. Before 1967, that was an obvious statement to make. Since 1967, a false narrative spread, suggesting that the Palestinians (as a body, not as individuals) are willing to make peace with the Jewish state.

The Right of Return is a call for the end of Jewish self-determination, the destruction of Israel, and the Palestinians openly say that they will *never* give it up. Everything people in the west, including Jews in the diaspora, choose to hear beyond that message is delusional. Adherence to the idea of a negotiated settlement becomes an act of faith built without any supporting evidence.

The Palestinians chose to walk away from several serious opportunities to make peace because they couldn’t sign a peace deal. The problem wasn’t about land, nor was it about settlements – it was because the Arabs created and nurtured a national identity inside the refugee camps that was built with a singular purpose -to facilitate the destruction of the State of Israel. This identity now holds everybody hostage – including the Palestinians in places such as Ramallah.

The War of Return

The War of Return goes into well documented, forensic historic detail, showing how the Palestinian refugees became a weapon, pawns used by Arab states intent on Israel’s destruction. How they were politically shaped and ideologically radicalised. Some taken as children and turned into terrorists. At the heart of this process was a United Nations agency – funded by western democracies – UNRWA. The camps of the United Nations Relief and Works Agency have almost certainly been responsible for the production of more terrorists, than any Al Qaeda base. Hate, radicalisation, and terrorism rubber stamped and funded by delusionists and cowards in the west.

The book works its way through the early history, how the refugee issue was created and then sustained. Some of the examples brought to light in its pages are simply jaw-dropping. Even for someone like myself who spends his time in archive material, the book was eye-opening.

Through a combination of ill-fated historical coincidence at the start of the Cold War, political cowardice and a thirst for oil, western powers caved in and helped to create a humanitarian crisis that would perpetually abuse everyone concerned. Anyone who really wants to understand WHY this conflict is still ongoing, needs to get hold of this book. The Palestinian identity as we know it in the west, is not a product of the children in Ramallah. Most of them just get on with their lives. The identity was forged inside the camps – as a weapon – and this book explains exactly how it happened.

UNRWA has to go

UNRWA, and much of the apparatus of the UN these days exist inside a paradigm of apology. The end goal is a setting back of the clocks to before the 1947 partition plan. It is no coincidence that the annual UN ‘day of solidarity’ with the Palestinian people is on the 29th November, the day of the vote on partition. Why on that day, because they the UN are sorry it happened. Despite western pressure everything the UN does still treats ‘Zionism as racism’. This message is carried throughout the Palestinian movements and NGOs. The right of return is part of the way the ‘clocks’ get reset, the Jewish state is undone and Palestine – from the river to the sea – becomes ‘free’.

UNRWA, rather than working to help or assist in refugee resettlement, became a pillar in the Palestinian resistance – schools funded by the west, teaching children why they should join the armed struggle against the Jews. UNRWA must be dismantled as part of a comprehensive reworking of the possible ending of this conflict.

The Palestinians themselves are caught in an eternal prison predicated on a non-existent right that must be unravelled. A force created solely for the purpose of destroying Israel against a state of Israel that will not be destroyed. Perpetual statelessness forced on people who should have been given a new home 70 years ago. An identity that is today more virtual than real holding back Palestinians in Ramallah and Jericho from having the freedom of being able to make peace with their neighbours.

The farce of the UNRWA refugee

Look at Jordan. Over one third of Palestinian ‘refugees’ live in Jordan. They have lived there all their lives. They have Jordanian citizenship, they vote in elections and travel freely. The vast majority do not live in camps, with many joining the professional ranks of Jordan’s middle class. These are refugees? It is an insult to the millions of real refugees, survivors from war-torn regions, that exist in the world today. Worse still, it is THESE Palestinian refugees, that receive more aid and recognition than any of the others in the world. Ending this farce is a humanitarian objective that everyone on the left should support. Why should those Jordanians, with their Jordanian passports hold back the Palestinians in Bethlehem?

The Palestinian refugee in 2020 simply should not exist. To highlight the absurdity we can use another example:

UNRWA perpetuates this abuse. UNRWA has to go.

Removing the refugees and UNRWA from the equation

Incredibly, so fully has the ‘peace process’ become embedded into the western mindset this underlying truth – the calling out of the Palestinian refugee as a perpetuated myth forged as a weapon – receives pushback even amongst some Zionists. Yet there will be no solving this conflict until this farce is removed from the Middle East.

The evidence is everywhere. It is why they are not building homes in Gaza or Ramallah. Why those living in PA areas are also called refugees. It is all nonsensical UNLESS you see this for what it is. The Palestinian refugee was born into a paradigm of no to normalisation – and they cannot exist outside of it. If we are to move forward and find any accommodation between the Jews of Jerusalem and the Arabs of Ramallah, we have to end these lies.