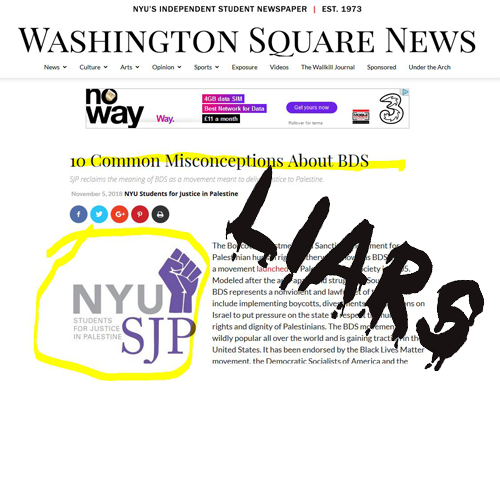 NYU, SJP and a response to ‘the 10 Common Misconceptions About BDS’

NYU and the ‘ten common misconceptions about BDS’

‘Washington Square News‘, is an  ‘Independent Student Newspaper’ at NYU. Three days ago they published an article written by SJP ‘Students for Justice in Palestine’. It was titled ‘10 Common Misconceptions About BDS‘ and set out to reassure the reader that the boycott movement against Israel (BDS) is a legitimate, credible, successful and ethical tool with which to bring peace to Israel and the Palestinians. I thought I’d take a look:

This is an easy one. BDS is clearly antisemitic. SJP argue that ‘BDS targets the nation-state of Israel, not any religious or ethnic group’, which is half-true, but they fail to address the lies and hypocrisy inherent in the movement.  In their argument they bring up historical Jewish anti-Zionism in the shape of the Labour Bund. The logic is this – if some Jewish people were against the formation of Israel in the 1900-1940’s, it is okay to oppose Zionism today. That’s pretty twisted. The Bundists opposed Zionism because they believed Europe could provide safe haven in the shape of Jewish autonomous regions. They were wrong and Bundism burnt in the fires of Auschwitz. SJP are cynically using Holocaust victims to shield criticism of an attack against Jews.

Yet the real issue with BDS is in its selectivity. Notice how BDS ‘target’ Israel. Why not Lebanon? Inside Lebanon are descendants of the 1948 Israel /Arab conflict, perpetually held under a real Apartheid system. These ‘refugees’ are explicitly referenced by BDS, yet BDS does not target those guilty of oppressing them. Why not? If human rights of Palestinians is key here, then BDS should cross borders, but it doesn’t. This shows that promoting the ‘human rights’ of Palestinians is an excuse. BDS is a movement set up to exclusively target the ‘Jewish state’ for reasons beyond those officially stated. Picking exclusively on Jews sounds pretty antisemitic to me.

2 BDS is too extreme

The SJP article doesn’t even put forward arguments to oppose this statement, it just suggests that such a label can be used against any movement. The extremist label ‘is just a convenient way to shut down all avenues of resistance’. This is merely a deflections that doesn’t address the issue. Of course BDS is too extreme. There is one nation in the whole of that region that provides all of its citizens with a voice, protects its minorities and has a respected judicial system. It has 9 million citizens. BDS seeks to destroy that nation. How is that not ‘too extreme’?

3 The way forward is through dialogue, not boycotts.

‘This is not an issue of communication, but of violent occupation’. Even if true that only explains away 33% of BDS (BDS have three goals, the 1967 ‘occupation’ is only one of them). Unless of course they wish to suggest *ALL* of Israel is ‘occupied’, which they don’t like doing because it exposes the extremism of the movement (see misconception number two). If you read the SJP response, it suggests dialogue is a negative thing. This is the core pillar upon which the case for Israel is silenced. They don’t want people to talk because they know their lies, hypocrisy and inconsistency will be exposed – hence – no to dialogue. What type of justice movement doesn’t give the ‘accused’ an opportunity to defend itself?

SJP claim that ‘BDS is a targeted movement against certain companies that perpetuate violence against Palestinians. We recognize that people should not be blamed for where they are born nor should general citizens be held responsible for actions of the state.’

Remember Gal Gadot and Wonder Woman? BDS activists found a way to ‘legitimise’ the boycott of Gal Gadot. How? She served in the Israeli army. But then, so do all Israelis: 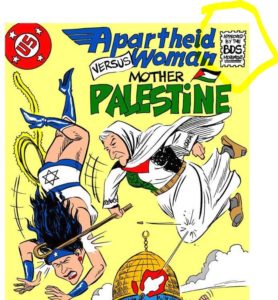 In Scotland an Israeli businessman was chased out of the country. These are just two examples. The boycott of Matisyahu is another. There are countless examples of BDS activists ‘stretching the rules’ to include whichever Israeli is performing, talking or doing business at the time.

Supporting BDS is clearly supporting both Hamas and Hezbollah. The BDS boycott is a rebrand of the original Arab boycott of Jews that dates to long before the State of Israel existed.  SJP try to rely on the call of ‘Palestinian civil society’. Except that pillar is a lie. In South Africa the argument that 85% of the population were calling for boycott was an ethical peg upon which the boycott movement could be built. Except there is no Apartheid in Israel and the two situations are incomparable. Israelis didn’t call for the boycott. If 99% of Israelis don’t want to be boycotted, how can you justify boycotting them? If you argue that Gaza and the West Bank justify this, you are again only referencing 33% of BDS and ignoring the will of the Israeli population. Even the notion of a ‘Palestinian civil society’ is blatant poppycock (something even anti-Zionist Norman Finkelstein saw through). In truth, BDS was created in the West (see Ilan Pappe’s admission.)

6 The BDS campaign singles out Israel, and subjects it to a double standard not applied elsewhere

The SJP argument rehashes the propaganda it has already used in earlier ‘misconceptions’. SJP states that BDS focuses on Israel because the Palestinians asked them to. Which fails to address the inherent questions – why Israel and why only Israel? This BDS argument can be used to reject all racism regardless of how racist it is. ‘Someone asked me to’ when you are hurting a third party, is not a defence.

SJP argues that the boycott movement against South Africa worked (which doesn’t address the question of whether BDS works). SJP then produce one statistic that is four years old to suggest BDS is dramatically impacting the Israeli economy.

If what these people say has merit then why do they consistently need to lie?

There is more. If a boycott is to be successful, the targets perception of the boycott is of major importance. If the Jews in Israel believe BDS to be antisemitic, it does not matter if the person boycotting does not see it that way. And if Israel does think BDS is antisemitic, then which fool thinks Jewish people will ever surrender to antisemitism? In other words, even if BDS did work economically, it would never work in achieving its aims. In fact the opposite is true, all BDS success will make Israelis do is think antisemitism is growing. So they’ll reinforce their defence systems. Whichever way you look at it, BDS doesn’t work.

8 The BDS movement takes jobs away from Palestinian workers

This is a DUH! comment, but one that SJP dispel with myth without addressing the question. SJP talk about the formation of a ‘Palestinian Trade Union Coalition‘ in 2011 (PTUC). An exercise – Google for them. You will soon see that beyond the formation as part of a BDS propaganda stunt in 2011, there is no footprint. Google any other union in the world and spot the difference. These PR exercises are for foolish western consumption only. Then SJP talk about Israel’s ‘exploitation’ of Palestinian workers.  That’s pure propaganda poppycock. I have seen with my own eyes Palestinians who lost their jobs because of BDS. I have spoken to Palestinians who hate BDS and I have spoken to Palestinians who prefer to work for Israelis (better conditions and pay). The BDS movement takes jobs away from Palestinian workers. Fact. By boycotting soft products, you are far more likely to ever hurt a Palestinian family, than you would an Israeli one.

Bit of a straw man this one. This has nothing to do with BDS.

10 As an NYU student, there is nothing I can do about the Israeli occupation

The 10 misconceptions article was actually printed in the hard copy of the Washington Square News on Nov 5. That any print media would choose to reproduce an article totally devoid of argument or logic would be astonishing. Are current university students so gullible? So stupid? There is nothing, not a single argument presented anywhere in the article. It is all smoke and mirrors, wrapped up in a package a twelve-year-old would be ashamed of.

BDS seeks the destruction of Israel. Only Israel. It harms Palestinians, perpetuates the conflict and it only helps the same radical Islamic movements that it shares its goals with. It is a modern day version of a lynch mob, with BDS activists gathered together, wanting to burn the house at the bottom of the hill. ‘Coincidentally’, that house is the only one in the village with the Jewish family inside it. Antisemitic? You decide.

4 thoughts on “NYU, SJP and a response to ‘the 10 Common Misconceptions About BDS’”