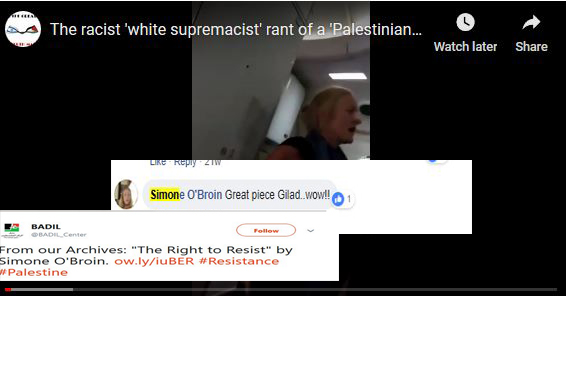 Simone O’Broin: The white supremacy of the Palestinian cause and BDS

Last Saturday, Simone O’Broin, ‘let rip’ with a drunken rant aboard an Air India flight from Mumbai to London Heathrow. She has since been arrested for a racially aggravated public disorder offence. Simone O’Broin (also know as Simone Burns) is a UK trained International Lawyer that has worked for years for anti-Israel groups. This is a video of the foul mouth tirade. Pay less interest to the alcohol driven expletives than the underlying message:

Some of the work Simone did for BADIL is still online. She is listed as ‘Head Researcher’ in the report. Simon O’Broin also aligned with ‘Jews for Justice for Palestinians’, one of the groups that helped create ‘Jewish Voice for Labour’. As a lawyer, Simone O’Broin clearly has an interesting perspective on Law:

But as if often the case with anti-Israel activists, scratching the surface uncovers the racism.

Gilad Atzmon and Jenny Tonge are both on her Facebook friends list (Simone seems to have deactivated her account). In fact, Simone O’Broin often drinks from Gilad Atzmon’s hateful swamp. Atzmon wrote a piece attacking the sentence of Alison Chabloz. Chabloz had claimed the Holocaust was “a bunch of lies” and was given a suspended sentence over the broadcasting of anti-Semitic songs. This is what Simone O’Broin wrote:

That post is not the only one. Simone is often commenting on Atzmon’s pieces and is clearly an admirer:

It might be worth asking the question of whether this business class trip was paid for by an NGO and if so – which one is supporting such racism?

The white supremacy of the Palestinian cause and BDS

The expletives deflect from the important element of the video. Simone O’Broin comes across as a racist, clearly displaying a white supremacy mindset in the words that she hurls at the Air India employees. She mentions her credentials as an ‘International Human rights Lawyer for the Palestinian people about a dozen times. A snippet:

you’re the Captain aren’t you. I am working for all ‘your’ people…. don’t get any money for it by the way….I’m leader of the f..king boycott movement, if I say boycott Air India – done….do I not have the right f..king clothes on? rich Indian ‘f**king money grabbing bastards…I’ll turn you f**king inside out…

This happens far too often to be a coincidence. Racists attached to anti-Israel activism. Many put it down to simple old-school antisemitism, but it is deeper than that. If you listen to activist-academic Ilan Pappe closely, you’ll hear desperation in his voice when he talks about Palestinians not ‘leading the way’. Pappe clearly knows what needs to be done. He looks ‘white’ and is ‘clever’. In the video it seems that Pappe is implying that people like himself in the west created BDS and gave it as a present to the Palestinians because they are not capable of directing themselves. I’ve seen Pappe speak dozens of times, he often appears to treat Palestinians as incompetents who need help.

But the raw racism in the Air India rant leaves little for doubt. Simone O’Broin is a ‘white person’ who gives her time to help ‘non-whites’. Those who are ‘not white’ should be thankful. She clearly expects them to do her bidding. She is ‘white royalty’.

BDS, Palestinianism and anti-Israel activity is loaded with such messaging. A racist movement that views Palestinians as lesser people who have no agency and are incapable of improving their situation without ‘white man’s’ help. The truth is that BDS was designed that way. It was built to feed from antisemitism and the white- supremacist, imperialist nature of the west. Think about it. BDS wants to impose it’s own value system and redraw borders of a far-off landscape against the wishes of the majority of the inhabitants. BDS may as well just call itself Sykes-Picot 2.

All the Palestinians have to do is sit at the table and negotiate with Israel. But some feel this is clearly beyond them. The leaders of the Palestinian cause in the west tell them not to negotiate. They tell them who to talk to, when to talk and what to say. More people wave the Palestinian flag at the Labour Party conference than the Arabs do in Ramallah. How brutally obvious is this?

Antisemitism comes into play because the enemy is the ‘Jewish people’. Those poor Palestinians have no chance against the ‘chosen’ – the untrustworthy, manipulative people who secretly control the world. How can those ‘lesser-people’- possibly do it on their own. In this fashion the Palestinian cause (Palestinianism) has attracted a whole host of antisemites and white-supremacists, all willing to attack Israel in the name of ‘human rights’. Don’t believe me? Just give one of them too much to drink.

97 thoughts on “Simone O’Broin: The white supremacy of the Palestinian cause and BDS”