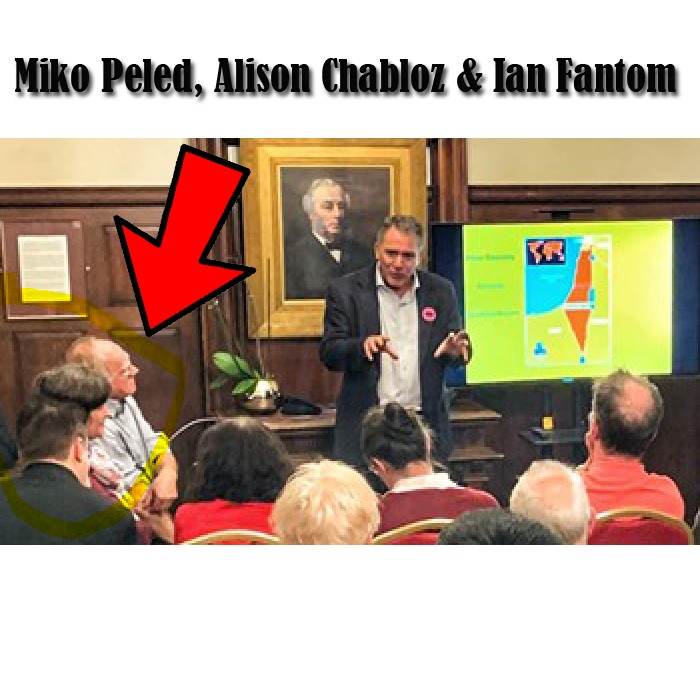 Last Thursday there was a ‘Keep Talking’ event at St Anne’s Church Soho. It was an event organised and attended by some truly nasty antisemites. The event shows how the suggested differences between ‘far-right’ and ‘far-left’ are illusions. There is just a sewer of extremism – those who build conspiracy theories, and all too frequently pin the blame on the ‘Jews’.

We can begin with this image, which shows Miko Peled speaking at the Church. On his right (our left) – set apart from the audience- are Ian Fantom and Alison Chabloz. 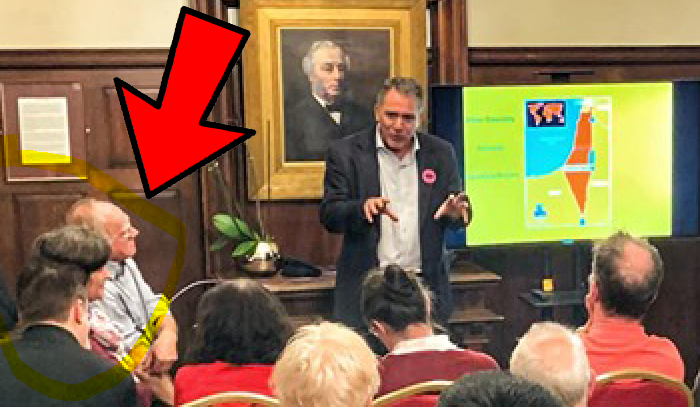 Ian Fantom is a hard-core conspiracy theorist.  He wore this t-shirt, suggesting both 9/11 and 7/7 were staged, to an event he organised in 2016: 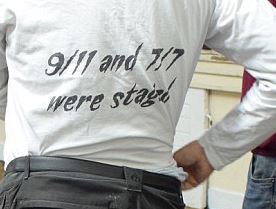 In 2010, Ian Fantom co-founded a group called ‘Keep Talking’ that was set up because other ‘9-11 truth’ groups were ‘sabotaged from within’. Conspiracy theories about conspiracy groups. Fantom explains this himself in an article he wrote for ‘UNZ review’. The website UNZ is described as ‘extreme-right‘ and pushes Holocaust denial. The founder of Unz is known to have contributed funds to a ‘quasi white-nationalist’ group.

At the Peled event, Fantom is sitting next to Alison Chabloz. Chabloz is a convicted Holocaust denier. She was able to attend the event because she was recently released from jail pending an appeal. Chabloz is best known for teasing Jews over the Holocaust through the use of music, creating songs that turn the Holocaust into a fictional joke that she sets to classic Jewish tunes. Other far-right activists were also in attendance. The images suggest that James Thring was present. Thring is a confidante of David Duke and is a regular attendee of the ‘Keep Talking’ events.

The lies of the left

When news broke about the attendance of the far-right at this event, Labour supporters attempted to downplay it. Social media accounts such as the hard-core antisemitic ‘Labour Left Voice’ suggested that these extremists were unnoticed and ‘slipped in’:

The LLV account is run by Sally Eason and is used by Corbyn propaganda outlets such as the Canary to belittle antisemitism. Following that tweet Sally Eason is now on record as both attending a far-right event and lying to protect it.

Organised by the racist group

As we now know, Sally was lying. There was no ‘slipping in’. The ‘far-right’ extremists had a special place at the front because it was their event. This Miko Peled talk was organised, funded and run by the ‘Keep Talking’ group. Stephen Sizer, Elleanne Green and numerous others with already troublesome histories all attended an event organised by a group that has been described as ‘neo-Nazi’.

Proof? Here is a short clip of the introductory talk and interchange between Miko Peled and Ian Fantom.

Miko Peled explicitly says it was fortunate that ‘Ian wrote to me’. He has this exchange with Ian Fantom and it is clearly Fantom’s event. Sitting next to Ian is Alison Chabloz. St Anne’s Church has since confirmed that this event was organised by ‘Keep Talking’:

This means the ‘Keep Talking’ event would have been advertised through the network of the neo-Nazi group and attended by the group’s members. Was Nick Kollerstrom there too? Following this event Peled has spoken at two events – both run by Palestine Solidarity Campaign branches – in Hastings and Eastbourne.

It is probably safe to assume that the neo-nazi group paid Peled for this talk. Peled stood in front of Holocaust deniers and other rabid antisemites and cracked jokes about antisemitism. And some people say that Anti-Zionism isn’t the same as antisemitism.

St Anne’s Church in Soho have since apologised for giving a platform to these people.