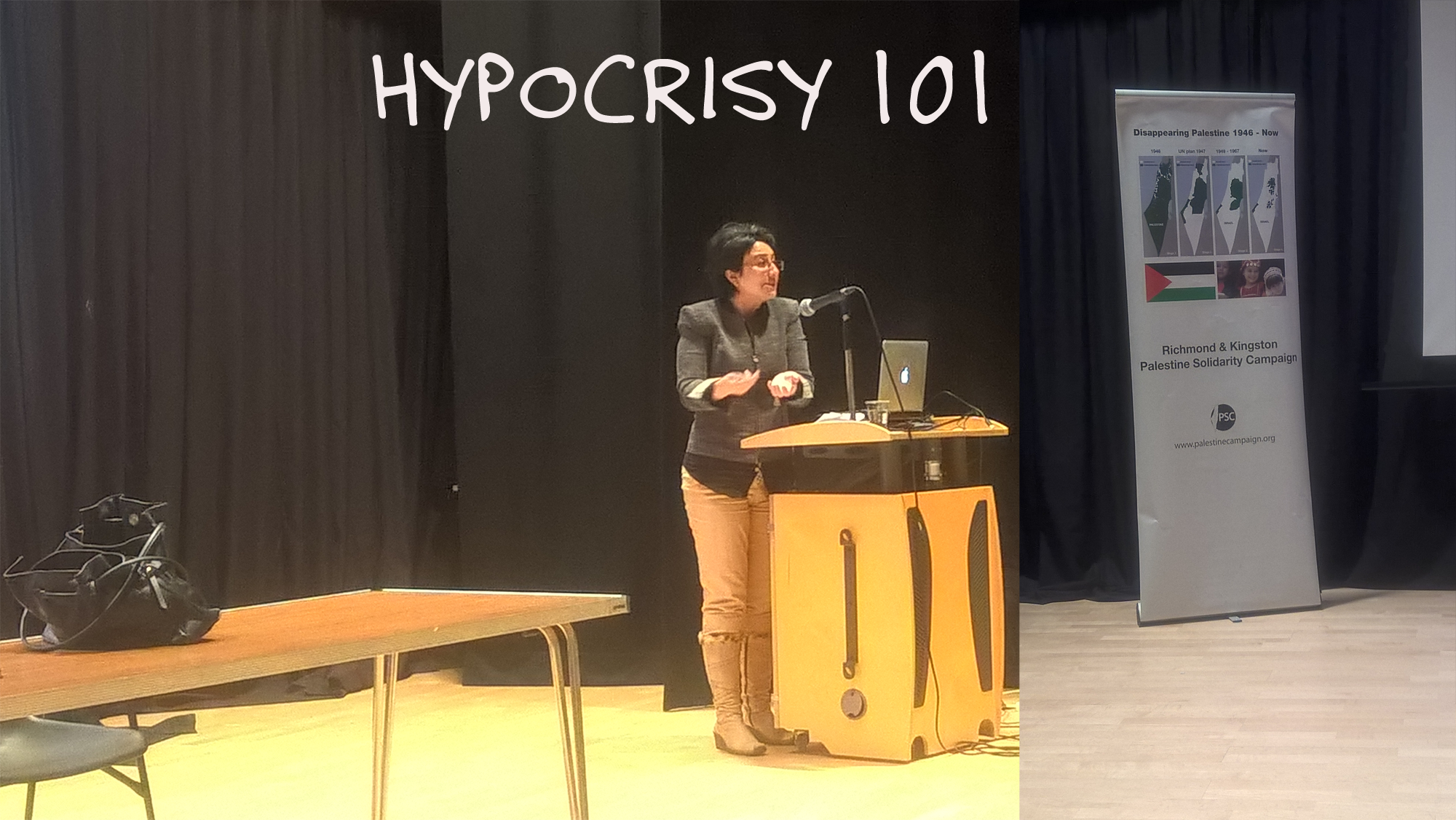 Haneen Zoabi and 180 of the adoring faithful in Richmond 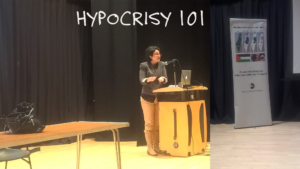 22 January 2017. I am at an event organised by the Richmond Palestine Solidarity Campaign. A big crowd, perhaps 180, have gathered to hear Israeli Arab member of the Knesset Haneen Zoabi speak. The room is full, but the demographic breakdown is simple. A large majority are white, British and over 55. It is the typical PSC crowd.

Haneen Zoabi had received a standing ovation at the PSC annual general meeting just two days before, she receives one here before she has even spoken. I am in the presence of PSC royalty.

The situation with the Arabs of Israel is complex. If Zoabi was here to fight for the Israeli Arab citizens, she would have my attention. If her aim was to improve the living standards, education and employment prospects of those who voted her into power, she would have my support. If the real goal was to reduce the inequality that minorities often experience, I’d wave a flag in her name. But Zoabi is not here to represent the needs of Israel’s minorities, she is here to perpetuate the external conflict.

Not everyone in the room is a racist, not everyone an antisemite. But many are. Two PSC activists are speaking in the row behind me. One had been to Salisbury for an event with Ilan Pappe on 19th January. He had also been at the PSC AGM over the weekend. Busy guy.

He spoke of how ‘real Palestinians’ are needed to speak up against Balfour. Pappe he said “is not a real Palestinian”. What he meant of course, was that “Pappe is Jewish”. There is no other translation that works.  This the evidence that anti-Zionism cuts too close to antisemitism to be ignored. Pappe is no Zionist. If Pappe was exactly Pappe, but with only the Jewish identity stripped away, he would be ‘a real Palestinian’ without question. Pappe’s offence here is simply his ‘Jewishness’.

For a PSC activist to suggest Pappe is not a ‘true Palestinian’, is like someone suggesting I am not ‘truly British’. No difference. None.

Two more standing next to me just before the event begins. Discussing PSC attempts to have Zoabi speak to British MP’s whilst she is here. Sir Alan Duncan’s name is mentioned, and from Duncan it was just a short trip to discussion over the Al Jazeera documentary and the ‘lobby’. In the heart of Richmond’s PSC base there is no need to even look over the shoulder as it is identified as the ‘Jewish lobby’.

Then there are the faces I recognise. Hard core antisemitic PSC groupies. Examples of the nature of ‘humanitarian concern’ that drive the Palestinian cause. In the image below are social media posts *only* from some of those who attended last night. Posts about Chabloz, Atzmon, Mein Kampf and Holocaust denial. When these are your points of reference for all things ‘Jewish’, all talk of it just being opposition to Zionism are washed away.

The reason I mention these people, is because I know who they are and those who run the PSC know who they are. They are welcomed at these events like royalty. Everyone knows them, they know everyone and they play meet and greet with the speakers. Rabid holocaust deniers some of them may be, but the Palestine Solidarity Campaign permits their entry to the event.  How many one wonders, are actually in the crowd?

Haneen Zoabi spoke for about 75 minutes and then answered questions for another thirty. The thrust of her entire talk was simple. The Israeli Arabs are a persecuted minority. The only way to save them against the ‘Apartheid’ is to boycott them. Zoabi is in search of equality that needs boycott (BDS) to achieve the dream where everyone lives together in peace. An Israeli MK, one of the only Arabs in the entire Middle East who has a democratic voice, using it to call for a boycott of the state she is meant to represent.

Then there is the visible moment of hypocrisy when the masks slips, the mask always slips. The truth is always there if you are looking for it. This time it came during the questions when Zoabi was asked about a one state / two state solution.

“We are for two states, but not one of them of course is a Jewish state.  Two states for all of its citizens. After dismantling settlements, after. No settlements (Jews) inside the West Bank. An independent Palestinian state with the borders of 1967. Right of return, Jerusalem the capital, and a state for all its citizens (once the Jews have gone)”

You can see the clip here:

There are two main problems with the entire Palestinian cause. The first is that it deliberately perpetuates a conflict. It is supported by distortion and lies. Its focus is on Israel, a tiny democratic Jewish state and it will have no intention of making real peace for as long as it manages to dupe others into supporting the cause.

The second is that every banner that gets waved over this cause, every dollar that gets spent, every march that is made, is effort that is missing from a far worthier, far more honest cause. All those fools that stood and applauded this speech, that spend their time helping the Arabs of Gaza and Ramallah to waste another generation on a pointless conflict. Those that actually believe Zoabi needs their help. These people have had their attention taken away from people elsewhere who really do need their help.

On both counts, Zoabi and her ilk should be ashamed of themselves.