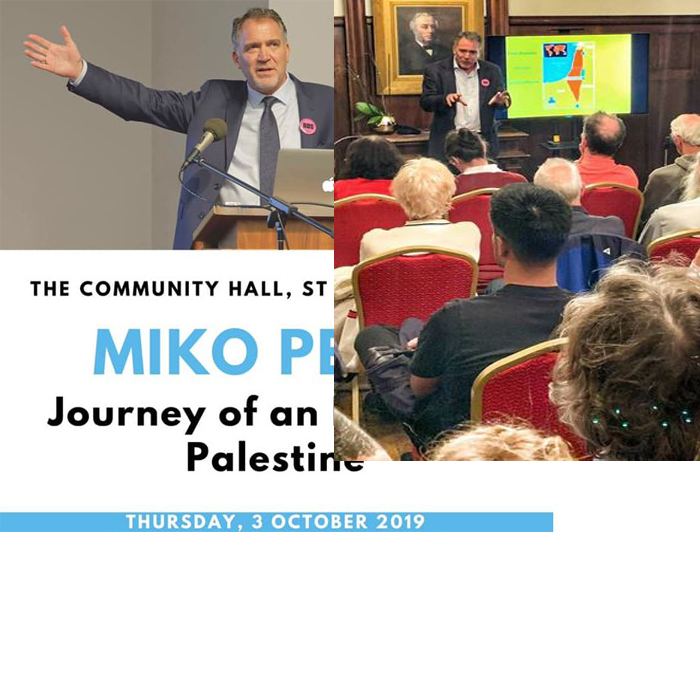 St Anne’s Church in Soho, Miko Peled and an evening with antisemites 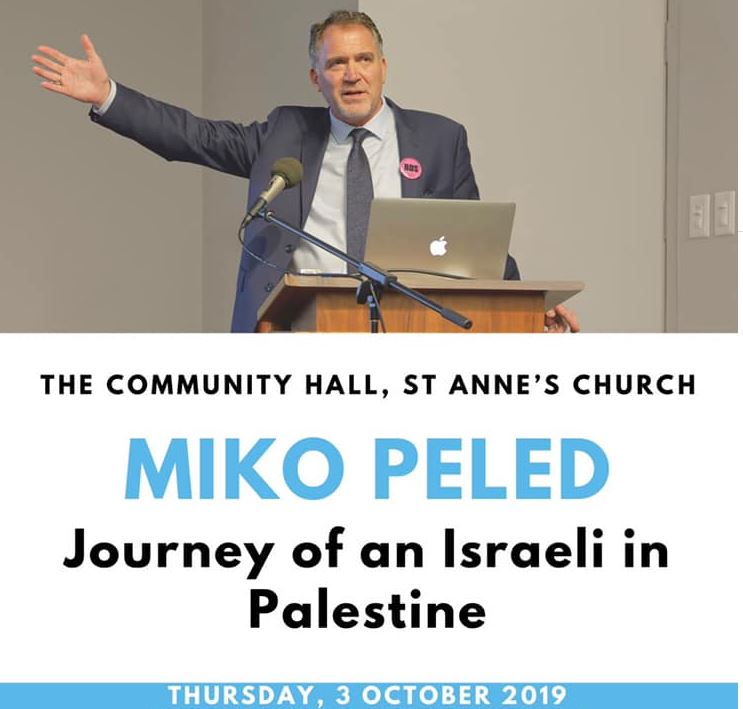 In 1656, the 366 year old banning of Jewish people in England began to come to an end. Between 1656 and 1690, approximately 400 Jewish people came to settle in England. Whilst this was taking place – in 1686 – a small plot of land was being consecrated in London by Bishop Henry Compton.  It was to be a Church for the new parish of St Anne.

Today St Anne’s church sits in Soho. It is an Anglican Church in the ecclesiastical province of Canterbury. Last night the Church gave a platform to Miko Peled for a talk titled ‘Journey of an Israeli in Palestine’. It was held in the Community Hall at the Church, a venue with a capacity for about 100 people.

Peled is no stranger to controversy. I say this because I believe he seeks it out. Peled is a professional provocateur. Like Max Blumenthal, but somewhat braver, Peled enjoys saying things that make those that don’t like him angry. He wants them to react. He has probably made the calculation that the more he provokes those pesky ‘Zionists’, the louder the audience cheers and the more books he sells.

This week he is touring parts of the UK before moving on to Italy.

Last week he was at the Labour Party Conference. This was his third time, but unlike previous years he wasn’t given an official pass and had to make do with talking at fringe events.

Not tonight. Tonight he was the main event at the Church.

The adoring faithful come to Church

Elleanne Green and Stephen Sizer both publicised and attended the event:

Green is the antisemitic founder of Palestine Live. Someone who has shared material from every shade of extremist website from both left and right. Stephen Sizer has a long history of pushing antisemitic conspiracies.

For the most part we can only guess at who else is in the room (far more to come on this). But there are those that publicly advertise their attendance. People like Robin Licker from the International Solidarity Movement: 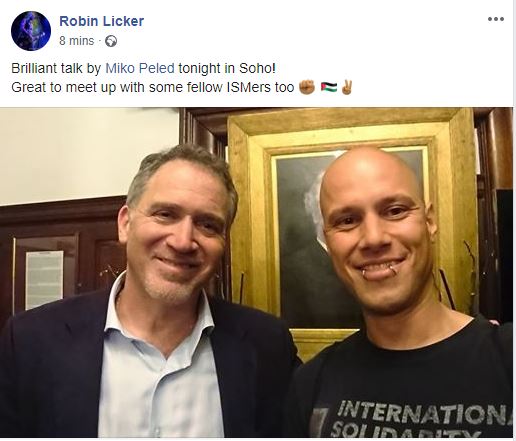 To fully immerse yourself in the ideology that St Anne’s Church holds hands with, take a look at this post from Licker: 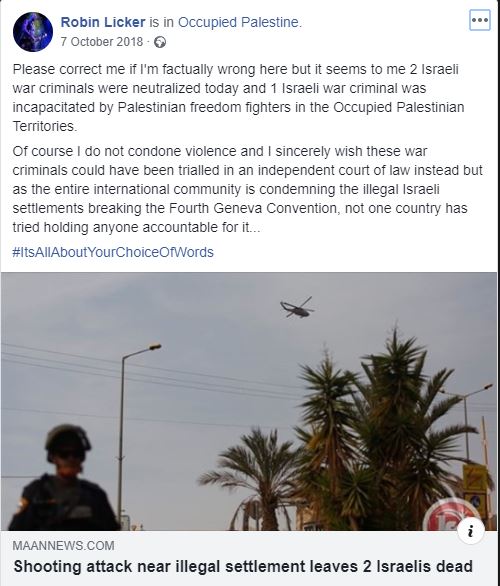 ‘2 Israeli war criminals were neutralised’. What really happened is that two Israelis, Ziv Hajbi, 35, and Kim Yehezkel, 29 went to do their jobs in a local industrial park that employs both Arabs and Jews and they were both killed by a terrorist. The attacker had tied them up before killing them. Kim lived in Rosh Ha’ayin and had just dropped her baby at a nursery before going to work. Ziv was from Rishon and left behind a wife and three children. Both the Islamic Jihad and Hamas praised the attack.

The hate of the ignorant

This language is no accident. Here it Licker talking about dead Israelis being ‘neutralised’ again:

There were only two fatalities in that specific attack. Yuval Mor Yosef, 20, and Yosef Cohen, 19 were shot and killed as they waited for a bus. A third soldier was wounded but survived. It can be hoped that Licker wasn’t referring to the only other Israeli fatality at that time, a new-born, who was delivered by c-section from his shot and wounded pregnant mother but never survived. Licker ends his tale of ‘neutralisation’ with the hashtag #vivelaresistance. Hamas took responsibility for that attack. Is this really the language of the Anglican Church?

Licker’s vile attitude is built on galactic stupidity and ignorance. How few brain cells can one have to write this post:

Jews, Christians and Muslims didn’t live as equals in this land until Israel provided equality to its citizens through its laws. Jews and Christians had discriminatory laws against them prior to the arrival of the British, as they did (and still do) throughout most of the Middle East. During the Mandate, Jews faced numerous explicit restrictions. The Christians have been fleeing Muslim persecution for centuries. The Ottomans had laws banning Jews from entry and restricted both free movement and land purchase. Jews also suffered from sporadic violence, such as when 133 Jews from religious communities were massacred by Arabs in Hebron, Jerusalem and Tzfat in 1929. Licker’s post is propaganda poppycock swallowed by someone who has allowed ignorance and blind hatred to stew to such a heat, he now pokes fun at innocent people who were tied up and shot at their workplace.

It is Licker’s right to be as thuggish, as vile, as stupid and as immoral as he chooses. But does the Church really need to accommodate the ideas of these people?

How many antisemites in the room?

I’ve been down this road too often to need to do this thoroughly again. The room was nearly full and can take 100 people: 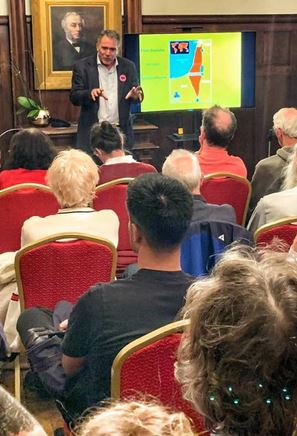 Every person I found publicly attached to the event, like Choci Mackenzie: 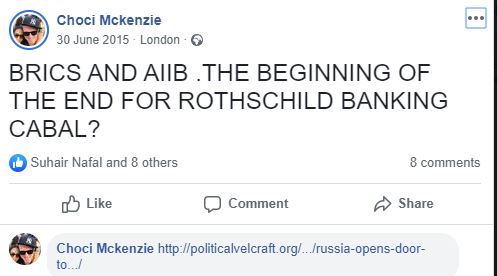 And a new one on me, Charlotte Gracias: 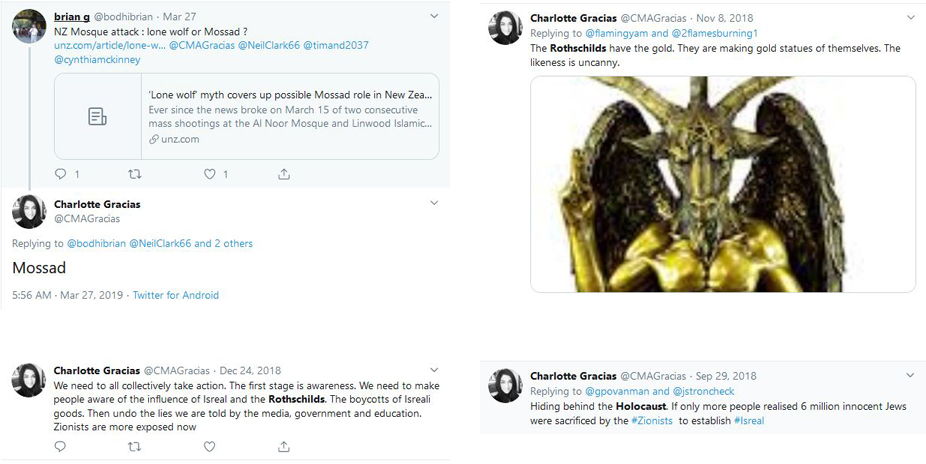 Or (and I do not have his full name) this guy, who uses the Twitter handle ‘Brynzie’: 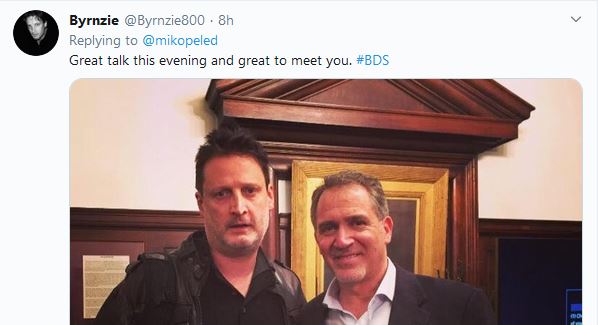 Who also seems to think those Zionists are behind everything:

And ever present is the racist galactic stupidity. 800k Jews leave the homes their communities have lived in for centuries, many forced to leave their property behind – and ‘Brynzie’ wants to blame the Jews.

In this sewer, right and left have no meaning and the concentration level of these racists is almost always above 50%. Which means if 100 were in the room, at least 50 are likely to push hard-core racist material. This is what St Anne’s Church in Soho gave a home and a voice to.

Peled in the Church

But this is Peled’s night. Peled is not a man of peace. He is a man clearly wired to seek revenge for whatever injustice his own mind has created for him. He is also someone who buckles when his weak arguments are exposed. I always put Peled’s leaving of the fold down to his inability to handle the weight of his family heritage, but it doesn’t really matter anymore what drove him over the cliff. What is certain is that he drove off it.

Peled likes provoking Jews. Those who think his ‘Holocaust, yes or no‘ comment from the Labour Party conference of 2017 is a stand-alone remark haven’t been paying attention. At UCL the same year he spoke about ‘the witch-hunt against antisemites and Holocaust deniers.’ going on to suggest to Jeremy Corbyn that he should put away the ‘nonsense about Holocaust denial and the nonsense about antisemitism‘. If you follow his threads on Twitter and Facebook you soon realise his audience is little more than an extremist, racist mob.

So Peled stands in the Church and beats his chest about how the Labour Party Conference was little more than a ‘rally for Palestine’. He isn’t wrong. With the NHS, austerity and housing as major concerns for their voters, the Labour Party did little but obsess over Israel.

Peled spoke as he normally does – blaming everything on Zionists and Israeli discrimination. Context and humanity and reason are removed. Lies are created. The end result is raw demonisation. Then look at the laugh his jokes about antisemitism gets from the crowd in the Church.

There is nothing funny about any of this. With Antisemitism visibly on the rise across the globe, the Church provides a platform to someone who ridicules racism against Jews. Peled is feeding antisemitism. He is demonising Zionism and Israel to an audience containing many who already buy into anti-Jewish conspiracy.

The Church has lost it

I am not sure what to expect from the Church anymore. My own experiences at St James’s Piccadilly, Hinde St and Lichfield have been far from encouraging. A quick glance through the St Anne’s website finds the Rector describing Mary as a ‘Palestinian Jewish mother’ (see entry from 8th September). This type of description isn’t just historically fraudulent, it is religiously insulting.

The thing is that Peled brings antisemitism with him. These people are his audience. What happened last night was that Miko Peled stood in a room, in the presence of those who share Holocaust denial and other hard-core racist, anti-Jewish material and he cracked jokes about antisemitism. The room laughed as you would expect in such a circumstance. Peled was feeding the antisemites. We can expect nothing less from Miko Peled. We can also expect nothing less from antisemites.

But is this really what we should now expect from the Church?

There is far more to come on this event- but that is the opening question. A question that one only those who allowed this to take place at the Church of St Anne’s in Soho can answer.

34 thoughts on “St Anne’s Church in Soho, Miko Peled and an evening with antisemites”