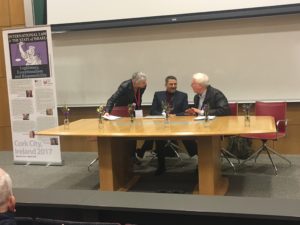 It is Sunday 2/4/2017. It is the third and last day of the Cork anti-Israel conference. A meeting of people who have chosen to spend their lives fighting against the Jewish State. The most liberal, most free, and most democratic nation in the entire region. Today saw the conference move from Cork City Hall onto the University College Cork (UCC) Campus. Despite the UCC publicly distancing the university from the conference, the UCC logo was visible everywhere.

The other element of this that must be noted are the constant references during the conference, by UCC faculty and staff, about how proud everyone involved with UCC is that this conference went ahead.

The first session at UCC

The first panel began with the ‘uncompromising’ ideas of Hatem Bazian, and swiftly deteriorated through a stream of self-hating rhetoric provided by Yakov Rabkin and Haim Bresheeth.  I have seen Rabkin before. Rabkin always talks up the European anti-Zionist arguments from the 1920’s and 1930’s without bothering to mention to the audience which cruel trick history played out on those very anti-Zionist Europeans.

Bresheeth is one of those people nobody in the world would have heard of, if not for his Jewish Israeli identity. I cannot say often enough that for Israel’s rejects, the option of a career in academia or public speaking awaits. The only element of these ‘troubled souls’ that differentiates them from unknown drop-outs in the UK or US, is the willingness of Israel’s enemies to glorify them.

Bresheeth wanted to blame Zionists for antisemitism. Bresheeth always blames the Zionists for everything. During today’s talk, he also spent his time apparently blaming the Zionists (he called it a ‘Ziophilic alliance’) for the rise of Islamophobia. But his central point was to argue that academics are clever, antisemites are stupid, therefore academics cannot be antisemites. Given how Nazi ideology found intellectual backing through academics, I would argue that Bresheeth is both an academic and intellectually stupid. He can pick which one of these drives his apparent hatreds.

It is the final comments of Independent Researcher, Joel Kovel that will no doubt take the headlines, but in truth, his entire speech could be classified as a horrific antisemitic attack. Kovel began his talk with a prophecy of doom. We are he declared, ‘at the end of days’.

He then began, as many ‘ecologists’ do, to describe how capitalism and human existence are destined for the ultimate clash, unless of course, we learn to return to ‘nature’. Which country does he see as underpinning the ‘existential’ ecological front line? Israel of course. The audience seemed to appreciate the suggestion that the world is ecologically doomed unless you can remove Israel from the Middle East. UCC cork is now pushing the idea that the outcome of the global environmental crisis centers on the destruction of Israel.

Then he actually conjured up the ‘dancing Israelis’ antisemitic conspiracy story from 9/11.  Remember, this is happening in an Irish university campus (UCC):

He was supported in his ideas, by an audience member who shouted ‘Mossad agents’, before Kovel confirmed it himself. But this is what you get when you allow these misfits to gather under one roof.  Yesterday we had accusations that Jewish mothers deliberately deprive their children of love in order to breed callous killers, today 9/11 conspiracy theories. Inside the UCC, from the front desk of a UCC lecture hall. Cork has placed itself firmly into bed with rabid antisemites.

*Important note*. Although someone in the audience did vocally oppose this horrific antisemitic conspiracy theory, there was no comment or official rejection by any of the organisers. Only antisemitism gets this type of public shrug, this air of acceptability. It isn’t as if the venues were  not warned this would happen.

The reason this video above was available was because the organisers had live streamed this part of the event. Once it became clear that perhaps they did not want to be publicly advertising the rabid antisemitism from the conference hall, the live stream stopped. This is more than mere speculation. I saw one or two speakers, including Eitan Bronstein (Zochrot) speaking to the creator of this conference, Oren Ben-Dor, telling him he shouldn’t have the conference publicly identified with this type of lunacy. Unsurprisingly perhaps, given his inability to control the output from the speakers, the live stream ‘failed’ shortly afterwards. This the ‘free speech’ of the hard left. Pure PR and censorship. Dishonest to the core.

Male domination and a wide range of views

During the course of the three days, I had many conversations with delegates. To highlight how dangerous giving this type of rabid propaganda any sort of legitimacy can be, I counted no less that 15 different audience members comment to me on how wonderful it was to hear opinions from every side. The main compliment this  one-sided  hate-fest was given, was to commend it on not being one sided. Before Cork or UCC had permitted a rabid anti-Israeli festival to take place, it should have ensured it was not enabling deceit by providing any level of fake legitimacy.

One complaint that did arise from several quarters, was the male domination of the conference. Today for example, there were fifteen speakers, and fourteen of them were male. As almost all of the anti-Zionist academics are male and given the sexism that is rampant in Palestinian society, perhaps it is unsurprising. But as usual with the hypocrisy of these left wing anti-Israel movements, much is forgiven in the name of the anti-Israel cause. In fact, if we remember that many of the female panelists present were human rights activists (not academics), this entire conference becomes one mess of classic gender discrimination. Well done Ireland!

Self destruction of the Palestinian propaganda

One paper of note, that should be filed and recalled whenever Palestinian propaganda is placed on the menu, is the paper delivered by Dr Salman Abu-Sitta. Salman presented a paper proposing the return of the ‘refugees’. He is considered an expert on the issue. Salman wanted to show how possible it is, considering both land availability and resources, for all the refugees to return.

How is this possible? It is possible because *we were shown* that almost all of the villages and towns that Palestinians claim to have lived in, are not sited in areas were Jewish towns exist. Placing maps on top of each other, at one point Abu-Sitta suggested only about 8% of Israeli towns had ‘supplanted’ Arab towns and in general, this only occurred when an existing city began to expand naturally.

This is a Palestinian admitting, through a carefully prepared academic paper, that the claim Israel is built on top of Palestinian towns is pure propaganda. Rather, as per the Israeli narrative, the two lived side by side, until the Arabs rejected partition and civil war broke out. So my advice when this paper is published is to download it and use it. This single piece of academic work undermines almost the entire Palestinian ‘Nakba’ narrative.

UCC expels all that is Jewish

The absurd and surreal continued to arrive at breathtaking pace.

Far too many incidents to mention them all. Like George Bisharat suggesting Israel ‘owes’ compensation to the Arab states for taking the Jewish Arabs away from them. There are no limits to absurdity at a conference such as this.  And of course, every time Oren Ben-Dor opened his mouth, the same words seem to reach the microphone. A story of ‘being’ and ‘denial’ and ‘Jewishness’ and ‘pathology’. He asked several questions during the three days, which boiled down to a single repetitive refrain:

“dear (insert name of speaker here), are your thoughts about Jewish ‘pathology’ as twisted as mine”?

It is difficult to express how accurate the above is, to someone who has not just sat through three days of this conference.

One final incident worthy of comment came at the very end of the final panel. Philip Franses, who suggested he had a ‘Jewish upbringing’, was painting a utopian picture of everyone living together and sharing the land. Franses was indeed an odd one. At one point in his talk, he seemed to suggest the Arabs had welcomed the Jewish refugees as they entered British Palestine (go take a history lesson Philip). Anyway, during an exchange, he asked Dr Atef Alshaer, another panelist, whether he thought it would be possible to create a shared poetry, both  in Hebrew and Arabic together. (I know, I know, just accept it).

Alshaer had politely navigated the question. This accommodating position was far too nice to the Jews for UCC’s very own James Bowen, who felt he had to interject.  Bowen suggested that Alshaer had been ‘too nice’, and went on to repeat Ghadi Karmi’s absurd stance that Palestinians were the real descendants of the Jews. But then he went even further.

He actually  laid a claim for the Palestinian people to ‘Hebrew’, as being their language. I imagine in his head, Judaism is a Palestinian invention too. The Jews were visibly stripped of their entire identity. Zionists are fake invaders with absolutely no ties to the region at all. That Bowen’s internal issues are driving his agenda are clear. How this conference ended up at Cork should also be clear to all.

I certainly won’t be returning to this city. Yes, it is pretty, and yes, the people seem externally friendly, but Cork did the Jews an absolute disservice. I witnessed it and I won’t be coming back. For me, the three days in Cork are now over,  and it is time to return home. But the hate I saw here will move forward, this is a malignancy we must continually fight.Wherever it reappears, we have to be there too.

34 thoughts on “The UCC, racism against Jews, and antisemitic conspiracy theories.”