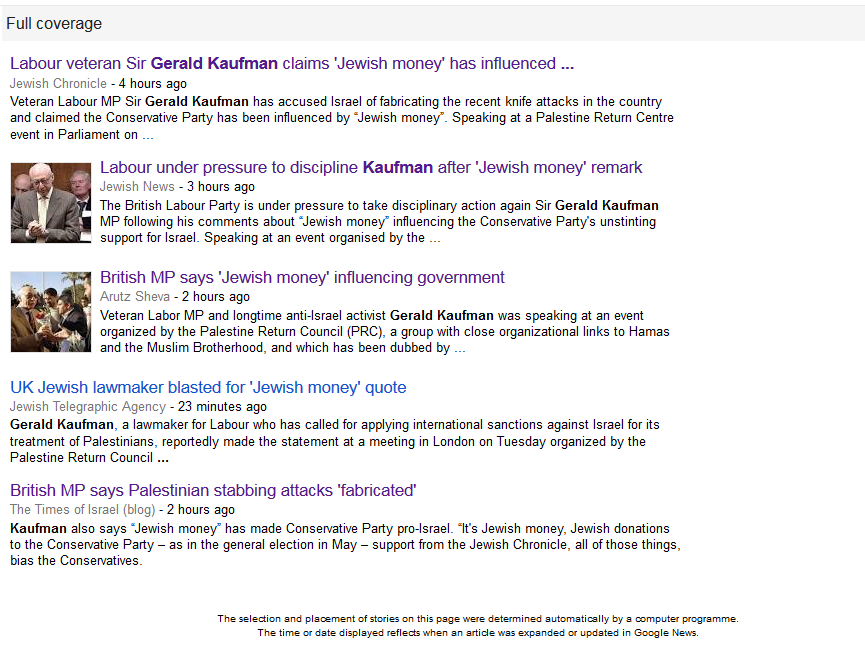 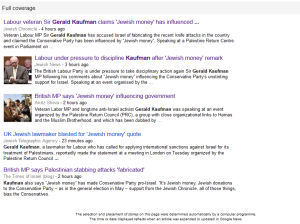 Although this blog was written early this morning, I chose to release it first on the Elder of Ziyon blog rather than my own.

Two days ago I sat in government buildings within the Westminster complex and witnessed classic antisemitic slurs. I have to say primarily, that whatever one thinks of the political position of the Arabs who were present, the antisemitism *did not come from the Arabs*. At these events, it is almost always the Western ‘friends’ of the Arabs, driven by their hatred, not of Israel, but of Jews, who drive up the level of antisemitism in the room.

I spend considerable time amongst Israel ‘hater’s and you cannot walk into a room of Arabs discussing Israel and expect to ‘feel the love’. I know we would all like to, but in reality it is not going to happen. I am trying to get across that I have really thick skin, so when I suggest there was antisemitism in the room, I mean I was in the presence of full blown Nazis.

There is nowhere on the planet today that a Jew should be confronted with classic global Jewish conspiracy theories. Not even if he were listening to whispers standing in a dark room in a remote village in the hall of the local fascist party. Everyone knows where such conspiracy tales lead and nobody can walk the path. And yet, there I was in the heart of the British Government buildings, sitting in Westminster London, hearing people talk about Jewish money, the elephant in the room, secret meetings of Jewish Bankers in 1913 and classic stories of global Jewish control. And then there was Gerald Kaufman, a British MP, one of several ‘Israeli hating’ politicians present and one that just happens to be Jewish. Kaufman has a long history of virulent anti-Israeli protest and is shadowed by claims of antisemitism and self-hating.

So when he spoke I was expecting to hear distortions, but amongst the usual viciousness (he read an email claiming most of the stabbings are fabricated so Israel can execute Palestinians and then proceeded to declare ‘that is life in Israel today’), he spoke of ‘Jewish money’.

This comment appears to accuse British MP’s of being paid off, of being bribed and of conducting their business on behalf of a distant nation rather than their voters. It also stinks of classic antisemitism. Two distinct points, not one. Remove Israel, remove the Jews and it is still a major problem. Add the Jews back into the story and we are back in the room with age old accusations of secret Jewish control. The story broke at noon yesterday, when I released my blog and a written account of the event. The local Jewish press picked it up within two hours, and two hours later British Jewish groups and antisemitism watchdogs were all over it. Demanding answers, wanting an apology, asking for explanations. The labour party was reeling as Jewish MP’s expressed their outrage and the other MP’s who were present at the event, distanced themselves and pretended they’d all gone partially deaf.

And so we have a story of an active politician in the opposition party accusing the government of being bribed, having its foreign policy ‘purchased’ and ‘deliberately ignoring random assassinations of innocent people in the street by a rogue nation’. That the entire accusation embroils a minority that has a history of being persecuted with such accusations only adds more fuel to the mix. And not one national newspaper has said a word.

Every Jewish newspaper in the UK and several in Israel has picked it up (see screenshot) but the British press are going nowhere near it. Even those newspapers who would love to take any opportunity to bash Corbyn’s Labour party are not touching it. And here is the truth; if Kaufman was not Jewish, this would have been headline news, at the very least in the Daily Mail and the Daily Telegraph and the politician in question may already have found himself out of a job. Something is protecting Kaufman and that something I am calling the ‘Kaufman effect’.

I am not suggesting the press call him an antisemite, although many others have, I am claiming that there is an issue for the press to address. It isn’t they don’t want to, they’d love to go for him, but they are too scared to touch and do not know how to handle it. How can a Jew be an antisemite? It is amongst the most ridiculous notion I have ever heard (actually a deeply antisemitic argument) that suggests the only people who cannot hate a particular race are members of that specific race). It suggests that there is actually a good reason to hate the Jews, but non-Jews are simply not ‘allowed to’.

The BBC, Telegraph, Times, Guardian, all of them, were made aware yesterday that some deeply disturbing comments had been made in the heart of the British democratic estate and yet not one of them have said a word. They need to explain to us all why they are failing to address it. They need to show us there is no such thing as the ‘Kaufman effect’. Let them show us there is no back door to Jewish conspiracy theories and no outlet for antisemitism. They have to ask the questions.

4 thoughts on “The Kaufman Effect”