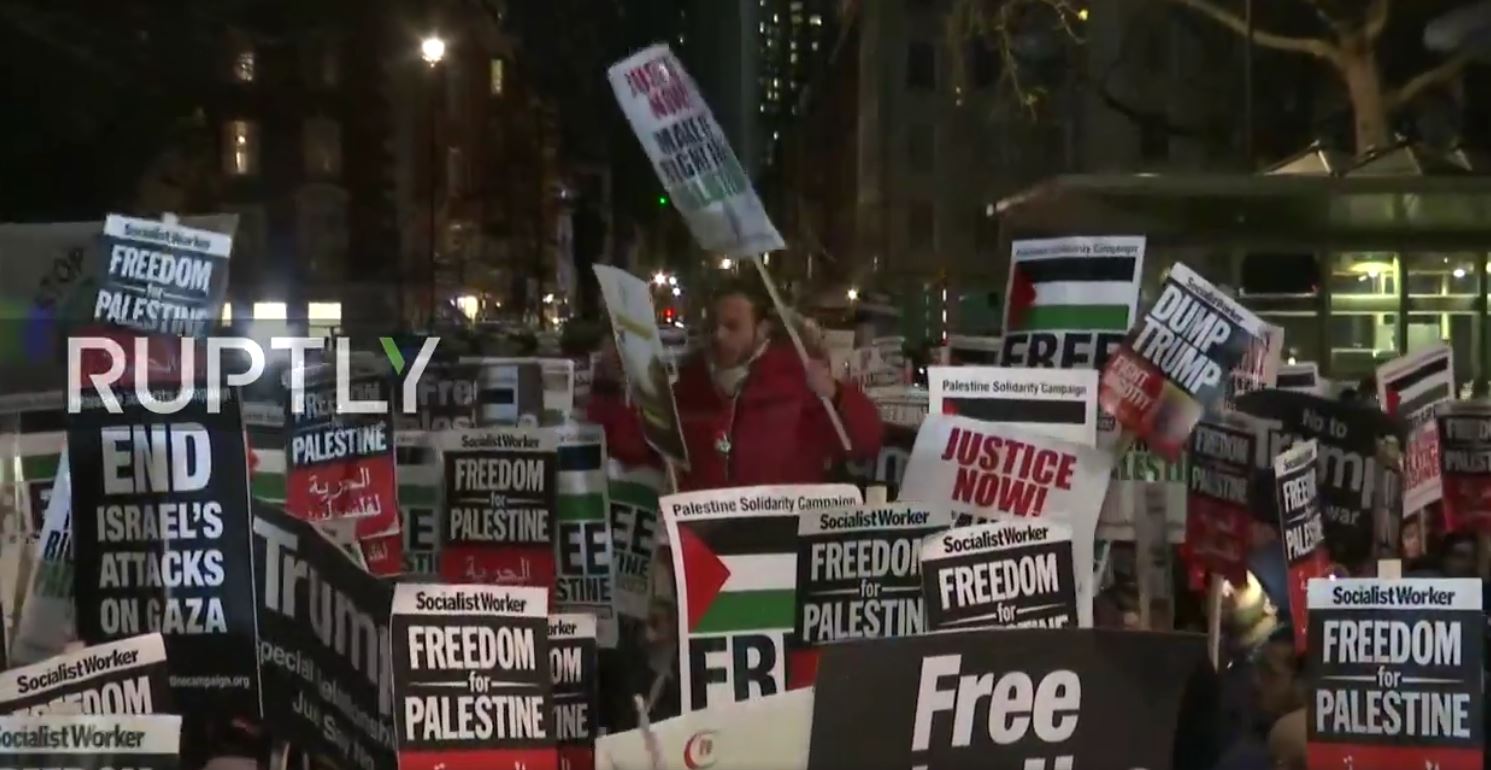 Islamic war cries heard, as antisemitism runs free on the streets of London

Jerusalem – the capital of Israel

Before discussing London, first a quick note about Jerusalem. It is where Israel’s Government sits and is inside Israel’s internationally recognised borders. Israel, as a sovereign state, has every right to name its own capital. So what is the problem here? The responsible nations on the planet should have recognised Jerusalem as the capital decades ago. Unofficially they all do, and as Trump pointed out, this is merely an acceptance of reality.

Instead, playing coward to the bullying tactics of the Arab block, the nations of the west set out on a journey that created so much damage – permitted the creation of the ‘Palestinian refugee’, gave credibility to the UN – a corrupt political body which deserves no credibility at all, gave air to a narrative with almost zero historicity, and permitted the growth of a new and insidious antisemitism. It is like extracting a tooth – the sooner you go to the dentist and deal with it, the better off everyone will be. If you don’t go, if you leave that tooth to decay for decades, the disease spreads and becomes unrecognisable. What we see today is the fallout from decades of western cowardice.

Thus, even pointing out the obvious, becomes a gesture that will ignite violence. What is it with the West and a fear of violence? It is better to know now, if the person you think is your friend will turn violent every time you upset him. Isn’t it? Like a wife who suffers abuse and is terrified of the monster in the bedroom, when it comes to Israel, the West will do everything to placate that monster. Just like the tooth, the best way to deal with this is to deal with it, not hide.

Everyone is also up in arms because the POTUS, Trump, was the one who made the declaration. Which creates a problem for the media outlets who see Trump as the devil incarnate. These people, who are convinced that everything Trump does is wrong, and about to cause World War 3, cannot support Trump even when he is right or tells the truth. An anti-Trump reflex came into play. Israel didn’t just suffer from those people who always hate Israel, it suffered because the only thing more hated by many European media outlets than Israel, is Donald Trump.

In effect, it left little motive in the media to try to act responsibly, or diffuse any anger, because a ‘spontaneous’ violent outburst would help ‘prove’ that Trump is a danger to world peace. Rather than run articles explaining that in effect, Trump had only pointed out that because everyone already acts as if Jerusalem is the capital, and because Israel has the right to name its own capital, surely it is better to recognise the reality, they chose to focus on and amplify the angry voices. Even some staunch Zionist outlets, failed to support the move, because it originated with Donald Trump.

Across the world, over the last two days we have witnessed the usual mob gathering in cities to attack the ‘blatant provocation’. Absurdly pushing the idea that pointing out reality can somehow damage a peace process, that the Palestinians have been blowing up for decades. Last night, 8th December, there was one in London. It was called by groups like the Palestine Solidarity Campaign and Stop the War Coalition, and friends of Al Aqsa. It was also supported by organisations such as War on Want, Socialist Worker, and Jewish Voice for Labour.

The event itself was full of religious incitement and anti-Jewish hatred. The crowds were chanting anti-Jewish (not anti-Zionist) statements in Arabic. Calling for a war to free Al Aqsa, and reciting the phrase ”Khaybar Khaybar, ya yahud, Jaish Muhammad, sa yahud’ ( Khaybar, Khaybar, O Jews,  The Army of Muhammad Will Return ) – in reference to the attack by Muslim soldiers on native Jews in Khaybar in 628ad.  There were also cries of death to America and Israel. You can see a short clip of the footage here:

The image below is of one of those leading that ‘Khaybar, Khaybar’ chant. He is holding a sign from the Palestine Solidarity Campaign, and is surrounded by other signs both from the PSC and Socialist Worker. 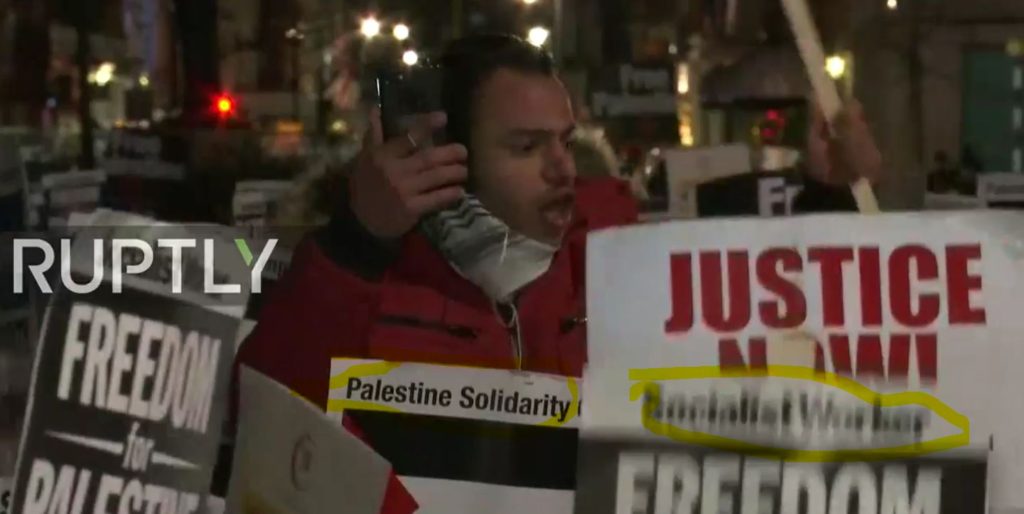 A generation ago, this type of hate used to be on our TV screens, and we would view with horror, the antisemitic chants and hate being aired in capital cities like Beirut, Damascus, Tehran, Baghdad, and Tripoli.  As we watched the outpouring of anti-Jewish rhetoric, how safe we felt in our western homes. Today, we see it on the streets of London. Calls for a religious war against Jews, at a demonstration supported by charities such as War on Want, and logistically assisted by the PSC and Socialist Worker. The hard left – aligning with an antisemitic Islamic war cry.

Who else was there? Jewish Voice for Labour of course. Glyn Secker, their secretary, even spoke at the event, no doubt ‘oblivious’ to the anti-Jewish chants filling the air. It is obscene that this group, using the proxy name ‘Free Speech on Israel’, was actually given additional legitimacy by Tommy Sheppard inside Westminster only a few days ago. Is this really what you wanted to give a platform to Tommy?

Within the crowd, comments about ‘bloodsuckers’ could be heard, also ‘believe me we’ll eat your blood’, along with other antisemitic statements. These groups, all of them, need to be held to account for aligning with blatant anti-Jewish activity in London. 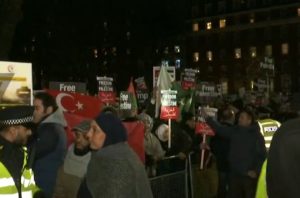 In the name of Free Speech, cries of ‘death to America’ ‘death to Israel’ and calls for an Islamic war against Jews go unanswered on our streets. The Jews of the UK look around and ask themselves when somebody, anybody, will take any notice. Our Government and police operate a strategy of containment. Let them get on with it, they think, because again, the alternative is to face the hate down – the last thing that any Western government really wants to do.

One day it will have to act, because this type of hate, will eventually force the issue. In the meantime, for as long as only ‘Jews’ are the target – it is far more convenient for everyone to pretend that the toothache will go away all by itself.

191 thoughts on “Islamic war cries heard, as antisemitism runs free on the streets of London”