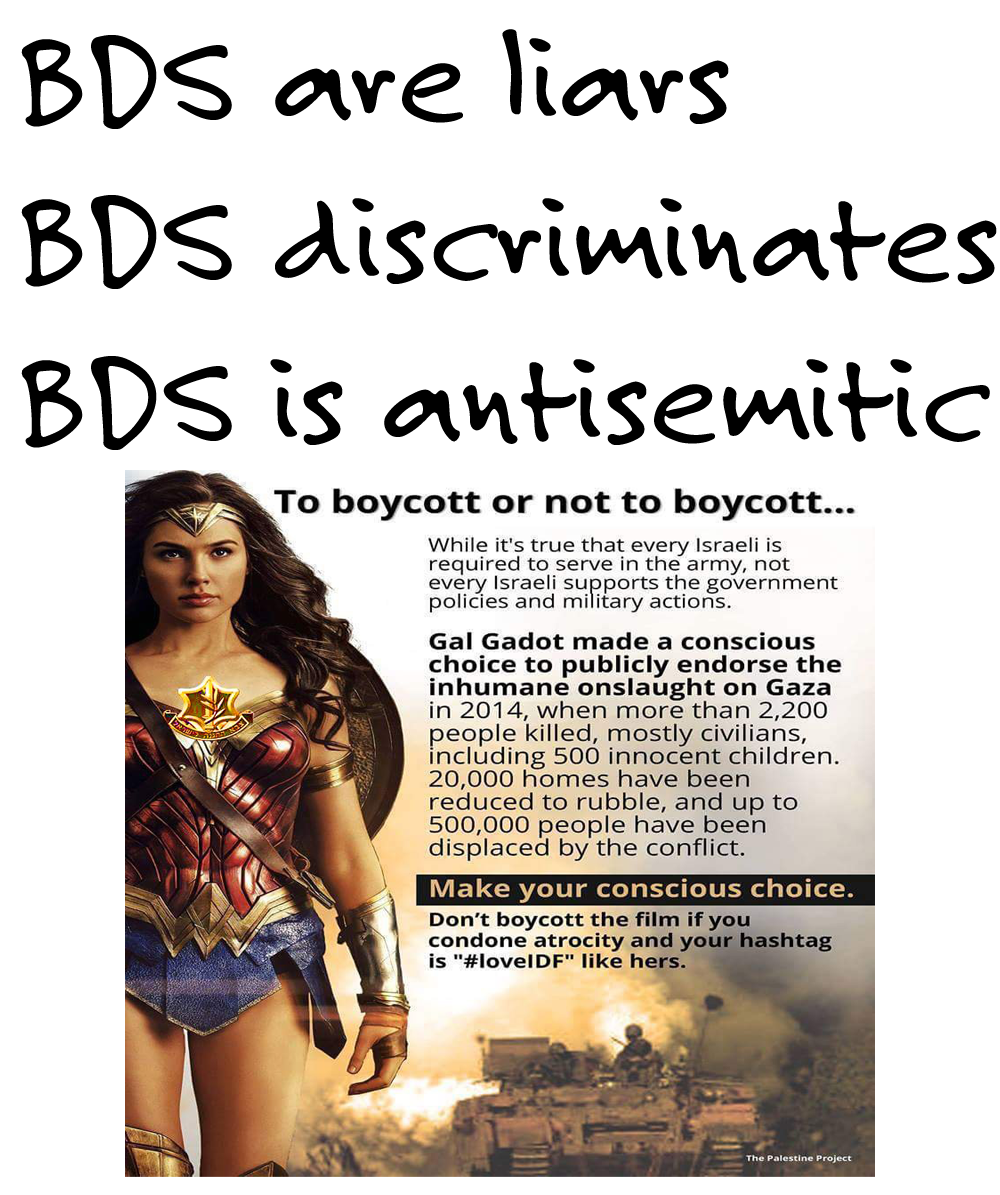 Gal Gadot is the new ‘Wonder Woman’. Gal Gadot is also a proud Israeli. Gal’s nationality, religion and political opinion are hers to hold.  BDS once again shows that it is little more than a Jew hating lynch mob, that everyone with a conscience should refuse to engage with.

It isn’t surprising that Lebanon wanted to boycott the Wonder Woman movie. The Arab boycott against Israel existed decades before the Arab Palestinians were even recognised as a separate people.  Arab nations have always had a problem with advertising successful Israelis and Gal Gadot is a very successful Israeli. When you want to spread the propaganda that your enemy is the devil incarnate, it doesn’t help when Israeli citizens are successful scientists, sports people, academics and movie stars. Boycott makes the intended distortion easier.

Jordan’s suggested boycott of the movie is less understandable. After all, is there any point in Israel signing peace treaties with these nations? Perhaps for some of the Arab nations, the boycott is an excuse. After all, having Gal Gadot as a champion on screens in a deeply misogynistic society presents its own internal difficulties. Boycott is perhaps a back-door method of rejecting female-positive messages within the movie.

I always argue that the BDS (boycott, divestment, sanctions) movement is hypocritical and deeply antisemitic. I compare it to a lynch mob, ruled by the evil intent of those at the front. It does not matter if you are a social justice warrior, fooled into believing BDS is some meaningful humanitarian escapade. All you are doing is empowering the mobsters. After all, as a movement gains momentum, it doesn’t constantly need your permission to act.

We have to be thankful that as a mob that is driven by uncontrollable hate, BDS activists often show us exactly how hypocritical, discriminatory and antisemitic they are. Which brings us to the boycott of Gal Gadot. This an image from the Palestine Project: 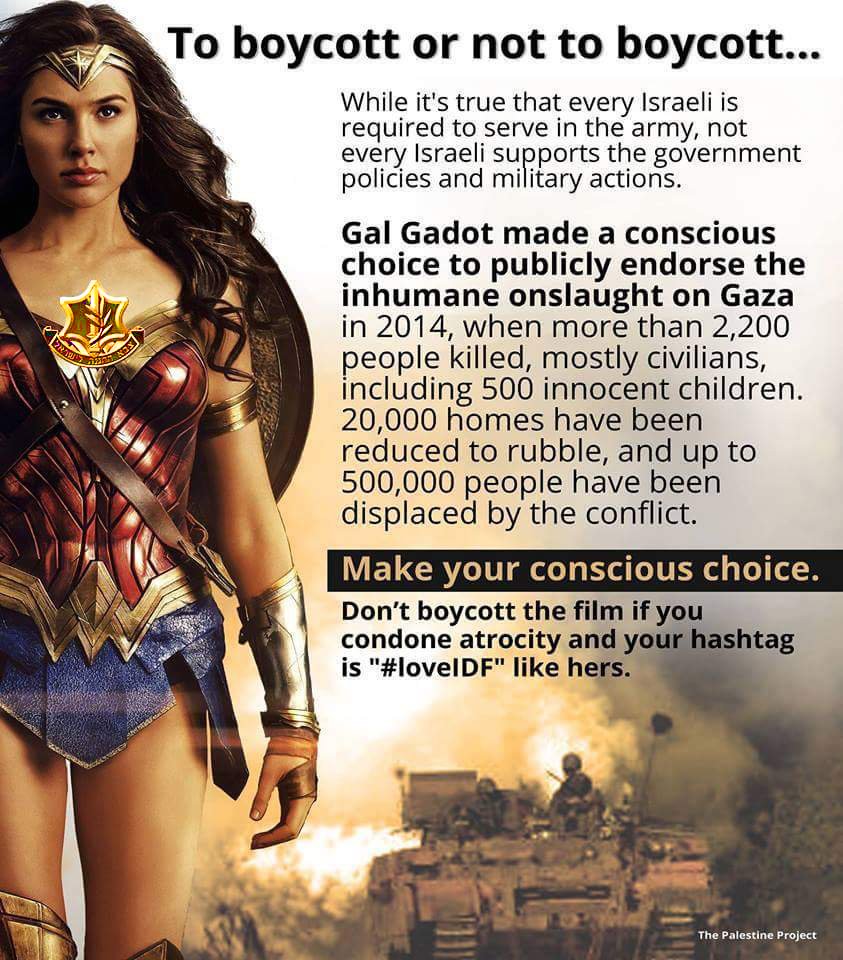 To avoid claims of unacceptable (and illegal) discrimination BDS consistently states it runs an institutional boycott. This from the website:

“In its 2005 BDS Call, Palestinian civil society has called for a boycott of Israel, its complicit institutions, international corporations that sustain its occupation, colonization and apartheid, and official representatives of the state of Israel and its complicit institutions. BDS does not call for a boycott of individuals because she or he happens to be Israeli or because they express certain views.” (BDS website)”

From the section on the cultural boycott:

“Anchored in precepts of international law and universal human rights, the BDS movement, including PACBI, rejects on principle boycotts of individuals based on their identity (such as citizenship, race, gender, or religion) or opinion.“

‘Rejects boycotts of individuals’. This an image that was promoted on various BDS Facebook pages globally: 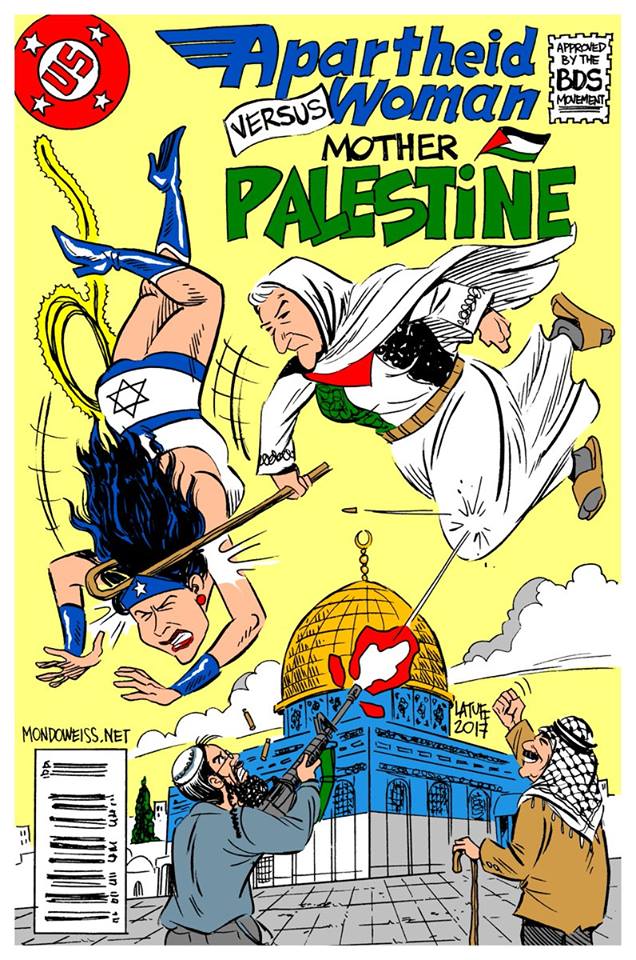 As experts in PR, BDS are well aware of the negative and illegal discriminatory side-effects of switching to boycotting individuals. So they don’t publicly promote it. But it doesn’t matter, because they know that those at the front of lynch mob will do it for them. 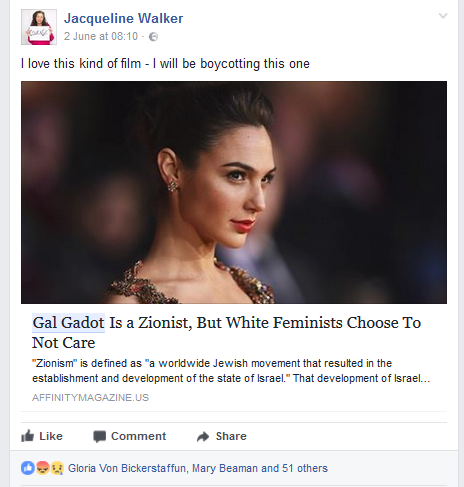 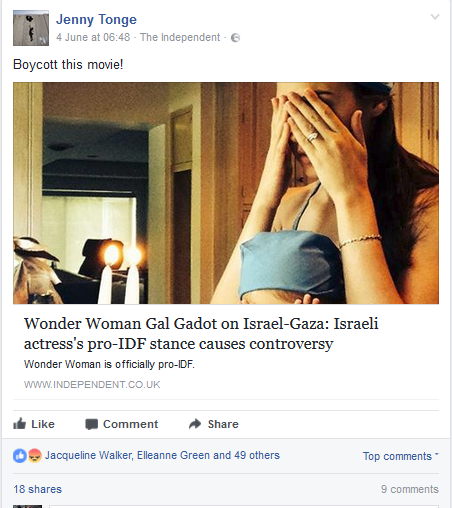 Even when media picked up on the boycott, and tied it back into BDS, they failed in their duty to report that the attack on Gal Gadot is discriminatory. They failed to highlight that it contains evidence of the hypocrisy of the entire BDS movement. Put the Gal Gadot boycott in your memories. The next time someone tells you BDS doesn’t discriminate, the next time someone spreads the lie that BDS isn’t about picking on Jews, ask them why Wonder Woman was ever chosen as a target for boycott.

Gal Gadot is being discriminated against because she was born an Israeli Jew. If you cannot recognise that, you are already part of the problem.