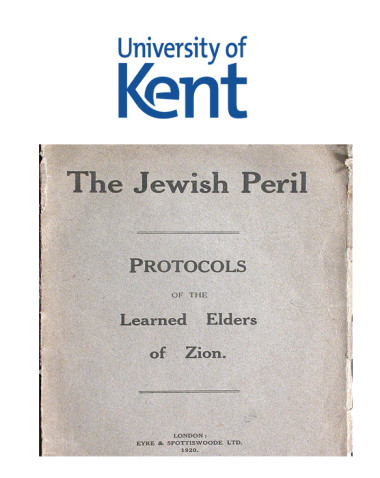 A letter to the University of Kent – antisemitism on campus 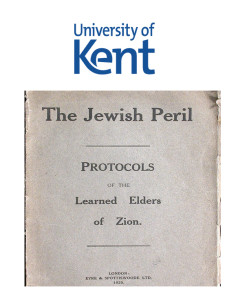 I wish to register a formal complaint against the university of Kent for allowing and promoting antisemitism within campus. In your university I heard mention of the ‘Elders of Zion’. A 100-year-old fake text that details the minutes of a non-existent meeting where Jewish leaders discussed their goal of global Jewish hegemony. It is a forgery responsible for spreading the disease of antisemitism and played a pivotal role everywhere that Jews were persecuted or slaughtered.

Hitler referenced the ‘Elders’ in Mein Kampf and it was taught as a factual document in Nazi schools. It has been claimed that the forgery served as the Nazis’ “warrant for genocide”. You can no more wave the Protocols of the Elders of Zion in my face than you can wave a swastika. There is no ‘context’ that allows for it. What I heard at an event on your campus was raw antisemitism.

Amira Hass said was that what we see today is the result of deliberate planning by a hidden group of Jews called the ‘Elders of Zion’. It was all planned. In a liberal democracy that bends to the will of the elected government, the idea of hidden plans and puppet masters is the stuff of conspiracy theorists. This is a conspiracy about Jews and secret plans for domination. You can listen to the comment itself here:

This in turn means we are not witnessing a natural bubble of cause and effect, violence begets violence, and so on, but rather a deliberate plot to manipulate events so as to serve a higher purpose. Children (on both sides) that die are sacrificed on the altar of the master plan.  It is a classic antisemitic blood libel. Children are being murdered so Jews can have their Matzah.

I frequently go to events about Israel and have developed a thick skin. I let the distortions, lies and propaganda pass me by without blinking. I reject silently most of what Amira Hass spoke as hate speech that misinforms, incites and de-educates. What I am not willing to listen to, nor should I have to, is blatant antisemitism. During her talk, Hass used the word ‘Jewish’ on more than 20 occasions. Not ‘Israeli’, but ‘Jewish’. She invoked the ‘Elders of Zion’.

In recent months in the UK, I have heard talk of Jewish money, been informed of Jewish global control, Jewish blood-lust, Jewish racism, Jewish greed, Jewish media control, Jewish banking control and Jewish plots and conspiracies. At every anti-Israeli event, every single one, it is there, oozing from the delegates like testosterone at a football match. 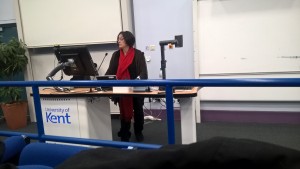 I walked into your event without anyone asking my identity. Such is the norm. Last week I went to the AGM of the Palestine Solidarity Campaign, a meeting of 300 of the heads of this campaign in the heart of London, and not a single policeman stood outside. As you know I cannot hold an event like the one you held a few days ago. I cannot give air to the ‘other narrative’. The logistics make it 100x times more difficult, which in turns means 99% of events on Israel are one sided. In addition, the ‘red fascist’ denial of giving a stage to Israelis, means any argument against the narrative of hate, has to be made by proxy.

In the past fortnight there have been 10 ‘hate’ events such as yours in London alone. It takes months to plan one for ‘the other narrative. It requires security, intense planning and even then, as with the case of a recent event in Manchester, may end up being called off. Just last week on another campus in London one was disrupted due to violence. In that specific event, the violence was directed towards a man who wants to dismantle Israeli settlements and create a Palestinian state. It doesn’t matter to the ‘red fascist’ thugs on campus. You know that this is happening, yet like most VC’s in university today you choose to cave in to the ignorant hatred of a lynch mob.

There is no academic debate being allowed here, no exchange of ideas. “That you didn’t know” antisemitism would be present at such an event is not an answer. You should have known – it is always there. Antisemitism is one of the primary fuels of the anti-Israel campaign. I personally believe if you could remove it, the motor wouldn’t run at all, an opinion built on the experience of attending scores of such events. What we are witnessing is the combined power of 3 strands of antisemitism, far right, far left and Islamic. It is strong, it is insidious and it is infesting universities across the UK. So you cannot claim to be ‘unaware’ unless you have chosen to be. In universities across the UK cowardice, ignorance and bigotry are lending a helping hand to antisemitism.

The horror that modern antisemitism is being spread in campus, amongst the educated, rather than in the deprived neighbourhoods, makes it a considerable threat. One that the University of Kent just assisted. Over here of course, they translate the word ‘Jewish’ as ‘Zionist’ to evade censure, then they can say anything they like. Last week, on the FB timeline of someone advertising your event, I saw a comment of ‘just kill all the Jews’. Two minutes later it had been changed to ‘Bastard Zionists’. In the mind of the author they are one and the same.

As a Jew in the UK there will be no running. I will not sit down and ignore the fact that antisemites are taking control of the streets and the campus. I will not silently turn my back as if I do not know where this road leads. I will not let the University of Kent provide a stage for the Elders of Zion and walk away as if I just have to accept it.

A simple apology is not good enough. 200 people left the room having been fed antisemitism on your campus. These people need to be told that what they applauded was antisemitism. Each of those people is a little bit more ‘extreme’ than they were before hearing the speech. Some had a pure ‘fix’ for their addiction. And the Jews in the UK? Well, we are all just a little bit less safe than we were.

I heard mention of the Elders of Zion in your university. I heard talk of Jewish conspiracies. I look forward to receiving your thoughts.