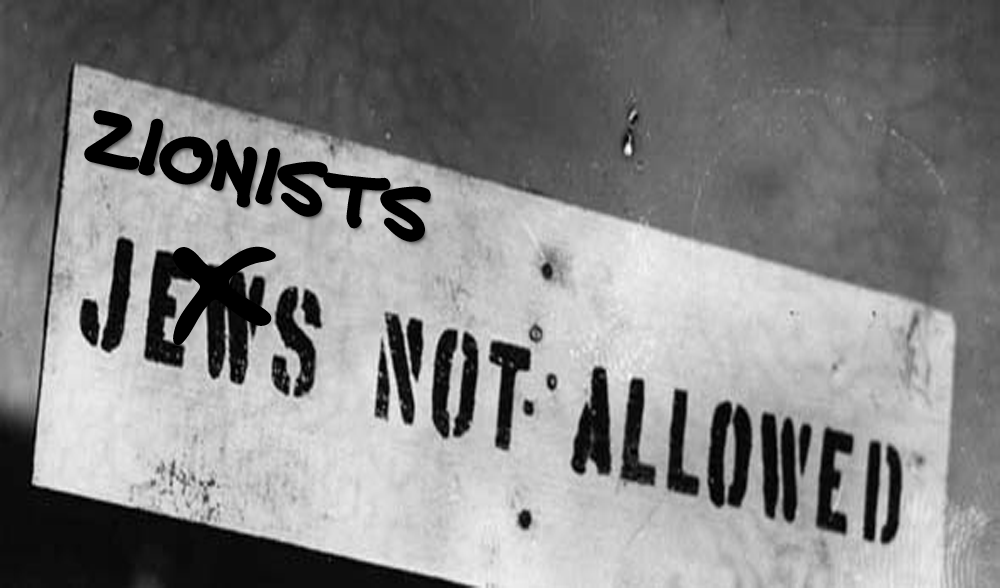 Fighting through law, fighting in the streets. Both may fail the Jews

From songs that ridicule the Holocaust to blaming Jews for the Grenfell fire on Al Quds Day. From a battle in law to a wider societal struggle. It would be foolish to understate or ignore the signals we are receiving from the current UK landscape.

23rd June 2017. I have just left the Marylebone Magistrates Court, where the Alison Chabloz case has just had another sitting.  For background, Chabloz produced and uploaded some truly vile videos, poking fun, belittling and denying the Holocaust. Arguing her actions were against the law, a private prosecution was brought. The CPS eventually picked up the case. She has now become a ‘darling’ of hate groups. Chabloz was recently a guest of such a group in Canada. Chabloz was also the ‘entertainment’ at a gathering at a secret meeting of the “neo-Nazi, white supremacist” London Forum. David Irving was also there.

The case itself is laden with cumbersome legal arguments. An original charge was dropped earlier this year, because Chabloz had uploaded the video to YouTube whilst in Switzerland, rendering the action ‘outside of UK jurisdiction’.  Today, as the ‘banter’ went on between defence and prosecution, it became apparent how archaic the law remains when discussing online communications. As with most of English law, precedent is key, and the argument centered around case law examples about posting letters. Using the delivery of a letter through the Royal Mail system to argue a point over a hyperlink. As truly awe-inspiring as our legal system is at times, it can also be frustratingly stupid.

Chabloz arrived with a few supporters. It wasn’t a pleasant feeling. Sitting in a court room in central London in 2017, only to be outnumbered by Holocaust deniers and neo-Nazis. This as legal minds,  clearly challenged by the concepts of virtual exchanges,  argue procedural legalities over a song ridiculing a genocide of Jews.

But this is not the only case being heard at present. Mick Napier is the Secretary of the Scottish Palestine Solidarity Campaign. Napier is also currently on trial. The current trial involves Napier’s actions against an Israeli run cosmetic stall in Aberdeen. Tuesday 27th is the court date set for summing up. Napier, who likes to talk a lot about anti-racism, spends a lot of his time mixing with hard core antisemites.  Typical of the blindness of many anti-Israeli activists, Napier never seems to identify antisemitism, even when he is surrounded by it.

When it comes to actively goading Jews it seems almost anything can be said without creating ripples beyond the confines of the offender and the directly offended. Take Gilad Atzmon for example: 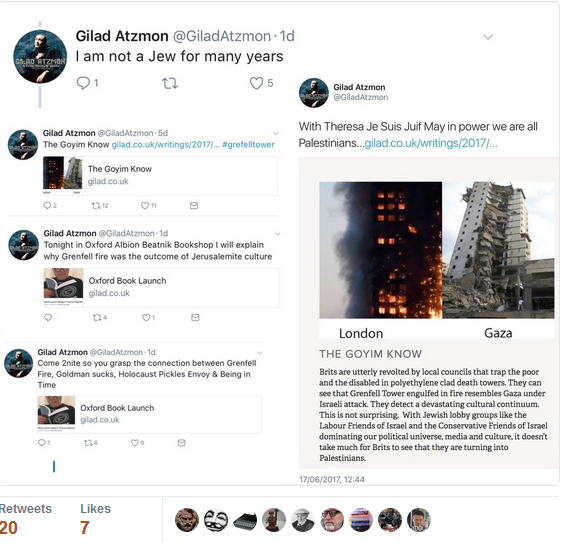 According to Atzmon, ‘Jerusalemite culture’ caused the horrific Grenfell fire. If you think such sickening linkage is only in the mind of Atzmon, you are not paying attention. Last weekend at the Al Quds day march, Nazim Ali on the megaphone tried whipping up the crowd with the same deeply antisemitic rhetoric. Openly creating the linkage in the middle of Regent Street in London. Here is a video of some of those comments from footage I took whilst walking with Hezbollah supporters.

This Islamic method of whipping up mob hatred against Jews has frequently been used. History is full of such examples. The massacres of 1929 were stirred up through the spread of false rumours, as were the 2015/6 knifing attacks. You make up stories blaming the Jews for something, whip up a crowd, and then wait for the anger to direct itself. Prof. Zvi Yehuda argues the 1941 Farhud in Iraq began with anti-Jewish preaching in a mosque. It isn’t restricted to Islam. In the mind of the antisemite, the Jews are always blamed for everything. From the plague to the Grenfell fire. Almost every tale of a massacre of Jews begins with a man telling lies to a crowd.

Nazim Ali wasn’t hidden away in a room with a keyboard. He walked freely through the streets of London. The law didn’t stop him.

Nor did it stop the waving of the Hezbollah flag. A mindless loophole allows radical Islamic flags to be waved a few minutes drive from where radical Islamists had brutally murdered innocent British civilians just a few days before.

The ‘rule of law’ existed when blacks could not vote in the USA and existed when  A.V.Dicey wrote the ‘Introduction To The Study Of Law Of The Constitution’ in 1885. At the time women couldn’t vote in the UK and Dicey was opposed to Women’s suffrage. No salvation for women there. Law bends to the shape of the society more than it shapes it. Throughout history Jews have more frequently been oppressed via the law, than saved by it. Taking false comfort in some preconceived idea of an ‘enlightened environment’ is a mistake other Jews have made before.

In truth, the law will struggle to protect Jews because in actions against the individual it becomes a battle of civil liberties. One man’s freedom against another.  In battles against the larger crowd, law is more likely to eventually bend to the will of the crowd, than protect individual liberties. At a certain point, as the size of the crowd increases, the crowd eventually become those who write the law.

What restricts an antisemitic outburst far more than the legal minds that will fight over the meaning of a hyperlink, is the way that the majority of society reacts to it. If 10,000 Londoners had blocked the Al Quds march and drowned out the hate speech of Hezbollah, the march would not have happened. And next year, the police would have refused permission for it to even go ahead. Right or wrong, heads roll and scapegoats are found after every public outcry.

Employers, neighbours, friends, relatives, strangers in the street. The same way that abusive terminology against blacks has been almost eradicated from social acceptance at any level. Jews should have expected the same type of protection.

And yet it hasn’t happened. Instead when rampant antisemitism is highlighted in the Labour party, the main party of opposition, they create an inquiry that almost entirely whitewashes the problem. Almost the entire Jewish community can be outraged by what it considers an odious antisemitic remark, and the Labour party remain incapable of using the punishment of expulsion. One by one, the suspended are allowed back inside. On Monday at JW3 there is a screening of ‘a new powerful documentary about how antisemitism has been fostered in the Labour Party’. 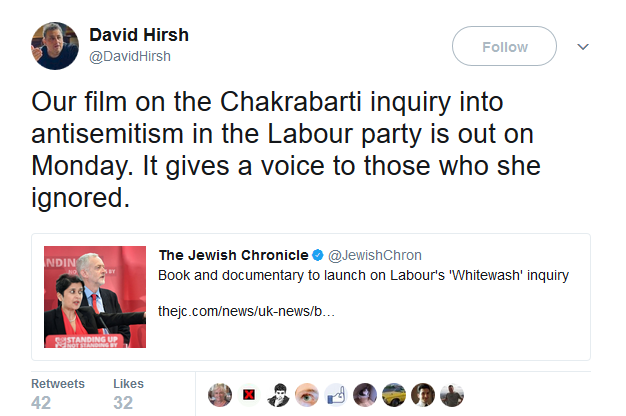 The threat may be global, but we live in different environments. Each national incubator is powered by its own unique characteristics. What is happening in the UK is different to what is happening in France, Sweden and elsewhere. Even if we can recognise some similarities. We have to understand that the problem for the Jews in the UK needs a UK response. It is why when Israel becomes involved in the fight, so much of that effort is wasted energy. A global top-down approach to the rise of Jew hatred cannot cater for the individual aspects of each regional battle.

The sands of our society are shifting. Demographics are changing and with them societal loyalties, relationships, norms. New political alliances are being formed. There are already constituencies in the UK where hating ‘Zionists’ can win a candidate a seat as an MP. Whereas two decades ago Jews may not have felt the need to turn to the law to protect them, because the societal environment was so accommodating, today there is a growing feeling that this environment is deteriorating and with it, comes an increasing urge to turn to the law looking for help.

Yet look at the recent judicial review that found the government had stepped outside its remit. In response to the decision, Jonathan Turner, chair of U.K. Lawyers for Israel, said the legal battle against BDS in the U.K. is like ‘trying to shoot back against a juggernaut with a pea shooter,’. Even though this particular case is little more than a PR stunt for the BDS crowd, it highlights the difficulty of opposing people’s freedoms, even when they are so clearly discriminatory.  If the mob that wants it, is willing to use our own freedoms against us, they will get what they want and deny us our own freedoms in the process.

The Zionist or the Jew

1400 years ago, as the first edicts against Jews in Spain took place, tens of thousands of Jews converted. 653ad brought new measures that all converted Jews had to promise to put to death, either by burning or by stoning, any of their brethren known to have relapsed to Judaism. In Spain aside from the years of Muslim conquest, society generally viewed the convert as the better citizen. The bad citizen was the Jew that adhered to his faith.

We can see in history, that whenever persecution of Jews increases in a society, there will be a few within the Jewish community who become willing to stand with the mob and throw stones against the Jews. The anti-Zionist Jews are nothing new.

Jew hatred always looks different at each new mutation. The badly defined term ‘Zionist’ used today by anti-Israel activists is a hybrid of part neocon, part Jew and part Illuminati. Through the use of this hybrid it becomes possible for someone to believe that Zionists control the world and are the root of all evil whilst announcing loudly he opposes antisemitism.

Corbyn’s cronies today believe the UK has never been as close to a Marxist revolution as it is today. Believing they will soon be the ones writing the laws. And who will they turn on, who will they blame for all societies ills? The Jews who have not converted of course. Zionists.

So marching against the Jews is a growing number of those who conflate Zionism with corporate greed, corrupt government and the failings of capitalism. The simple switching of the word ‘Jew’ with ‘Zionist’ blunts almost every legal tool. ‘Zionism’ simply isn’t a ‘protectable’ identity. It permits a free for all against Jews. It really was that easy.

And as they wave their anti-Israel flags, these activists conflate hating Jews with sympathy for the Palestinians.The flags of the PLO, Hamas and Hezbollah are waved, not in any action that can help Arabs living in the West Bank or Gaza, but as part of a movement against global Jewish financial control. It is no coincidence that most of the anti-Zionist Jews are Marxists.

Humans beings are full of failings. individually and collectively. Nothing is certain about the way this all plays out. The UK is currently in a battle for its very soul. The future of the Jews on this island of ours isn’t the only thing at stake.

One thought on “Fighting through law, fighting in the streets. Both may fail the Jews”