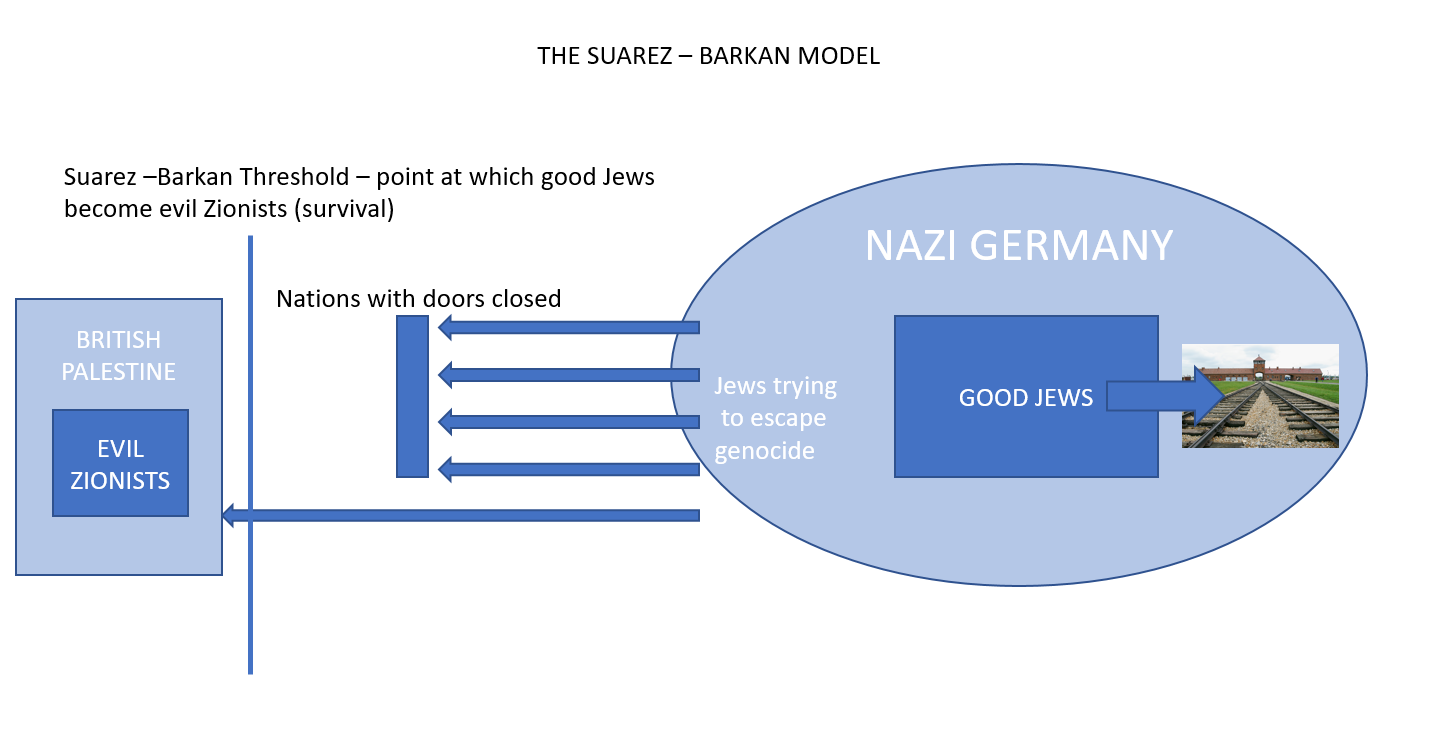 ‘The only good Jew is a dead Jew’. A horrific statement not so openly suggested in Europe or the USA in 2017.  In reality, this line is actually being propagated in almost every university campus in the west. Yes, it is camouflaged, but do not let that distract us from the sickening message underneath. Let me explain.

Thomas Suarez recently published a work of revisionist history titled ‘State of Terror’. What Suarez did is simple. He engaged in research using the British archives in Kew as a way of proving what he already believed, that Israel is a nasty little state created by nasty people, who did awful things. With a highly distorted personal radar, careful document selection, and an unerring ability to misinterpret intentions, Suarez produced a piece of writing far removed from both historicity and context.

Because therein lies the rub, part of the missing context of the book is the Holocaust.

When I pointed this out on Twitter, I received a response from anti-Zionist Jew and founder of ‘Boycott from within’ Ronnie Barkan:

It is a stock response from the Jewish anti-Zionist camp. Telling me, a Zionist, not to mix Zionism with being Jewish. To add insult to injury, Barkan even called me an antisemite. Perhaps this empty rhetoric plays well to antisemites and anti-Israel activists in 2017,  although I find the argument highly offensive. He is, like Suarez, suggesting ‘the only good Jew is a dead Jew’.

In 1931, the census in British Palestine gave a Jewish population of 174,610 Jews. It had increased by just over 100% since 1922. But Zionism was not a success because of Balfour, or the Mandate or the British. Zionism was going to be a success because the underlying concept was so tragically accurate. The antisemitic tsunami that began with pogromic earthquakes in the Pale of Settlement, was to reach such devastating volatility, that European Jewry as a whole would face total annihilation.

In the 1930’s, as the backdrop in Western Europe deteriorated, Jews began to flee. Tens of thousands headed for British Palestine. As they ran from genocide, and with nowhere else to go, the Jewish population in the Mandate doubled again and again in just a few short years. The Arab population resisted the influx of refugees violently, the British capitulated to Arab pressure, and the doors were officially closed on the escaping Jews.

There were four elements at play here. One, the Mandate and the international promise of a ‘Jewish home’. Two, the explosion of violence in the Great Arab revolt. Three, the British plans to severely restrict immigration and four, the tightening grip of Nazi Germany creating the flood of people who wanted to come.  It is in this context, Jewish activity must be seen and evaluated. A context sadly lacking from all modern anti-Zionist revisionist material.

The revisionist narrative, and indeed, the core elements of rabid anti-Israel activism, is all about demonising Zionism. When Suarez penned his book, he searched for any unsavoury imagery, and included it in the final narrative. Jews in British Palestine are not treated as a people, but rather a movement that is judged by the singular actions of the most deviant member. Internal dissent is ignored, individual actions are reflected back on the whole, and the entire contextual history is swept aside. Zionism becomes every bad deed, real or imagined, that can be used to further discredit the struggle for Jewish freedom. Whether a flippant remark picked up in a memo, a misquote or a wandering Rabbi searching for Jewish youth.  There is no quality filter. Anything that can make the Jewish struggle look sinister is included.

Except there is a problem. Who are these Zionists of the 1930’s and 1940’s? These (quoting Barkan) ‘racist, brutal, oppressive and even genocidal’ people?

The answer is simple. In the majority, they were the refugees that managed to escape the Nazis.

From good Jew to evil Zionist

In the world of those like Tom Suarez, what does a Jew have to do, to turn from a captive of the Nazis to genocidal Zionist? He simply has to get out – to live. If he remains within the grasp of Nazi Germany, they will sympathise with him. They can even mourn him, and commemorate the awful tragedy that became him. The Holocaust victim – the good Jew.

Outside of British Palestine, no other nation was willing to take him, and there, in the cauldron of violent Arab opposition to Jewish immigration, the refugee becomes embedded in an additional fight for survival. By 1936 the British already understood partition was likely. By the 1940’s, the Jews were reacting to a growing understanding of what had happened to their brothers, uncles, parents, grandparents in Europe.

But there is no context in the world of the anti-Zionist. If the refugee leaves, if he escapes, he automatically becomes part of the Zionist monster. 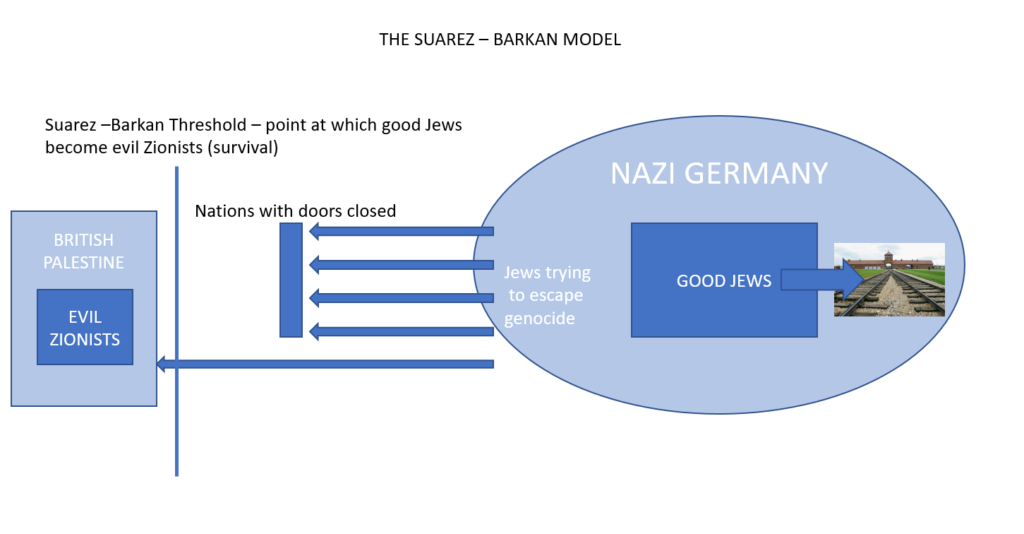 The Suarez Barkan model highlights the problem.  Only in the mind of the anti-Zionist are Jews inside the Nazi empire, Jews escaping the Nazi empire and Jews inside British Palestine not one and the same people. In reality, this family, all reacted in different ways to events occurring to themselves and other parts of the same group of people. To their relatives, their spouses, their children. This context is entirely lost when you engage an anti-Zionist. Look at the tweet from Ronnie Barkan. What exactly separates the Jew he refers to, from the Zionist that Barkan hates? Survival.

Tony Greenstein uses the revisionist formula as a basic pillar of his entire argument. Greenstein spends much of his time, looking for Zionist / Nazi connections and building empty conspiratorial editorials that separate the Zionist from the Jewish whole. Disregarding, just as Suarez does, that most Zionists in Palestine were partial families of Jews from Europe who had escaped. The anti-Zionist separates Jews into good and bad. The dividing line between the two? The Suarez – Barkan threshold. The point an escaping refugee arrives in British Palestine and thus becomes the evil Zionist of the revisionist narrative.

Or in far simpler terms: ‘The only good Jew, is a dead one’. It is worth understanding the message because it underlines almost every argument an anti-Zionist makes. A point no Zionist Jew should ever forget.