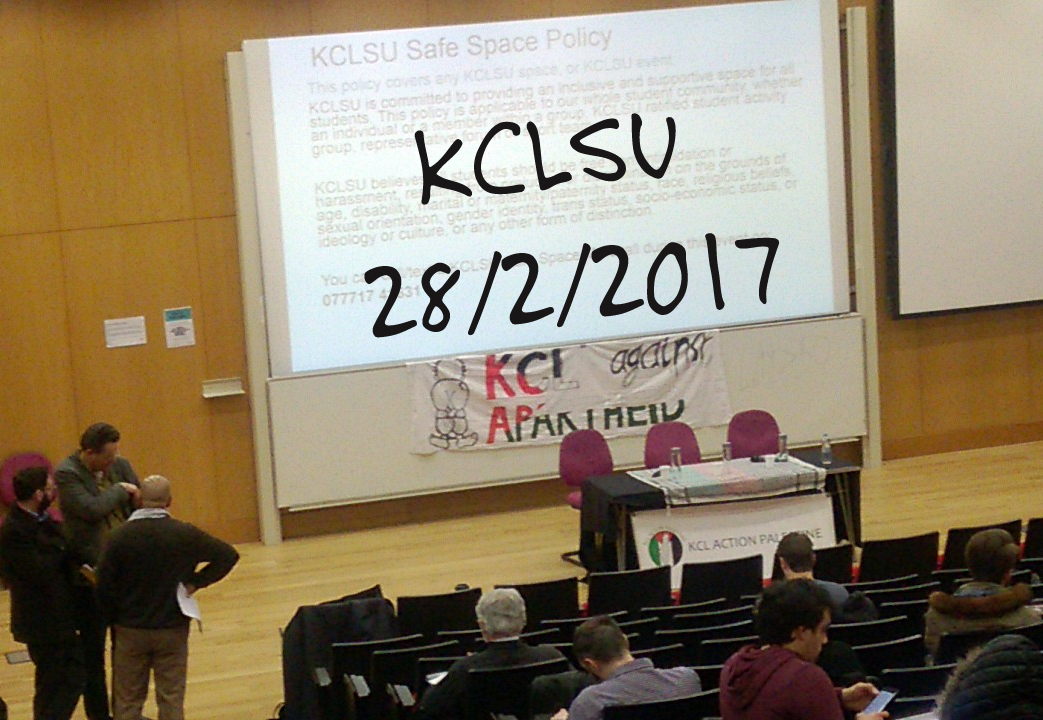 As I was doing my homework for the event at Kings, the information I received all pointed in one direction. All eyes were going to be on Farid Esack, a veteran anti-apartheid activist and Professor from South Africa.

Esack is a man who welcomed his “comrade” plane hijacker Leila Khaled, of the Popular Front for the Liberation of Palestine, at a fund-raiser in 2015.  He also said of the attack in Paris

“”I am not praying for Paris; I am not condemning anyone. Why the hell should I? I had nothing to do with it.. (Then).. I am sickened by the perpetual expectations to condemn. I walk away from your shitty racist and Islamophobic expectations that whenever your chickens come home to roost then I must feign horror.”

This man was on display at a London university. How could I resist?

Given the participants, Kings had apparently refused to permit this to take place on campus. It seems the Student Union stepped in to ‘save the day’.

It was promising to be a big event. KCL Action Palestine Society had changed venue twice, the latest move seemed to be due to demand: 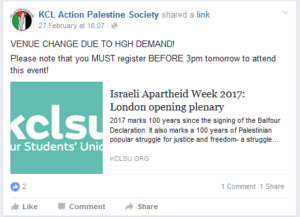 I know they had trouble with the booking system, but the room was perhaps half full. I saw hierarchy from both the BDS Central Committee and the Palestine Solidarity Campaign. As War on Want were co-sponsors, I assume that they were there too. The Jewish ‘Free speech in Israel’ mob, led by the ever eager Naomi Wimborne Idrissi, had a heavy turnout. The Zionist contingent who came to oppose were very well represented.

So just who are these events for? On top of all these groups, it took the PalSocs of Goldsmiths, LSE, SOAS, UCL & Kings, just to make the hall look ‘not empty’. Perhaps the real story beginning to emerge from this week is that of disinterest. Fewer universities, far fewer events and even then, we are seeing semi-empty rooms.

The event started, with the Chair, poet Rafeef Ziadah proudly telling the audience that she was one of the founders of  ‘Aparthied week’. Karma then explained a few ground rules, forbade anyone from filming, and swiftly introduced the first speaker, ‘social justice activist’ and American poet, Aja Monet.

Monet is perfect for the BDS circuit. No real substance. Yesterday, I had seen ‘Mr Slick‘ in operation at UCL. Someone should introduce him to Aja Monet.

This is a punishment hearing, not a trial

People are often surprised at the content of a BDS promoting, Apartheid Week event such as this. Israel was hardly mentioned last  night at Kings. Yes, there were references about oppression, and there was empty rhetoric about how ‘Israeli Apartheid’ is worse than the real Apartheid of South Africa. The speakers also always mention the personal experience of visiting ‘Palestine’. But this is an event for people who already believe Israel is guilty. The talk here is of the right of resistance and the need for solidarity.

Aja Monet is a ‘Black Lives Matter’ activist. And her speech almost sent me to sleep. There was a video, of a few American activists dancing, that she cut off half way because she was clearly losing the crowd. But in general, her message was one of unity, solidarity, resistance and revolution. She verbally acknowledged the theoretical need and justification for violence. As a black American she said she identified with Palestinians and she rambled on about colonisation of the mind and body, intersectionality and why we should all oppose the concept of ‘safe space’.

When Aja Monet gave up the floor at Kings, Farid Esack gave an accomplished speech, a speech delivered with passion, that was on point and tailor made for a BDS audience. Both speakers resorted to analogies to get their points across. Farid spoke of domestic abuse, comparing the Jews to domestic abusers who had been abused themselves. Aja Monet, in refusing to separate violent and non violent resistance, had spoke of the clear necessity of action, if someone’s “foot is on your neck”.

The bucket with a hole

In truth, none of this nonsense I heard at Kings holds up to even the lightest of challenges. Both speakers pushed a narrative of Israeli abuser / Palestinian victim, when the historical reality doesn’t allow for either of their analogies to hold.  With 100 years of terror attacks behind them and with over 20,000 dead Israelis, the Palestinians hardly play the role of the innocent, passive, victim. In neither analogy is their room for rejected peace deals, opportunities spurned, and a denial of the others right to live.

But the real hole in the entire story, the one that nobody ever addresses, is the huge gulf between the utopian secular vision that is sold as the central aim of BDS, and the simple fact that this isn’t actually what the Palestinians want at all. There is no Palestinian movement that isn’t waving the Palestinian flag. Secularism isn’t rampant in Palestinian Society. BDS doesn’t distance itself from groups like FOA that seek religious control. There is not one relevant political faction of Palestinians  that proposes the utopian secular state as a solution. The major player in Palestinian politics is a party of radical Islam. BDS is a fake story, designed for a gullible western audience, that has not one single cornerstone set in place anywhere on the ground in Palestinian society. It is, in short, a con.

Which one is the beast?

Despite having been promised a long time for questions, in the end there was not much time left. But when they came, they brought some action. During the Q&A at Kings, a question was asked by a Jewish student about terror attacks against innocent civilians in Israel. As the questions were taken in batches, Aja Monet was responding to several at the same time. She found cause to speak of Baruch Goldstein. Mentioned the attack and the horror and (rightfully) called him a terrorist. She said this:

“The story of Baruch Goldstein who goes into this mosque and kills 29 people and injures 125. To me that’s a terrorist, you kill people when they are kneeling down to prayer, that is one of the most cruel horrific acts you can do. I don’t know what kind of human being can move in the world and feel justified, if not a terrorist.”

Now compare that comment to the one she gave the Jewish student *just a few seconds later* on her question about violence against Israeli civilians.

“Sister, I don’t even want to answer your question, because at some point, that question is dumb. If people are oppressed. (heckled) I am serious, if people It is not Palestinian’s (heckled), let me finish, it is hatred that kills, it is not people”

Esack was challenged both on his hosting of the terrorist and his refusal to condemn the Paris attacks.  Although I stand on the opposite side of the fence to Farid Esack, he surprised me at the event. It is also true, given reports, I may somehow of missed some of the things he said.

These comments are unusual from someone at a BDS event. Especially in a BDS heartland like Kings Yes, he pushed BDS propaganda and of course his central message is built on lies that we have to oppose, but it would not be accurate to report this event without highlighting these unusual elements of Farid’s contribution.

One other important note. I am aware complaints have been made about some of the comments by the speakers at Kings.  Whenever there was an element of moderation in tone, it was met by silence from the audience. The loudest applause, almost each and every time, was in response to a speaker suggesting violent resistance is understandable. The extremism is already alive and well in the room. These events just feed the hungry.

Then the Kings event was over. I think the most disturbing element of the evening for me, isn’t actually the stream of BDS propaganda. I am virtually immune to that now. What bothers me is the way blacks have surrendered their identity, their suffering, and allowed it to be appropriated by a people that have chosen rejectionism and violence as their default option.

Talking of Israel as Apartheid, renders the very real historical suffering of blacks in South Africa as meaningless. Black South Africans never had a choice, their history is not laden with examples of opportunity that they spurned. There wasn’t a point in history that they chose not to declare their independent state. Black South Africans did not live in equality, with a vote and democratic representation alongside the white man in any part of South Africa. They did not continually attack white South Africa from the outside. Apartheid was a vile regime and it is horrific that this crime is being watered down, rendered meaninglessness, because there are those who see it as politically expedient to tie Apartheid to the Palestinian cause.

Similarly with Aja Monet’s ‘identification’ of the black American struggle with the Palestinian cause. She should be ashamed of how she belittles her people’s own history, their own suffering, by ‘identifying’ with a people that could have chosen to be ‘free’ a long long time ago. We can only guess at the millions of blacks that died as a result of the slave trade, and yet she chooses to tie this to a people who were slaughtering ancient Jewish communities in the 1920’s and violently resisted immigrants escaping the clutches of Nazi Germany.

As Black Americans were fighting for voting rights in the US, Palestinians chose not to declare independence, but rather to limit their violent attacks to the only piece of land being held by the Jews. The entire premise is nauseating. It is like the Jew who suggests Gaza is as bad as the Holocaust. She is the one cheapening ‘black lives’ and the historical , very real, abuse that they have encountered globally. She doesn’t need the ‘white man’ to ‘condition’ her identity, she gives it away for nothing.

Day two completed. Let us see what tonight has in store. Where? I will tell you tomorrow.

One thought on “Kings. Apartheid Week watch day two: Beauty and the beast”