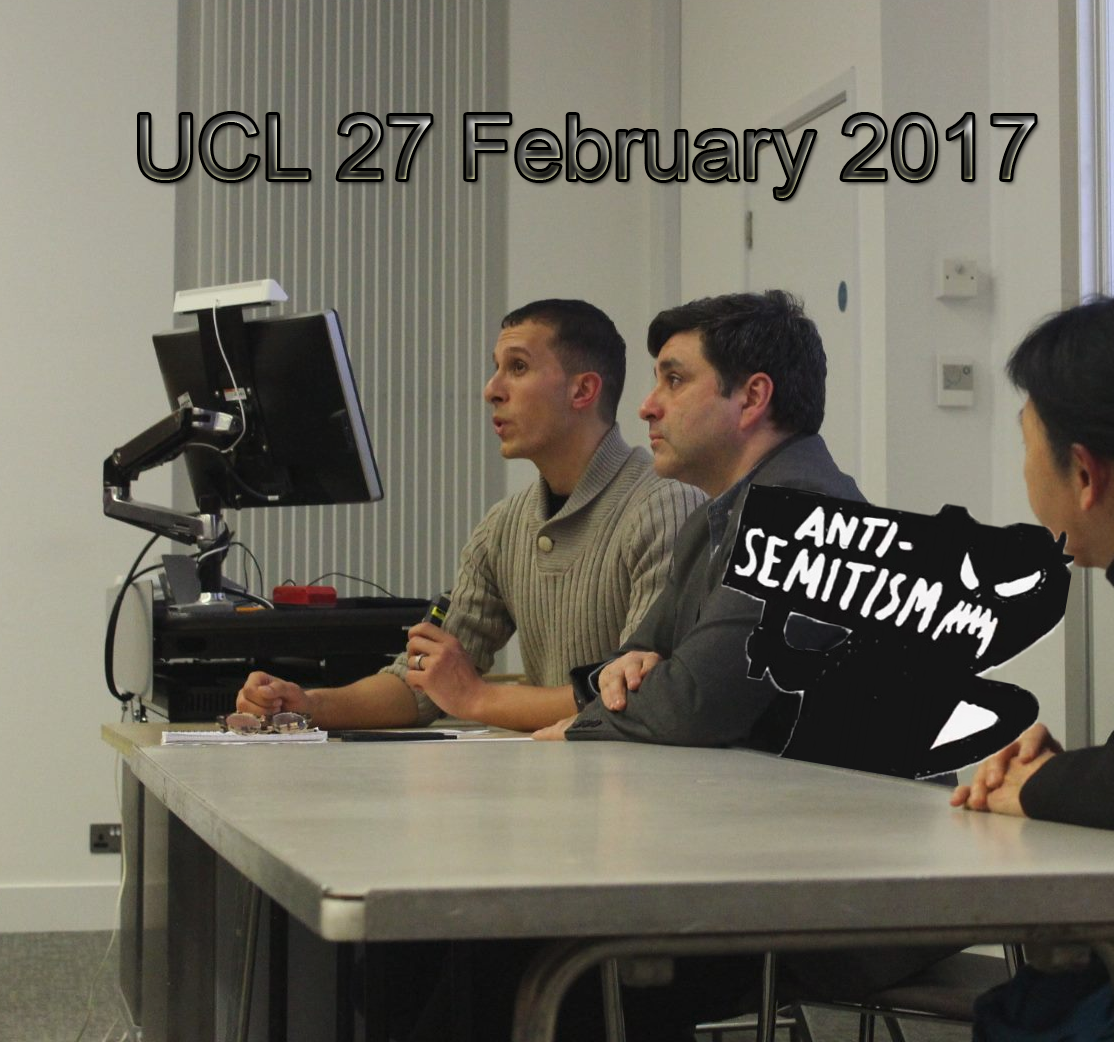 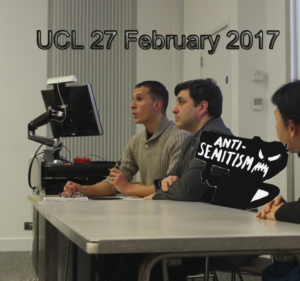 It is Apartheid ‘Week’ again. Last night, 27 Feb 2017 I was at UCL (University College London) for the opening night of UCL’s very own ‘Apartheid Fortnight’ (we were informed that their ‘classy’ week has been ‘doubled’). This event was titled ‘Apartheid: Stories from the Ground‘

The evening was put together by the UCLU Friends of Palestine Society. Which means that the welcoming committee was led by Yahya Abu Seido. A few months ago, Yahya was one of the ringleaders when the protestors tried to ‘no platform’ an Israeli speaker on this campus. In fact, Yahya was caught on camera celebrating what he had believed was the successful closing down of the event. He was part of the group that left the Jewish students locked in a room. Those that left Jewish students needing a police escort to remove them safely. Just a few months later he is happily leading a Jew hating festival on the UCL campus. Another bitter pill that the Jewish UCL students are forced to swallow.

At this event, there were two speakers and a Chair. The Chair was Dr Saladin Meckled-Garcia, the ‘co Director of the UCL institute of Human Rights’. Just in case anyone is foolish enough to believe that a Chair should at least maintain the veneer of impartiality, we can see that Meckled-Garcia has signed petitions against Israel, here, here, here and here. Just for good measure he signed one titled ‘Israel must lose’ in 2009. This ‘impartiality’ was visible throughout the evening, especially in the way the Q&A was handled.

The evening opened with the Chair announcing he wanted to make a political statement. Meckled-Garcia then proceeded to object to the use of the adopted definition of antisemitism for what he suggested was a way of silencing ‘free speech’.  How anybody can address the thugs of the UCLU Friends of Palestine Society about free speech and keep a straight face is beyond me.  At least we were left in no doubt as to which side the Chair was on from the very beginning.

In any event, Meckled-Garica hid behind the tired argument that because people like Ilan Pappe exist, demonising Israel is not antisemitism. This absurd logic glorifies Israeli outliers, argues they are in fact, part of the norm, and then uses them as cover to attack the Jewish state. We could do the same to those in the UK who believe they have been taken aboard an alien spaceship. We can reward their experience with academic positions in our universities, and then attack anyone who hasn’t yet seen the truth of their abductions.

The ‘forgetful’ doctor at UCL

The first speaker was Dr Swee Ang Chai, author of ‘From Beirut to Jerusalem’. Dr Swee described herself as a Christian, who grew up as a strong supporter of Israel. In some ways, you can understand Swee Ang Chai’s story. She saw conflict on TV, rushed as a medical practitioner to assist the wounded, and ended up sympathising with the victims of war that she treated. Given the very real horrors that I am sure she has witnessed, I have little doubt her passion is genuine. This much I understand.

What I neither understand, nor forgive is the one sided, propaganda machine this Doctor has turned herself into. She spoke almost exclusively about the horror of Sabra and Shatila, showing slide after slide of vivid images of the wounded, images that were clearly designed to shock. Yet she failed to mention at any point that it wasn’t the Israelis who committed the massacre. This completely skews the message.

This appears to be a habit of the good doctor’s. In 2014, Richard Millet wrote a piece about Swee Ang Chai in which he found her guilty of the same distortion. In fact when she was directly questioned on her inability to name the group that actually committed the massacre, she lost herself inside a conspiracy tale.

The second speaker was part of the modern slick Palestinian propaganda machine. Well presented, well spoken and speaking the universal language of ‘peace’. Just like the BDS movement Abed Salayma presents himself as ‘non violent’.  Just like BDS, Salayma verbally legitimises the use of violence in the same sentence as he suggests he is non-violent.

Salayma’s talk was full of the distortions that are so typical of these events. Error, distortion, error, distortion. At one point Salayma had the words ‘1929 massacre’ written on one of his slides. He did this to mention how during a massacre of Jews, Arab families had saved many Jews from the killings. At no point did he mention that the Arabs were also doing the killing. The 1929 Hebron massacre was delivered to these students as a positive message about the Arab treatment of Jews.

It is impossible to write a comprehensive report of every lie that was told at this UCL event. They came far too quickly. Each sentence contained another name, another event, another distortion. Both the Doctor and Mr Slick were relentless. This wasn’t an evening of information, this was part of a well-oiled system designed to turn terrorist in to victim and victim into terrorist.

The question and answer session began and the first question came from Jonathan Hoffman and was directed towards Dr Swee Ang Chai. It was at this point Hoffman informed the audience that the doctor had distributed a David Duke video to friends and colleagues. A video entitled ‘CNN Goldman Sachs & the Zio Matrix’.   She had done so along with a note to say:

“This is a shocking video please watch. This is not about Palestine – it is about all of us!”

As Hoffman read out the horrifying contents of this video, members of the UCL audience actually laughed. This connection between the neo-Nazis and anti-Israel activism is rock solid.  During the exchange between the Doctor and Jonathan Hoffman, alongside her apology, the Doctor said of the video:

“I don’t think it is entirely anti-Jewish”

Imagine for one moment this scenario:

Somebody posts a racist Klu Klux Klan video pushing vile stereotypical racist slurs about blacks. The person involved would not easily be forgiven by anyone on the left. Certainly not have the accusation ‘laughed at’ when read out by a black member of an audience. Now imagine that what this person did for a career, was sell a greatly distorted vision about events concerning Africans. Demonising them through the use of carefully selected images, distorted stories, missing facts and maps that lie. Would anybody fail to join the dots?

There was a question that dealt with the lack of context provided by Abed Salayma during his talk. Israeli kill, Palestinians die. ‘There is no conflict’ Salayma insisted, no conflict at all. This is ‘oppression’ and the ‘oppressed’.

This was followed by a Jewish South African who is both too young and too galactically stupid to know what Apartheid looks like. He received applause by suggesting the context is oppression too. And when you oppress, ‘bad things happen’. I suppose he is referring to bus bombs, mall attacks, exploding cafes, slaughters at Seder nights and so on. The real historical suffering of Black South Africans under the Apartheid regime is belittled every single time one of these simpletons opens their mouths.

Then it was over. It is going to be a difficult week, fortnight, month.

Jew hatred is accommodated in a way no other hatred is.  Students with a Jew hating fetish, gathered at UCL to enjoy the annual ritual. The crowd, raised in rapture as they received their ‘fix’. Jew hatred is being permitted to publicly mutate and grow on campus. This won’t end nicely.