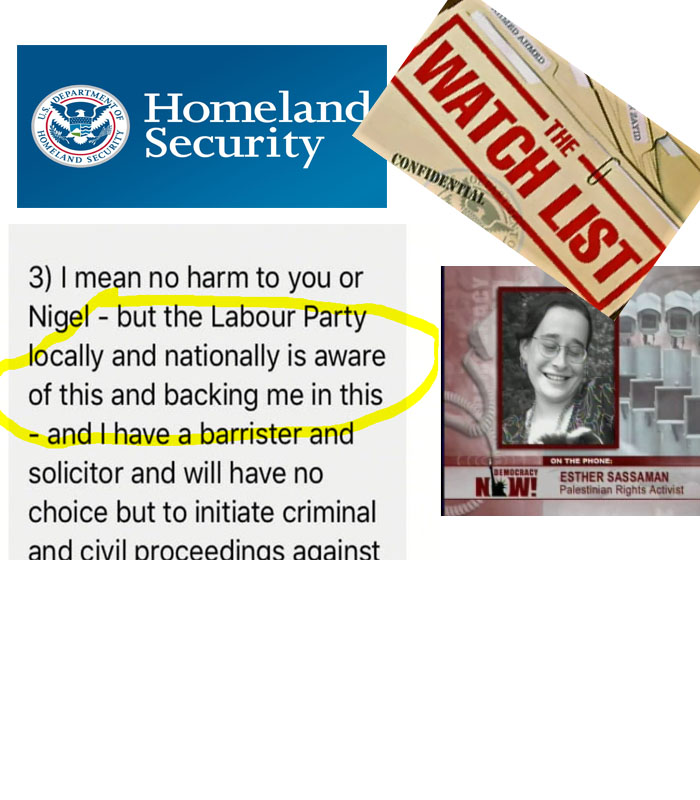 Labour Councillor Margaret Corvid’s antisemitism was exposed on this website just a few days ago. It doesn’t get much more blatant that supporting the antisemitic play ‘Perdition’ or suggesting ‘Zionists control the Holocaust narrative’. Corvid acts as a Councillor in Plymouth and since the news broke, Corvid has been suspended from her role. Since the suspension she has publicly given some details that only cloud the matter further.

Corvid’s Labour party membership came as a result of Jeremy Corbyn’s leadership election victory. My research has exposed many antisemitic extremists, white supremacists, Holocaust deniers and other disenfranchised elements of society who jumped into the Labour Party for Jeremy Corbyn. Corvid is another one of those. Corvid openly describes herself as ‘hard-left’ and says she has been a ‘Trotskyist’ since she was sixteen years old, In an early Stateside interview with Galloway she spoke up the value of the ‘red-green alliance’, seeking advice from Galloway about how to create a prosperous alliance in the United States, similar to the one Galloway had created in his far-left Respect Party.

In that interview Corvid openly praised ‘symbolic gestures’ and the ‘cultural currency’ of radical Islamist Iranians handing over the Israeli embassy to the PLO – and their renaming the street of the British Embassy after an IRA terrorist. When she arrived in Scotland, she naturally gravitated towards the Socialist Workers Party.

Corvid claims in her apology that she does not hold these views anymore. I am not sure how true this is. Corvid has an issue with her memory. In fact she says she did not remember the Perdition episode at all. That would be astonishing. It was an event in her life that embroiled her in masses of unwanted publicity. She was forced to resign from the local solidarity campaign. It is fair to believe that it may have been behind one of the times she changed her name. It may be the reason she left Scotland. Yet she does not remember it?

The amnesia spreads far. When being interviewed by the Daily Mail in March 2017, she tells the reporter she moved to Plymouth from the US ‘eleven years before’. This would make that move in 2006. Which would be odd since she lived in Scotland in 2007 when the Perdition row occurred. She was an activist for the SNP as late as 2009. Maybe she just completely forgot she went to Scotland at all.

Which makes me doubt her current ‘opinion’ story too. Whilst canvassing for election to be councillor in early 2018, she apparently became engaged in an argument with a British Zionist Jew. Eventually the person she was standing alongside, another potential councillor seeking election, needed to hold her back and calm her down because she was ‘ranting about anti-Zionism’.

A councillor On the Homeland Security watchlist

So it is no surprise to learn that authorities in the United States knew of her before she came. In fact Corvid herself, in an on air interview, admits to having been on the ‘Homeland Security‘ watchlist, who in her words, considered her to be a ‘terrorist’. See this clip for evidence of that exchange:

The Plymouth Councillor was on the US watchlist from a department set up ‘to secure the nation from threats’. In Corbyn’s Labour she became a representative of the people. These are the type of people Corbyn has attracted to his Labour Party. This is not a one-off. Yesterday, Investigative Journalist Iggy Ostanin published footage of Jeremy Corbyn advisor Andrew Murray expressing sympathy and solidarity with forces fighting against NATO. Later the same day, footage emerged of Corbyn himself, calling NATO ‘a danger to world peace and a danger to world security’. This is a dangerous anti-western mindset that poses a danger to all of us.

It gets even more troubling. When I was doing research for my initial piece, I found that some people had publicly contacted Corvid making the accusation she was a terrorist sympathiser and antisemite. Corvid responded with threats. She told the accuser that the ‘Labour Party is aware’ and if they didn’t stop making the accusations, she or they (the message is not clear) will take legal action. Publicly she called people who approached her over antisemitism – ‘trolls’. Whatever else is in this message – the threatening tone is clear and Corvid is explicitly saying that by this point – the Labour Party knew about her antisemitic actions and her extremism and were ‘backing her’: 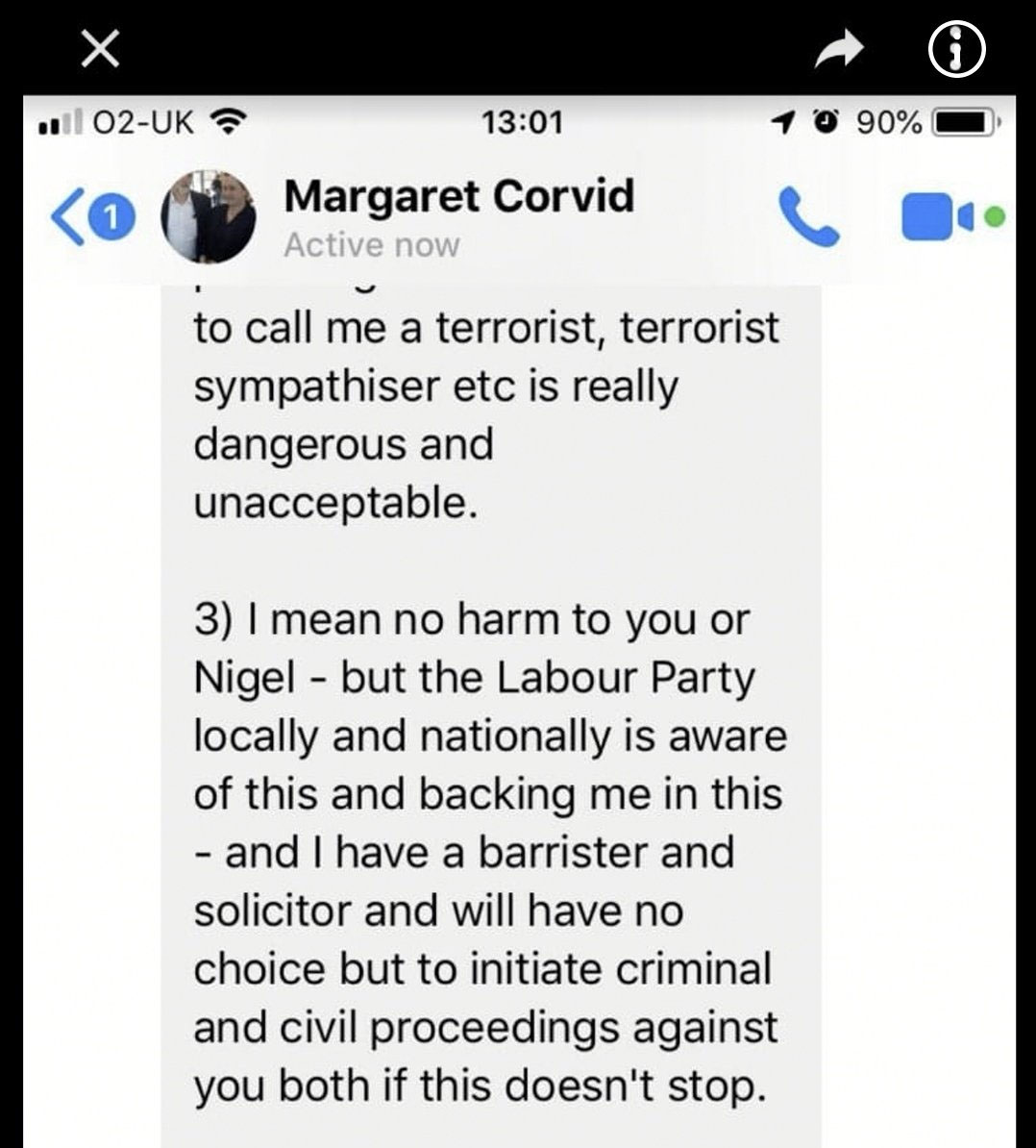 So, who knew she was an extremist and had promoted the play Perdition? Local Labour leader Tudor Evans was tagged into tweets on the subject of Margaret the extremist Councillor in March 2019, but it goes back even further. In Corvid’s recent statement she is explicit. She says this: ‘I reported them to Deputy Council Leader Pete Smith and Chief Whip Eddie Rennie in November 2018 in a face to face meeting.’ she goes on to say she has ‘kept them informed’. Which means we need to ask Pete Smith and Eddie Rennie why action wasn’t take against Margaret Corvid until my research in this blog exposed the story?

This is the problem with Labour and antisemitism. Every single time. Why does it need us to drag them screaming before they take action?

Councillor Corvid posed with Corbyn. I have lost count of the number of people in antisemitism scandals that I have seen in selfies with Jeremy Corbyn. I was told Corvid played an important part of Luke Pollard’s re-election campaign. This has to be after the party already knew about the problems with her. 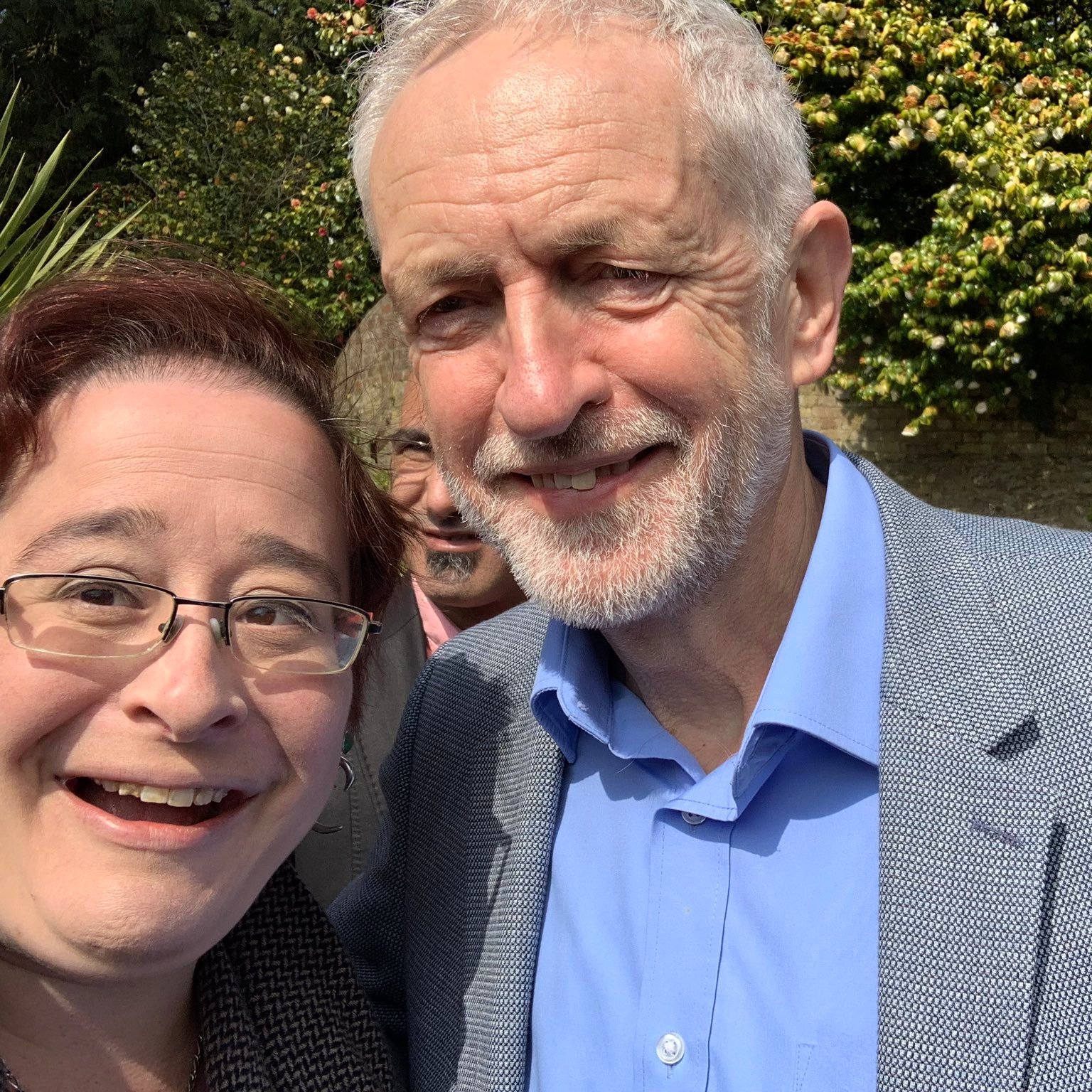 And then there is the local media. I am an investigative journalist. Corvid was elected to represent the people of Plymouth. How is nobody performing the most basic of checks on their own representatives? It isn’t like nobody knew who Margaret Corvid was. In fact, she is something of a celebrity in Plymouth. I have found four seperate female journalists who promote Corvid as something of a role model. The first was Katie French. Katie worked in Plymouth but was also working for the Mail. So Corvid gets plugged in the Daily Mail.  Corvid’s election was in 2018, so no doubt this celebrity status did her no harm.

Worse still, in March 2018, the local newspapers put together a list of ’70 of the most inspiring women in Devon.’ This was just two months before the May election. For whatever reason, Rachael Dodd and Anita Merritt listed Corvid as one of the inspiring women for International Women’s Day. That certainly didn’t do her case for election any harm. A year later, in the local ‘Plymouth Live ‘Katie Timms listed Corvid as one of ‘the most incredible Plymouth women’.

Katie French, Rachael Dodd, Anita Merritt and Katie Timms. It took me 10 minutes to realise there was a problem with Corvid’s backstory. Not one of these people even bothered to check the history of Margaret Corvid – of their local councillor – even as they strengthened her chances of election or promoted her as a role model.  At one point Margaret Corvid was apparently considered a ‘terrorist’ by US Homeland Security.

I live a long way from Plymouth and Corvid didn”t escape my attention. So my question to these ‘journalists’ (and I use the term loosely) is how did she escape theirs?

92 thoughts on “Labour Party Councillor was on Homeland Security watchlist”