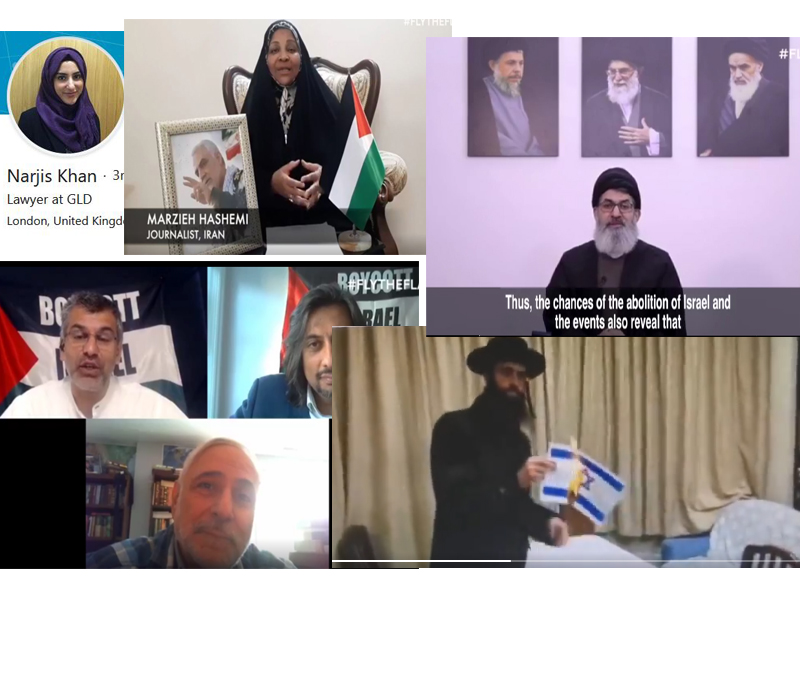 The IHRC Al Quds Day 2020 was like no other. If you doubt that the BDS movement supports violence, seeks to destroy Israel and wants to rid the Middle East of Jews, then you should sit through the whole toxic 150 minutes of this online event like I did.

Each year, the Islamic Human Rights Commission (IHRC) are given permission to hold a radical Islamist event calling for the destruction of Israel as they wave their flags through the streets of London. They play a game in which they wave their extremism in our faces and laugh at the foolishness of those that permit them to recruit on our streets.

It is a pro-Hezbollah, radical Islamist event, that until the terrorist organisation was proscribed in the UK, would regularly see the flag of Hezbollah proudly on display.

Al Quds 2020 was different because it was online. There were no police to monitor their words. Instead the IHRC were allowed to invite whomever they liked and freely speak their mind. Before any British Government official ever gives these terrorist supporters another chance to walk through London – they should be forced to watch this event.

Because of the importance of some of the content, I am not going to write up every speaker – but rather focus on those I believe need special attention. However, given some of what occurred it is important to remember the names of all those who participated.

The IHRC video you have to see

According to his introduction, Mohammad Al Asi has been banned from the UK because of his extremism. During his speech Al Asi spoke about the fact that most Jews would need to be ethnically cleansed after the resistance successfully destroys Israel. Bringing back shadows of the Holocaust, Al Asi mentioned the need to ‘separate’ the Jews into groups – those that might be allowed to stay, and those that would need to be forced (violently) to withdraw (face expulsion). Just as he began to talk about ‘dezionising elites’, he ran out of time:

After 2 hours and 20 minutes Nazim Ali introduces an ‘accomplished poet’ by the name of Narjis Khan. The poem she recites is an anti-Israel, anti-western rant – in rhyme. During the poem Khan comments that  ‘Palestine’ teaches ‘the meaning of resistance,’ and apparently refers to all resistance (she does not differentiate) as ‘self-defence’. 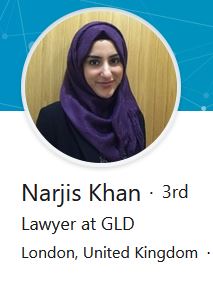 Khan also has a blog on the IHRC website. Her most recent contribution appears to be an eulogy to Qasem Soleimani the Iranian General killed in a targeted US strike. Soleimani was head of the Revolutionary Guards’ Quds Force and responsible for bloodshed throughout the region, often through terrorist proxies.

All this is bad enough. Participating in an event alongside rabid extremists that call for Israel’s destruction and writing poems for a man who helped sponsor terrorism throughout the Middle East. But aside from being a poet, Narjis Khan is also a lawyer who works for the Government Legal Department (GLD).

The Government Legal Department are the government’s principal legal advisers. Their core purpose ‘is to help the government to govern well, within the rule of law.’

It is surely beyond all logical reasoning to accept that ANY government employee in ANY government department should in ANY way be associated with the radical Iranian Islamist Al Quds day – and an event that also contains leading members of Kataib Hezbollah.

When they do not need to worry about whether their speakers will be allowed into the country, the IHRC can create a wish list of who they would really want speaking at their annual events. This freedom allowed them to present Hashem Al Haydari, who is listed as the Deputy Commander of Kataib Hezbollah.

The United States consider Kataib Hezbollah a terrorist organisation. They are part of the Iranian attempt to destabilise the region (in their case Iraq) and operated for Soleimani’s Quds force. Their commander was recently killed by a US strike: 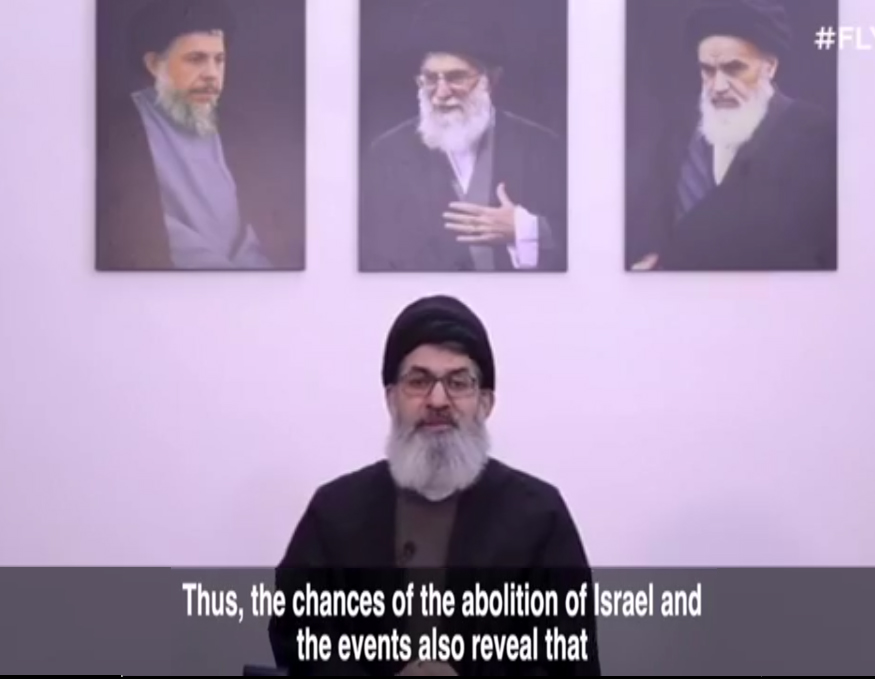 The love for Soleimani

The love for Soleimani was visible everywhere. This is an image from the speech of Marzieh Hashemi, the Press TV Journalist. Notice the photo on the desk (not that you could miss it): 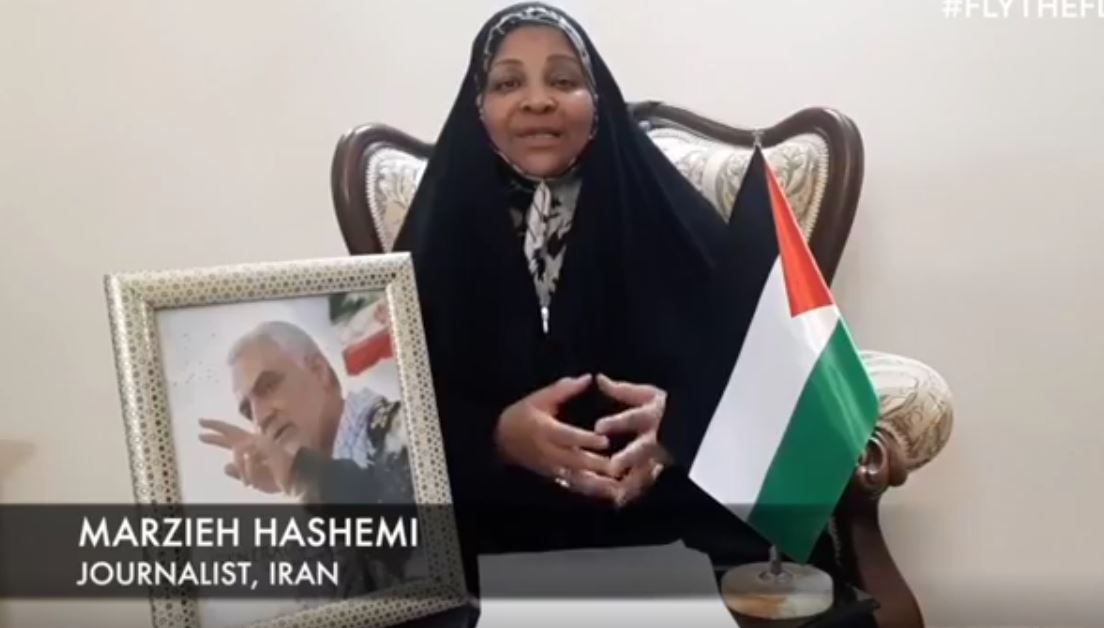 IHRC award for the absolute Turkey voting for Christmas

The award for the absolute Turkey voting for Christmas, goes to Reverend Daniel Burton and Burton certainly has got some explaining to do. Al Quds day is a perfect example of the Marxist-Islamist alliance in action. Radical extremists uniting together for a common cause – the total destruction of the state of Israel.

For Jews to see any Christian associated with this is a sickening experience. Just where on earth does Daniel Burton think he fits into their plans? Burton is a useful turkey in that he legitimises this radical hatred and allows the event hosts to claim ‘Christian participation’. What an absolute fool.

I strongly advise that people contact the Church of England and raise questions over this participation. What is the Church doing sharing a platform with these people? Is the Church really in bed with Soleimani and Kataib Hezbollah?

There is no surprise that Napier spoke, he always speaks at the annual IHRC event. Napier runs the Scottish Palestine Solidarity Campaign, an organisation shown to contain high levels of hard-core antisemitism.

During his speech Napier actually said this:

“we are inspired by Palestinian resistance in all its forms”

‘All its forms’ sends a clear and unequivocal message. Take the Suicide Attack at the Park Hotel. Elderly Jews gathering together for the Passover meal were slaughtered in a suicide attack. Thirty civilians were killed in the attack and 140 were injured. Hamas claimed responsibility. It is known as the Passover Massacre. 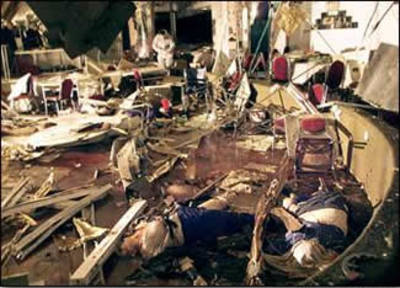 According to Mick Napier, this type of action ‘inspires’ him. Does anyone in the Scottish Parliament still associate with this extremist?

Keep terrorist supporters off our streets

Each speaker in turn pushed some type of message legitimising the call for the destruction of Israel. Some were explicit – some less so. The Neturie Karta burned an Israel flag.

Love for terrorism and terrorists was clearly on display and with the freedom to invite any speaker they chose – the IHRC brought in Soleimani supporters.

But an average of only 300-320 people watched this international event online. At its peak I think the number was 360.

How can the government justify giving them an audience of 10,000s? Given the evidence of extremism and support for terrorism – we can clearly demand that this toxic group are not allowed to walk through London’s streets any more.