Margaret Corvid is a Labour Party Councillor in Plymouth. She is extremely active and appears to play an important part of Luke Pollard’s re-election campaign. Margaret’s Facebook and Twitter are full of pro-Corbyn material and she is always on the street canvassing. She made over 400 tweets / retweets in just the last few weeks:

Oddly, Corvid’s Facebook friends list includes high profile players in the antisemitism row such as Tony Greenstein and Jackie Walker. Interestingly Mick Napier, the head of the Scottish Palestine Solidarity Campaign is in there too. Why would a local councillor in Plymouth be associated with a vile antisemitic group in Scotland?

It is because Margaret Corvid has not been using that name for long.

I could find no active record for Margaret Corvid before 2013. She admits in an article it is her ‘professional name‘. What I did find was a political activist in Scotland named Esther Sassaman. Here is one of her tweets:

Sassaman first appears in early 2003 with a blog about an upcoming visit to ‘Palestine’. She is American, defines herself as ‘ethnically Jewish but drawn to the black Baptist Christians’. She joined their Gospel Choir. It seems as if she was an anti-Israel ‘fanatic’ before she ever stepped foot there (she described herself as a ‘fanatic’ – Rachel Corrie was her inspiration).

Upon her return she continued with political activism. She even meets and interviews George Galloway during his visit to the States in 2005. Coincidence or not, within 7 months, Sassaman would surface as an activist in Galloway’s home town of Dundee.

Sassaman appears to have platformed with former Guantanamo Bay resident Moazzim Begg in 2006. At that point she was described as an ‘American’ resident in Scotland.

Sassaman came to public attention in Scotland during a row over the play Perdition, Perdition is a well-known antisemitic play. The play attempts to suggest that the Zionists needed Jewish corpses to raise more sympathy – and the Nazis begrudgingly obliged by destroying Hungarian Jewry. Thus the Jews become responsible, in no small part, for the Holocaust. It is a spectacularly twisted form of Holocaust denial – yes it may have happened, but it was the Jews fault.

The play was shown in Scotland by the SPSC. Incredibly (although not for those who know them) the SPSC decided it was fitting to run this during Holocaust Memorial Day.

Sassaman had a problem. She was highly active in the SWP and the association with Perdition on HMD was making for bad publicity. Apparently, they forced her to resign her position in the SPSC. But Sassaman would not go quietly – she said that despite the resignation she ‘supported’ Perdition claiming it had an ‘important story to tell’. She wrote this in her resignation letter: 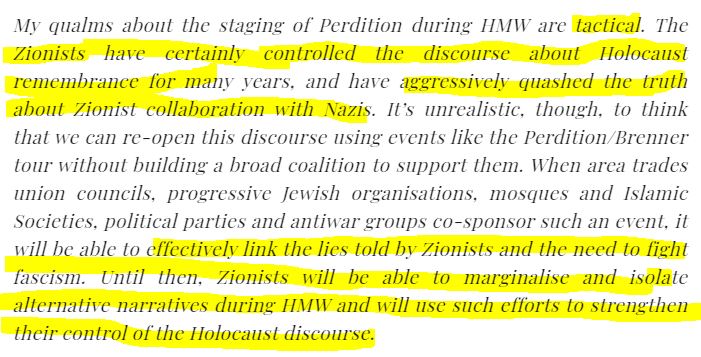 “My qualms about the staging of Perdition during HMW are tactical. The Zionists have certainly controlled the discourse about Holocaust remembrance for many years, and have aggressively quashed the truth about Zionist collaboration with Nazis. ….. Until then, Zionists will be able to marginalise and isolate alternative narratives during HMW and will use such efforts to strengthen their control of the Holocaust discourse.“

By 2009 Sassaman was active as ‘Campaign Coordinator’, Glasgow North East for the Scottish National Party. 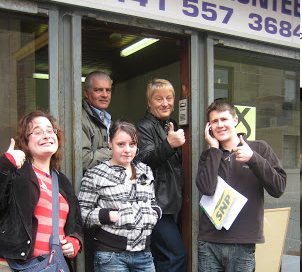 At some point after 2009, Perdition supporting Sassaman was left behind. She married and became Esther Owen. She divorced and headed for the south coast. It was there she became Margaret Corvid. She is now a Labour Party Councillor working for an institutionally antisemitic party, trying to get Jeremy Corbyn – and more locally – Luke Pollard, elected. ‘Zionists controlled the discourse of the Holocaust’. How on earth is she still inside the party?

I engage in deep undercover research into anti-Jewish hatred, anti-Zionism and anti-western extremism. Your support really does make all this possible. The work is fully independent, and I uncovered many stories on this site that created headline news across the globe. I was recently named as one of the J100 (‘top 100 people positively influencing Jewish life’) by The Algemeiner.  If you can, please consider making a donation towards the research.

95 thoughts on “Perdition and Margaret Corvid, the Labour councillor from Plymouth”