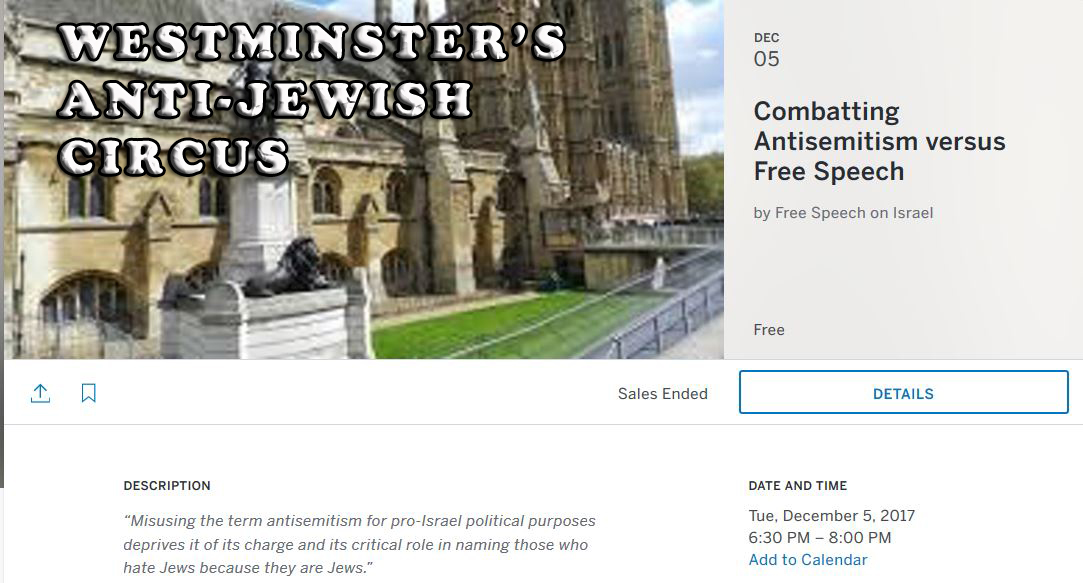 Last week an event was held in Westminster, that is alleged to have deliberately excluded Jewish members from attending.  My own ticket was cancelled due to an overbooking, yet I later managed to get a place booked with a non-Jewish name. Some Jews who turned up were refused entry at the door, despite there being empty seats in the committee room. That particular event was hosted by MP Tommy Sheppard and complaints over the anti-Jewish racism have been lodged with the Office of the Parliamentary Commissioner for Standards. Last night, another anti-Jewish event was held inside Westminster. It was also hosted by Tommy Sheppard.

Now some will protest and suggest that this latest event wasn’t an anti-Jewish event at all, but rather one that simply wanted to promote ‘Free speech on Israel’. Except when the matter is looked at closely, it quickly becomes apparent that what is occurring in Westminster is unacceptable racism against Jews.

Can you imagine a group calling themselves ‘Free speech on Africa’, holding a panel event in Westminster that suggests that not only is almost all racism imaginary, not only is the rise in racism deliberately manipulated by blacks for political gain, but blacks themselves are responsible for the racism they experience? In fact, the meeting would go as far as saying that the real victims of anti-black racism weren’t even blacks, but rather those who try to harm them.

There are so many blatant angles of racism within that example. Accusations of a strategy of manipulation and deceit being applied to an ethnic, racial or religious group, as if they form a unity in which such a cohesive conspiracy could exist.

Well this idea of a ‘plot’ is receiving legitimacy inside Westminster. And once again, the devilish race being blamed for all manner of ills are the Jews.

Free Speech on Israel and antisemitism.

Naomi Wimborne-Idrissi will inform you it is not Jews, but just Zionists that are the ‘devilish clan’. She suggested at the event, she abhors real antisemitism, and fights it whenever she can. Except this is simply not true. I produced two reports in 2017 about antisemitism inside anti-Israel activist groups, one about the PSC, the other about the Scottish sister ship, the SPSC. In both I spent much time ensuring all criticism of Israel was removed from the examples of antisemitism I put forward. In the end, almost all that was left, were examples of anti-Israel activists sharing material from white supremacy websites in the United States.

The Free Speech on Israel event.

Inside the event in committee room 12, there were sixty five people. Tommy Sheppard opened the event by suggesting he felt the need to give a platform to an argument that receives little airtime. Clearly Tommy is not aware that scores of events occur in the UK monthly that support anti-Israel activism, and the only difficult in freely speaking about Israel that exists, is experienced by those that support the Jewish state.  I wonder if he has seen the report into the SPSC, that suggests whenever the SPSC flag is raised in Scotland, between 40-50% of the demonstrators have shared white-supremacist material?

Wimborne-Idrissi then introduced herself as chair, pushing the same line, that this discussion over attacking Israel is stifled. She suggested they cannot receive ‘any sort of platform’, despite having been given the floor twice at the Labour Party Conference.  She continued to go on about how false accusations of antisemitism are deflecting attention away from the real sufferers, who are the Muslims. People who now face a ‘wave of bigotry’. This ‘don’t worry about the Jews, worry about the Muslims’ message was repeated by different members of the panel.

Shlaim, the artist and Gordon

Then came the three speakers. Avi Shlaim – who is now just a foolish old man lost in his own intellectual redundancy – spoke first, going on to suggest the evidence of antisemitism in Labour is ‘extremely flimsy’. This despite 1000’s of legitimate complaints being received by the party. He suggested the crisis is ‘manufactured’ and proposed that we should spend our time fighting the real problem which is ‘Xenophobia and Islamophobia’. Shlaim as he always does, mentioned the pre-war anti-Zionists in Europe, yet once again forgot to remind the audience what happened to them all. His line of argument is sickening. In truth the Bundists were tragically wrong – they thought Europe was safe and burnt in Auschwitz. The reality is, that had Israel been created in 1938 and not 1948 many Jews could have been saved.

On the panel was an artist, who spoke second and gave a meaningless talk, before Israeli academic Neve Gordon took the floor. When Gordon spoke he was clearly out of his depth, speaking in Israeli terms, about an Israeli based contextual argument, that has no relevance in the current global battle against the antisemitic forces in anti-Zionist activism. Gordon simply does not have a clue about any of the societal struggles taking place in Europe. Gordon spoke in intellectual but irrelevant prose, following the typical and overused line of the hard left, in suggesting all the antisemitism is on the right. An argument totally devoid of historical reasoning. Early 20th century antisemitism came from both the right and the left.

Which is why the use of a handful of Jews to attack the vast majority of Jews is nothing new. After the 1917 revolution, the Soviets did it expertly using the ‘Yevsektsiya‘. And this is all the meeting was – a circus that was performed to add legitimacy to the position of the antisemites. Of the sixty-five people present, the vast majority of Jews were Zionists and the vast majority of opposition were not Jewish, but rather ‘haters’. People who are using the ‘useful idiots’ to provide a platform for hate. Sandra Watfa was there. Elleanne Green was there. Timothy Horgan was there. Even Tom Suarez, who wrote a book which entirely butchered history and demonised Jews, was there. Jenny Tonge was there. Others too, non Jewish, recognisable faces from the anti-Israel activist groups.

It was a hate event, a Marxist antisemitic circus, taking place inside the British Democratic Estate. The Zionists were there in force, to play their part, and oppose, and object and feel persecuted. And all the while Idrissi smirked and felt empowered. The Q&A passed as it always would, with Idrissi ensuring that the few anti-Zionist hands that were raised, were given statistical preference. A few Jews complained about antisemitism – the panel agreed that antisemitism is terrible – but continually suggested that there is none of it on the left. The curtain came down. The circus will move to the next venue now.

However Tommy Shepherd seeks to justify himself, his decision making is built on naivety, ignorance, a failure to understand history or antisemitism, and he places it all on top of an greatly oversized opinion of the depth of anti-Zionist Jewry. So a final message just for him:

A message for Tommy Sheppard

Tommy – you wouldn’t attack the identity of 93% of Muslims, Blacks, Christians or any other group, so I am unsure why have you picked up the political axe to use specifically against the Jews. Inside that room were people who use the hashtag #jewnitedstates and several others who share white supremacy material. There was a man who wrote a book that suggested Jews sold their family members to the Holocaust. There was someone who spends his time publicly stalking Jews like me, and for that reason he was on the door and able to identify every Jew by name as they walked in.

You need to look at the report into the SPSC to understand the undeniable antisemitism being uncovered, and then ask yourself why the group who ran this event deflected attention from its findings. And finally you need to research history, and learn how the Soviets attacked their Jews – through the use of a tiny minority of Marxist Jews – people without religious or nationalist Jewish ties – using them to begin the brutal persecution of millions.

And then you need to reflect on what you are doing. You sat in a room that attacked 93% of UK Jews and somehow felt you were doing the right thing. You may not be able to see the hate, but the Jews saw it. They felt it the moment they stepped inside Westminster. The building that is meant to make us feel secure, is becoming increasingly more menacing. Thank you for your part in that.