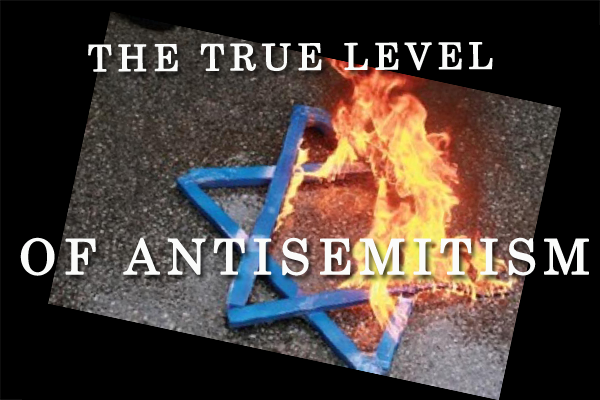 The true level of antisemitism 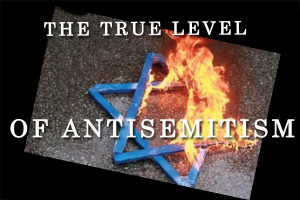 I recently responded to a post on a friend’s Facebook page regarding the current security threat in Europe. This is something I do not do very often, Facebook is inherently a ‘family affair’, which means arguing on someone’s personal page, rather than in a dedicated group setting, is like arguing in their lounge. I know many cast this aside, but it is my personal thing, a self-imposed online etiquette.

The article had criticised the ‘overstating’ of the Jihadi threat in a piece of what was clearly gutter journalism. The first response congratulated the poster on placing the article, by the third comment, this same person had mentioned Rothschild, by the fourth, global conspiracy theories. When I teasingly asked for evidence I was handed the oft cited ‘Project for the New American Century’; a think tank document from prior to 9/11 frequently referenced by conspiracy theorists.

Whether he is aware of it or not, I had encountered an antisemite, a person that unable to handle the organised chaos in which he lives, chooses to imagine puppeteers, invariably Jewish ones, forming the world to a shape of their choosing. By extension the Jew becomes an invisible and insidious enemy, one to be reviled, outed and punished.

However, there are other dimensions to this. I believe others in the exchange considered him merely a fruitcake, not recognising the very antisemitism that had just set me apart from the world. In writing those words, he had said to me that I am an insidious enemy of humanity and I need to be rejected.

Each of us react in different ways to such events. Some stand up and shout, others hold their feelings back, some because of the frequency, barely notice anymore. Then there are many who recognise it as antisemitism, but of the inevitable and bearable kind. Whichever way you react, there is nobody keeping score of such occurrences. What would have been clearly racist if the word ‘black’ was used, suddenly becomes something I am meant to accept by default.

This of course is not the ‘worst antisemitism’ I have experienced here; it was no more than a minor ‘non-event’. I have been physically assaulted, had swastikas sprayed on my window and had my car vandalised. I am not identifiable as a Jew on the street, so the attacks against me tend to happen closer to home where elements of my lifestyle (Shabbat candles, chanukiah, mezuzah) give away my Jewishness.

People who do not even verbally identify as Jewish are blissfully unaware of the terrain in which an openly Jewish person walks; for them, antisemitism is a rare act of violence that happens to a Hassidic boy as he walks down the street in an overtly Jewish area. It becomes possible therefore to escape modern antisemitism, either by not identifying as a Jew or by becoming an ‘enlightened Jew’ (through attacking what is precious to other Jews – being openly hostile to the religion or Israel).

Thus through comparing the new antisemitism to Nazi racial policies that gave no route of escape, modern antisemitism, becomes viewed as a troublesome but minor form of racism, a view strengthened by statistics from anti-hate groups. It is against this measure that antisemitism in the UK in 2015 is defined as problematic, but ‘under control’. Although nobody would dare to use the lack of slavery as a measure through which to suggest anti-black racism is not an issue in contemporary society, this is precisely the type of gauge used to classify the current level of antisemitism. ‘Things are not what they were’ they say, pointing to the current non-existence of a European Auschwitz as evidence. All this of course supported vocally by a minority of Jews who have no idea what it is like to engage the world as a ‘bad Jew’ (someone who is openly Jewish and/or identifies with Israel).

Yet there exists a gulf between how antisemitism is perceived and the reality of being Jewish today. My two children were born in Israel. To keep them safe, how could I send them anywhere but to a faith school? This isn’t a statistic that is going to be reflected in antisemitic reports, it is a fact on the ground generated by the reality of the world in which we live. I do of course have a choice, I can always hide their Jewishness and tell them not to tell people where they were born. If whilst they are Jewish they are in danger, I have to publicly ‘de-Jew’ them to keep them safe. This in turn is what many people choose to do, it is how Jews survive. This classic response to antisemitism is never counted.

How many Jewish people are not wearing a kippah on the streets that would like to? Jews that identify as Jews, know only too well what they can do and what they cannot. Places they do not go, things they do not say, flags they do not wave. Who counts the unspoken words of the Jewish people today, who counts the places not visited? Each in itself represents an antisemitic attack not reported. This situation is not unlike a crime ridden society locking up its daughters and having the government suggesting that due to the lack of reported attacks, the rape problem is under control.

In its 2014 antisemitic incident report CST list the total number of antisemitic incidents against students as just 19; I saw more than that in a month at a single university. Jewish students not wanting to make things worse for themselves do not say anything. Reporting in this fashion, implies there is not a serious problem when almost every Jewish student knows one exists. Many even choose their universities based on advice from within the community about where they are less likely to feel hostility. Hostility of course is not recognised as an antisemitic incident. Nor is going to a university further away from home because the one nearby has an over-active political Islamic movement.

All this of course and we have barely touched on Israel and the anti-Israel environment that exists on campus. A Zionist Jew (a Jew who believes Jews have a right to a national homeland just like everyone else), is a walking advert for attack, you can say what you like to him and almost nobody considers it antisemitism anymore. Bully him to the point of forcing him to leave and the university will just shrug its shoulders in resignation. When a BBC reporter responds to an antisemitic attack in Europe by bringing up ‘Palestinian suffering at Jewish hands’, the Jew can either suffer in silence or pack his bags and leave.

This of course still remains a choice. The Jewish person can always ‘not be Jewish’ or strike at Israel to avoid antisemitism. Not wear anything identified with Judaism, not open their mouths and to walk away or turn silent when the inevitable conversation starts. If there were rules to stop people overtly displaying their Jewishness, people would rightfully consider it antisemitic, yet just because the atmosphere alone creates the same outcome, does it really lessen the charge?

So the ‘enlightened world’ goes about its way, recording reported physical abuse of Jews as antisemitic attacks, and then measuring on an annual basis, whether the current climate has risen or dropped a point or two. Given the history, Jews have much experience in ‘going underground’ of hiding their Jewishness in response to a declining atmosphere around them. That antisemitism is measured in these statistics, that in some way this actually reflects or describes the true position of the Jewish community today, is a myth. It isn’t just about what they say to you, it is what you cannot say to them, that is the true level of antisemitism.